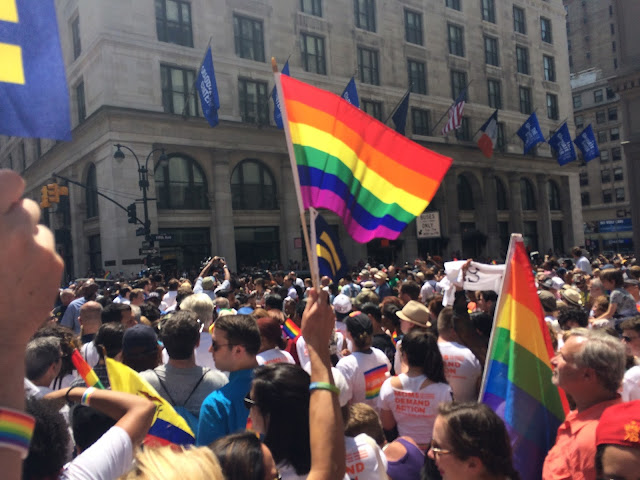 Growing up my dad was, for better or worst (worst. definitely worst), a hardcore, Evangelical, Republican, former US military, Southern asshole. Yes, I'm going to say that my dad was an asshole about his beliefs. He forced his beliefs on my family, would berate us for not living up to his ideas of how Christian or right wing or conservative we were. Right wing radio always played in the house. Christian talk radio played in the car. Opposing viewpoints were angrily mocked and often shouted down. Looking back, I think this played a major role in my parents divorce and definitely played a major role in my leaving Georgia and never looking book. I'm still not close to my family. My dad never beat us or anything terrible. He was just an loud, obnoxious asshole.

Those beliefs of his zeroed in on gays. He hated gays. Maybe it was because of the whole gays in the military or the beginnings of the culture wars, but he hated gays with a passion. Gays were perverts, child molesters, sinners, horrible people, deviants and unworthy of life. Yes, my dad was outspoken that the death penalty should apply to gays. Only gay men obviously. Transgender people never quite came into his world view (at least in the 90s). There was no need for distinction; they all unworthy of life. He even wrote anti-gay editorials, some of which were published by my local newspaper.

This is my background. This is where I come from. For years I felt a deep and abiding shame over the feelings that I couldn't silence. Every night as I laid in bed I prayed to God to make me a girl or wished for magic that could make it real and every day I hid my feelings deep down inside, as deep as I could cram them down. I had to. Lest my dad find out and maybe kill me. Lest the people in my Christian school beat the shit out of me. Lest I declare myself unworthy of love and life. That's how I grew up. Hiding who I was because everyone around me said that I was a pervert, a sicko, a deviant sinner who should be killed. I don't mean to start this so negatively, but that just goes to show how far I've managed to come and how far we as a society have managed to come.

This is why I cried yesterday as I marched down Broadway in New York City, just a few steps behind my state's governor and one of my state's US senators. I cried because I was me and I was able to walk down the street with major political leaders from my state, as a transgender woman, and not be ashamed or fearful. I literally walked down the street in a dress, in makeup, with the governor and a senator. And people came out to cheer and show their love and support. It was validating, legitimizing in a way that I can't even begin to describe.

I remember hiding my dressing from my parents and sister, always hiding. Even when I finally moved away, I remember hiding inside my apartment, afraid to go out as a girl. My heart would pound and I'd spend an hour just psyching myself up to leave my house for even a few minutes. And then yesterday, in the daylight, in a parade, I was able to celebrate who I am really am. And I was able to celebrate with everyone in my city! We stood together and celebrated life and freedom  and love. We mourned those we've lost.

While I've been to other pride parades, this was my first time actually marching in one. It was beautiful. It was hot. I was gross by the end of it. But it was beautiful. 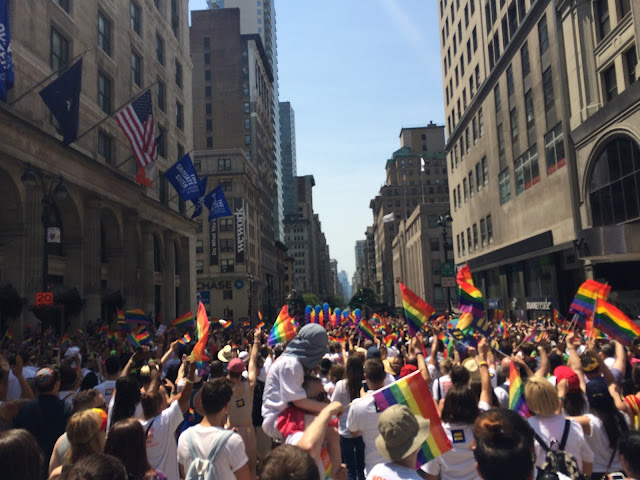 And honestly, it was pretty hard to get photos. Obviously I wanted to get some photos as this was something I really wanted to remember, but with the harsh direct light and moving crowd I didn't get too many good ones. Plus I also didn't want to be that girl taking selfies the whole time instead of celebrating LGBT pride. Also, I was sweaty and looked terrible. But, here are some good ones I snapped: 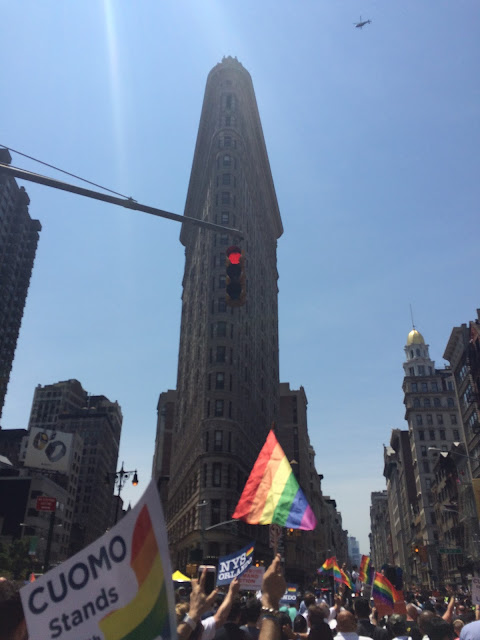 Near the Flatiron Building. 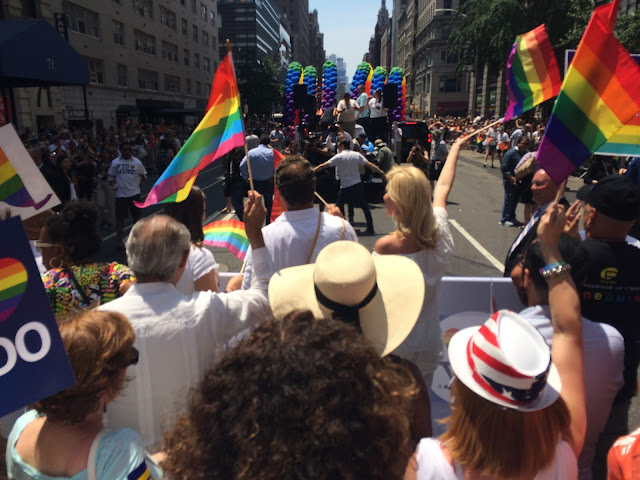 Our governor and Senator, and various other dignitaries. I forget who they were, though one of the funny things about marching in the parade instead of watching it is that you get to hear your contingent announced over and over again. 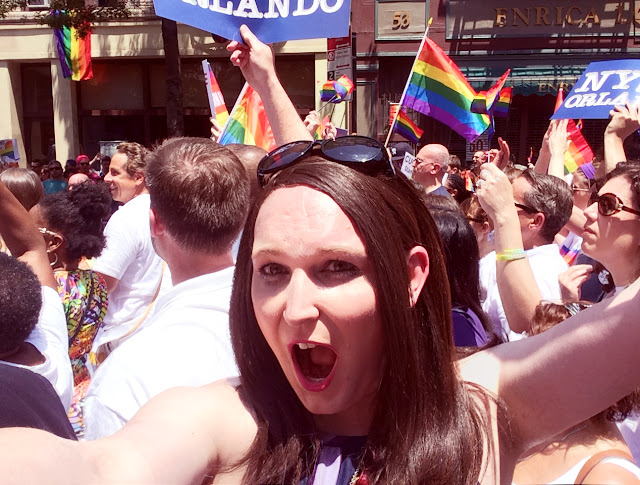 This is a terrible photo of me, but it's the best one I got of me and governor together. Yeah, like I said, it wasn't too great a day for photos and my mascara ran. What can I say, it was pretty hot. 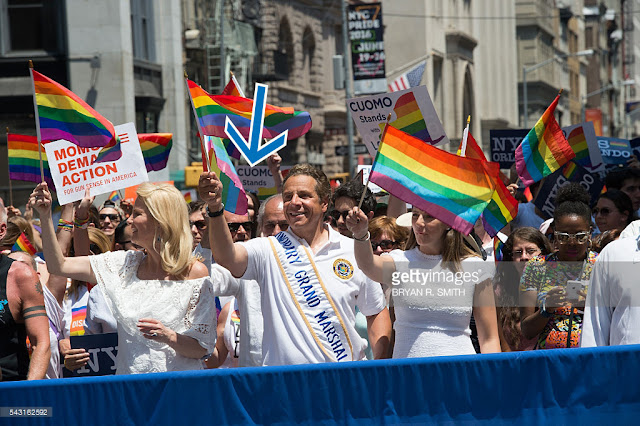 Also my partner was clever enough to spot me in this photo from Getty Images. I included a handy arrow for everyone who isn't quite as eagle-eyed. 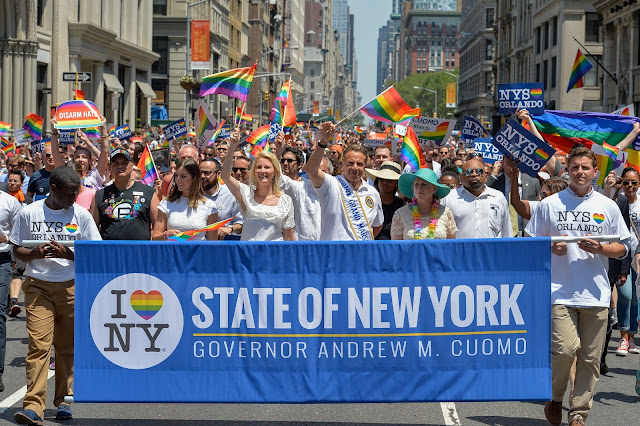 It took me a while to find myself in the above photo. But hey, check it out, the Governor of New York just posted a couple photos of Faith DaBrooke on his flickr page. Go me, right! 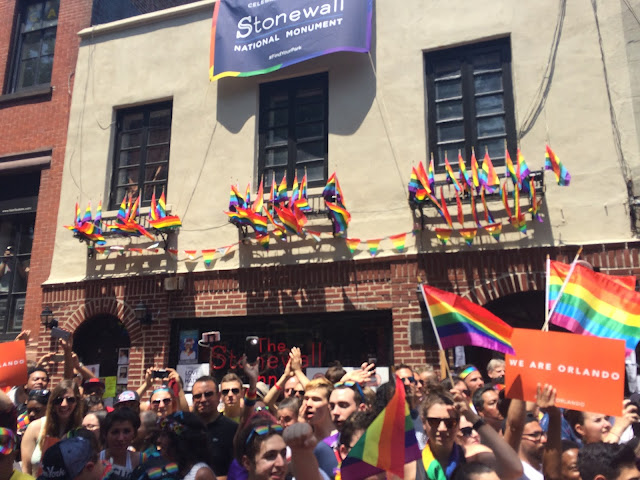 Stonewall Inn, now a National Monument! Woo hoo! Good for them. I love that it's a national monument and you can still just go there, grab a beer and play pool. You can't do that at George Washington's birthplace. 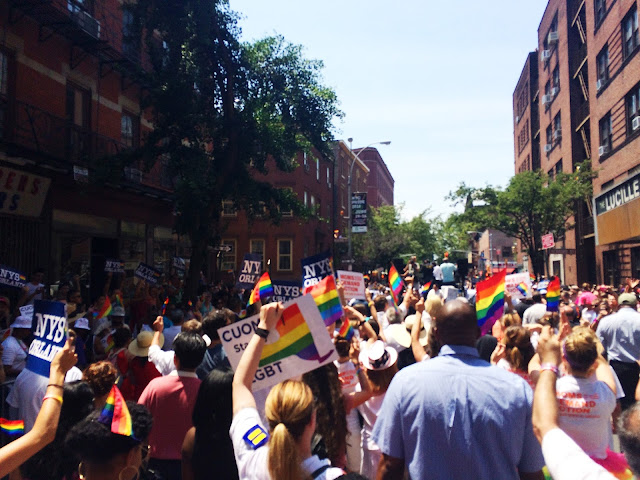 At this point in the parade, I noticed that the cheers suddenly got insanely loud. I figured it was because we were near Stonewall on Christopher Street. It wasn't until I got home that I realized that Hillary Clinton had joined the march. Our presumptive nominee, governor and mayor were just about fifty feet in front me and I didn't even realize! If I had managed to maintain my proximity to the governor then I might have managed a Hillary selfie! Ah well. A loss for me, but it's awesome that she came out to support us. Can you believe that she's the first major party nominee who's ever marched in a pride parade? Good for her! 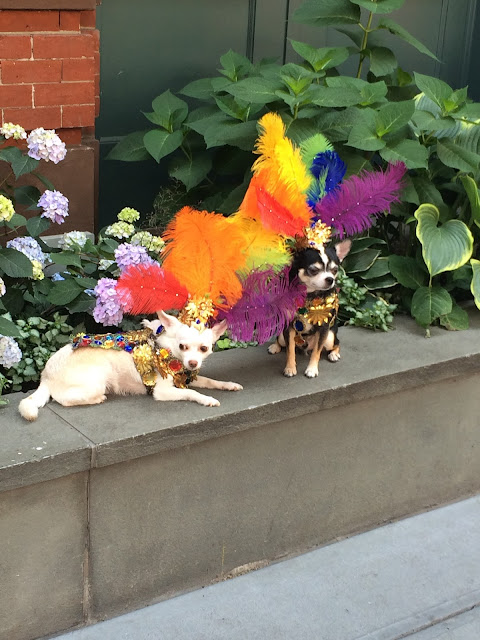 Right after I finished marching I needed water, shade, a bathroom and a place to sit. So, I found a bar nearby that wasn't too crowded and went in and had a pint and lots of water. And stopped in the bathroom to get myself cleaned up! Oh my gosh I needed it after standing around in the hot sun during assembly and then marching in the hot sun for the two mile parade route! Plus the bartender Emily was super cool. Will definitely head back there when I'm in the neighborhood again. 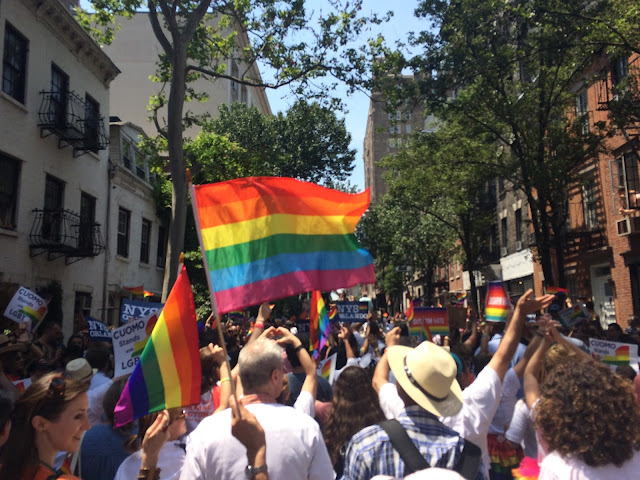 In all, it was an amazing day. Marching with the New York State contingent, something I was able to do because of my job, and having the governor and senator (and hopefully future president) march with me was an indescribable joy. LGBT people are not freaks or deviants or sinners. We're people and we can go out and celebrate our lives and our freedom and I'm so proud to be able to do that. No matter what happened in my early life, I was able to march down the street as me and I was not afraid, I was not shameful. I was proud of am I am and who we are as a nation and proud that we will win the future fights against bigotry. I cried tears of joy and it was all so beautiful.
Posted by Faith DaBrooke at 9:14 AM