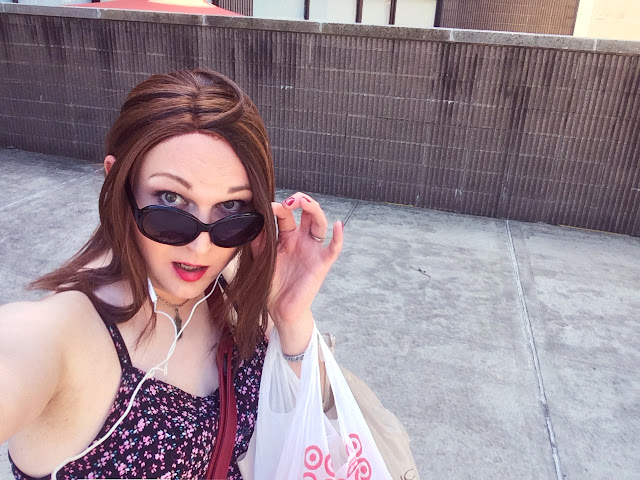 What's a girl in NYC to do on the first day of a week off of work? Well, the cliche answer would be shopping. Yes, I went shopping. Sorry to all you who wanted me to somehow break the mold and maybe study math or engineering or something. But, I had things I needed and stores that were selling those things and some Federal Reserve Notes that are exchangeable for goods and services, so shopping it is! See, if I'm going to be a girl full time, I really need some casual clothes.

Now, I'll be the first to admit that I'm not good at casual. In guy mode I'm super good at casual but at as a girl I want to dress up in a nice dress with perfect makeup, jewelry and maybe even heels. Of course that's a rarity for most women. Most of the cis women I know are jeans, T-shirts and yoga pants 24/7 unless they're going out with me, in which case they tend to dress up because, let's face it, I've raised the bar for women in my social group. If they're going to be out at the bar with me, they tend to step up their game. Who wants to be wearing yoga pants when the chick next to you in dressed to the nines? But alas, I don't have the energy to dress up 24/7 and I don't think it'll help me fit in either.

So, time for casual! My first stop was Banana Republic where I got some T-shirts and some basic black pants. Luckily I managed to find everything on sale, which makes me super happy. I was literally telling a trans friend of mine that I wanted clothes I could go grocery shopping in. Incredulously, she replied "Uh...that's all people ever wear." That pretty much sums up my need. 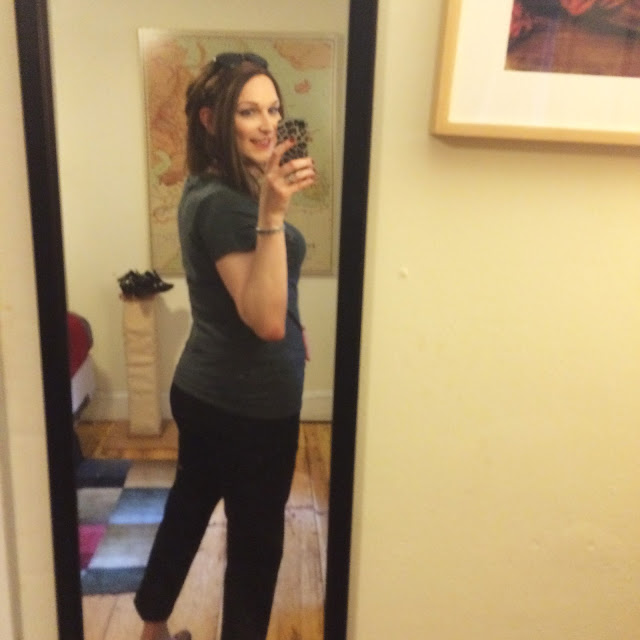 What I picked up were some Banana Republic Sloan Fit pants, which I thought fit pretty well.  Then I got some basic scoop neck T-shirts in a few different colors. Not crazy colors obviously. This is me we're talking about. I'm the person who once bought grey tights because, as I told my girlfriend, "they would add a pop of color to my usual look." My new purchases were dark green, grey and black. Almost colors. Here's the grey. 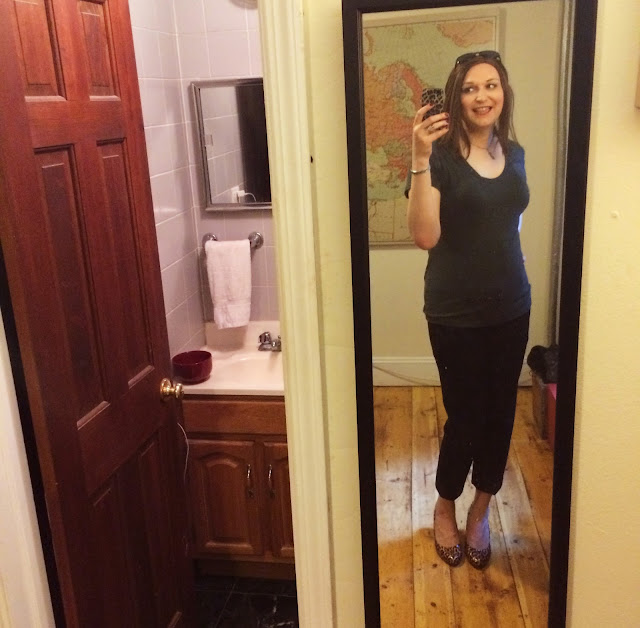 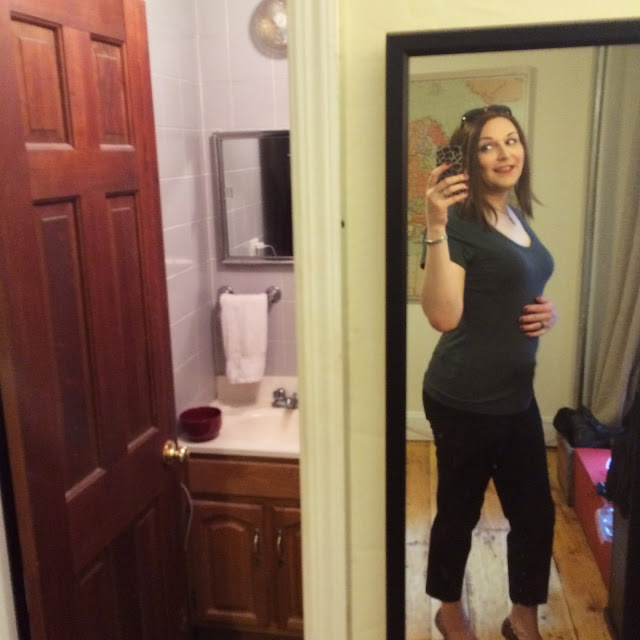 Also, I went to Target and got some fun stuff. Yes, Target. Honestly, I was slightly afraid to go to Target simply because of all the idiots hating on Target for their transgender bathroom policy. Now, I went to the Target in Brooklyn, so I probably wasn't that likely to run into many transphobic idiots, but I still feared getting clocked. Why? Because people shopping at Target might be thinking "Oh, Target, that store that recently took the right stand on LBGT rights. The T in that stands for transgender, I wonder if there are any transgender people in here....hmmm....hey! That person over there has wide shoulders and big feet. I bet she's transgender. Let's all gawk!"

So I didn't use the restroom. Actually, the real reason I didn't use the restroom there was because I didn't have to go. But I didn't use the fitting rooms either - for the reason that I didn't want to draw attention to myself. Fun Fact: As a transgender woman my main goal in life is not to attack children. Actually my main goal is to be invisible. I've even worried that my urine stream doesn't sound feminine enough, as though cis women in the stall next to me were straining to hear my urine stream, thinking to themselves "Hey...wait a second...that urine doesn't sound like it's coming out of a person with a vagina!" Yes, that's weird, but I can't help it. I'm just weird.

Also I didn't really want to try stuff on because I was there to get a new tankini! Yes, it's summer and this summer, dang it, I am going to the beach. Yes. I am going to the beach as a woman. Okay, I must admit that I don't yet have a bikini body. Maybe one day I will (fingers crossed), but right now I don't. Luckily through, the tankini is a little more modest without fitting weirdly or feeling dowdy like a one piece. But, it turns out, that it was okay that I didn't need to try it on at all. Once I got it home I was super happy with how it looked! 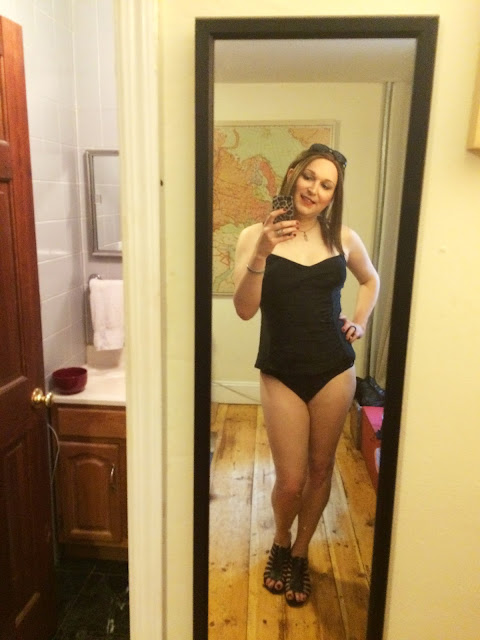 And yeah, I got black. It's funny, because I recently watched the movie Brooklyn, wherein Saoirse (pronounced Ser-shuh) Ronan's character Eilis (pronounced Eee-lesh) tries on a swimsuit and is told that she shouldn't get black because it doesn't work with her pale skin. And I'm like what? Black doesn't work with pale skin? Says who?! Either way she gets green.

Now, I unfortunately can't be quite as cute as Saoirse Ronan, but I'll blame that on me buying the black anyway. Yes, that's the only reason, literally the only reason why I'm not as cute as a movie star. Yep. 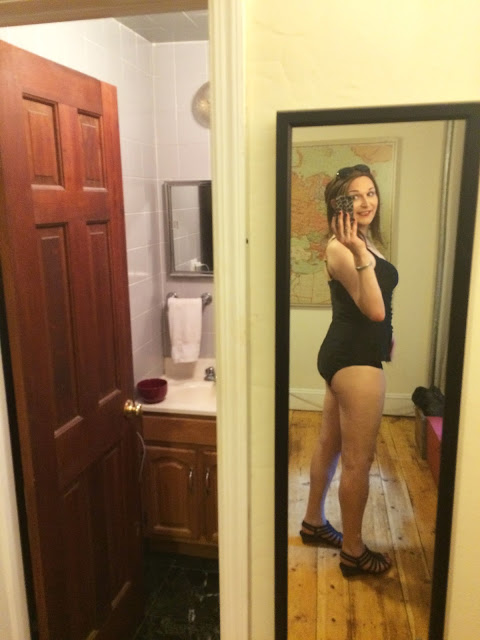 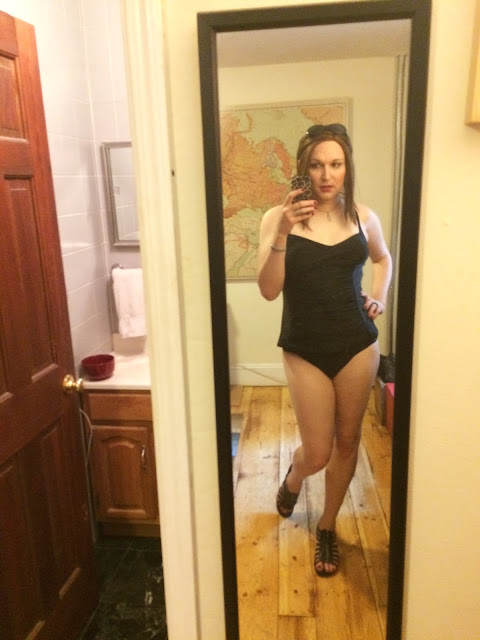 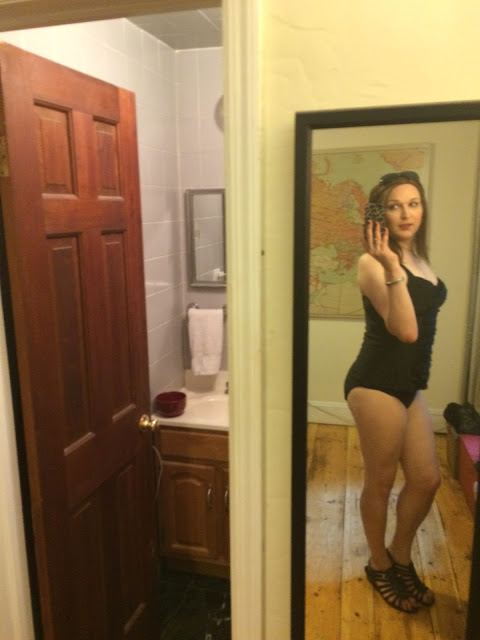 As avid readers of my adventures are already aware, literally the day after I went shopping, my friend texted me and invited me out with her friends to the beach. It was like fate! As nervous and exited as I was though, it ended up being too cold and windy to go to the beach. Stupid 60 degree June days! I thought about trying to at least lay out in the park or something, but my schedule was already too full. Ah well, I'll go to the beach later. That is my plan. July, I'm looking at you. I've already got my suit ready! 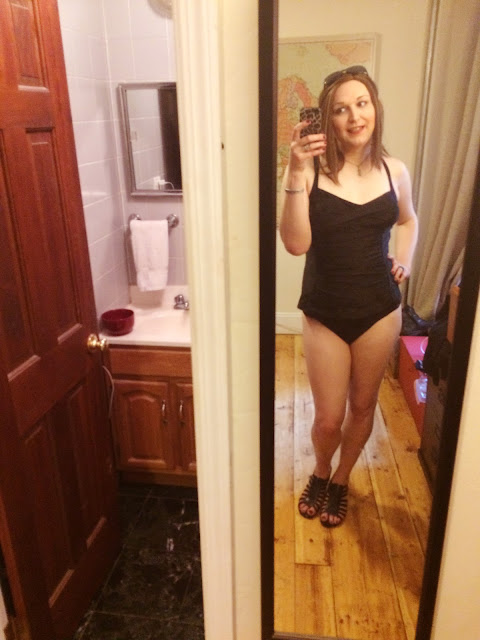 Posted by Faith DaBrooke at 9:46 AM