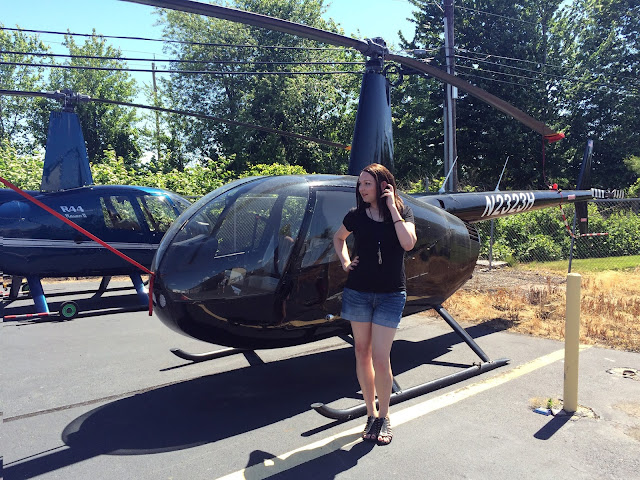 My partner has a philosophy for life and that is this; experiences are more meaningful than things andevery weekend you should feel like you're flying. It's a philosophy I've also come to embrace and it's led us to some pretty cool adventures. We've been zip lining, rappelling, roller coasters, sky diving and more. But honestly, where do you go from there? You learn to fly a helicopter, that's how. So that's what I got her for Christmas. A helicopter flying lesson. And because I wasn't gonna just sit there on the sidelines and watch, I got myself a lesson too!

Now, you can't walk five feet in Lower Manhattan without getting offered a helicopter tour. There are thousands of these annoying guys in their orange vests, offering various incredibly overpriced tours. If you visit NYC, don't deal with them. Your actual Statue of Liberty tickets are for sale in Castle Clinton. And plus you can take the Staten Island Ferry and get a pretty good view of Lady Liberty as well. And their helicopter rides are are just rides. You don't even get to fly!


We were determined to actually fly the helicopter. Because we didn't want to go in the dead of winter, we waited until spring to book our tickets. We selected a weekend day in May when the weather would presumably nice enough to enjoy being out. We were excited and all set to go when I got a text the day before cancelling our flight. It seems that President Obama was speaking at the Rutgers graduation and all the airspace around it was close off for commercial flying. Thanks, Obama!

So we rescheduled. This time to June. Patiently we waiting but at the appointed hour no cancellation came! The President was to be nowhere near us so we could fly in real helicopters! We got up early, took the Jersey Transit train out to Linden and then took at Uber to the airport. We found our spot. It was a beautiful day, no hint of rain or clouds and we were ready to get up in the wild blue yonder and pilot our whirly birds! 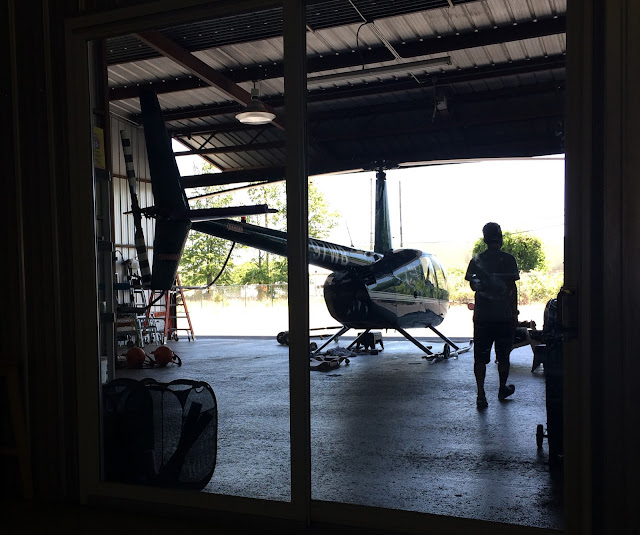 First we sat down, filled out some liability waivers saying we wouldn't sue them in the rotor blades tore our heads off like they're always doing in movies. Then we got some basic lessons on how the helicopter worked, what each control did and what we were absolutely not supposed to do if we wanted the helicopters to stay in the air. Not crashing and dying is important to me so I paid attention.

Then when it was finally over and we were ready to go up, they told us to wait. The pilots and instructors were all huddling and discussing things. They didn't look happy. Finally, after a while, they came back and said we could go out on the tarmac and take some pictures with the helicopters. That didn't bode well. But, hey, I love pictures. So take pictures we did. 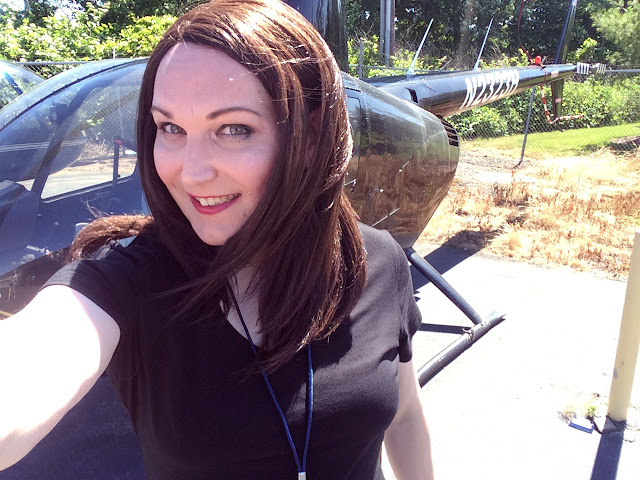 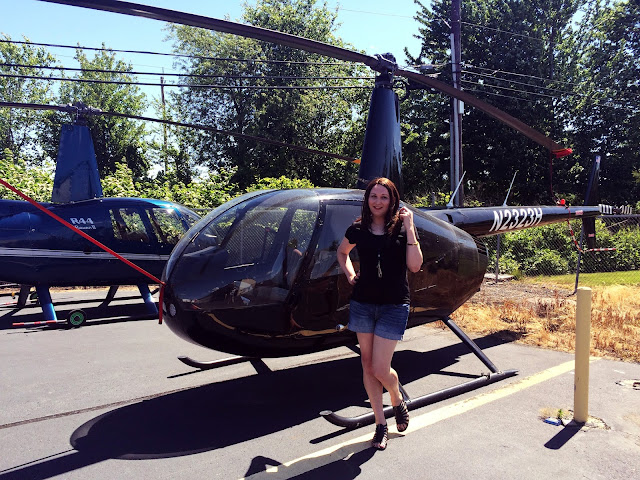 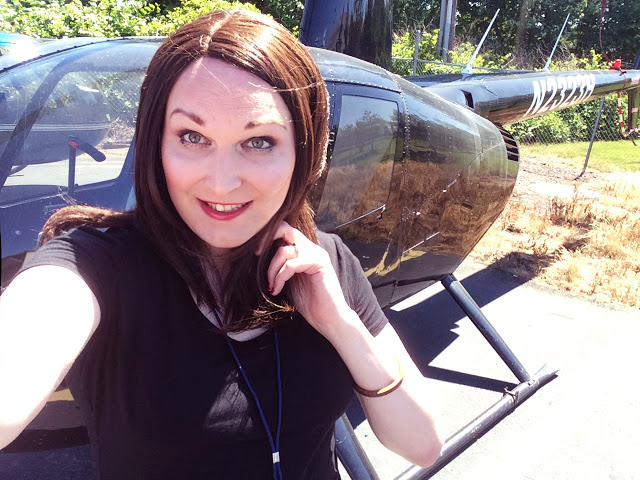 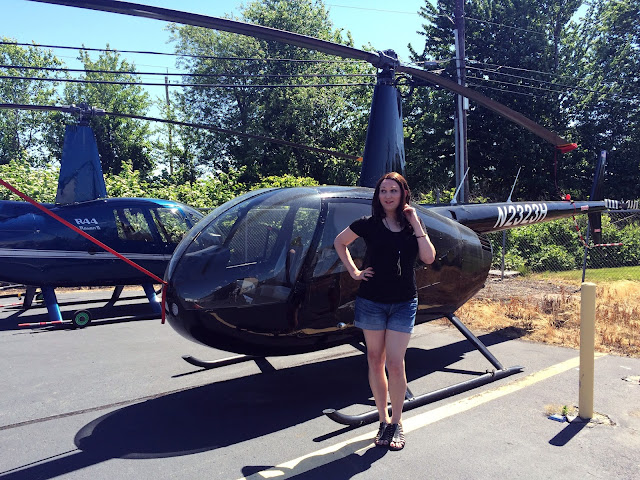 Finally, after about another forty-five minutes, they brought everyone back into the hanger and said that it was too windy that day. My stomach sank, but I had to admit it was pretty darn windy. something like 90% of my pictures had come out crap because my wig was blowing around crazy and looked bad. It was seriously windy. Apparently, it was so windy that they'd decided that we were not allowed to fly the helicopters. It would be too dangerous to let us actually take the controls. Plus, they worried that, for newbies like us, air sickness was a serious possibility.

They gave us a choice; we could go up in the helicopter, but not actually fly it, or we could reschedule. It took a while to decide. I mean, for one we had come all the way out to New Jersey, a whole nother state! We'd waited for like two hours. We wanted something for our time and effort. Maybe just a helicopter ride would be okay? What if we rescheduled and they cancelled again? What if we just had to keep rescheduling in perpetuity?

It took us a while to decide, but in the end, we figured that if we wanted a helicopter ride, we could just head down to the Battery and get a ride. No, we didn't want that. We wanted to fly the helicopter ourselves, actually control the stick and be pilots! I wanted helicopter pilot selfies, dangit! 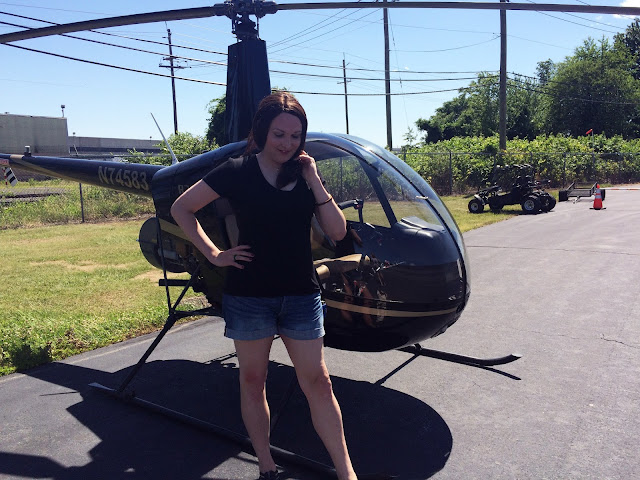 So, we've rescheduled. Stay tuned...because I intend to have some serious helicopter selfies soon!
Posted by Faith DaBrooke at 4:09 PM