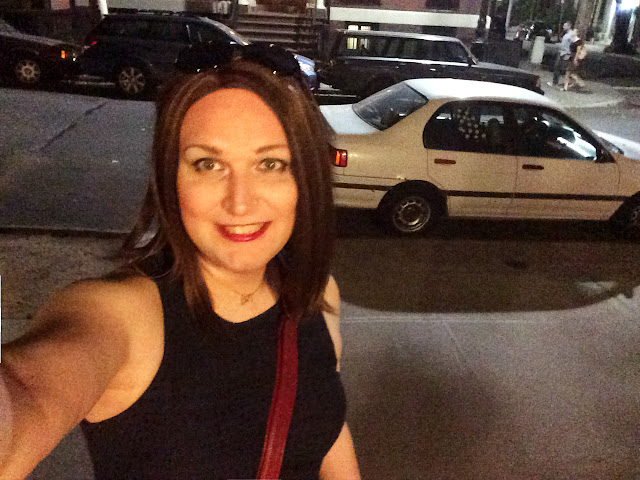 There are, I think, levels to being out in public. At least in my experience. There's out to the mailbox, there's driving in your own car but not getting out, there's going to a gay bar. Then there's the more advanced levels - levels where you're not just out in public. You're out in a big crowd with lots of people who may or may not smile upon gender variance. Those are the times I feel most vulnerable.

Years ago in Queens, I remember the first time I went out to the huge beer garden in Astoria. It was full of douch bag frat boys fresh from Murray Hill or Long Island. Not generaly my favorite crowd. When I rode the Staten Island Ferry a couple years ago I remember being pushed into a large crowd as we boarded. As I got squeezed into tighter to fat tourist families from Iowa, Hasidic Jewish families and lord knows who else I thought to myself "This is literally the most 'in public' I've ever been out." Then the airport topped that. Maybe a White House press conference could top that. Or a TV appearance. That's probably about it.

This June, I decided to take a week off of work, just because I had a lot of vacation time saved up and wanted to use it when it was nice out. My initial thought was that it'd be a great opportunity to spend an extended period of time in girl-mode. And of course, that would mean lots of time out in public, often in some of those more vulnerability-inducing situations. In fact, I managed two of those situations on my first day; crowded public transit and a crowded beer garden full of bros and hip hop guys with baseball hats. The sort of places where a transgirl, even one comfortable with being out, sometimes fears to tread.

Before my vacation started, I'd picked up a couple of fit and flare dresses for summer. I figured I'd need some more casual looks if I'd be girling up every day. Not that I've ever been that good at casual looks. So, one was an indigo cotton eyelet dress from Gap, which you can see below, and the other was a similar dress in black, because I love black. 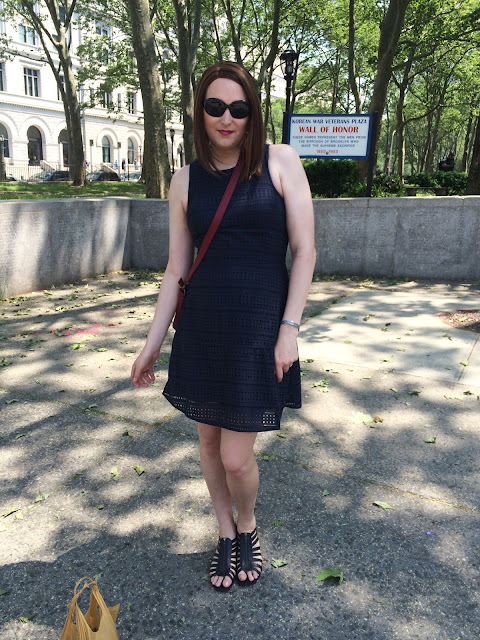 Honestly, I do like the fit and flare dresses and they are super comfy and nice for summer. But the only problem with them is that they really look best on tiny, skinny girls. I may be many things, but sadly tiny and skinny are not among my qualities. Ah well, even if you can't be super skinny like a model, it's still so much fun to rock a comfy dress on a nice day.

And speaking of comfy, the other items I got were a new maxi skirt and some T-shirt tops from Banana Republic. They were in the clearance rack so I managed to snag them super cheap. And let me just say that I am absolutely in love with the maxi skirt as a concept. They are insanely comfortable. This one below has actually started replacing my usual yoga pants for my evening comfy wear.

The item below I first wore out a barbecue at a friends' house and had a great moment. A friend of a friend, upon meeting me, remarked excitedly "Oh my god, you're tall too!" It was a nice little passing moment. Upon first meeting me her first thought wasn't "You're a dude in a dress," but rather "Here's a woman just like me." It made me so happy. Then we sat down, had drinks, and her and I talked about Star Wars all day. I totally want her to be my new best friend!

For those who may not be aware of the Brooklyn bus schedule, the B38 is a handy way to get from the government office and courthouse heavy Downtown Brooklyn to the wild, new hipster gentrified and restaurant/bar heavy Bushwick. This barbecue was actually in Bushwick, so we had to take the bus to get there. This is not one of my favorite things.

Sure, I've ridden public transit as a girl a thousand times, but I'll never like it. First of all, you're thrown in the mix with everyone. And generally you have to either stand up, thus putting you out in the middle of the car making it hard to just blend in, or you sit down on a more empty car, right across from people who are looking right at you. Plus it's such bad light on a subway. I try to mind my own business, I try to read a book or play on my phone, but I swear sometimes I catch a look. Like someone is looking at me and clocking me. Or giving me that look like "what a weirdo." Maybe I'm imagining it. I don't know. But I hate transit. And I haven't even mentioned my fear that a group of teenagers will come on the train. Luckily, it's been a long time since I've had to deal with teenagers. 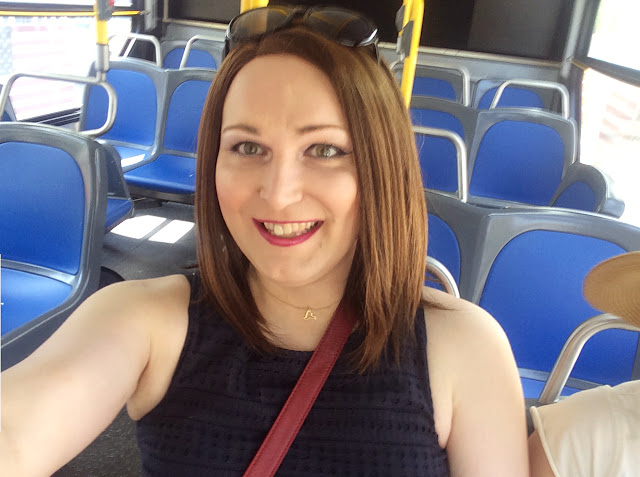 In the end, the bus ride was fine. Sure, a couple families with lots of loud, small children came on. But they sat behind us and didn't bother us at all (except by being loud obviously). And on the bus you can sit and not accidentally make eye contact with people. Plus when the light is good you can take lots of selfies. 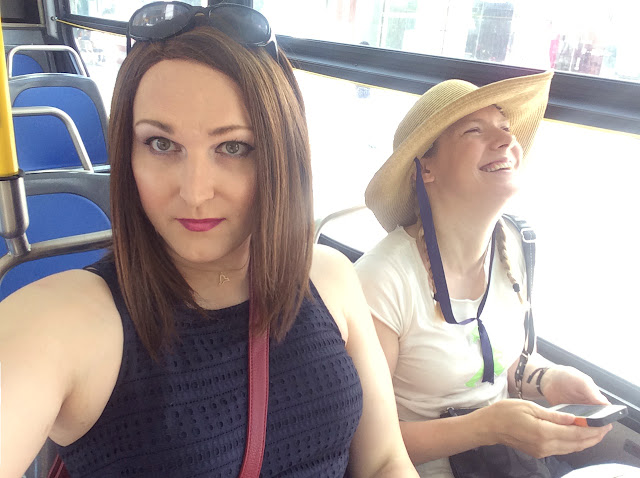 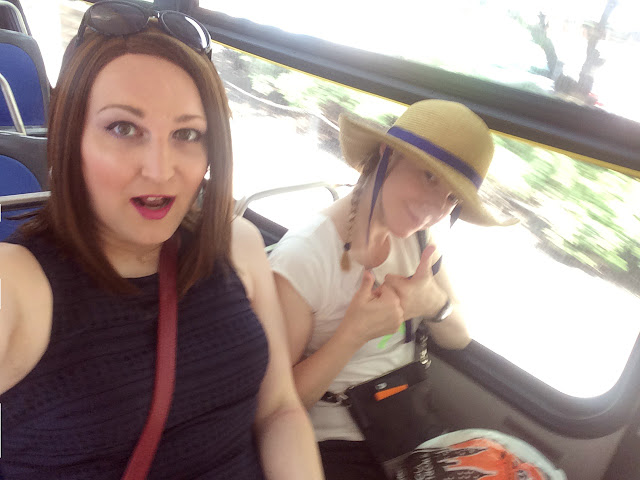 We ended up at Greenwood Park, a beer garden in the neighborhood of South Slope. We'd been there before on a random afternoon day and it was really nice, with good food, good drinks and a nice open patio area with lots of tables. So we decided to head back there and maybe even make it a regular place to hang out.

Unfortunately this time we went there on one of the first nice weekend days of summer. It was insanely crowded. When we showed up around 7pm or so, every outdoor table and most of the indoor tables were taken. So, we stood with our drinks. I'm always weary of standing in a situation like that. Will I be too tall? Will I stand out? Will I attract attention? Especially with the crowd how it was.

Now, I try to not be judgmental with people. But, I've generally noticed that certain groups of people (I'm looking at you, groups of men and groups of teenagers, and groups of builders) tend to be less appreciative of gender variance than others. And you know, it's funny. It's always groups. If someone is going to make a comment, in my experience, it's because they're in a group. It provides insulation for these people like a castle for jerks.

Luckily, no one bothered us at all and I didn't even feel like I got any weird looks. So either I'm passing well enough or maybe people are nicer than I give them credit for. Either way, all I really want to do is blend in. That's all. And thankfully I was able to blend in, even on public transit and even in a crowded beer garden. That's a good feeling. 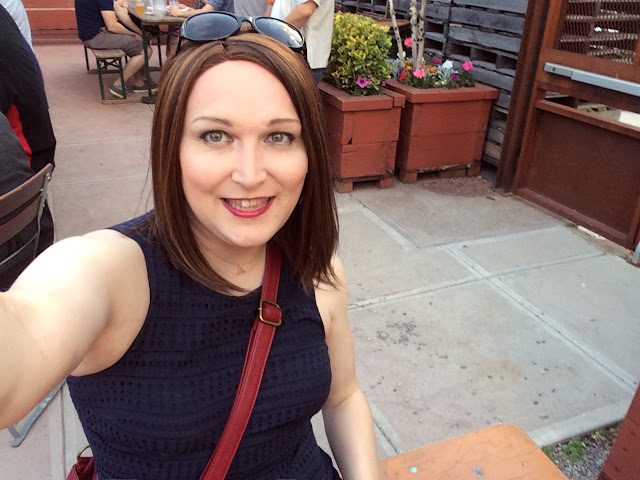 As it got dark, the bar turned on strings of lights overhead, which actually produced some really nice diffuse photo light. So I figured I'd snap a few more photos while we waited for the car service to pick us up and take us home. 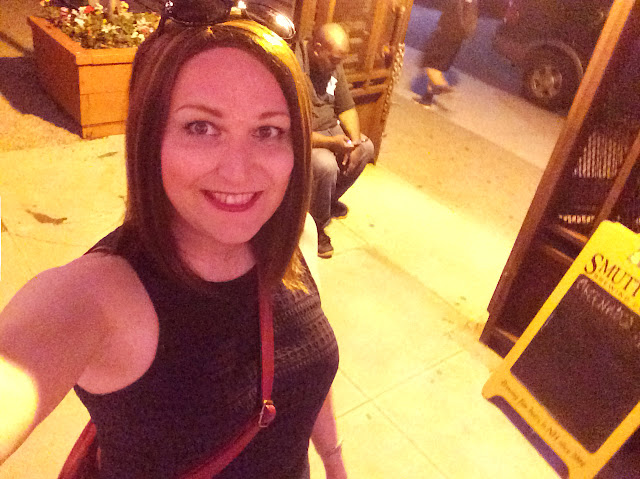 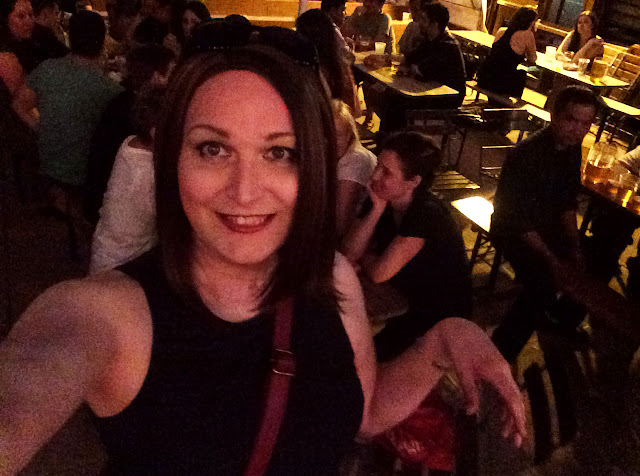 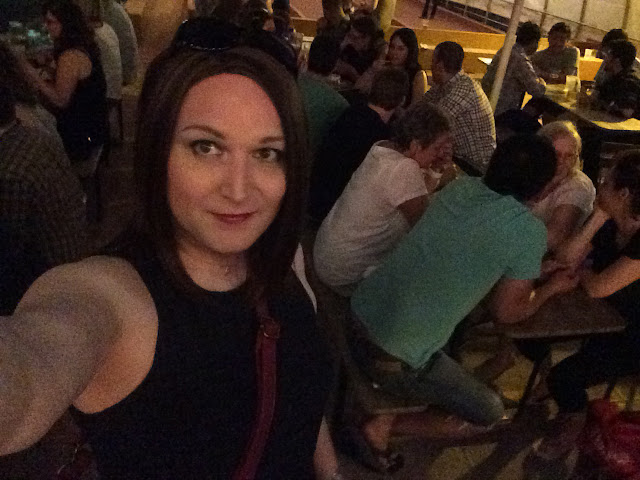 After we got back into the neighborhood, I stopped along the Brooklyn Promenade for some quick photos, happy that my first vacation day and girl day had gone really well. Of course, there were lots of fun plans running through my head for the rest of my time off. There's so much for a girl to do in this amazing city! 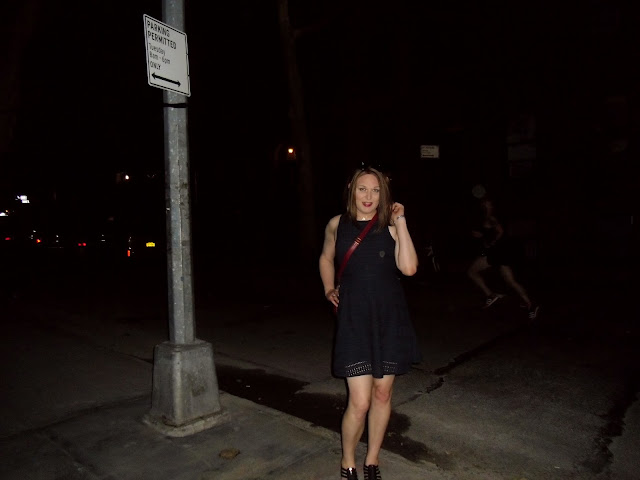