My First Trip to the Hair Salon

You know, I hate wigs. I really, really, really hate wigs. They're hot, itchy and delicate. When they mess up they look insanely awful and they tend to get messed up pretty quickly. I've tried serious quality, I've tried what the YouTube tutorials recommend for maintenance or de-tangling and tried plenty different products. And still wigs are awful and stupid and I hate them, hate them, hate them. And I'm still stuck with them.

And now that I'm full time I'm really stuck with. Like every day stuck with them.

But there is hope.

The reason I don't have my own long, beautiful silken locks is because of my hairline. My hairline receded a little bit, starting back when I was 16. It only receded just a little bit, but it was enough to make me panic. I fretted about looking old or losing my hair and eventually shaved it it all off. Better to have the shaved head look than be bald right? For the better part of a decade or more I sported this look.

It worked for me for a while, but sadly it meant that when I decided to transition, I wouldn't be starting with nice long hair like some people have. Instead, I'd be growing my hair out from scratch. That was about a year ago. It's getting long, but even with drugs and hormones, my hairline hasn't really improved. I worried that I'd be cursed with wigs forever. When my partner and I talked about my then-pending transition she pointed out that lots of cis women wore wigs all the time and I'd do fine. But I decided, I didn't want to transition if it meant wigs for the rest of my life. I'd rather live as a guy with dysphoria then as a woman who had to wear a wig every day to pass. Yes, I really hate wigs that much.

As I approached full time, I decided I'd give my natural hair a shot. It was, after all, getting kinda long-ish. I figured I'd make a hair appointment and see what a professional could do with the hair I did have, short though it may be. Luckily for me my laser place shares space with a hair salon, so before my most recent laser, I called ahead and asked if the stylist could do me a quick consultation. I wanted to know if there were anything that could be done or if my hair was just hopeless. 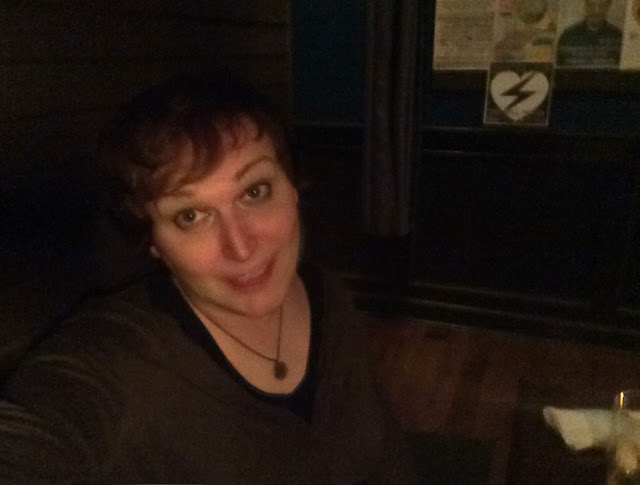 The stylist is a cool lady, in her late thirties or early forties, kinda a little punky with dyed red hair and Betty Page bangs. Plus, she was bubbly, upbeat and unflaggingly positive in a way that helped me free more relaxed. I explained that I was trans (because I was in boy mode at the time) and wanted to know what a professional could do to make my hair look okay and hide my hairline issues. Like I said, she was positive she could manage such a task, and so I made an appointment to come back the next day.

This was the Friday before I came out full time. And knowing that I would likely come out of the salon with something of a feminine haircut, I figured I'd head over in girl mode, but wigless. I think it was my first time trying it. I brushed all my hair forward to do a kind of emo teen look, which sort of looked okay. It didn't look super feminine, but it was hopefully enough that I didn't look super ridiculous.

My hair appointment started with her explaining that she was going to trim the back to make it look clean and nice (and not scraggly like a mullet) and then trim it into a sort of pixie cut for me. Yay! A pixie. Back in March, I wrote a piece about short hair, and wondered if I could in fact pull off a pixie cut. Well, I was about to find out.

First up was the hair wash, which ended up being done by the super cute hair apprentice I guess. Is that a job? She had a perfect looking bleached blonde pixie herself, perfect makeup and was skinny in the way that only twenty-two-year-olds can be. I was super jealous of her and felt somewhat ridiculous in comparison. This happens to me sometimes. I see a pretty girl and get really jealous, then feel bad because I'm a giant, oaf of a boy in comparison and I have a stupid hairline and big honking feet. Well the hair apprentice was nice and friendly and I bet she feels jealous too sometimes.

After my washing, I headed back over to the other chair and the stylist started her work. It didn't take long, but she cleaned up the back by my neck, evened out my bangs and gave me some tips and tricks to make my hair look good. The key for me is chaos. It's true. Messy works really well for me now. Also, messy gives me body and body is really good for my look too. I learned what a teasing comb was (it's the opposite of what you want with a wig).

Well, apparently I have great hair with lots of body, which is fantastic and makes me super happy. Once it grows out I can do a nice look with bangs and curls and make it look great.

The other upside is that in about three or four months I'll be able to get a style that definitely looks 100% feminine instead of being kinda androgynous. And my hair will be long enough for extensions. That'll be just in time for warmer weather. And then once I have that style, I can take every wig I own and burn them! Except I probably won't actually burn them because I bet the synthetic fibers probably give off all sorts of nasty fumes.

After my hair appointment, I texted a friend who lived nearby the salon to see if she wanted to go out for a late afternoon drink. She did. So I went out in Brooklyn, to what turned into a couple drinks and then dinner when my partner met us after she got off work. And I didn't wear a wig! I just wore my own hair and it was wonderful. It really felt great. Even though it's not quite feminine enough and even though the longer hair helps me pass better, it felt good.

Well for now, I'm sitting here writing...one year and three days on HRT, a couple weeks of living full time and being a working woman in the city, and I'm still wearing the wig. But, soon I won't be. That'll be nice. That'll be a wonderful, beautiful moment in my life. Because the wig still kinda feels like "dressing up as a girl" rather than just being a girl. Once I say adios to the old store bought wigs there'll be no more dressing up. There were just be me, a girl, living her life. 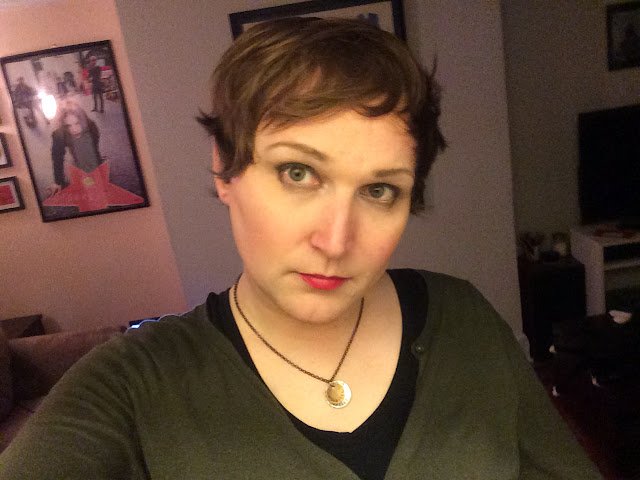