It's been a long while since I had real, actual, long hair. Really, it's been since high school. Back in the 90s I had shoulder length hair. It was dirty blond with a good amount of wavy curl, but not crazy curls like a ramen-noodle hair. Shortly after moving to NYC, I decided that it was time to get rid of my hair and shaved my head. The look worked for me well enough that I just went ahead and kept my head shaved for the next decade or so.

Now, though, I'm starting to grow it out again. It's exciting because, as I've said, I hate wigs and can't wait to have my own hair. But it's also exciting because back in the day I lived with my parents, and even though I could grow my hair long, I was never able to actually style it. Sure, a couple of times I would dye it a little reddish, maybe even a little purplish, but I could never actually go full girl with my hair. I could never go a salon and get it really cut and styled into a super cute look. There were times in the late-90s that I dreamed of getting my then-long hair cut, dyed and styled to look like Willow's in Buffy the Vampire Slayer. 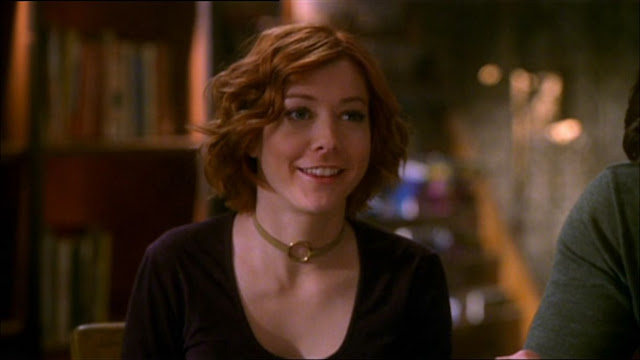 Sadly that was not to be. Though I bet I would have looked super cute. Instead, I mostly just let my long hair sit scraggly on my head because at the time it was the 90s way to do it. So instead of looking like the lovely Allyson Hannigan, I looked more like a low-rent Kurt Cobain impersonator. Back then I was scared that my parents or someone that knew my parents would see me and the trans-shit would hit the fan.

Luckily now I have the freedom to have my hair done however I want. Unfortunately, now I don't have the hair! But, nano-meter by nano-meter that's changing as my follicles push out more keratin. Right now I've got a small amount of hair atop my head, and firstly, it's nice to know that none of it is grey. It's a normal short guy's haircut.

In a few months, however, it'll be longer, so I'm starting to look into some short haircuts that might work for me. A few years back I found a short blonde wig that worked pretty well for me. At the time I was a little skinnier and it managed to fit my face quite well. I thought it was a pretty good look for me. 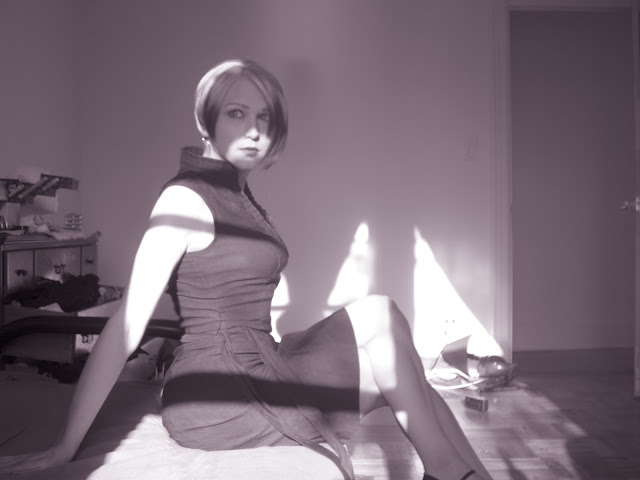 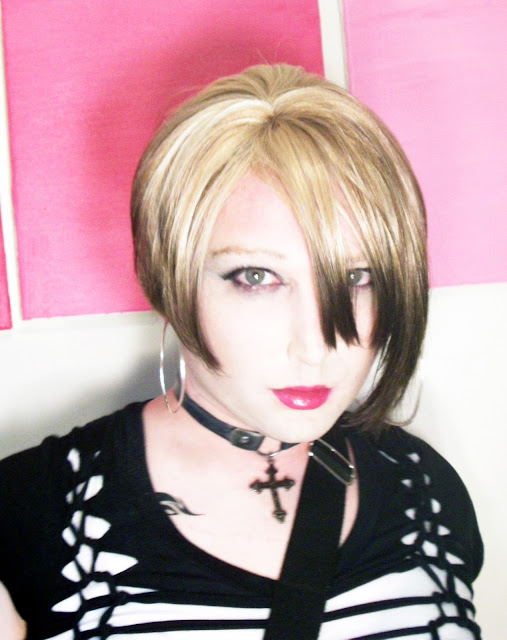 In a few months, however, it'll be longer, so I'm starting to look into some short haircuts that might work for me. A few years back I found a short blonde wig that worked pretty well for me. At the time I was a little skinnier and it managed to fit my face quite well. I thought it was a pretty good look for me. Now, initially, my regular hair won't be quite so long, but I figure that I can start getting toward something like this longish bob hairstyle.

Recently, on a snowy blizzard day, I sat in and binge-watched Ascension on Netflix. Besides the fantastic clothes (such beautiful retro dresses), I really liked Lauren Lee Smith's character's hair cut. Also the show was fairly good too (though I wasn't a big fan of the ending - email me if you'd like to discuss). 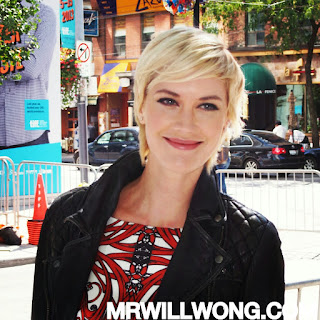 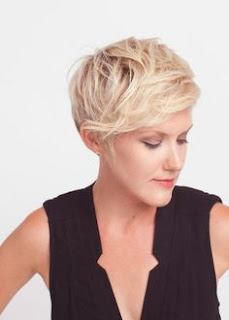 She's fairly thin, which I think helps in pulling off a stylish crop style. Also just being pretty. I'm currently working on both aspects of that, though it's taking a lot of work. Lauren Lee Smith pulls it off really well and I only hope that as a transgender woman I can look half as good, especially as I age. I mean, I don't want to look like some middle aged woman before I'm even middle aged. Speaking of women who have aged quite well...

Say what you want about her politics, but Megyn Kelly always has great hair. Plus she manages fantastic makeup even with a seriously hooded eye. Plus did you know that she had the flu during the first Republican debate last year but kept going like a consummate professional? Okay, maybe I need to add her to my list of female role models and include her with Shirley Manson and Kristin Ritter. She can rock a black shift pretty well and she's tough as nails and smart as an owl (owls are smart, right, or is that just in cartoons). Anyway, she recently went to another short, cropped blonde cut that she pulls off fantastically. With some heavy growth on top and the right stylist, I might just be able to pull off that look too. That's the goal anyway. 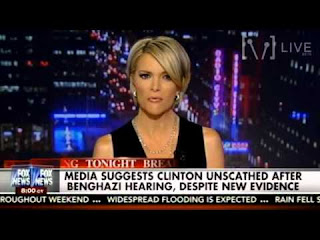 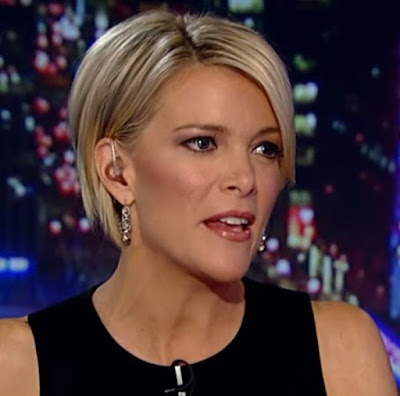 Lastly, the question becomes, what if I don't want to be blonde? I mean, I've been blonde plenty of times, but my natural hair is brunette and I think I look great with darker hair. Can I pull off a darker, short hair style? Hopefully.

Jena Malone is one of my favorite ancestresses, and she's mangaged to look super cute with short, regular brownish hair like mine. 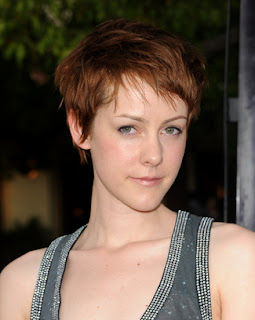 And of course Winona Ryder has always looked amazing with her trademark short dark hair. 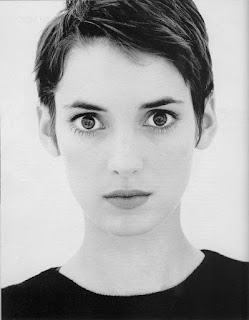 Luckily, I think my natural features tend to be a little bit on the feminine side; larger eyes, smallish-chin, good cheek bones, arched brows, so maybe I can pull off the short hair. Now, I'm not Winona levels or pretty, but I'm better than say, Dolph Lundgren or Danny Trejo or something. So ultimately, I'm hopefull.

For the past 12 years or so, my head has been shaved, Right now, my hair's growing and hopefully filling in a little bit more in front thanks to the spiro. Every day, I look at it in the mirror and hope I'm not imagining it coming in. Luckily, my hair is thick (well, were the male patterned baldness isn't affecting it), my hairline isn't really as bad as I thought, and my hair hasn't gone grey at all. It's thick, lustrous and slightly curly. Once it grows out it'll be fantastic hair. I'm hoping for Liz Gillies levels of fantastic, but we'll see.

In the mean time, I'm seeing my doctor this week and want to ask her about it. From what I've read, propecia is basically the same drug as spironolactone, so it's probably not worth it to add another drug. Maybe she can just up spiro dose for me. And maybe in the next few months I can start rocking a cute, short hairstyle. Maybe I can even have it styled professionally for my good friend's wedding which is coming up in June. That'd be fun.

Hair is my last real obstacle before coming out full time. Well, hair and courage. I'll keep trying to do my best on both. 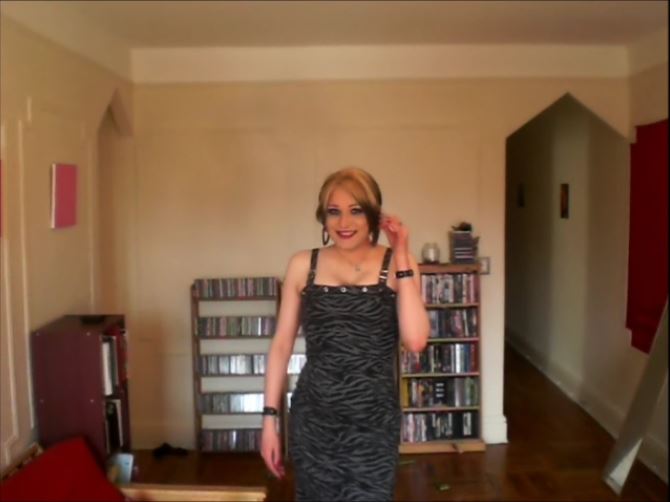 Posted by Faith DaBrooke at 7:07 AM