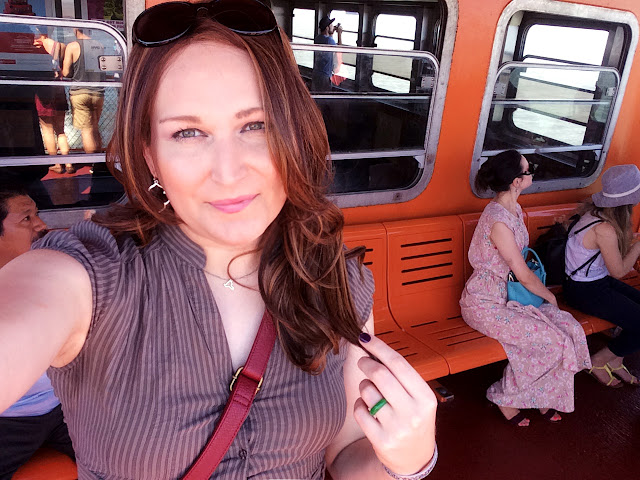 Summer is starting to wind down but there's still plenty of time for summer adventures before autumn adventures begin. As any of you probably know, I do a podcast with my partner. But many of you may not know that my partner is a veteran podcaster and has several podcasts of her own including ABC Gotham. Recently she did an episode on Snug Harbor. You should totally give it a listen because it details some pretty interesting background about Snug Harbor. Especially interesting are the murders. Seriously, give it a listen.

Snug Harbor was founded in the early 19th Century as a home for aged sailors. It's composed of 84 acres of land on the northern coast of Staten Island in NYC. For almost a hundred and fifty years retired sailors made their home there in a time before Social Security or other safety nets for the indigent. Now that it's no longer a home for sailors, Snug Harbor is now a cultural center with multiple gardens, museums and even a hedge maze!

Needless to say we've wanted to go check it out. A Sunday in August seemed perfect. After all Staten Island is just a ferry ride away. 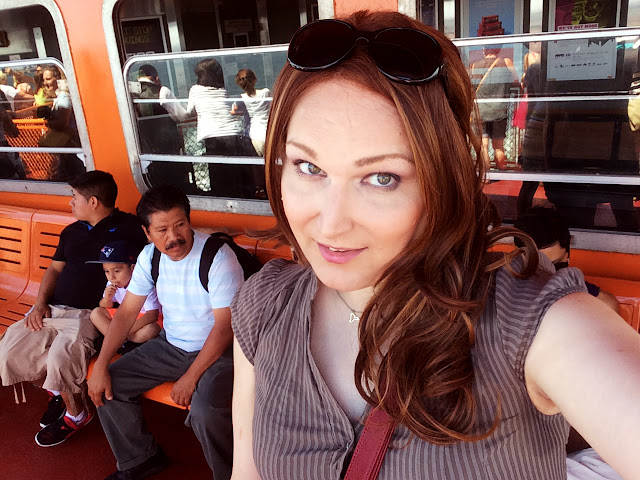 I realized that trip was literally only my third trip on the ferry to actually go to a destination in Staten Island. Every other time I was just riding the ferry over to the other terminal and then riding it right back.

If ever you visit NYC be sure to take a ride on the Staten Island Ferry. It's free and it takes you right by the Statue of Liberty. Plus you get some amazing views of Manhattan, Brooklyn and the whole harbor. It's fun.


Our first stop was the museum. We actually skipped the Staten Island Museum (we'll have to go next time) because we wanted to learn more about Snug Harbor more specifically. Okay, we're history nerds and especially New York City history nerds. 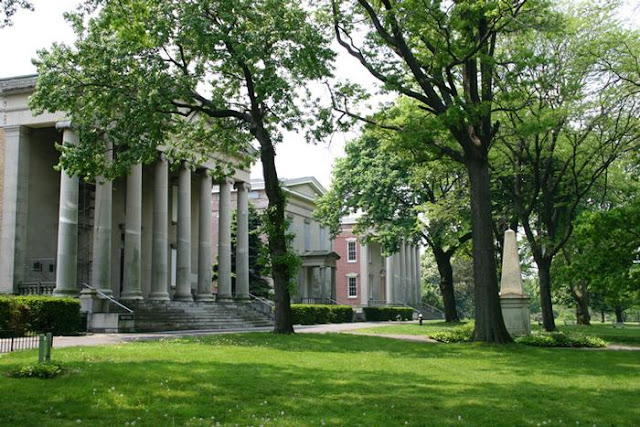 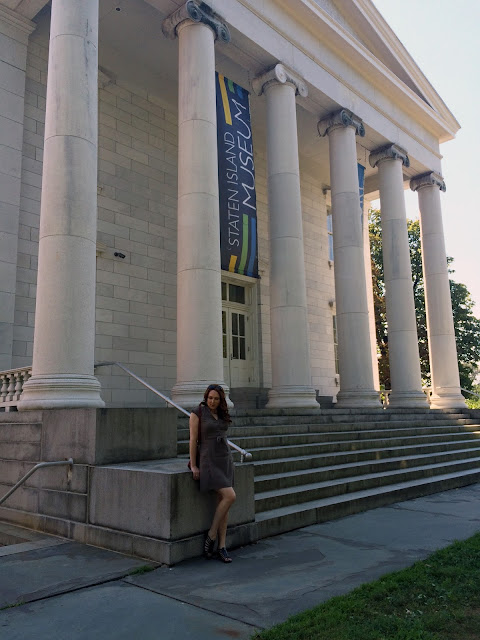 The Snug Harbor museum was sightly interesting. There were ship models and a they had a houseboat on display with all its furnishings still intact. All the walls were decorated with paintings of ships. I mean, they were no Turners, but pretty decent as far as artwork went. 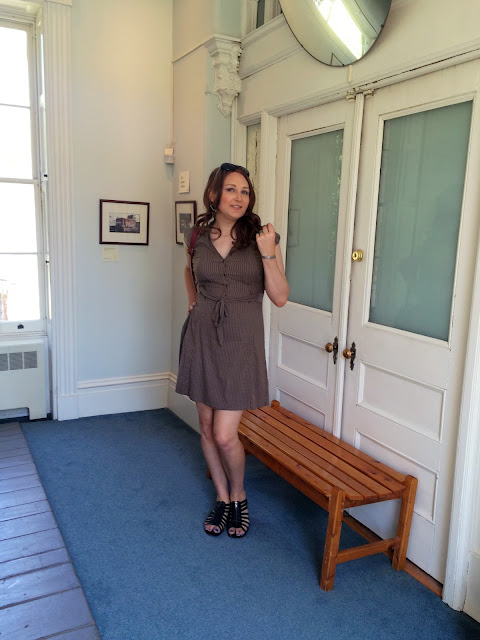 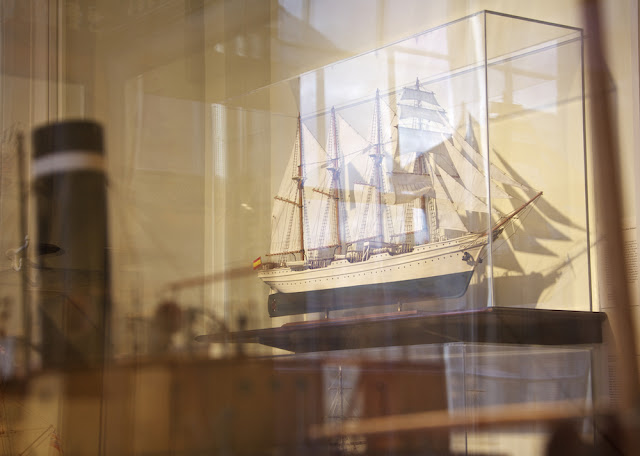 There were also displays about navigation including ships's wheels, sextants and telescopes. 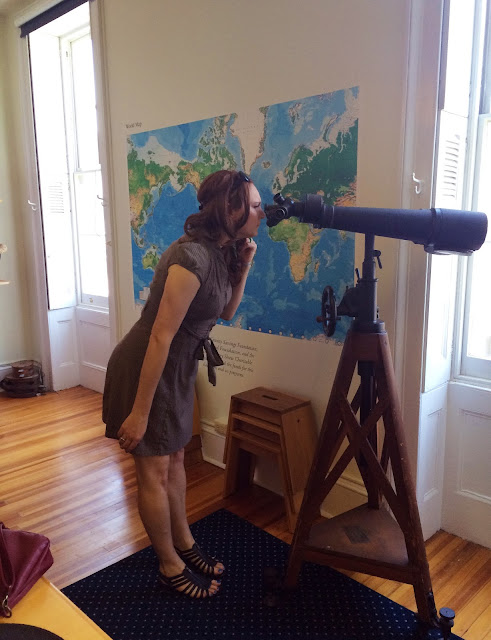 All in all, I wouldn't have paid for the museum, but for a free museum it was okay. After that, we strolled around the grounds. There were so many grounds and lots of interesting things to see. You know, like a giant praying mantis! 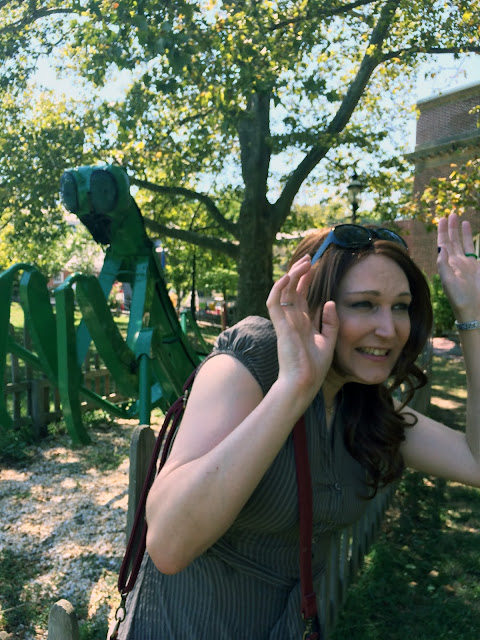 Okay, I really don't need to run. They only eat you if you mate with them. Sorry, bug, I'm taken.

After that we found an allee and stopped to take a few photos. 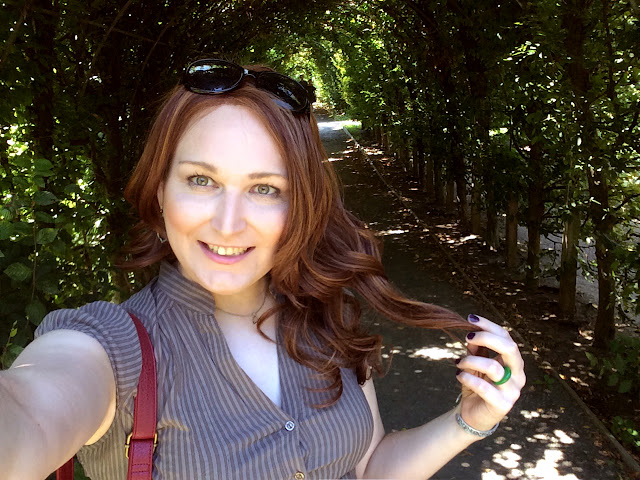 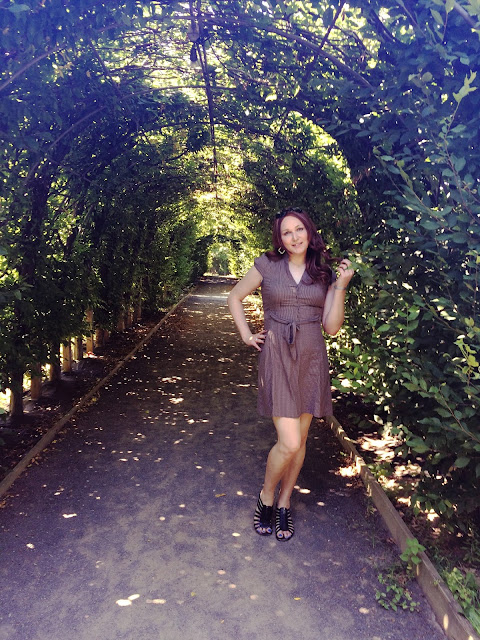 There were lots of other sights too like gardens, memorials and the hedge maze, which wasn't so much a maze as it was a "hedge windy path." This was no labyrinth and there wasn't really a way to get lost so it wasn't as entertaining as I expected. Also it had a castle, though ti was more like the kind of castle you'd expect to see on a miniature gold course. Okay, it turns out the maze and castle are for kids. Hence the lack of a challenge. Ah well. At least I know I'm smarter than a kid, so that's something. 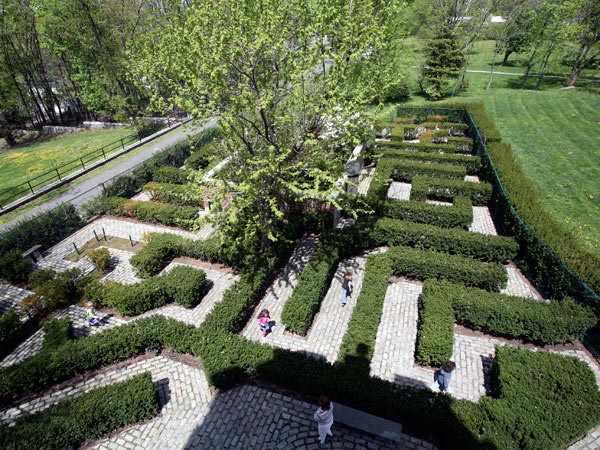 The best part was the Chinese Scholar's Garden. It was beautiful, even on a humid, sweltering August day. There were bamboo groves, big fat koi and lots of hidden swastikas in the designs. It almost felt like a Hollywood set and I bet it's probably been used for a few TV shows here and there. There's probably at least one Law & Order filmed there. There's definitely lots of weddings and they were even setting up for one when we were there. We took the opportunity for lots of pictures. 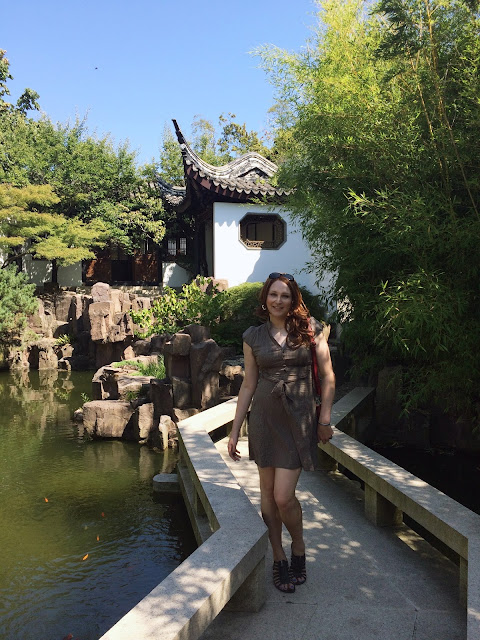 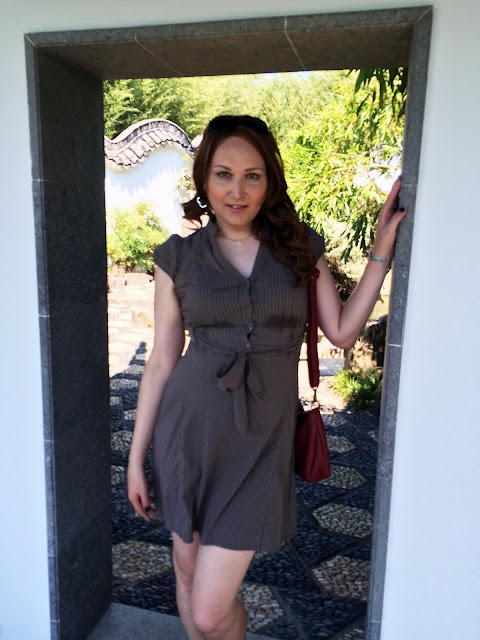 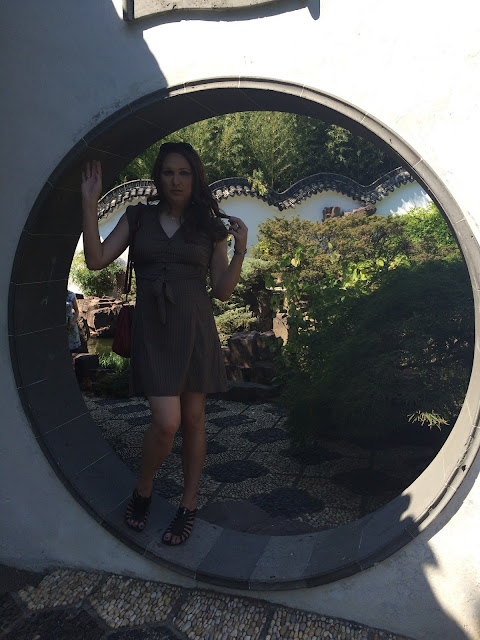 Above is the Moon Gate. They say you can make wish when you pass through it. 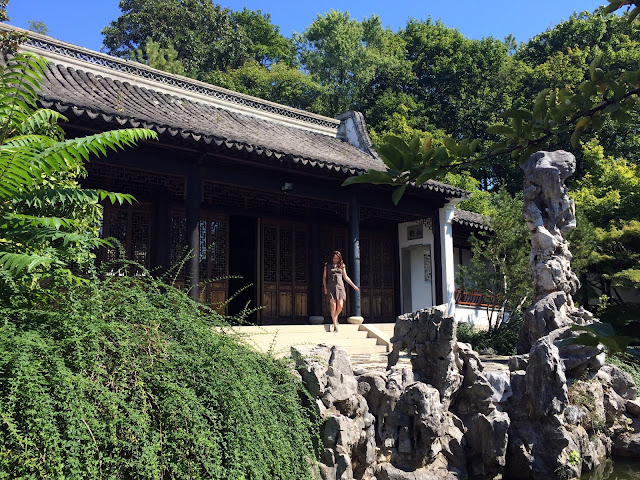 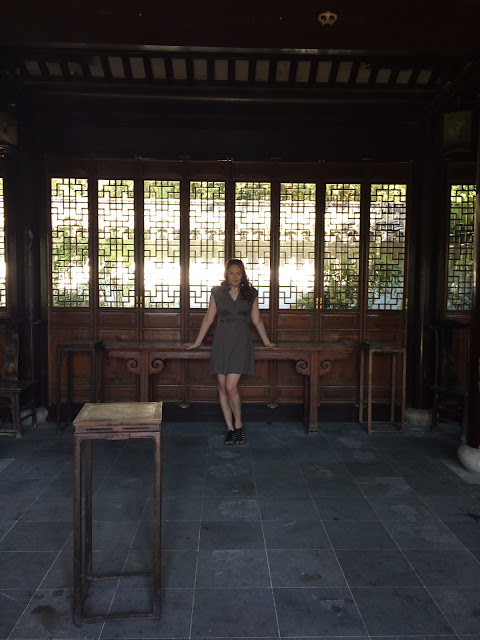 Above is me pretending I'm in Kill Bill, Vol. 1. 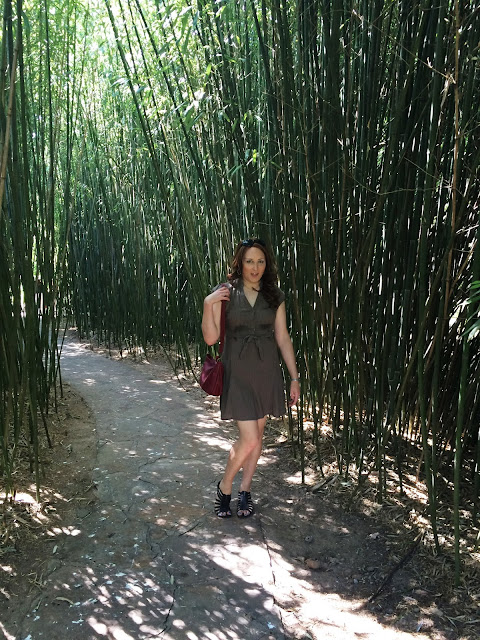 The funniest part was when this random dude stopped to give us directions. Now, I don't think we looked lost but apparently he felt the need to come over to us and start telling us about the interesting sights of Snug Harbor. This is something I'm starting to see more and more as a woman. Men coming up and helping when I neither need nor want help. You know, 'cause women are helpless and stupid and need basic things explained to them. But, as my partner explained, you have to be polite about it anyway. Ah well, this is what I signed up for.

All in all, Sailors' Snug Harbor was a fun little day trip. Since it's only one quick subway ride and then one quick ferry ride away and then one quick bus ride away it's pretty easy to get to. And it's one of those places where you can go and kind of forget than you're in NYC even though you're like right across the harbor from Manhattan and Brooklyn. It's nice to get away from time to time, but really I'm a city girl. Plus it was super hot that day and we were getting eating alive by mosquito. Apparently, I have that blood type that is just so delicious to mosquitoes that they can't control themselves. After a few hours outdoors in (sort of) nature were ready to head back to concrete and steel! 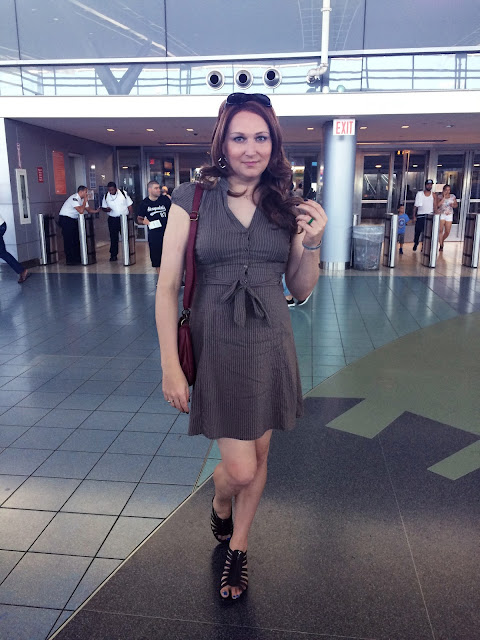 So, we stopped in at Pier A for a pint. A nice, refreshing pint. It was a lovely end to a fun adventure. And I'm getting to the point where being a girl is shifting from "nerve-wracking," passing "normal," and heading right toward "perfect." These are interesting times. 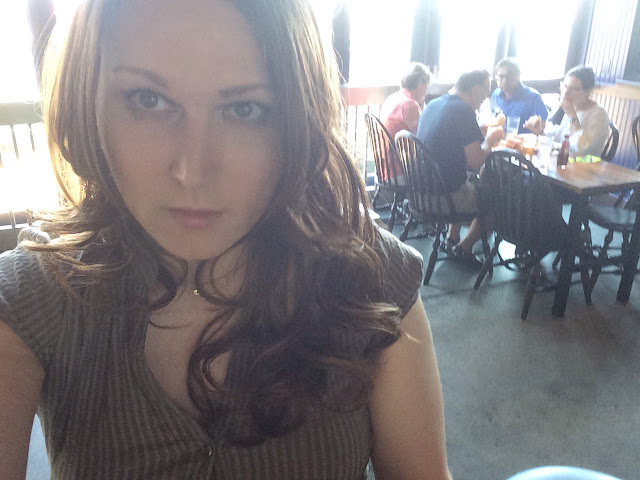 Posted by Faith DaBrooke at 7:32 AM