The other day I took the day off of work and lined up three different doctor appointments throughout the day, all around NYC. I did my best to dress professionally and while I'm still learning how to do more casual makeup, I tried to do a no makeup/light makeup look. Apparently it worked.

I got up early, got ready and then headed to the train to start my day like any other woman in the city. 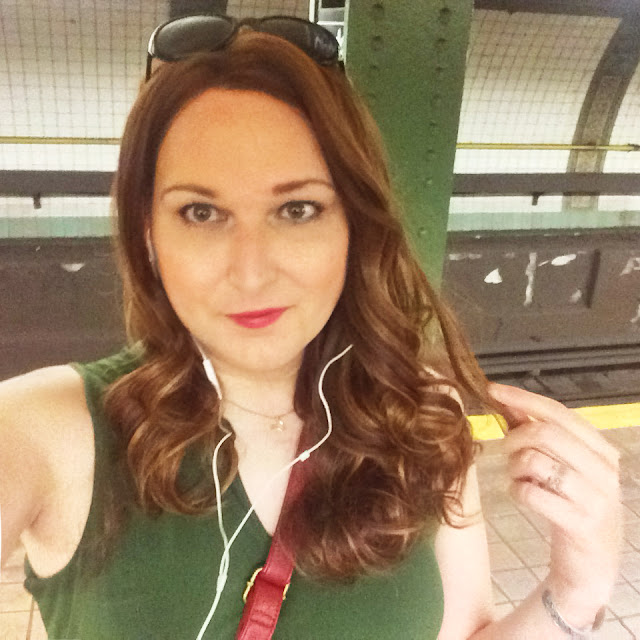 I went to a new dermatologist (my old one didn't take my insurance) and had him look at a mole. Then he was asking me some various questions, including what medications I was on. I had put E and spiro on my forms. Had a fun conversation:

Doc: Why are you taking estradiol?
Me: It's for hormone replacement.
Doc: Okay, yeah. But for what? What were your symptoms. Are you having hot flashes?
Me: (thinking to myself- I was born wrong? Is that a "symptom?") I'm transgender.
Doc: OH.......oh.....okay.

It was nice to realize that I passed with a doctor who had actually examined me! 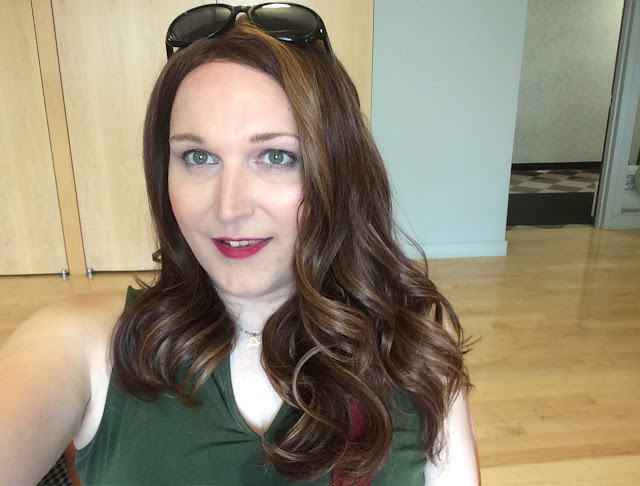 Then I headed off to my second appointment. For those of you in the Southern Hemisphere or in more gentle climes, I will take this opportunity to remind you that NYC has had a hot, muggy, humid miserable summer. It's been awful. And guess who took a day off work and scheduled three appointments all over town on the hottest day of the year? Yep, this girl. I was sweaty, I was gross and in constant fear of my makeup getting ruined. 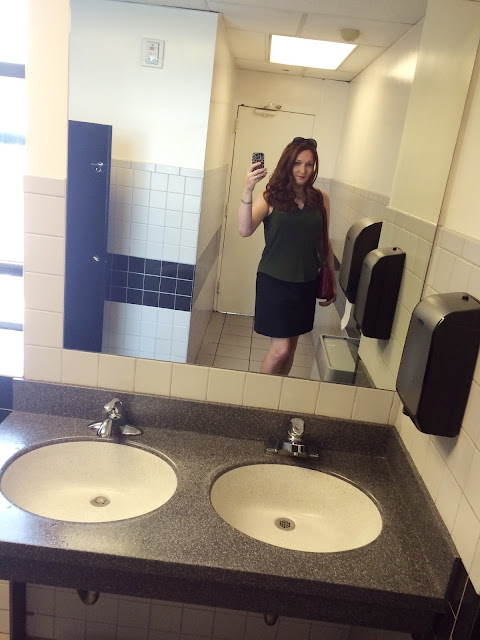 Got myself cleaned up and of course took the opportunity for a selfie. Then, my overcautious scheduling got the worst of me. While I'd given myself plenty of time for doctors' appointment (knowing that they often run late and make you wait), I'd managed to breeze through mine in less than an hour each. I ended up with a five hour block with nothing to do! So I headed back to Brooklyn and did some shopping. 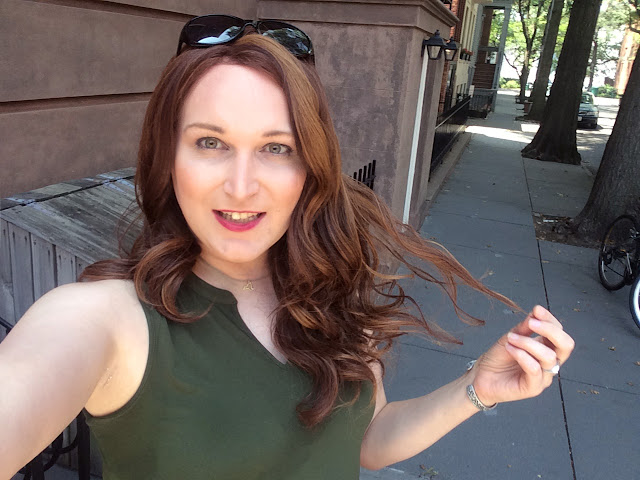 I hit LOFT because they were having their usual 40% off sale. I managed to snag a skirt I really liked but gave a pass back when it was at full price of $59.99. With the sale and markdowns I picked it up for $25. Over half off! Not bad. I loved this skirt because it's sort of A-line and some great movement and it feels fantastic. I liked it so much that I even switched skirts. 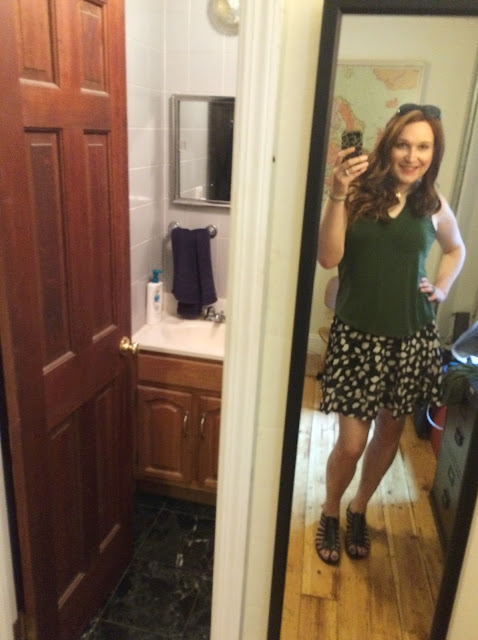 Then I went to my favorite diner for lunch and got a rather different experience than in guy-mode. Not only did the waiter carefully explain my entree (a hamburger) to me; what it was and what it came with and what the various cooking temperatures meant. He actually insisted on pouring my ketchup for me. You know, because girls don't understand hamburgers and can't pour their own ketchup.

Lastly, because I'm desperate to come out at work and start being full time (I plan to come out as soon as my next performance review and raise discussion happen - sometime before October), I went and did a stupid thing. I decided that, since I was in the neighborhood and had a little time to kill, I'd go stop by work!

Actually, all I did was walk through my building's lobby. It's a skyscraper with a kind of mall area in the lobby with shops and things. But, I walked right past one of my coworkers, whose desk is like ten feet from mine. She didn't recognize me, didn't react, just walked right past me in her own little world. Phew- but also good to know people are oblivious to me! And people I know well can walk right past me without noticing at all! 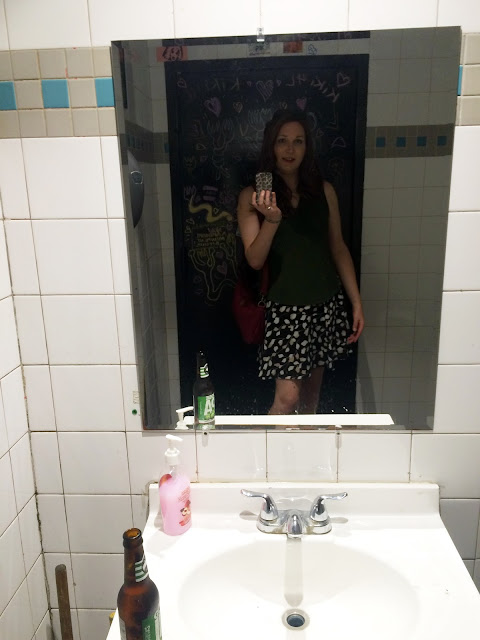 In the evening I had planed to go to a transgender meetup at Stonewall Inn. I'd gone a couple times a few years ago and met some fun people but at the time my work schedule made it hard to attend many meetups. Since I had a chance now I thought I'd check it out again. Because I had time to kill I ended up early. 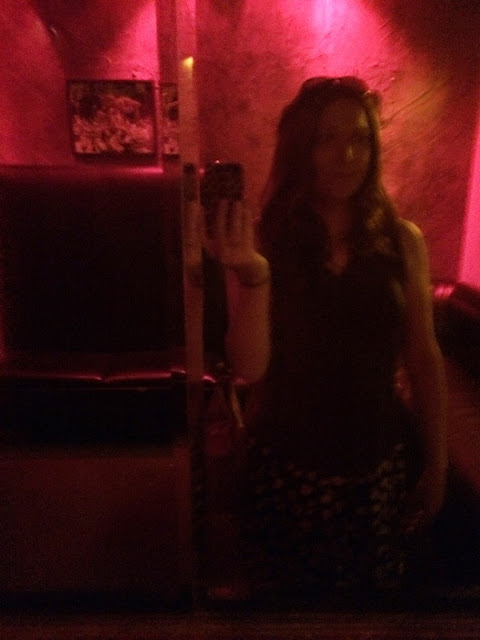 And the meetup was pretty bad this time around. Only two or three people were there and they busied themselves playing pool. As I'm not even remotely interested in billiards, it was kinda boring. Especially since the pool game made conversation nearly impossible. The worst thing was the groups of lesbians around the bar. I really wanted to hang out with them instead. I longed to hang out with them! I think I feel more comfortable identifying as a lesbian than as a trans woman, I guess. I need some more lesbian friends I think.

Ah well. I ducked out early and did an Irish goodbye. My family is from Tipperary. I'm allowed to say that. I headed out into the night, time to go home. 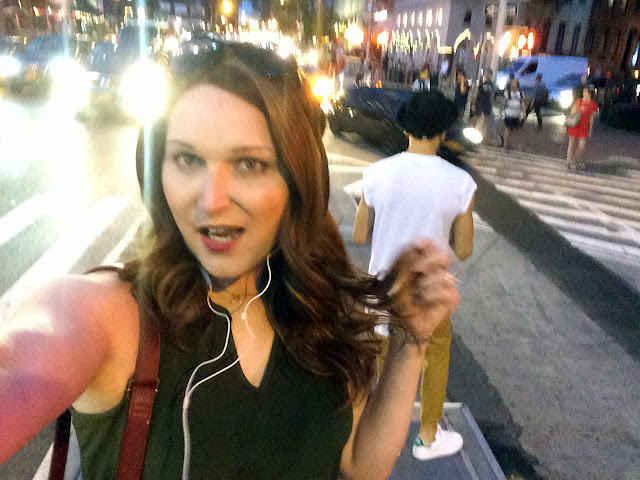 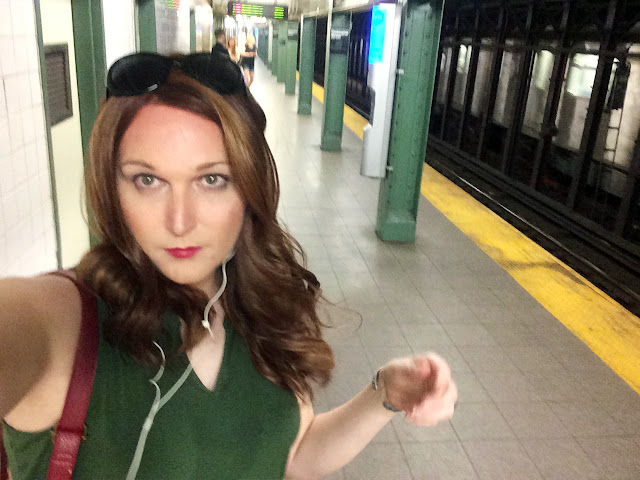 It was an amazing day and I felt like a normal girl all day. Sure, it was hot and muggy and gross but I'll have to put up with that when I'm full time. And I had to have an awkward conversation with my doctor's billing agency as to why the name and gender I put don't match with my insurance card. But, ah well. These minor frustrations will pass.

Also, at what point in your transition do you stop taking lots of selfies? I hope it's never. 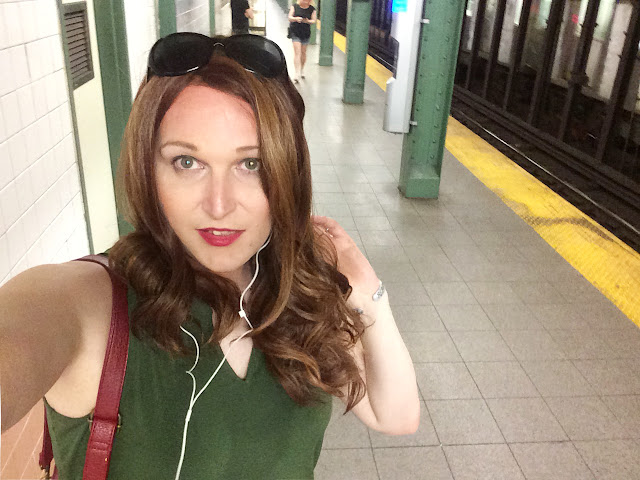 Posted by Faith DaBrooke at 8:22 AM