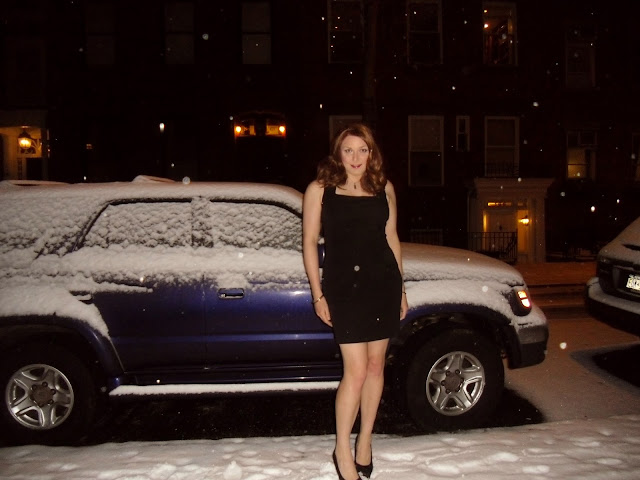 Winter is probably my least favorite time of year. Maybe it's the short days, maybe it's my Southern upbringing, maybe it's the numbing cold, blustery wind and freezing precipitation. But, I will say that there is one joy to be had during winter in NYC; those first few hours when it begins to snow.

Those moments are magical and beautiful. There's a rare stillness to the city. The snow reflects the light back warmly, giving the night a wonderful glow. For just a few hours, the city is transformed, gone is the dull gray grime of the everyday, replaced by a beautiful and peaceful serenity as the fresh virgin snow falls.

Also, it's a fun chance to take some crazy winter photos because I'm no stranger to running out to get pictures in the freezing cold. What's a momentary discomfort compared to the joy of getting that perfect snowfall picture? Seriously, it's so much fun to put on a little dress and some high heels and head out into the cold to get some winter pictures during that magical first night of snow fall. Beauty before comfort, right? 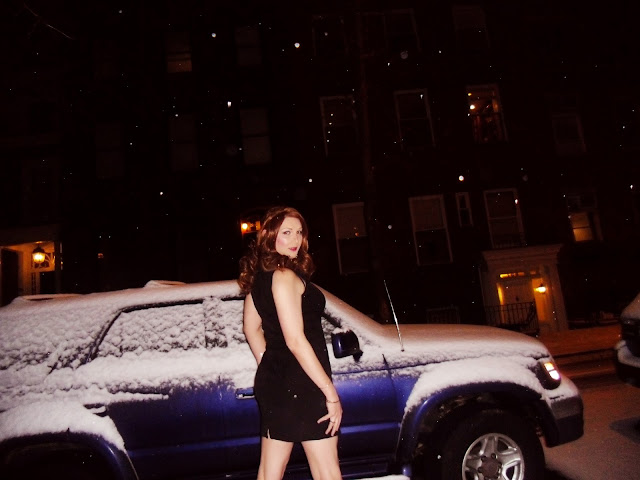 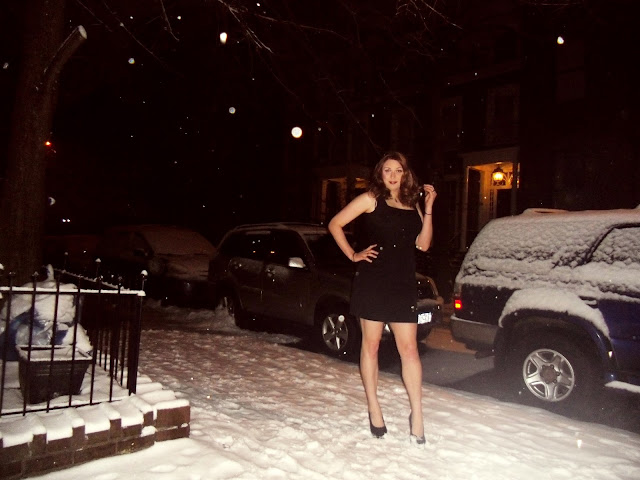 Of course I'm not crazy. For those first snow photos, I just ran out into the street for half an hour or so (until the shivering got too bad!). But, for actually going out, I decided to dress a little more sensibly. Okay, you guys have seen my green hat. Heck, all my cold-weather photos usually feature my green hat. It's not only a warm and stylish hat, but it also keeps my hair from blowing around too much. My partner actually suggested that I try a scarf instead, so I used my red one to wrap around my hair. It looked pretty good, I think. Though maybe a little Old World, like the head scarf of a Muslim woman or like a 19th Century Eastern European woman. 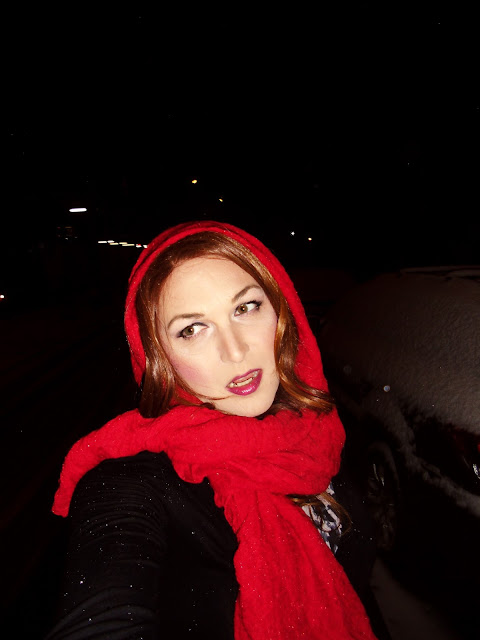 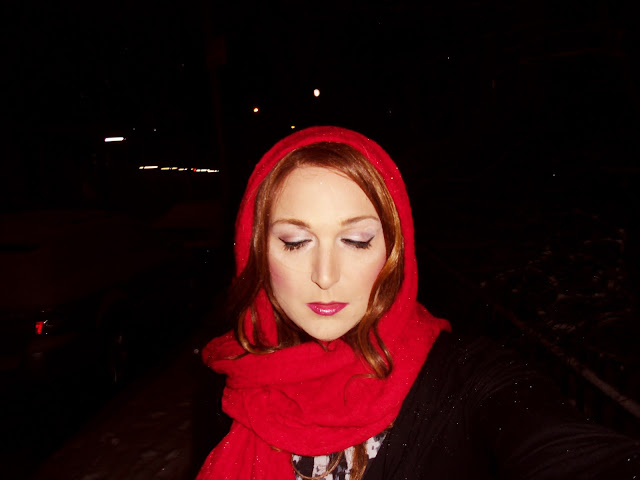 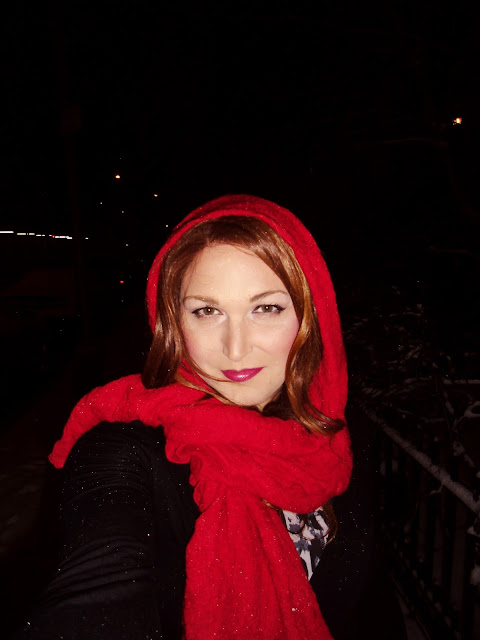 But I still think that it looks cute and the picture above got a lot of likes on Facebook, so I guess that counts for something. Honestly, scarves still baffle me. Some women can look so good with a scarf loosely draped around their neck or shoulders, but no matter what I  seem to do or no matter how many "How to wear a scarf" YouTube videos I watch, I can just never seem to look good in them. So, babushka it is. At least it keeps me warm. 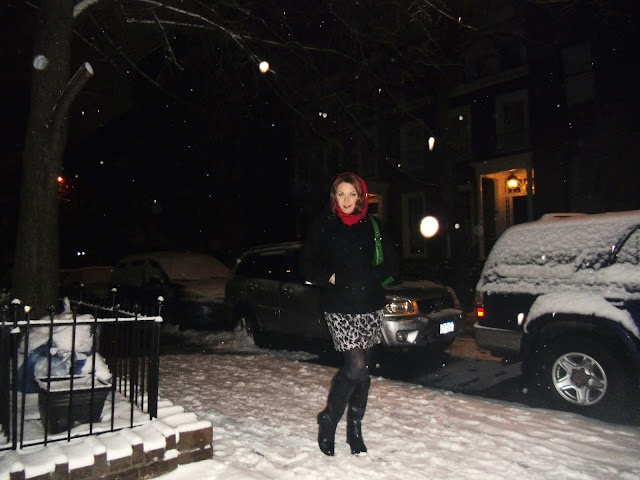 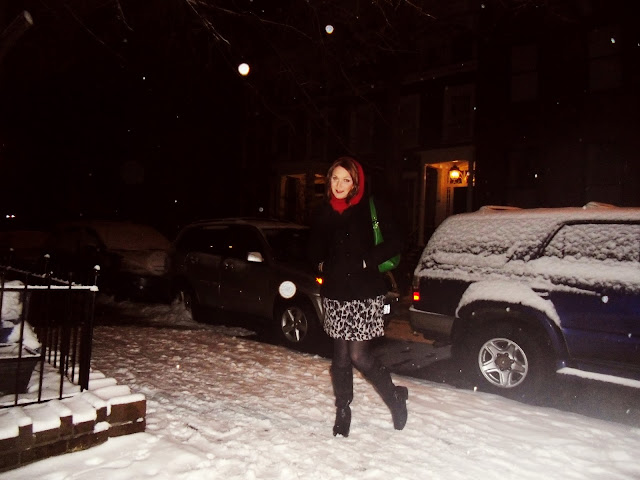 Luckily, this winter hasn't been too bad, but I'm definitely counting the days until it's warm again. While I think I manage the winter girl look okay, I still prefer the wonderful feeling of wearing a dress on a nice sunny day. That'll be soon. But in the mean time, I'll just rock the coat, scarf, tights, and big boots that a snowy day usually requires (unless you're just ducking out for a quick photo shoot that is!).

Posted by Faith DaBrooke at 8:47 AM