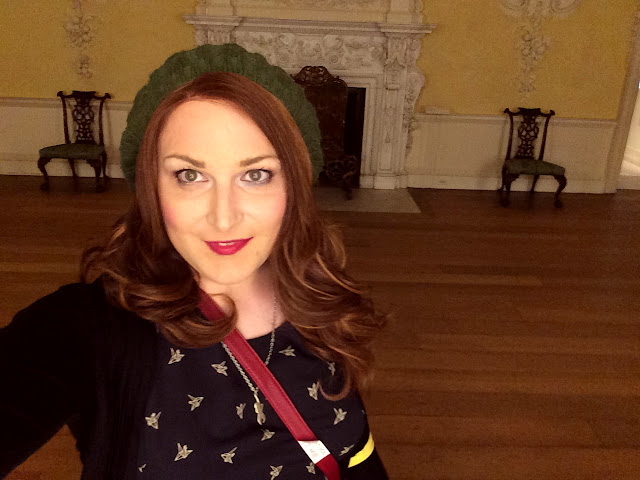 When I was eleven years old I went outside for the first time, metaphorically at least. Left home alone, I borrowed my sister's plaid skirt. On a pleasant Georgia day, I put on that skirt and screwing up all my courage, walked right out the back door of our house, around the side of the house and then right back in the front door, as quickly as my legs could carry me. It was my first time outside, not quite as a girl, but at least wearing a girl's item of clothes. Sure, I had been out plenty of times when I was really little and my sister would dress me up, but this was my first time doing it when it was forbidden, when it was a sin. I was actually going outside, sinning for all the world to see, with the full knowledge that if I got caught everyone would know I was a horrible pervert. If my family saw me or found out from a neighbor I had no idea what would happen, but I was certain it would be bad.

If I could go back in time and talk to that eleven year old, I wonder if he would believe me when I told him that one day he'd be spending his birthday as a girl, surrounded by friends, sipping champagne at the Metropolitan Museum of Art. That was birthday this year, and it was perfect.

As many of you in the Northern Hemisphere know, the last few winters have been rather brutal. During those cold, dark days, I came up with a plan for some fun indoor activities including scavenger hunts in Grand Central Terminal or hide & seek in a large museum. Though this winter hasn't been nearly as bad, my friends and I put one of these plans to action and came up with our own rules for hide & seek at the Natural History Museum. It turned out to be super fun, so for my birthday, I made plans to play again, this time at the Metropolitan Museum of Art (or "The Met" for those who are both lazy and confident that no one will confuse the museum with the other Met where they host operas). 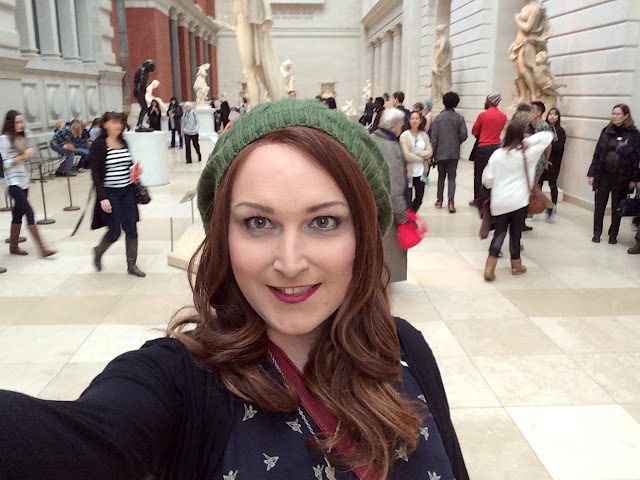 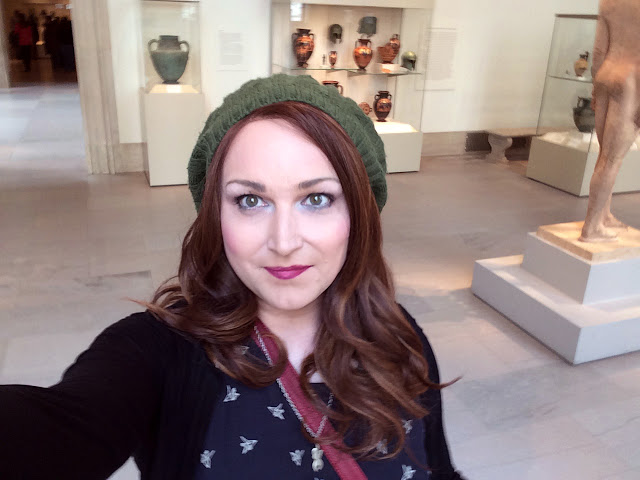 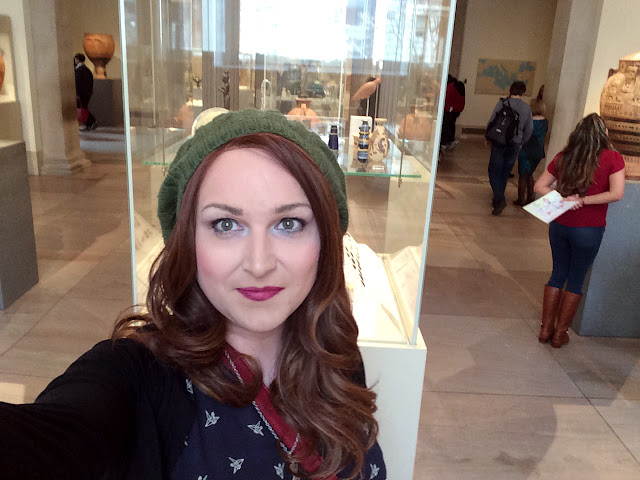 So, yeah, I wore my Brooklyn Industries crane dress. Again. Right now I don't really have any casual dresses that work for winter. All my casual dresses are just too summery. But, since my friends haven't seen me that often, they don't know where I am in my laundry cycle. So yeah, I wore it again. Plus I think it looks cute with my thin black sweater, tights and my ankle boots. It's a cute winter look. And I'm just not sure about jeans. I mean, if I'm going full time I should get used to them, right? As a guy all I wear when I'm not at the office is jeans and a black t-shirt or jeans and a black sweater. Maybe it's time to look into some nice fitted black women's t-shirts. Yeah, casual is a challenge for me, but one I'll need to rise to if I'm going to be doing this every day.

Unlike back in my more running around the yard days, now I'm much more comfortable being out as a girl, to the point that it feels normal for me to be out and to interact with people as a girl. It's so great to me that I now have friends who have only ever met me as a girl, which makes me super happy and giddy. But, as comfortable as I am in that role, I still get super paranoid. If anyone look at me, I immediately fear that they're making fun of me in my head. If I hear two people giggling on the subway, whether they're near me or not, then they must be laughing at me. I'm still trying to remember to avoid eye contact with everyone and ignore things, but sometimes, I do worry that I stick out like a freak.

On my birthday trip to the museum, I think I did okay though. Though I did accidentally make eye contact with a couple people (making me ever so slightly paranoid about passing), generally I managed to blend in with the crowds well enough. In the end I think I passed well enough, and most importantly, I was about as out as a person could be. Thinking back on all those times I was afraid to leave the house, I was now out in public, unafraid and happy to be who I am. 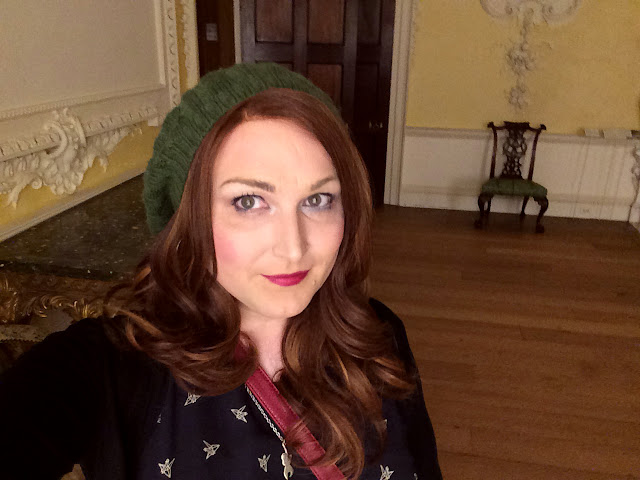 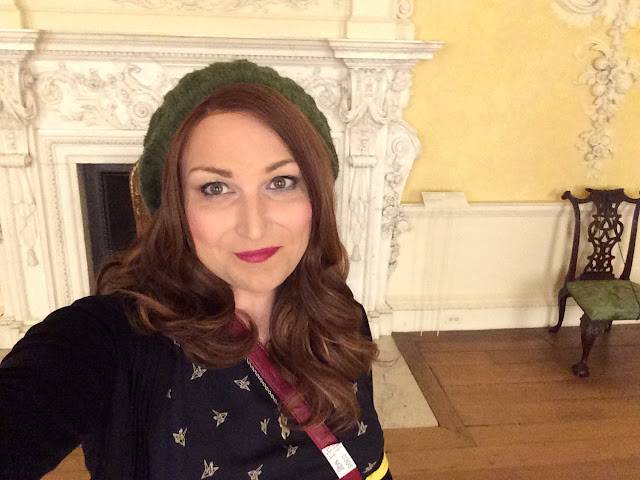 Sadly I didn't get a lot of photos of me and beautiful art, because we were playing hide & seek the entire time! Quite frankly, I ended up stuck in a few hiding places with rather bad lighting, though I did my best. In the European furniture area, there were luckily a few mirrors and well-lit rooms, but other areas tended to have some bad lighting, making photos and selfies a little trickier. 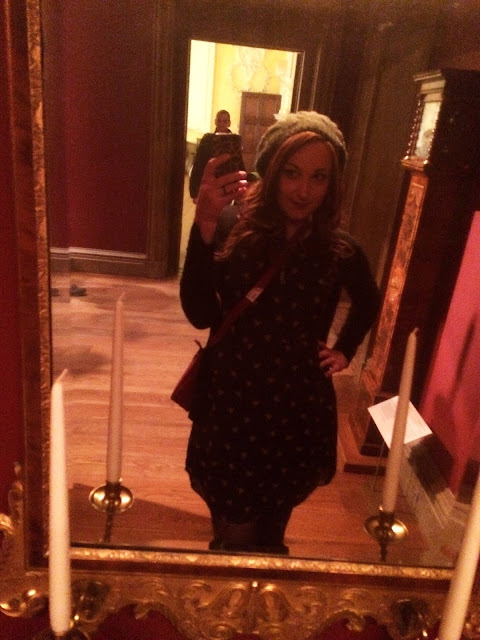 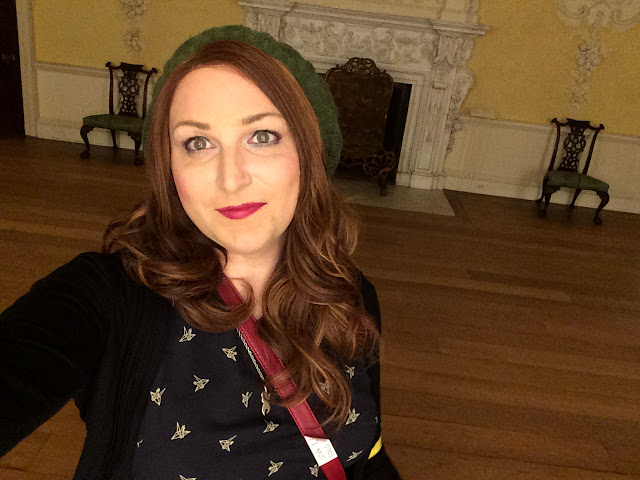 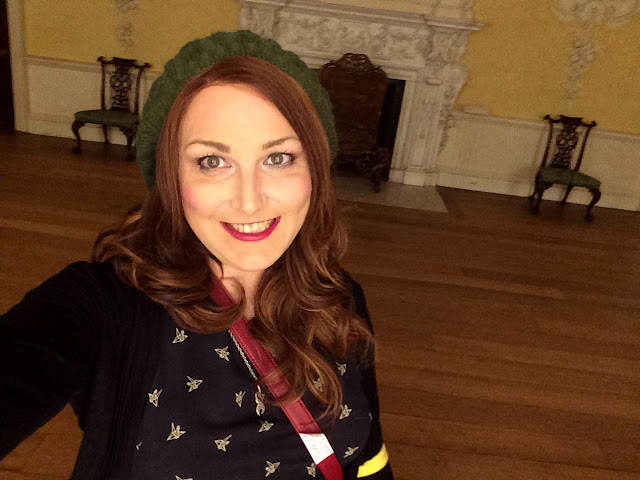 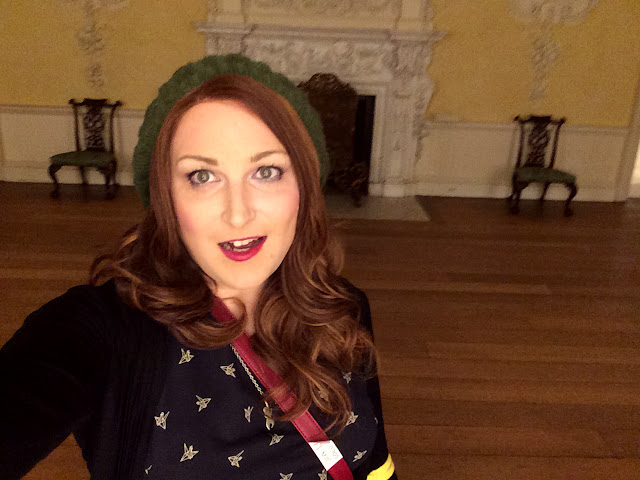 We did one round of hide & seek in the Greek and Roman statuary area, another in European furnishings and then our final round in Modern-20th Century art. My favorite spot within the Met is probably the Temple of Dendur (as seen in When Harry Met Sally). 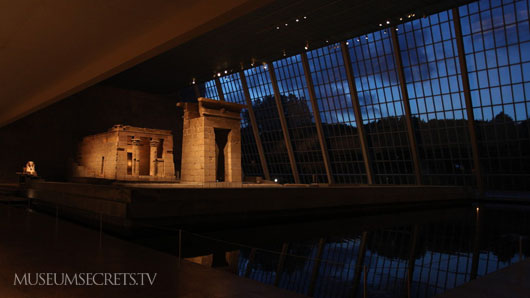 On this particular trip, we didn't even visit the Egyptian section and I barely got to look through 19th Century European painting, which is my other favorite spot in the Met. Also, I was hoping to snap a selfie or two with Washing Crossing the Delaware, but we didn't make it to that area either. Looks like I have many Met visits in my future. 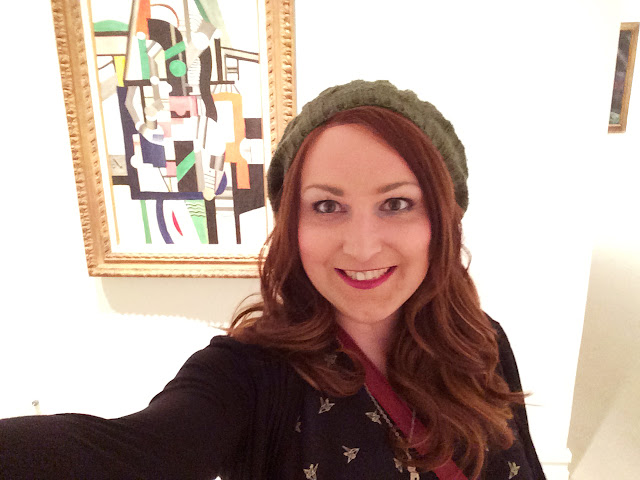 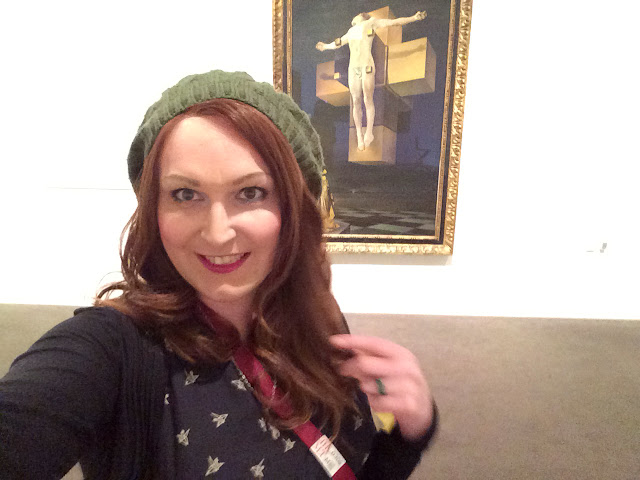 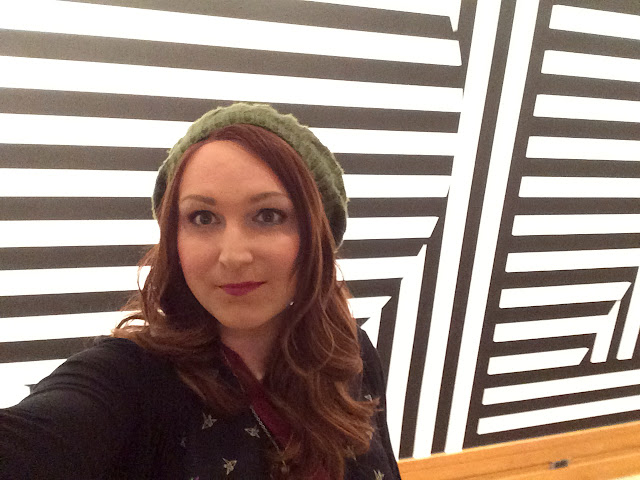 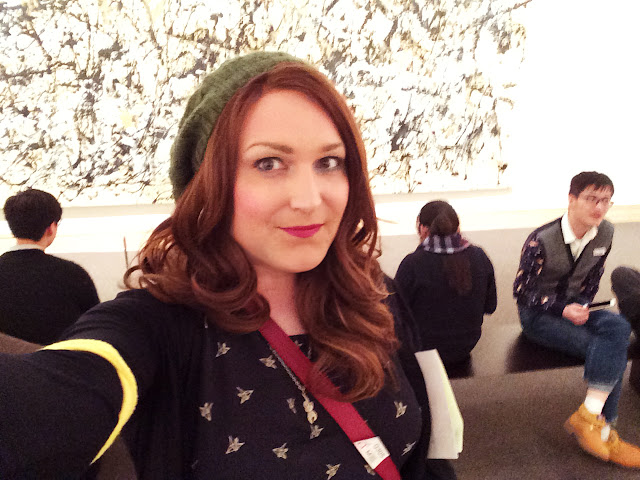 Also, I realized that this was my first birthday that I've spent as a woman. How awesome is that? Really, that was the most amazing part of all of it. To be out in public, with my friends, accepted as a woman. It was a great day. We saw some amazing art from in a world-class cultural institution, played a fun game of hide & seek and then went up to the balcony bar for a drink. A friend of mine even bought me a rather expensive bottle of champagne (how awesome is that?) and then the waitress brought me chocolate covered strawberries (how awesome is that too? I've never had a museum give me free dessert before). There's something about sipping fancy champagne in a beautiful museum that makes me feel so classy. I mean, I grew up a working class boy in Georgia and then I get to grow up to be a classy woman sipping fancy champagne at the Met. It's a good life.

Here's to another great year! 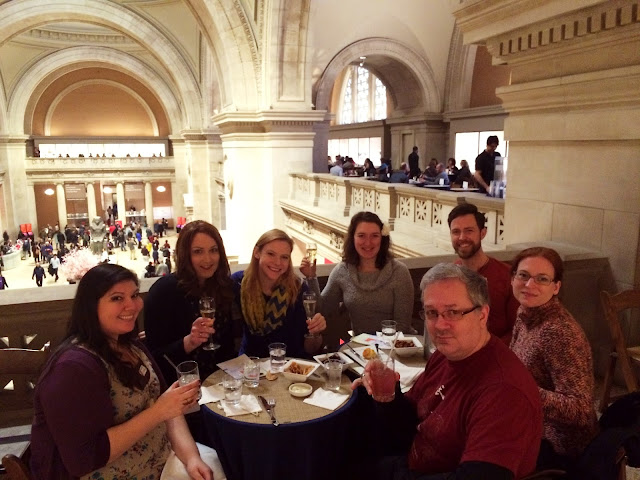 Also or those interested, here's how you play hide & seek in a major museum:

Metropolitan Museum of Art Hide & Seek
Each player will be given an arm band (in case anyone doesn’t know everyone well, they’ll be able to recognize who’s playing the game). We'll form a circle and roll a D20. Whoever rolls highest heads out into the museum and we’ll start the next round. Once there is only one person remaining in the circle, that person is the Seeker. The Seeker will count to 100 and then the game begins.

Players find a hiding space in the museum (or within agreed upon boundaries) and stay there. When the Seeker finds another player and tags them, then that player also becomes a Seeker. They must be tagged, not just spotted. The game lasts until only one person remains uncaught.

If the last person has such a good hiding place that the Seekers give up, they can text them a surrender and everyone will reconvene for the next round.

Rules
1). All players must remain in the designated area, and must remain in public areas. No going to 'employee only' areas, hiding in restrooms, special paid entry exhibits, trying to climb on top of the Temple of Dundur or inside a sarcophagus, etc.
2). No running, being loud or engaging in any activity that could ruin anyone else's museum experience or put any person in danger or possibly cause damage to museum property or exhibits.
3). Players will have an arm band and must wear your arm band/cloth at all times. Disguises are allowed, but your arm band/cloth must always be visible.
4). Seekers don’t have to stay together. They may split up to cover more ground. Seekers may communicate by text message when not together.
5). Any personal article or article of clothing you’re wearing counts as “you” for the purposes of tagging.
6). Play fair, don’t cheat, and have fun. And maybe learn something about Grecian urns or 19th Century European oil paintings.
Posted by Faith DaBrooke at 6:28 PM