Shopping Can Be Scary (But It's Totally Worth It) 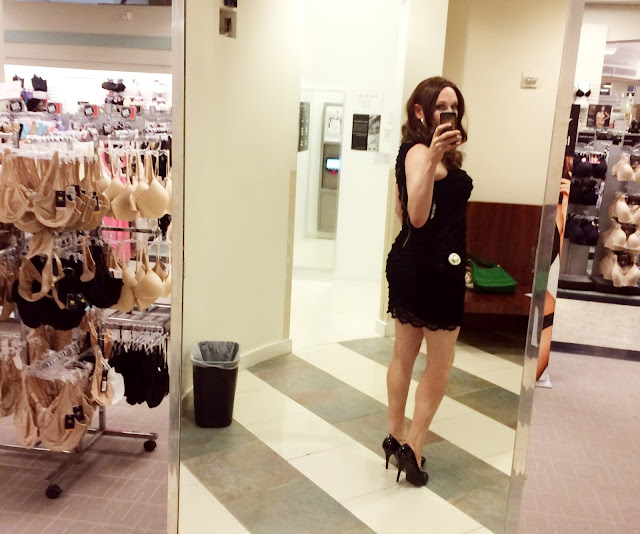 It's totally true. Shopping for women's clothes, shoes and makeup can be scary. I've been going out shopping now for almost twenty years, but even for me it can still be a little bit nerve-wracking going out to a store. Still, it can be really fun to go shopping girled up and there's nothing quite so amazing as being in a room full of beautiful dresses that you can totally put on!

When I was in Georgia in my teens, I was absolutely terrified of shopping, mostly for fear that someone I knew would see me. Or perhaps even more terrifying, someone who knew my parents would see me. Heck, it terrified me just to be in the ladies section (of course back then it was the juniors section) in a big store. Generally, I'd restrict my shopping to Salvation Army or to after midnight shopping at Wal-Mart. Luckily no one I knew ever saw me.

Once I moved to New York, I started to feel more comfortable shopping in women's clothing stores or in the ladies section. Still, I only ever shopped in guy mode. Going out a girl was till pretty new and terrifying for me back then. So, I'd hit up the cheap clothing stores on Steinway Street in Astoria, Queens and get my skirts and dresses and shirts and things. A place called Easy Pickins was one of my favorite. It was a fairly working class neighborhood, so there weren't any nice places at all. You literally had to go one neighborhood over to Woodside to find an Old Navy. But, as someone who had never really been able to shop without fear it was amazing.

Only once do I ever remember my gender being an issue. Once I was walking past Goodwill, when I spotted a silver sequined mini-dress in the window. I asked a salesclerk what size it was and she said it was a medium. I asked if I could try it on and the lady smile and said "Is it for you?" I said it was and she was like "Of course." I think in her mind, if she was going to go to the trouble of taking it off the mannequin, she wanted to be sure it was at least for someone worthy. Luckily I was worthy.

Another time I was in a small shop and there was a cute dress they had in a 10. Now, sizes can be crazy, so while I was ordinarily a 10, I wanted to be sure the dress would fit me. I was in guy mode, but I asked if I could try it on. The salesclerk said no, I was absolutely not allowed to try a dress on. Now, what was so weird about this situation was that there was one fitting room in the entire store. Just one room. It was behind a locked door. I could have asked to see the manager, but the lady pissed me off so much I didn't want to buy the dress at that point, even if it fit.

My first time going out shopping as a girl was actually in Astoria, Queens. I had started to get much more comfortable being out as a girl and decided to go shopping at one of the more upscale shops in the area. This was a dress shop where a dress might cost $50-$75, and while it wasn't exactly an upscale boutique, it was fancy enough to be a intimidating.

I went in and grabbed a couple things to try on. Honestly, I don't even remember what they were and asked if I could try them on.One of the sales clerks, an impeccably groomed gay dude showed me to a room, then said "I'm going to go get some other things for you to try." He came back with a couple of items, including one black wrap dress that he had to help wrap me up in and then tie the belt tight around it. At the time I was super nervous, worried that I looked stupid, that I wasn't passing and that I was ridiculous out in the store. I didn't buy anything, not even the dresses recommended by the nice clerk and just hurried home.

It would actually be years before I went shopping as a girl again. It takes a lot of confidence just to go outside as a girl and that's maybe just to walk around. It takes even more confidence to go into a store and to interact with people. And I think it takes the most confidence and courage to attempt to fit in to a wholly female space. For me the latter still gets me nervous. If I'm using the bathroom in a big place like an airport or using the fitting room in a large store like Macy's I get super nervous. I'm afraid someone will call me out, be like "Sir, what are you doing in there."

My first time doing some serious shopping as a girl was a few years ago. A few weeks before my coming out party, I got girled up and went to Macy's to try and find the perfect party dress. Once I got past my initial skittishness, I was fine. No one really paid me any attention at all as I walked around the dresses and loading my arms with beautiful pieces to try on. With a few in my hands, I walked back toward the fitting rooms but didn't see an employee in sight. So, I found a vacant fitting room, shut the door and tried on some dresses. 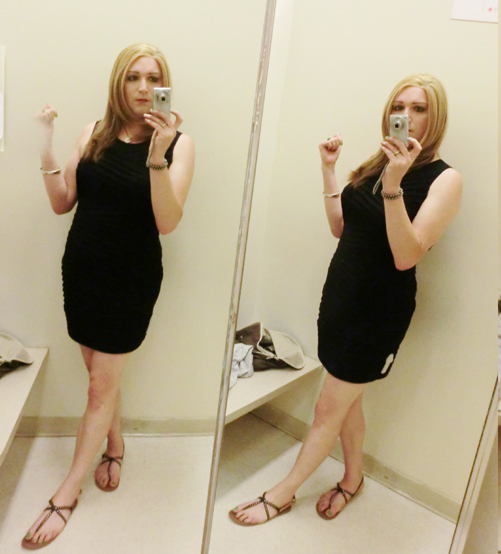 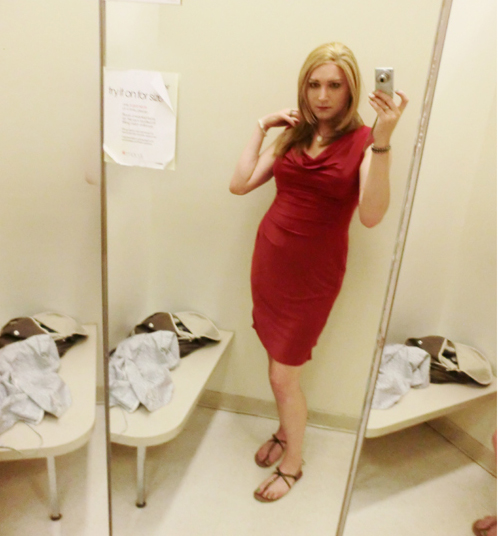 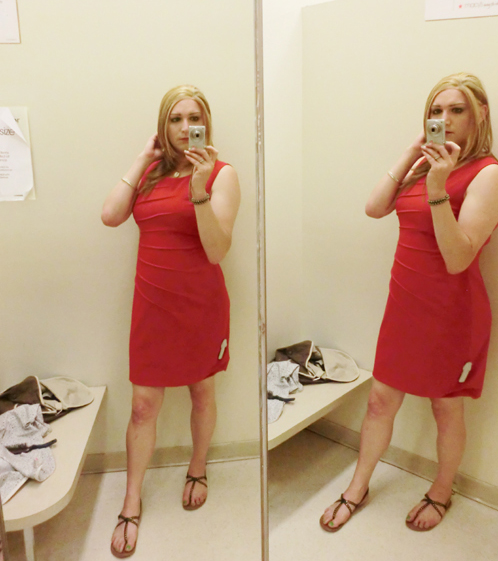 Immediately, I fell in love the with the first black one and the first red one above. They were way more expensive than I was used to, but I'll be damned if they didn't fit like a glove and I didn't look hotter than a Georgia summer in them. Had to buy them. So, I took them to the counter to and wouldn't you know it...my bank thinks that just because I'm buying $250 worth of women's clothing that someone has stolen my card. So I do my best to laugh it off with the sales ladies, called my bank and got them to authorize the charge. Super embarrassing, but I had done it! I'd shopped as a girl and it was awesome!

Oh my gosh...an entire room full of beautiful designer dresses in every shape and color and I can just walk in and try on any that I want? When I was growing up, I remember how rare it was to be able to put on a dress. You'd have to wait for no one to be home and then you could try on your sister's dresses. When I visited my grandparents, I could try on some of my aunts dresses, but that was it. That was the only chance I ever got. But here was a giant room full of thousands of dresses that I could walk in and try on for free! Oh my gosh. Oh my gosh!

A couple of months later I went back to Macy's and went shopping again. Instead of sandals, I wore flats and brought a pair of black heels in a tote bag. This time I found a purple, satin Ralph Lauren dress that fit like a glove and looked beautiful on me. And I looked beautiful in it. For the first time, I left the dressing room and walked over to the three mirrors they had up by the door. It was $160 but it looked so beautiful I absolutely had to get it! 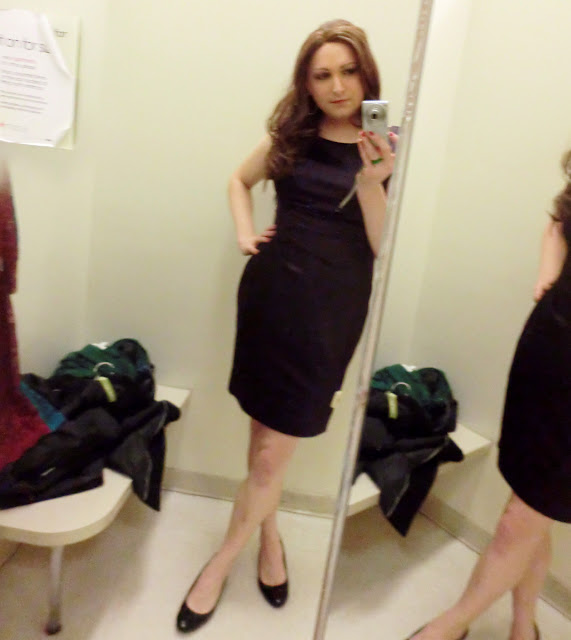 This time, as I was buying it, the saleslady literally said "Oh, I saw you trying this on, it looked so good on you!" Holy crap, the saleslady saw me using the ladies' fitting rooms and was totally okay with it! Okay, this was amazing. I was totally in. I could totally shop as a woman and have a great time doing it! All I had to do was not fall in love with the clothes I tried on. 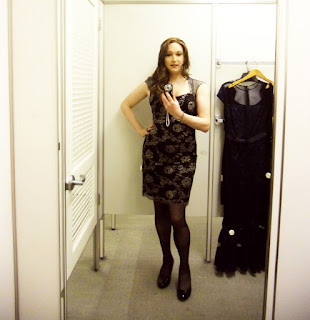 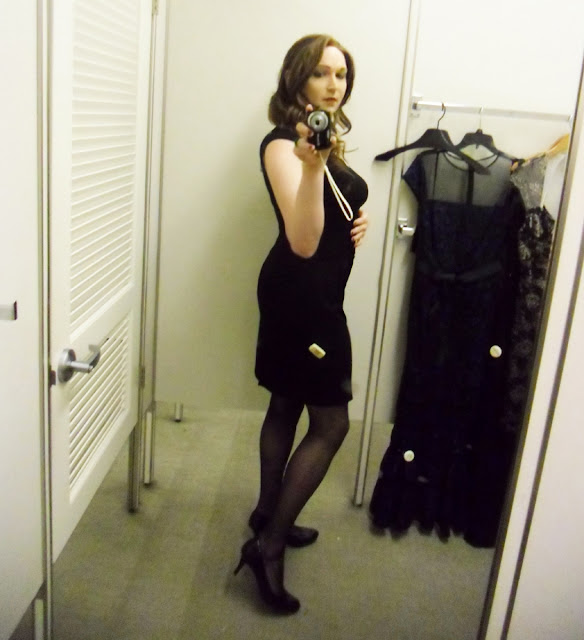 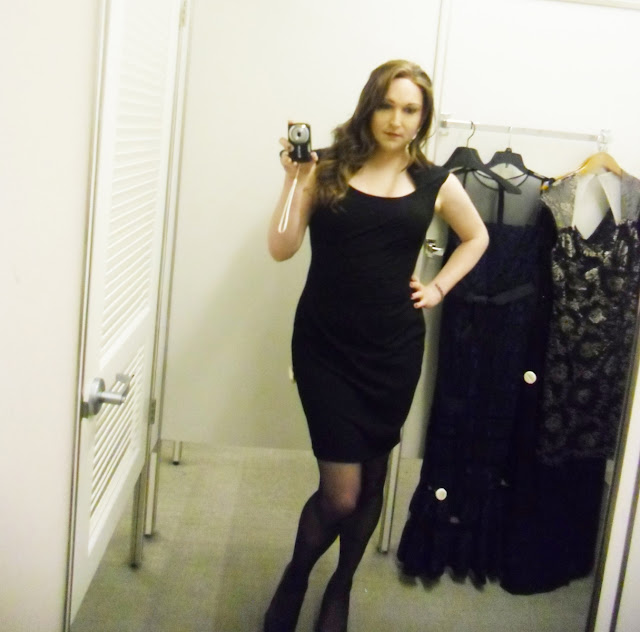 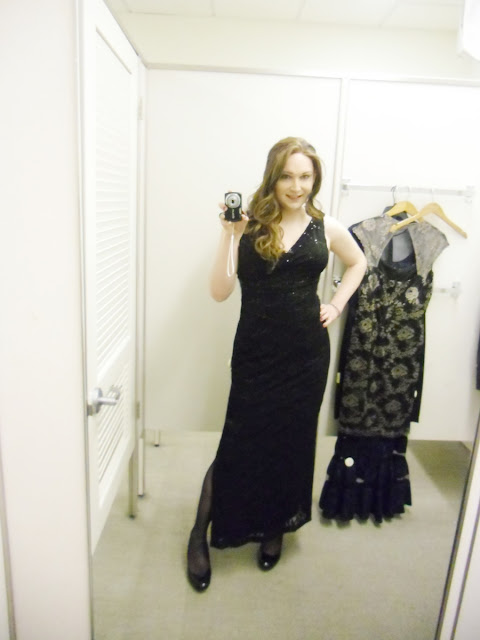 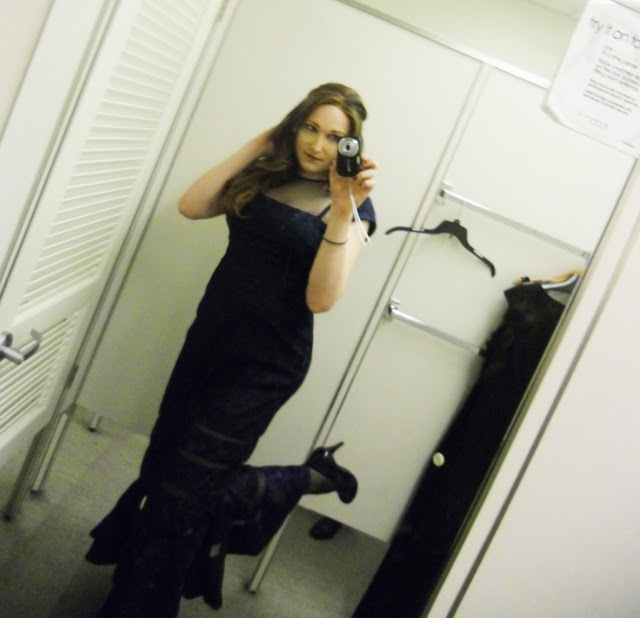 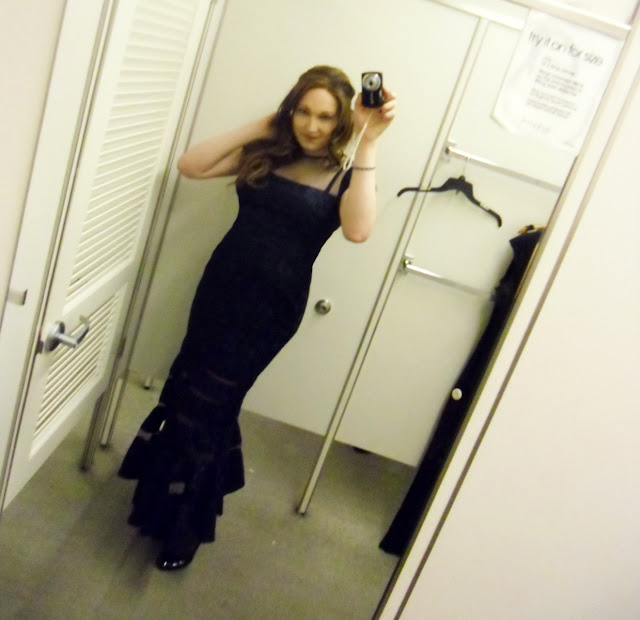 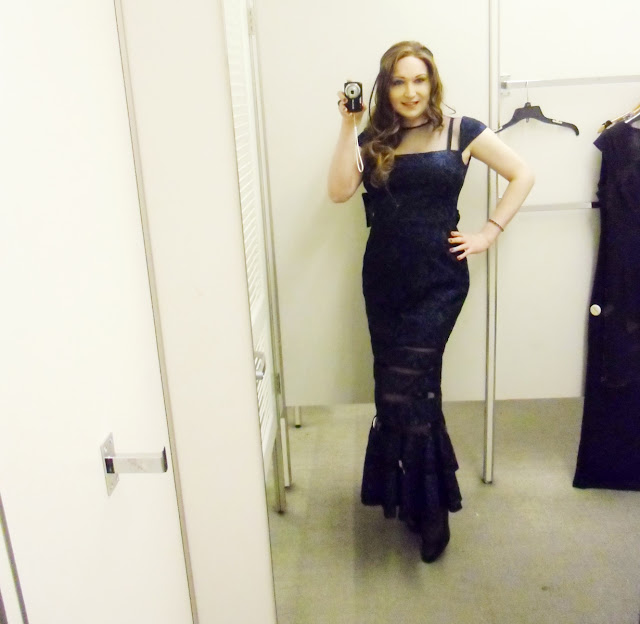 I think my greatest validation came when I tweeted a photo of me trying on a dress at the Macy's flagship store on 34th street in NYC. 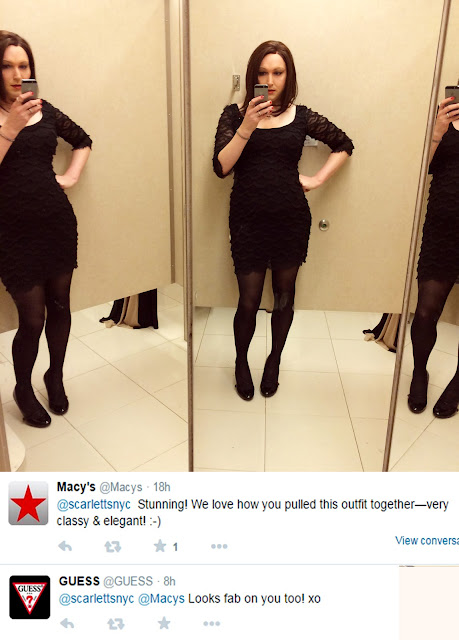 So I guess Macy's corporate has officially given me the green light! That's a good feeling!

Shopping as a woman can be tricky and scary and to my readers who've never tried it, I say first of all, get over your fear, have fun, and be respectful of the salesclerks and other shoppers where you shop. Only use the fitting rooms of the gender you're presenting as, get in, try on your clothes and get out - don't make a big production of it, and if you encounter a bigot or an asshole, be polite, but firm, as to speak with a manager and if the manager gives you crap, get their info and complain to corporate. Though, honestly, I don't think you'll get any crap. I think people tend to mind their own business.


I think you'll have an amazing time going shopping and I'd love to see your photos!

Posted by Faith DaBrooke at 8:11 PM