Ever want to get on hormones but didn't quite know how to go about it? Okay, that was me. Honestly, the American medical industry is baffling enough when I have a basic illness or injury, and I even have insurance. When you're trying to get something out of the ordinary, like transgender care, it's even worse.

As soon as I discovered the internet I started looking up transgender related pages. Okay, the actual first thing I looked up online was song lyrics, but later, after everyone had gong to sleep, then I looked up transgender websites. Back in the day there were a few Geocities blogs and whatnot, and the bios almost all talked about hormones. But I had no idea how to get hormones, or even how to find a doctor who would prescribe them. One time I did go actually book a psychology appointment, but couldn't actually get up the courage to bring up my transgender feelings. Instead, I lied about being depressed or something and then never went back.

Luckily, there was one amazing thing I was to find on the internet; friends. The best part about those early days was the amazing friends I met. We would talk on Yahoo messenger, check each other out on urnotalone and friend each other Myspace. It was one of my Myspace friends who first told me about Callen Lorde. She was awesome then, but she would go on to be TV star Jamie Clayton. Yeah, I'm bragging.

Callen Lorde Community Health Center is in the Chelsea neighborhood of Manhattan in NYC and specializes in providing care for the LGBT community. Based on what I had read of other doctors, I thought there must be an insane waiting list or something, but nope. I called them at 212-271-7200 and booked an appointment for a few weeks in the future. It was super easy.

When I showed up for my appointment, the first thing they made me do was sit and fill out paperwork. That's how all doctors' offices work. I think it's in the Hippocratic Oath (somewhere in the back). One nice thing is that they let you put down your preferred name and preferred pronouns, which I love. It's something that instantly made me feel more comfortable.

The first person I met was a mental health professional. It wasn't too in-depth. Mostly I think they were there to make sure that I was neither a drug addict nor suicidal. I mean, if I were either, they totally would have offered support, but I think generally wanted to make sure I was a healthy, functioning adult capable of making my own decisions.

Next, they put me in a regular doctors' type examination room There I got an HIV test (negative!) and a hepatitis booster. Then the nurse, a cool dude with tattoos and a definite LA attitude, took some vials of blood. Now, I should say that I am super bad when it comes to blood. Having blood drawn makes me faint and it is an awful situation. I get super hot and cold at the same time. My vision becomes total stars and starts to tunnel to black, my hearing turns to high pitch beeps and I feel an awful sense of dread and panic. It's called the vasovagal response. It just happens to some people. It scares me, because I know that's what dying will feel like. Dying is just not getting enough blood to your brain. Well, vasovagal response is what that feels like. It freaks me out to know what dying will feel like. Thankfully the nurse was super nice and professional and made me feel 100% better. He gave me some water and made me lay down, which made me feel better a few minutes later.

Next, I graduated to an actual doctor. My first doctor at Callen Lorde wouldn't let me take hormones until I quit smoking. This is because estrogen can cause serious blood clots in smokers. But, she recommended a good book, Allan Carr's "Easy Way to Stop Smoking." After reading it, I quit cold turkey with no cravings or side effects. It was great. I recommend it to any smokers.


After I quit smoking, I went back and met with my doctor. Basically, I just said, I want some hormones. She walked me through all the effects, potential effects and side effects, made sure I understood and then gave me a prescription. At Callen Lorde, they're used to the request. When reading other peoples' stories I hear about "gatekeepers;" non-transgender friendly medical professionals, who make trans people jump through numerous ridiculous hoops to get care.


Thankfully (and I am super thankful), Callen Lorde believes you when you say you want to live your life as the gender you're comfortable being! I was able to get HRT on my first visit after quitting smoking. Plus there's a pharmacy on the first floor, so you can pick up your prescription right there. It's great.

There's a one month visit just to check your blood and then after that visits are quarterly. My next quarterly appointment is in March. I'm looking forward to it. That'll be my fourth month on HRT.


So, to sum up, I love Callen Lorde. They are professional and supportive. And while they don't make you jump through bullshit hoops, they will make you jump through some hoops to show that you're healthy and well informed. And they'll make sure you're getting taken care of as a person as well.

Also I'd like to thank my very good friend, Jamie Clayton for telling me about Callen Lorde.


And I'd also like to thank the good people at Nerf Toys, a division of Hasbro, for making such fun foam dart guns. The perfect accessory for any woman. 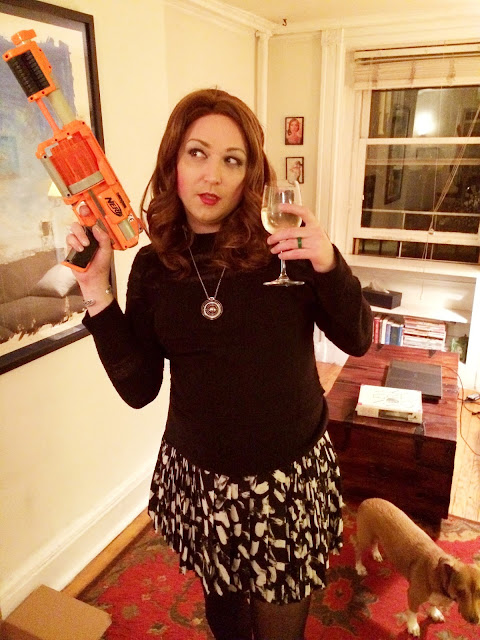 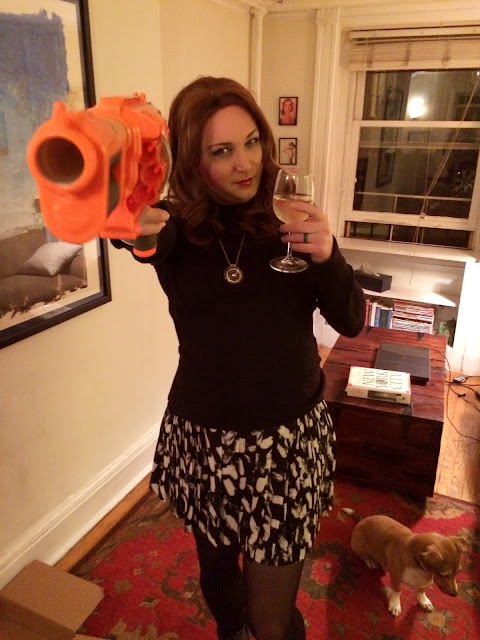 Posted by Faith DaBrooke at 7:06 PM