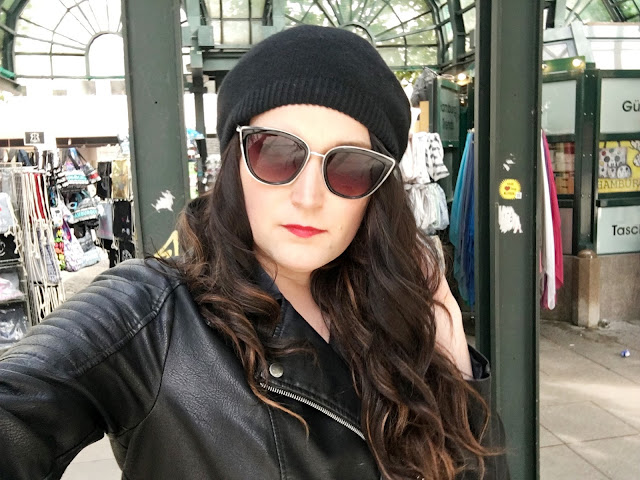 For our sixth day in Germany, Kath and I planned an excursion to Hamburg. Why Hamburg you may ask? It's because Hamburg is home to Minatur Wunderland- the world's largest model railroad! Yes, I love model railroads. You can be a cool transgender girl and still enjoy model trains okay!

Let's go back in time a bit. When I was a little kid, one of my favorite things in the world was my original VHS copy of the Star Wars Trilogy. I watched it so much that I actually wore out the tape of The Empire Strikes Back. But it also came with a bonus VHS of a making of documentary called From Star Wars to Jedi: The Making of a Saga. This I also watched numerous times.

My favorite thing about the making of special was all the amazing model work that was done on the Star Wars Trilogy. Ten inch tall stop motion AT-ATs on baking soda snow, the four foot long Millennium Falcon, eight foot long star destroyers. It was all amazing and I realized then that I wanted to be a model maker when I grew up. So I built miniature city-scapes, invented my own star ships out of trash, and even made historical dioramas which included details like forced perspective. And then I blew them up with fireworks. Because that's what they do in movies, right? Somewhere there are photos of the 8' x 10' scale model of Mos Eisley spaceport that I built with a hundred buildings, perfect 1/72 scale freighters and shuttles and plenty of moisture vaporators. Perhaps one day when my dad dies I'll dig through his hoarder basement and find them. (Quick side note, but I grew up with Star Wars. It was my childhood, and I thoroughly enjoyed The Last Jedi).

Well, I live in Brooklyn now so I no longer have room to build models or blow them up. But I'm still fascinated by the meticulous artistry that goes into well made models. So I was super happy when Kath got me surprise tickets to Miniatur Wunderland. How could I not be excited? Check out the video below.

We started out our Hamburg adventure with some good old fashioned getting lost. We were only going a half mile or so from the train station, but Hamburg is a medieval city with crazy winding roads. There is a no modern grid at all. So we ended up doubling back on ourselves, taking wrong turns, or taking correct turns onto roads that curved in the wrong direction! Well, thankfully we managed to navigate our way to Miniatur Wunderland! 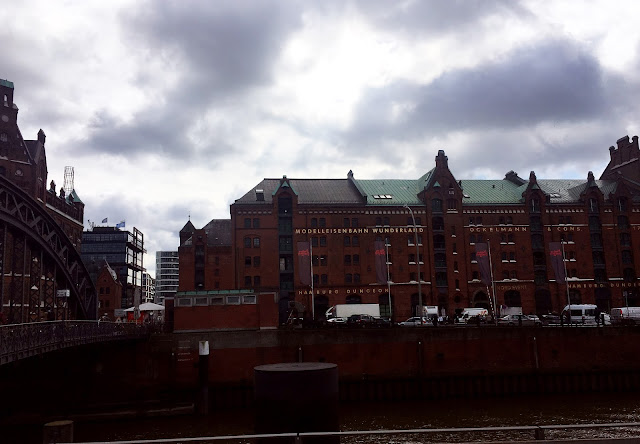 Okay, first off Miniatur Wunderland is amazing. The level of detail is absurd. Not only is there a ton of detail in every perfectly built miniature building, there are also realistic details like stains and corrosion under drain spouts, piles of trash in gutters, pot holes in the streets. It's insane. I could have stayed and looked at each section for hours. 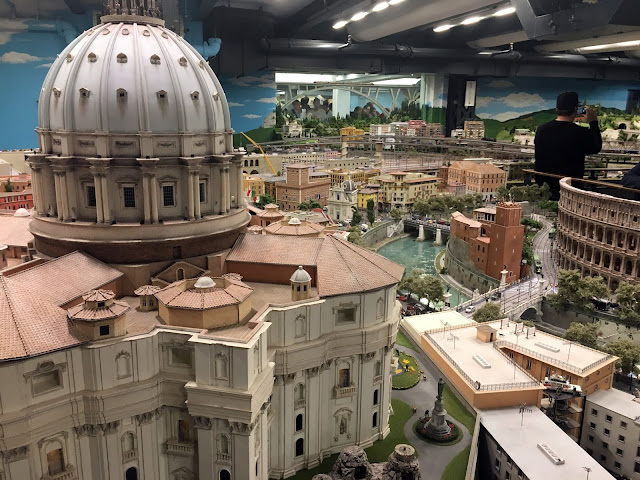 Unfortunately, there was one issue and that was that everyone wanted to stop and look at every section for hours. It was quite crowded even though we went on a weekday at lunch time. Sometimes it was hard to see a lot of exhibits unless you waited patiently for twenty minutes for people to get bored and move on the to the next one. We ended up having to double back a number of times to get a better look at things we missed. The massive airport set (which must have been fifty feet by a hundred feet or so) was a particularly strong crowd magnet. 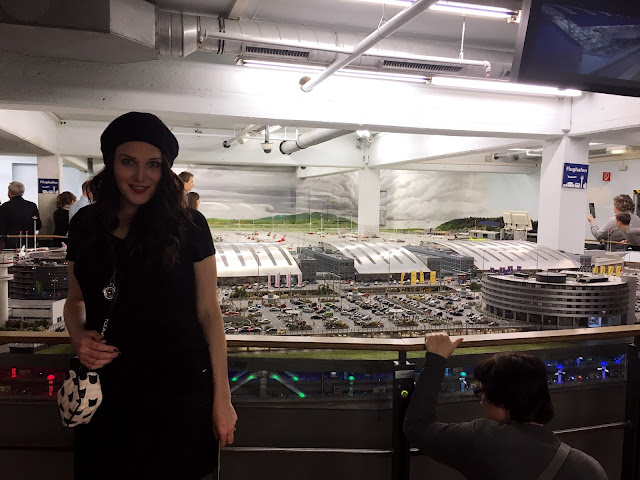 Miniatur Wunderland also goes through a day/night cycle every twenty minutes or so. This also means you have to double back as some sections are better seen during the day light and others look best at night. These cars in the tunnel look perfect at night. In fact if it weren't for the ceiling beams in the top left of the picture, I could swear this is a photo of a life size scene. 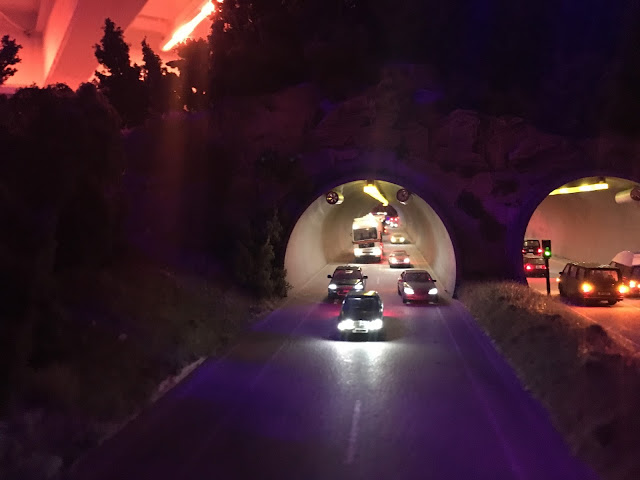 The sections are divided by country and there are at least thirty different countries and regions to explore. Here's the rusted hulk of a sunken ship in the Mediterranean section. 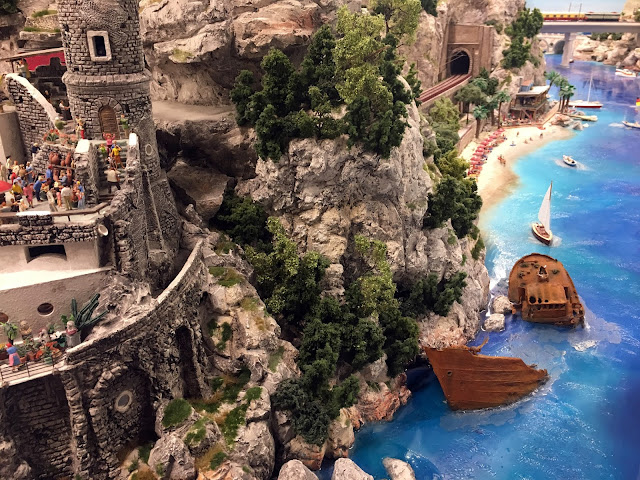 And here are some snowy factories from the Scandinavia section. 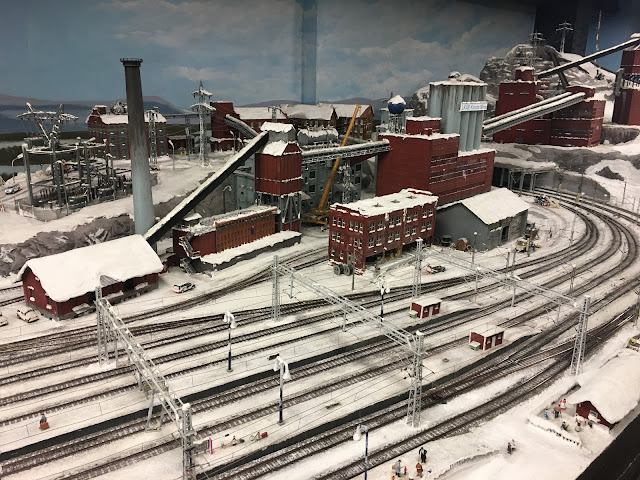 Beyond the giant towns built with incredible detail, the designers have also suck in hundreds of easter eggs. Every single display seems to have myriad hidden details there to spot the clever observer. Here in one underground bunker we found the Philadelphia Projekt's teleportation lab. 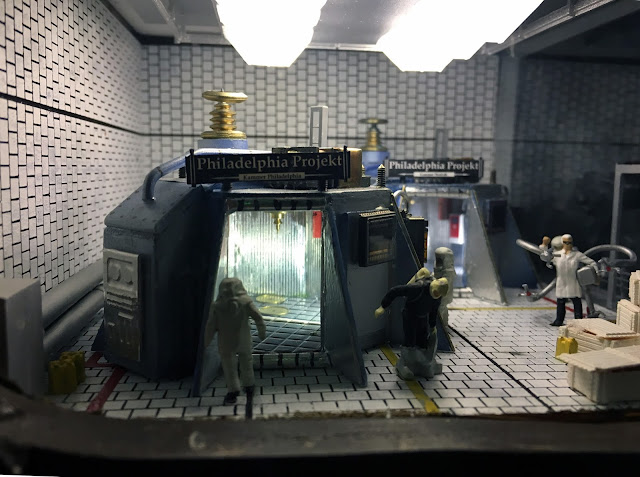 And on the gigantic airport we found a familiar looking YT-1300 model freighter. That ship is garbage! 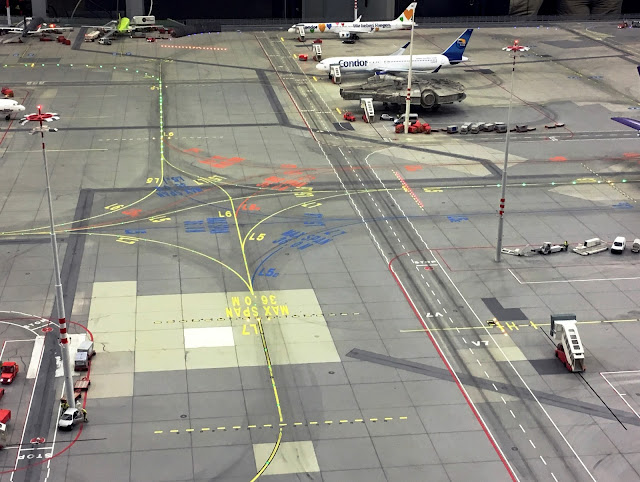 On the edge of a bucolic farm scene, here are the police and medical examiners recovering a dead body from a stream. 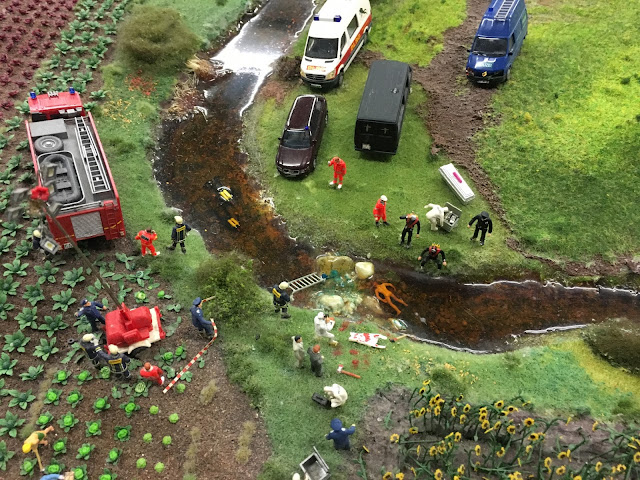 And this display of Neuschwanstein Castle features Kath popping up behind it! 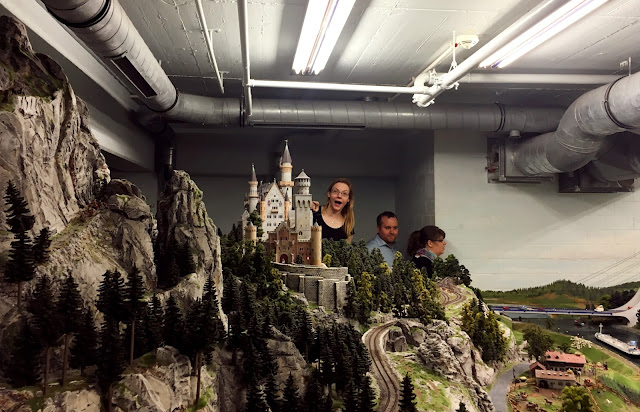 Obviously, this blog isn't entirely about model trains, so I'll spare you the many, many photos I took. Instead I'll simply say that you should check out Miniatur Wunderland in person if you have a chance to get there. Even with the crowds, it is well worth the visit. 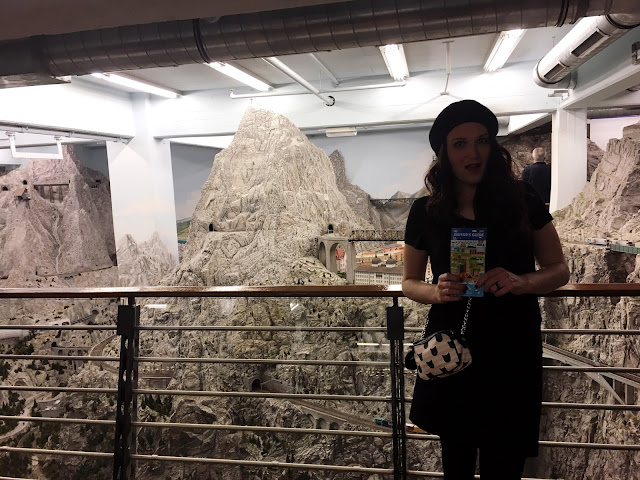 After a couple of hours of exploring model trains, we figured it was time to explore the rest of Hamburg. But first we stopped for a bier at the Miniatur Wunderland restaurant where the booths look like train seats. Don't you just love Germany? Even family themed attractions serve giant beers. 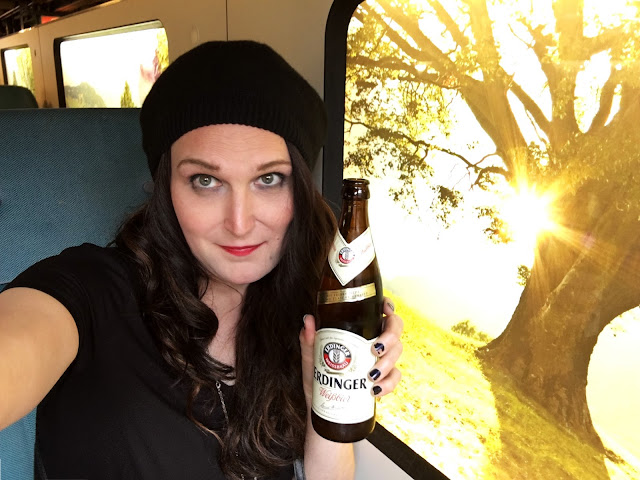 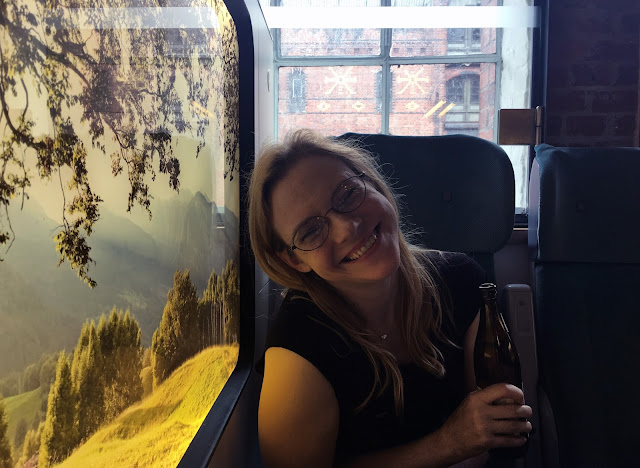 It was a kind of grey, chilly day but we walked along the Hamburg canals for a little bit, hoping to wind our way over to an area with a few gay bars. It was hopefully Hamburg's gayborhood. 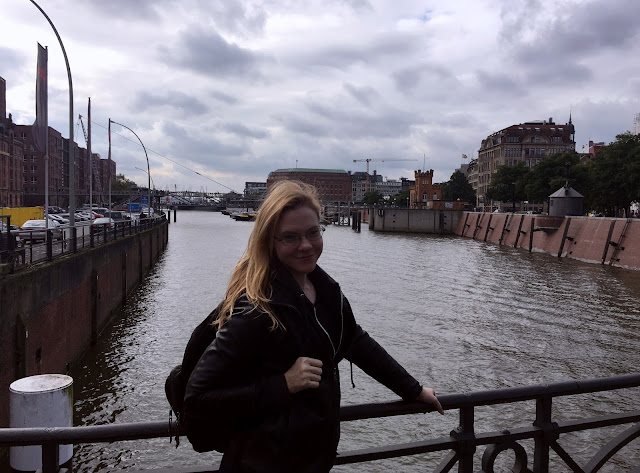 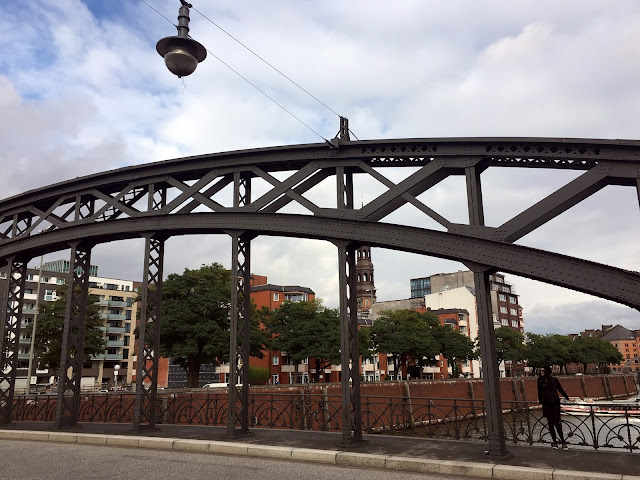 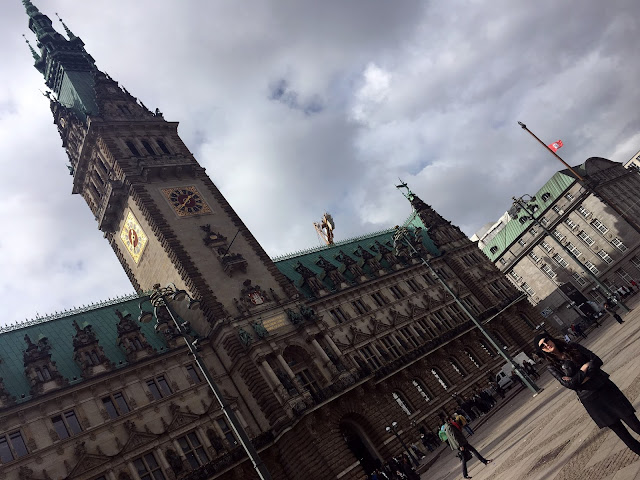 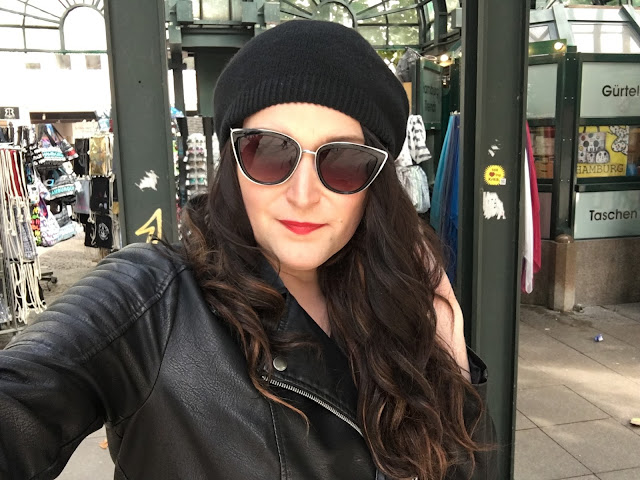 There wasn't too much to the gayborhood, except that we did find a number of bars and businesses with pride flags outside. It was probably because it was the middle of the afternoon. Hamburg's gay nightlife scene is probably like other cities' nightlife scenes- they get going at night. That's why it's called nightlife instead of afternoonlife.

There was a random square full of little groups of men drinking. It kind of weirded me out and I wasn't sure I felt entirely safe. It's hard to be a transgirl, or even just a girl, in a situation like that. Men, especially random groups of men standing around doing nothing, make me nervous. Thankfully we were okay. 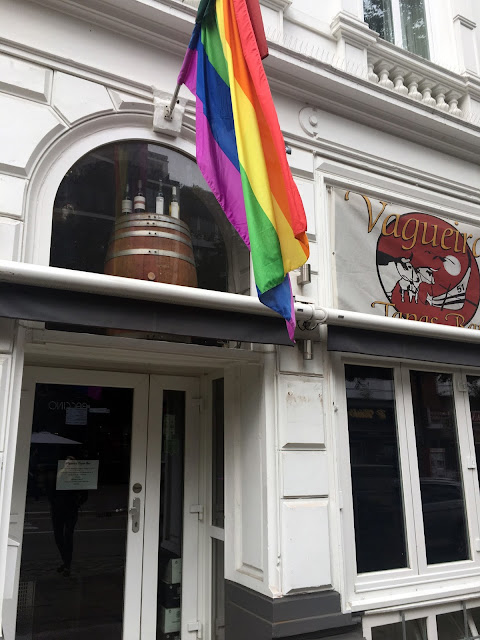 We eventually found a small gay bar fittingly called Gaybar Extratour. It was sort of an old man bar, but there were sexy beefcake photos on the walls. Plus they had pride flag coasters. We had a couple more beers. It was an okay bar, though like all German bars I wish it weren't smoky. Europe is ahead of the US on so many basic things like education, healthcare, politics, the environment, social safety nets, workers' rights, Kinder Eggs being legal, and gun control. But I wish they would catch up with us on banning smoking in bars. 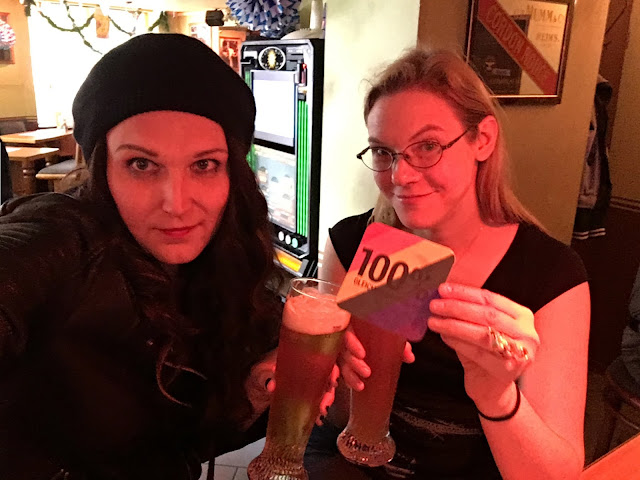 Well, when we got back to the hauptbahnhof, we were a little tipsy. Okay, we were drunk. In fact we were drunk enough that when I started joking about how fun it would be to eat a hamburger in Hamburg, Kath suggested we hit up the McDonald's in the train station. Also, we were slightly curious to see if McDonald's was in fact better in Germany (as we had heard). Honestly, it seemed about the same. But I did get to eat a hamburger in Hamburg. 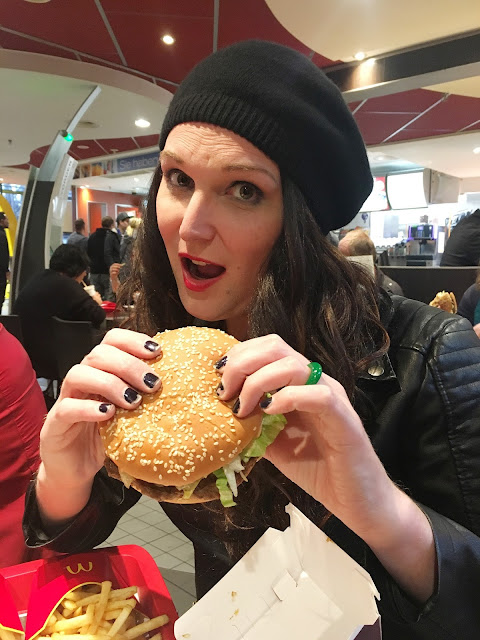 And yet on this whole trip I never ate a berliner in Berlin. Ah well. Stay tuned for the finale of our Germany trip.
Posted by Faith DaBrooke at 7:25 AM