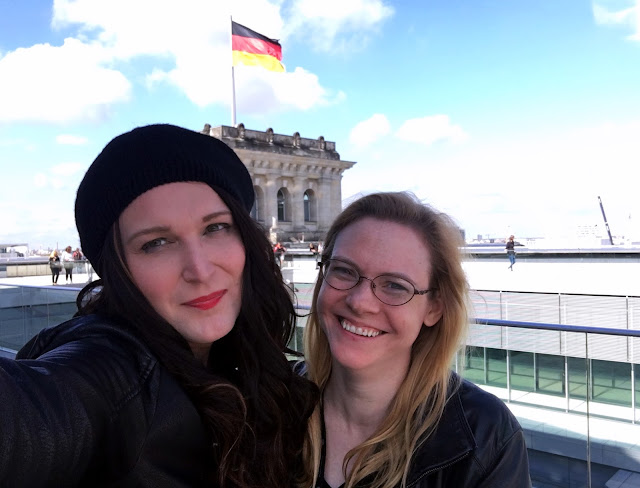 For our fifth day, Kathleen had booked us a visit to the Reichstag and a English-language lecture on the history of the building and of representative government in Germany. Of course I love history, especially detailed minutia, and so the lecture was really entertaining. Also, I got to learn some more about current German politics. We were actually touring just days before the big election. 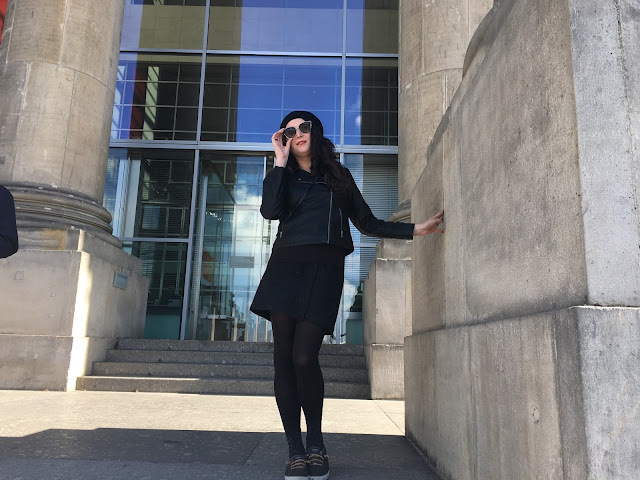 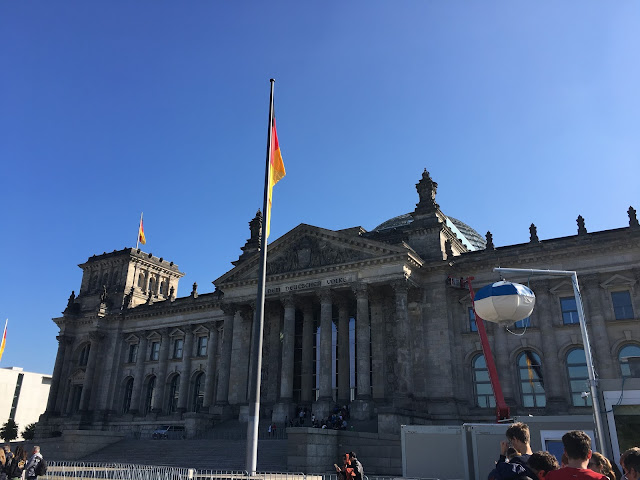 After the lecture, we hung back a little bit and nabbed a couple photos in the empty seat of Germany democracy. The giant eagle is the un-official symbol of German democracy and was brought to Berlin from the Bonn Bundstag after reunification in the early 90s. 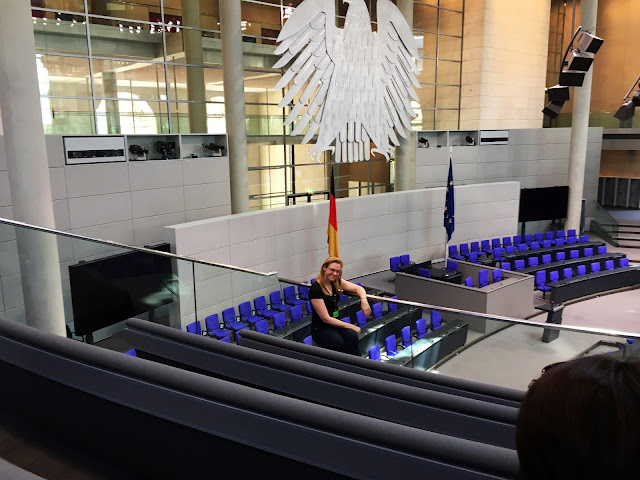 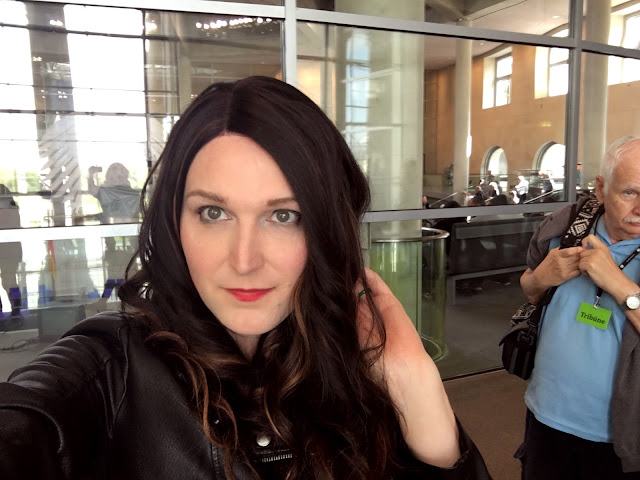 Afterward, we went up to the dome of the Reichstag. It was built after reunification and is brand new. The glass dome is about ten or fifteen stories high all on its own. There's a ramp that goes around the entire dome so you can walk up to the top. Plus there is a giant upturned mirrored pyramid/cylinder which I think is there to direct natural light to the main meeting room. 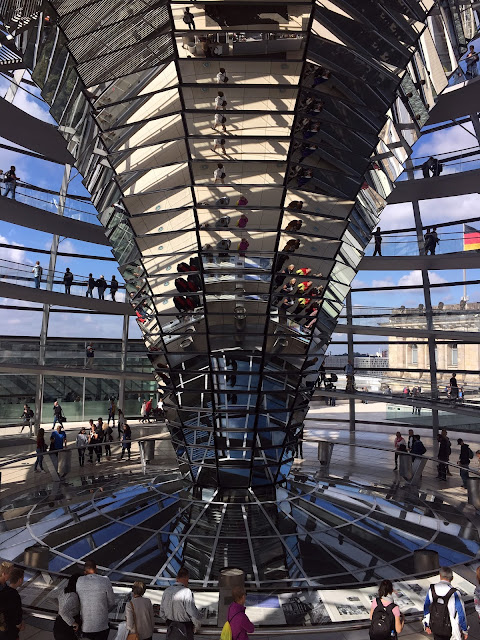 The thing about this that made me nervous (other than my natural fear of heights) was that there were hundreds, maybe thousands of junior high age kids. I swear there is something evil about kids when they are this age, maybe 12 through 15. For some reason, human beings become absolute monsters for those pubescent years.

As a transgirl I am super leery of groups of teens or pre-teens. I imagine a group of them walking past, clocking me, then making it a game to harass me or make fun of me, maybe even attack me. So all these groups of kids made me super nervous. Luckily, they didn't pay me any mind. Phew. 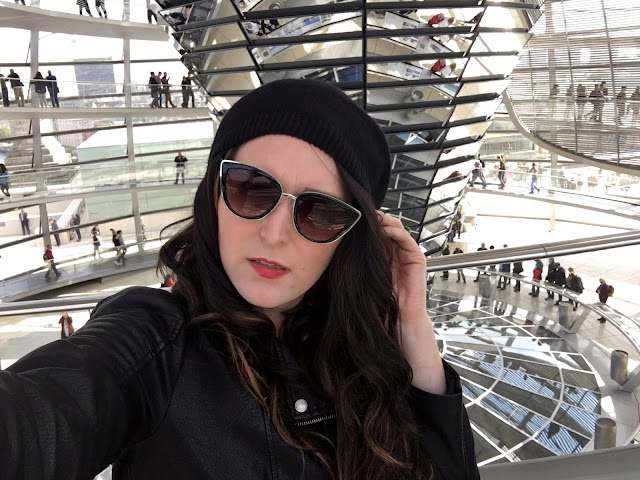 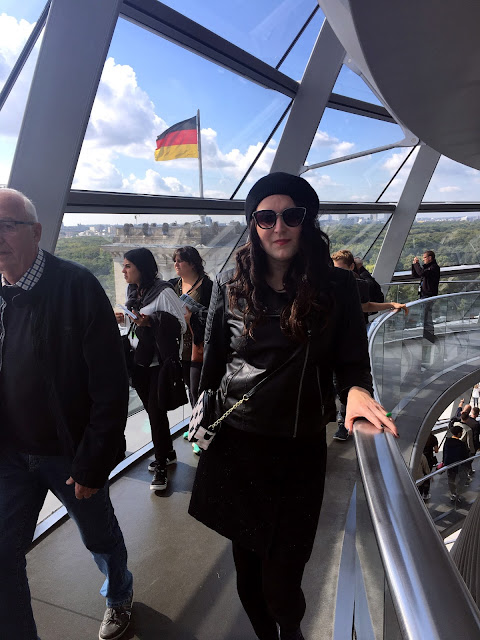 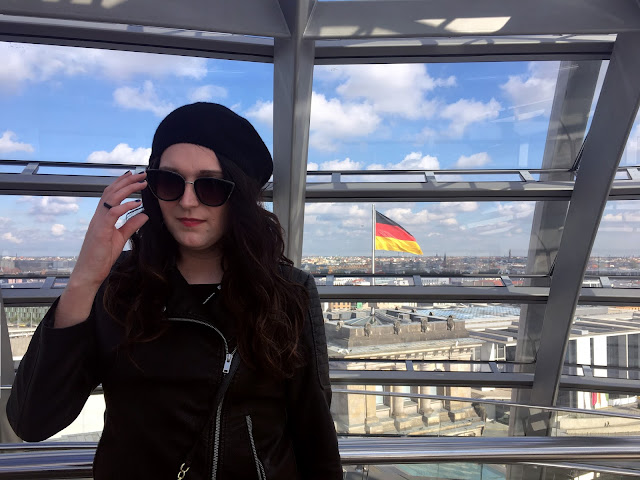 We went out on the roof of the Reichstag where there's a beautiful view of all of Berlin. We had great light so of course we took lots more pictures. Like the other areas of the Reichstag, there were a bunch of people on the roof. I was a little worried that I might get some stares or something, but everyone seemed to be ignoring me. Passing tip: try to stand next to a beautiful view so people don't pay much attention to you. 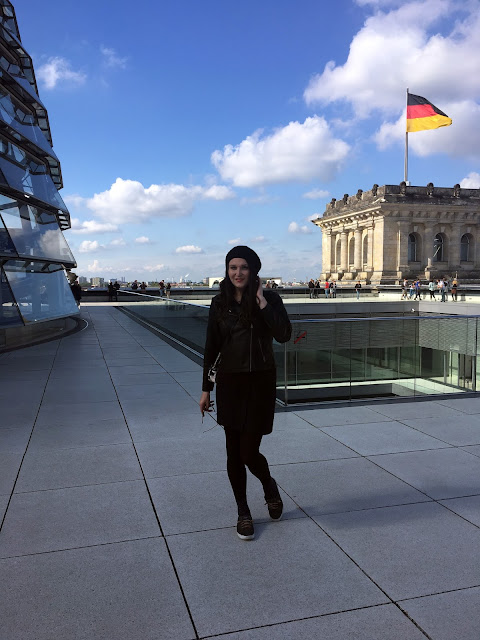 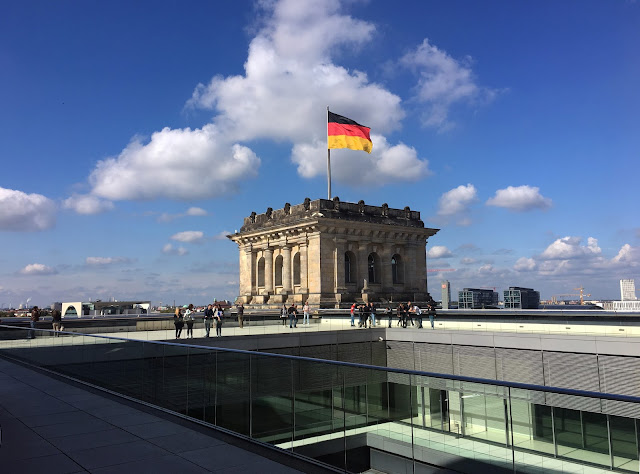 One really amazing thing I got to do was find the exact spot where the famous WWII Battle of Berlin photo was taken. It's one of the most iconic photos of the war and shows a Russian soldier holding up a Soviet flag over the Reichstag, signally a symbolic end to the Nazi regime.

While we were up on the roof, I downloaded the picture on my phone and we spent a little of bit of time trying to find the exact spot. The little pillar structures are all over the roof and most of the buildings one can see in the photo have been destroyed. But, the statues are still the same! We found the exact spot where the soldier was standing and I got a picture of me as close to the spot as I could get (there's no access to the edge of the roof obviously). It's one of my favorite pictures because I love the sense of standing at the exact spot (or near the exact spot) where major moments in history occurred. 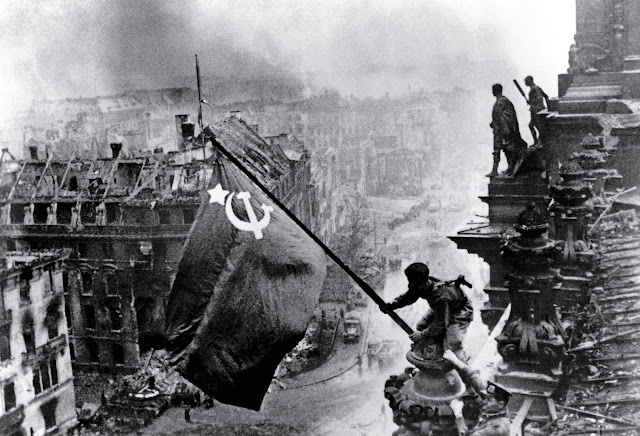 After the Reichstag, Kath and I wandered a little bit. We were staying in East Berlin and thus far on our trip had not ventured any further west than the Tiergarten. So we figured we would walk west towards Charlottenburg and explore the fancier (but less cool) parts of the city. 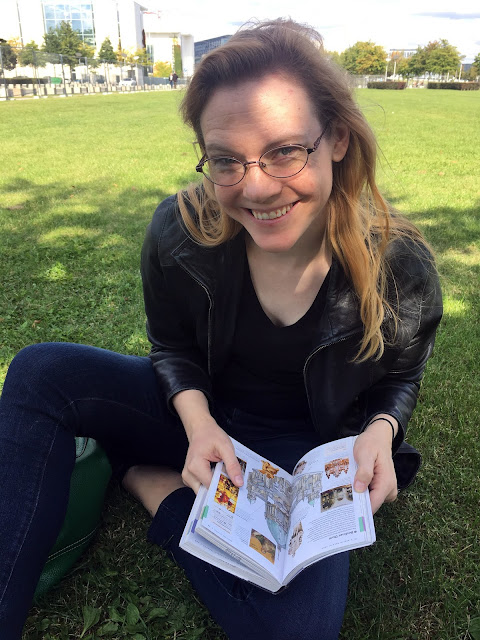 Though first Kath insisted on looking through her Berlin travel guide for interesting things to see and do in West Berlin. As I am one to eschew guide books of any kind (because I don't want to look like a tourist), I stopped to get a couple photos while we hung out in the giant park in front of the Reichstag building. 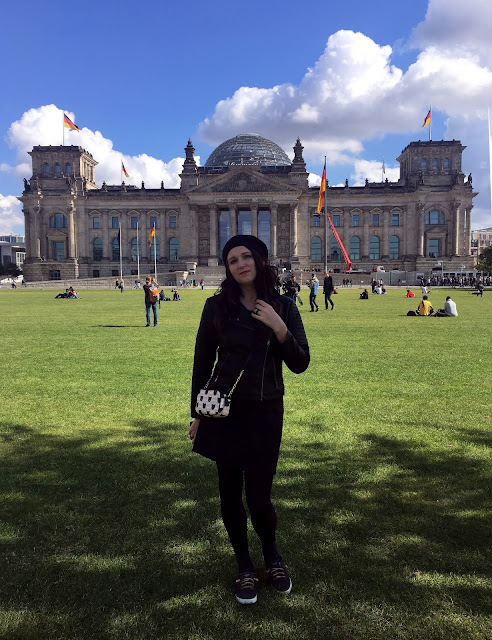 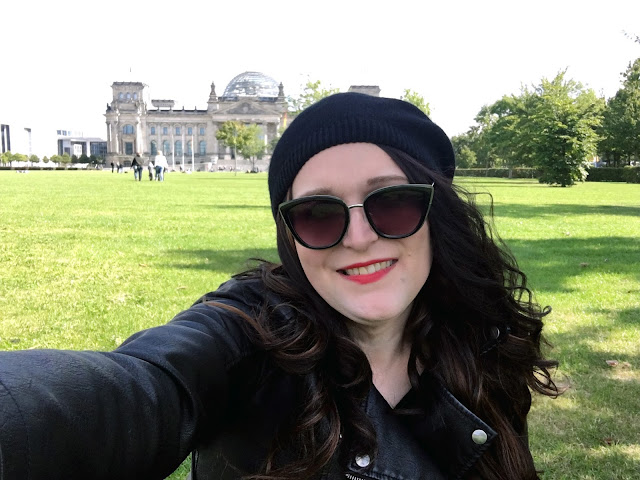 Our trek through West Berlin got off to a slightly rough start thanks to Soviet artillery. The thing is that most of the city was destroyed in WWII in order to help kill Nazis (a worthy goal if ever there was one). After the war, whole sections of Berlin were rebuilt in the styles popular in the 1950s and 1960s. So that means lot of square boxy buildings and lots of space between them. Post war architects and city planners did not like walkability. They liked boxes, spaces, and highways. And we got a lot of that in West Berlin. 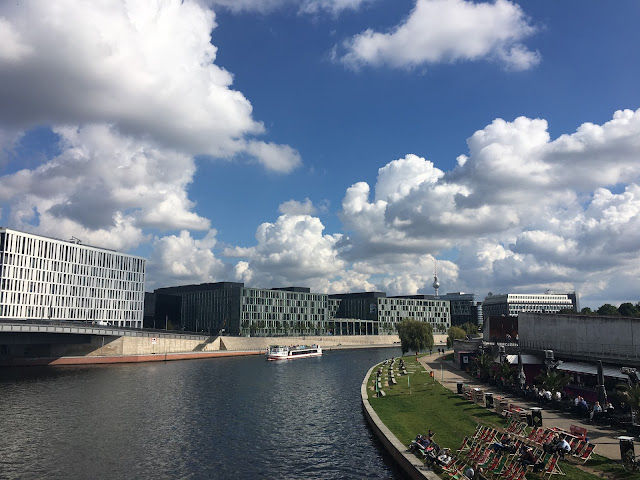 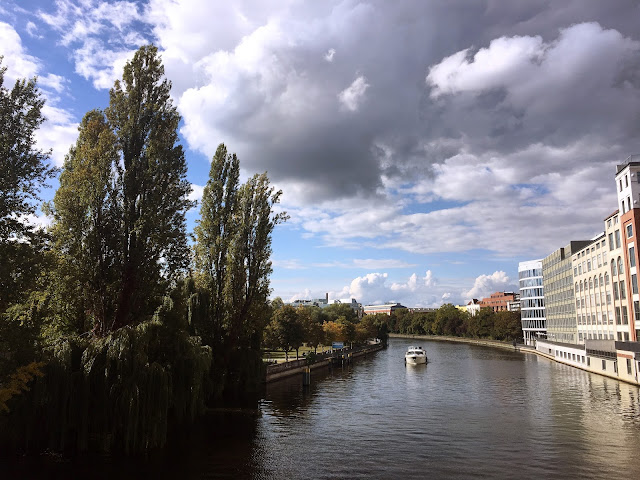 It took us a long while to walk to Charlotteberg. Hours. This happens a lot for Kath and me when we go exploring. At least once per trip we end up walking for hours in a non-desirable place. In West Berlin it was mostly empty office parks and universities. On a previous vacation we spent the better part of day making our way through the docks of Montreal. It's a hazard of exploratory travel. But it wasn't all bad. We did manage to stop for coffees that were essentially ice cream sundaes. So that was fun. 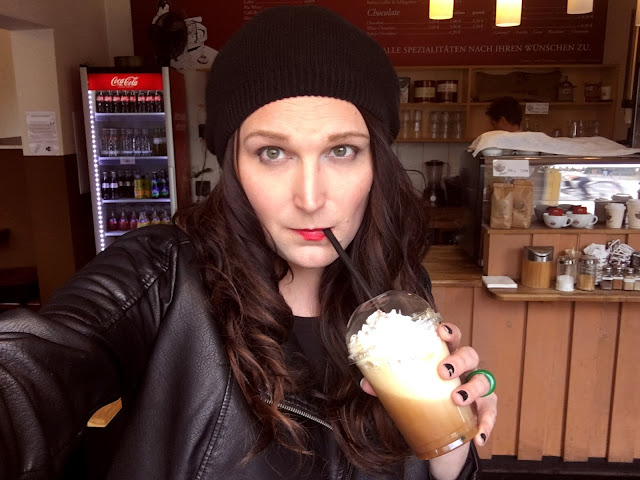 What we saw of Charlottenburg was pretty. But unfortunately, by the time we got there we were exhausted. We stopped in a couple shops, had a bier at an bar with outdoor seating, and then hopped on the U-bahn back to the East. What can say, we're East Berlin girls. 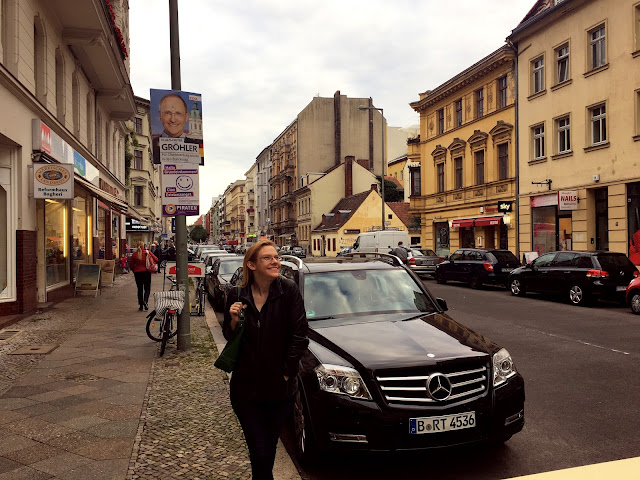 After we got back to Prenzlaurberg, we explored around looking for a restaurant to eat dinner. Back several years earlier, Kath had visited München in southern Germany. And she joked about how strange it was that there was a Mexican restaurant in Germany. And I was like "how could you not try the German version of Mexican food just to see what it's like?" As a lover of traditional German food, she balked at my suggestion. So, this time, when we passed a Mexican restaurant I insisted we give it a try. After all, there's no German food in Berlin anyway. Might as well try it. 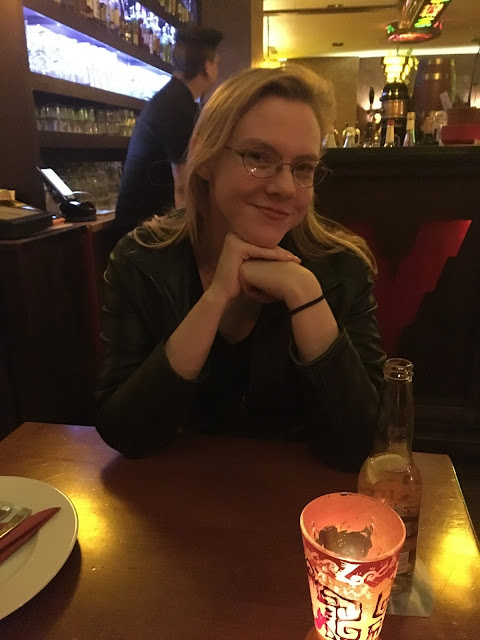 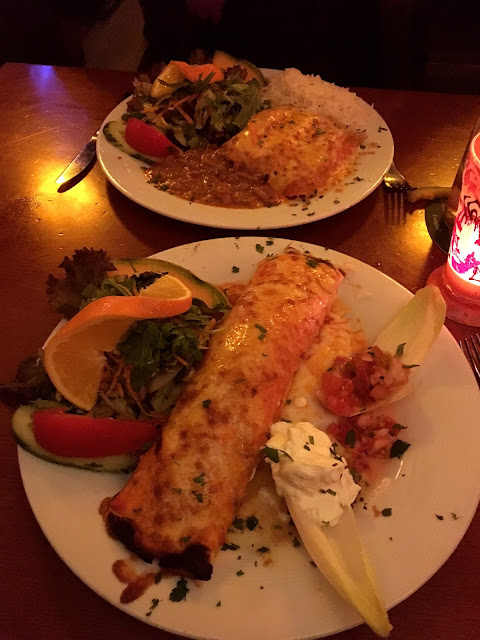 It was different. Well, for one thing it came with cantaloupe on the plate and that's weird. Also my burrito had basmatti rice like you would get with Indian food. You wouldn't think that'd make a difference, but it does. It's weird. Other than that it was cheese, tortilla and beef, which are hard to screw up. There was one issue though. It wasn't spicy in the least.

Nothing in Germany is spicy. They simply do not have spicy food. My American friend who lives there said that spicy food was the thing she missed most about the States. Kath and I now have dreams of moving to Berlin and opening up a restaurant called Capsaicin. We would serve vindaloo, buffalo wings, chili, burritos and other spicy food for American expats or adventurous locals. 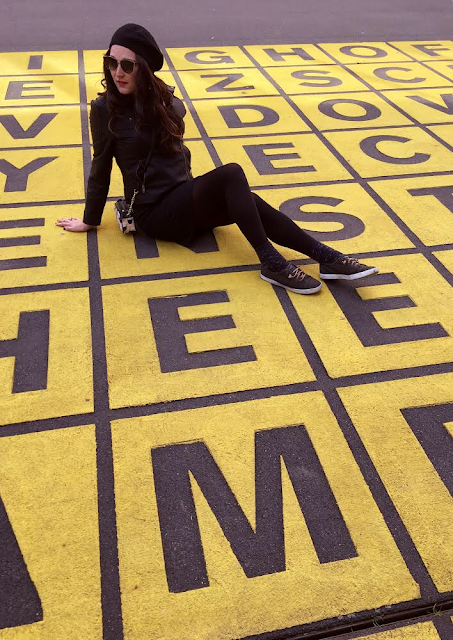 That'll be when we move to Berlin. For now we still had a few days left in our trip and we had way more Berlin to explore.
Posted by Faith DaBrooke at 9:04 AM