How I Go About Taking Pictures 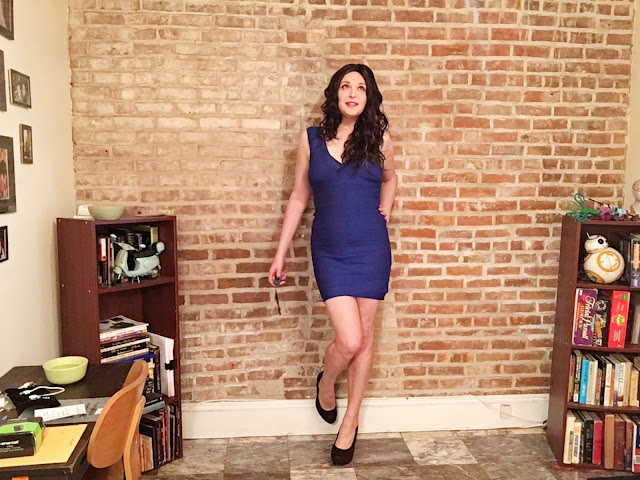 Over the years I've posted a few pictures on the internet. Not only do I enjoy taking photos and posing for them, from what feedback I've received, it seems like other people do enjoy them as well. From what I gather, it seems like everyone else in the world also enjoys taking photos and putting them on the internet too. So, I thought it would be fun (and maybe helpful) if I shared my own process for taking pics (like the many pics you'll see in this post).

The first thing that I do is try to plot out my clothes and look. For my most recent shoot, I thought I'd try and show off my new bodycon dress that I just got. See, I've been working out and one of my rewards for working out was a bandage dress. Well, I ordered it, but it wasn't quite what I wanted. That would explain why the price was so low. Ah well, I figured that even though it wasn't a real bandage dress, it would be a cool thing to wear in some pictures.

When I do a photo shoot, I also tend to go a little heavier with the makeup than I normally would. In this case, I did some more involved contouring, some bold eye shadow from my Urban Decay Electric palette. I even put on fake lashes, though like most times, I managed to put them on incorrectly. Luckily it doesn't show up in most of the photos. I mean, don't look too closely, okay. 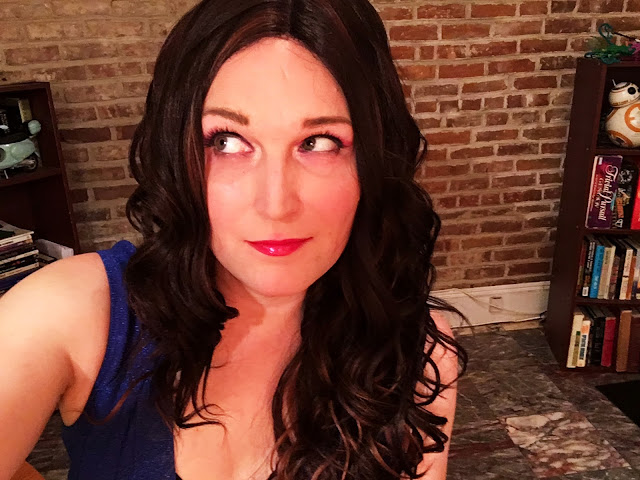 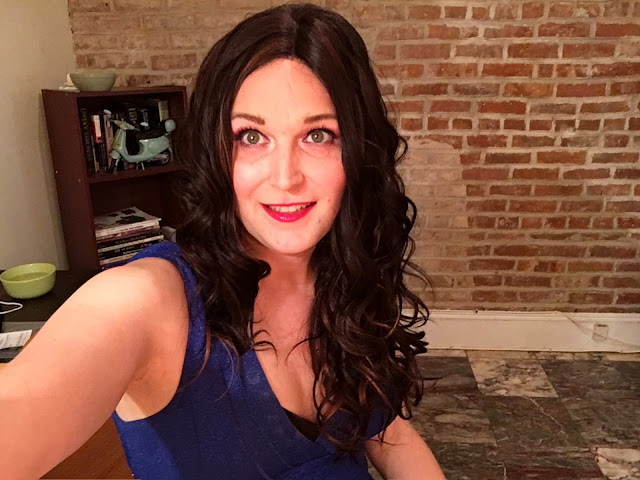 Next up was figuring out lighting. My old apartment in Queens had the best lighting for photos. It was a amazing. My current apartment's lighting is, well, not exactly amazing. But, luckily I've figured out some tricks that work. It just involves moving some furniture around. See, for photos you want diffused light. I've realized that I can get some good diffused lighting by moving my dining room lamps over to one side of the room. Combined with the ceiling light, it creates a pretty good illumination for pictures.

Outside it's much, much trickier. On the day I took these photos, I tried to go outside, but it was midday and the sun was too bright. Bright, direct sun creates high contrast and dark shadows. It's the worst for portraits. Plus outside it's not too private.

In general I like a tiny bit of privacy for pictures when I'm outside. It's hard to find. For one you've got to find a spot to place to the camera, that also has good lighting. It seems like half the time I find such a spot it seems to instantly become the most popular destination for local pedestrians. I don't love attracting attention and nothing attracts attention quite like standing in public in a crazy outfit and posing with your camera on a timer. It's not normal. And while normal is the last adjective anyone would ever use to describe me, I still don't enjoy standing out or causing a scene. So I stayed inside for the blue dress pics, especially since it's a slightly racy dress. 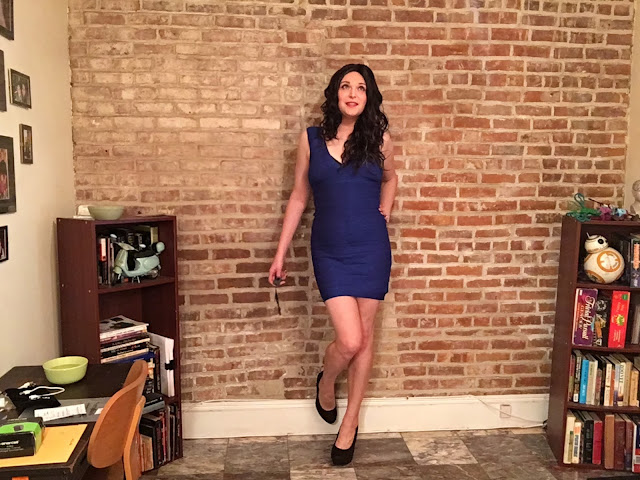 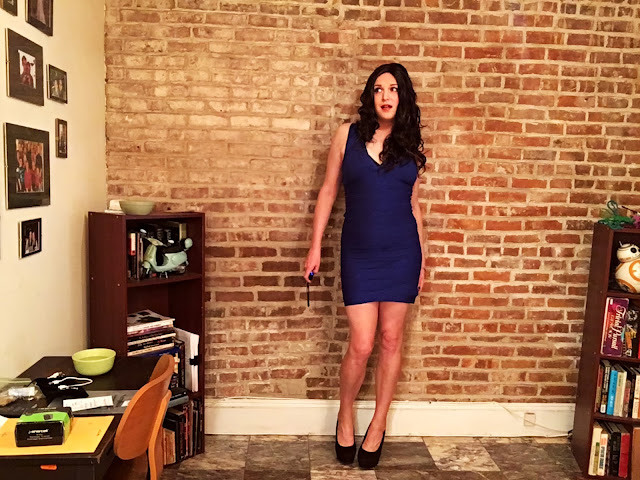 For my camera, I have my point and shoot camera and my iPhone. More and more, I find myself preferring the iPhone. Though I don't like that the timer takes a mini-video instead of just regular pictures. Also my point and shoot has a feature with the timer that takes three photos in quick succession. The iPhone doesn't have that, apart from the aforementioned mini-video. But, I just got a little blue tooth photo remote and that works great. You an probably see it in my hand in half these pictures.

Once I have the camera set up, I'll pose and take photos. In general, I'll take a bunch of photos, maybe 20 or so, while going through some basic poses: shoulders back, legs together, one hip out just a tad. I'll also run through a bunch of facial expressions. Those can be the hardest sometimes. Fake smiles look fake and you want to look as genuine as possible. I remember taking a recent photo of my new Garbage shirt. 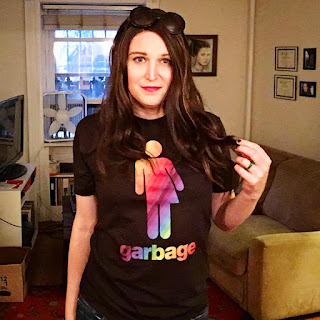 They're my favorite band and I wanted to send them a photo on social media to let them know how much this shirt meant to me. As a transgirl who's been a fan for twenty plus years, I absolutely loved that they made a shirt celebrating their LGBTQ fans. I must have taken forty versions of this photo. I just couldn't get my facial expression right. And I was sending it to the band! I really wanted to get it right.

Posing for photos can be hard. Sometimes you'll find yourself twisting your body into an attractive, but uncomfortable position. After one recent shoot, my shoulder muscles were actually sore the next day. But, it was worth it to get good pictures. 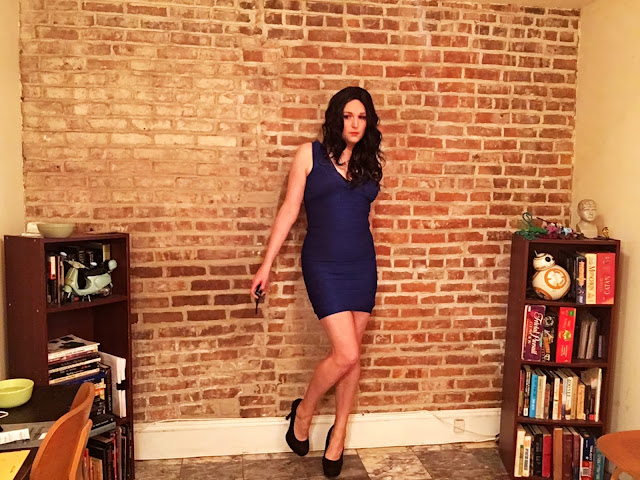 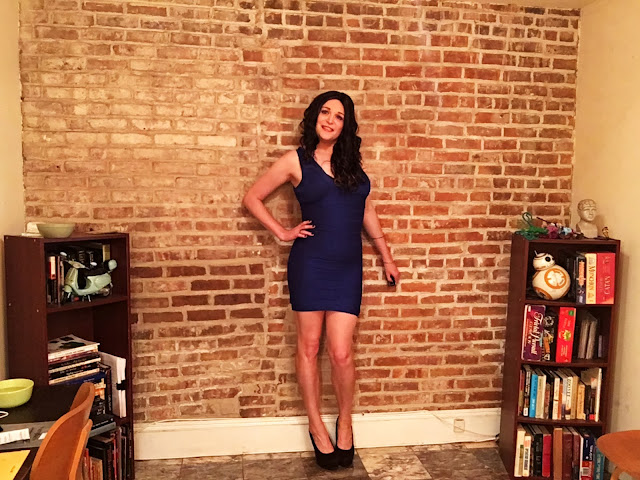 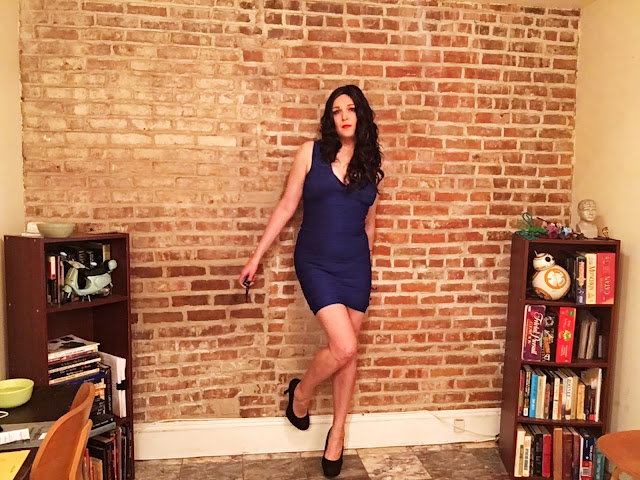 After an hour or two, I'm generally tired myself out. But, in that time I've taken a ton of pictures. I believe the technical term is a "metric fuck ton." For the blue dress pictures I took 933 photos. Now, the thing is, most of those were not good pictures. So the next part of this is going through those 900 photos and finding only the good ones. You have to do your best to not get discouraged during this process. This is how professionals do it. You take a ton of pictures to get a few good ones.

In some you're eyes might be closed. Or maybe the camera caught you making a weird look. I've been known to try to switch positions and trip. Some photos just end up unflattering. They'll catch you in such a way as to make you look like a wretch. But you have to pick the good ones and discard the bad ones and not let the bad ones bother you. 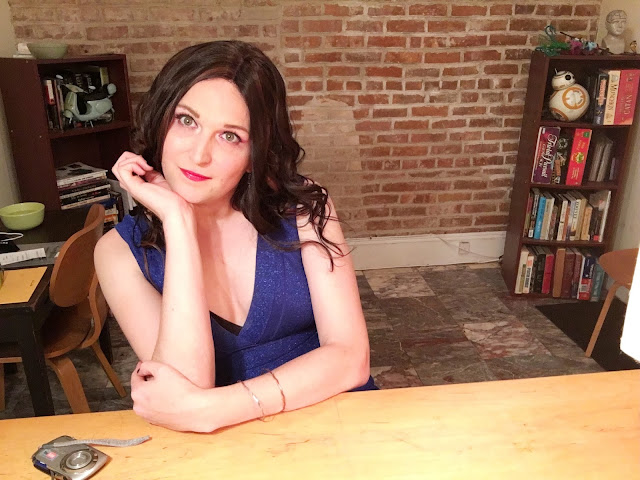 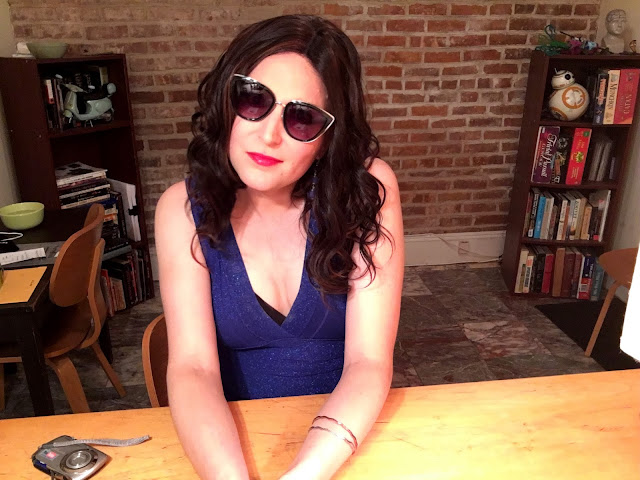 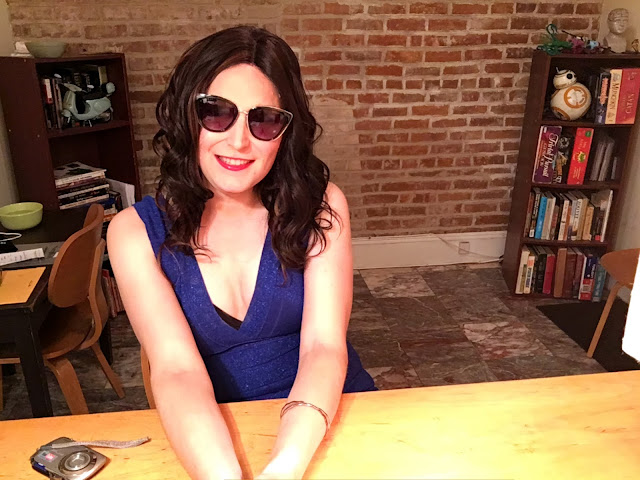 Once I've selected the maybe thirty or so good ones and deleted hundreds more, I'll open up Adobe Photoshop. I am a firm believer in photo optimization. Most of the lighting in my apartment is tinted yellowish, so color correction is necessary. For the most part I'll adjust the color balance and the curves. I tend to like photos with good contrast. And I also tend to redden the shadows and blue up the highlights. That works well for pale skin and gives my dark hair a slight auburn tint. Plus I just like how the slightly warmer photo looks. Sometimes the auto-adjust feature will give me what I want, but for the most part I prefer to do it manually.

I used to do darken my brows, lips and contouring in Photoshop. But after looking at a few cringe-worthy things I produced, I try to keep the dodge and burn tool to a minimum. I am not above using smudge to put a crazy brow hair in place. And I'm also not above using liquefy to give my pupils a pop. They get all that in magazines after all, and it's only fair.

Instagram filters are also a fun way to optimize photos. I really like Instagram, though I think in general I use their manual tools almost as much as I use the filters. The funny thing is, I have mild deuteranomalous color blindness, but I still think I have a good eye for photos and color balances. My color blindness is quite mild and all I've ever noticed is the inability to distinguish green and orange under very specific circumstances, such as when they're close to each other on an LED screen. Because of this, though, I've always wondered if maybe my pictures all look insane to normals and no one says anything because they think I'm trying to be avante garde or something. Hopefully you guys would be nice and let me know. 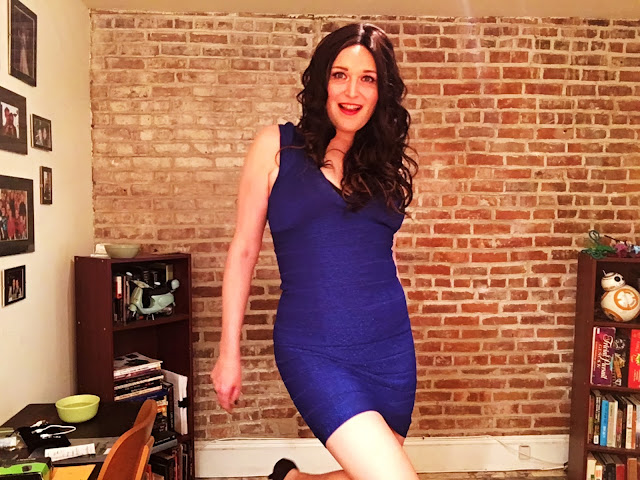 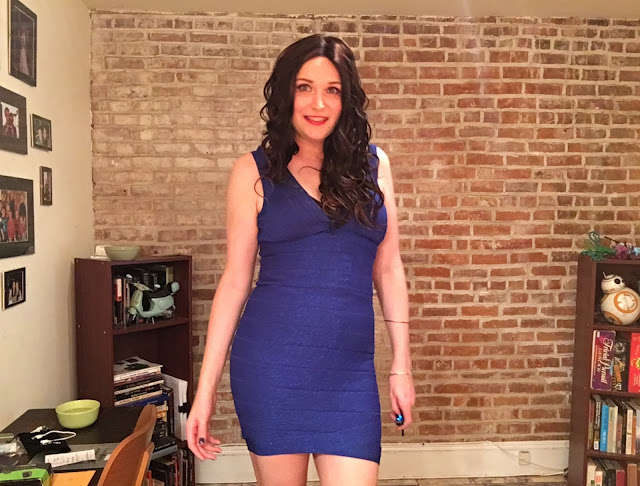 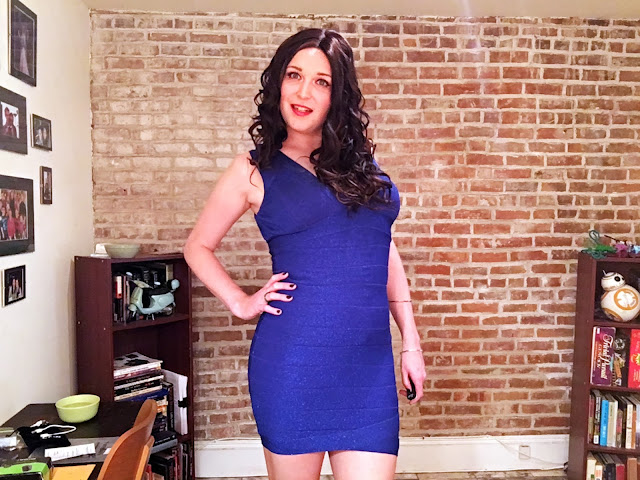 So that's my general process for taking the photos I post up here and on social media. You can also check out my How to Take Great Pictures infographic as well. Photos are fun. How do you take yours? Let me know - I'd love to hear.
Posted by Faith DaBrooke at 12:47 PM

Email ThisBlogThis!Share to TwitterShare to FacebookShare to Pinterest
Labels: how to guide, Photo shoot