Faith the Aviatrix (Part One) 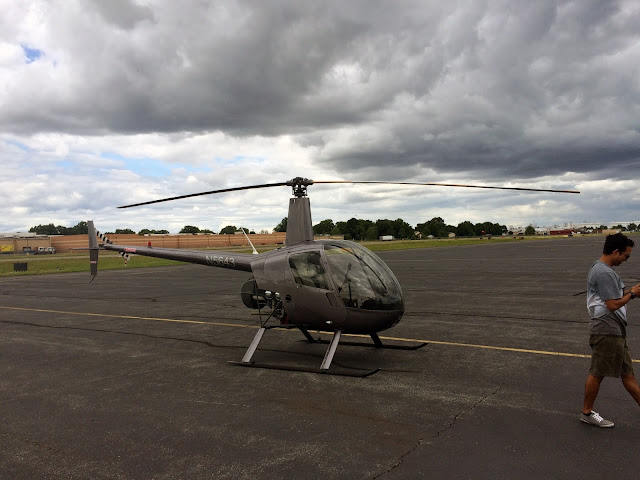 A few days ago I went all the way out to Linden, NJ (a 20 mile drive that involved two trains and an Uber because hey, I live in Brooklyn and don't have a car). The reason for that trip was so that I could fly a helicopter. And not ride in a helicopter. I mean fly a helicopter as in I'd be flying it. The controls would be in my hands. Sadly, I wasn't able to fly because it was too windy. Sadly, we got back on our Uber and skulked back to Brooklyn, along the ground. Yes, along the cold, hard, mossy ground because our adventure on the bird roads was not to be.

Of course, I've never been one to give up. So we were determined to go back and conquer the air, come hell or high water. Also, we had paid and they obviously let us reschedule. It still involved a good hour and a half of travel though. And I had to get up kind of early on a weekend day. So, see? I'm intrepid as hell. Also, I'm a pilot. Better than that, I'm a barn storming, hellion of the sky girl pilot like Amelia Earhart or Amy Johnson or Irina Sebrova or Gadget from Chip & Dale's Rescue Rangers.

We got there a bit early and had to wait around a little while. My girlfriend was super excited but I was trying not to get my hopes up. Having had two cancellations in a row, I was dreading a third. While we sat there waiting, it even started to rain a little bit, though luckily it was just a squall that quickly subsided. Still, I was worried that we'd be sent home again due to weather conditions. Obviously, I was not so worried that I didn't take the opportunity for a selfie or two. 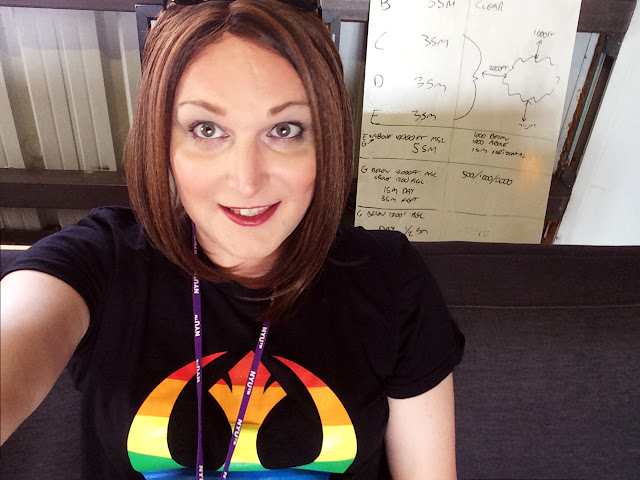 The rain passed quickly, though it was still cloudy out. It seemed almost like a perfect day. A couple more people showed up to take their lessons and we all sat around on the couch waiting. A few of us fumbled with lanyards and rubber bands. There can be no loose items in the helicopter (lest the fly back and get caught in the tail rotor) so if you wanted pictures, you had to attach your phone to a lanyard. As someone who had been there before, I brought along my own lanyard, making sure it was long enough for some good chopper selfies. Assuming we actually got to fly that is.

There was still a cold feeling deep in my gut and the worry of being sent home a second time stayed with me all through the training session and overview. Finally, the instructor finished, said we could choose our options and then they'd let us know what order we'd be flying in. My girlfriend and I walked out of the office and started chatting a little with a couple of the pilot instructors. 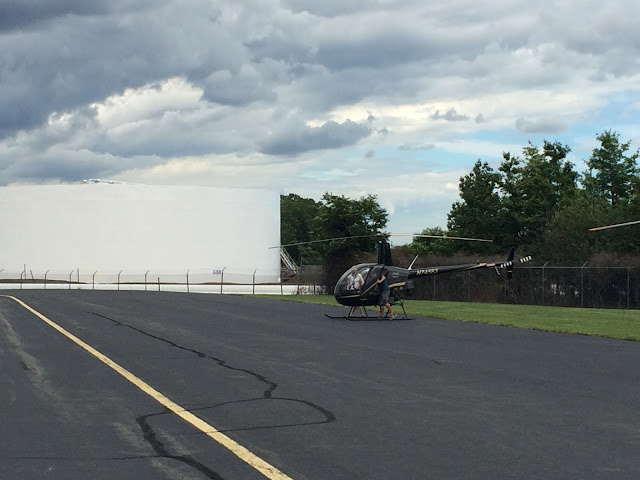 There was talk of needing to fuel up the helicopters, so we figured there would be a long wait. I, for one, was worried about the weather changing for the worst during that time. For a few minutes I sort of understood what it was like to be at NASA control, knowing that the thing you were really looking forward to might not happen and there was nothing you could do about it. 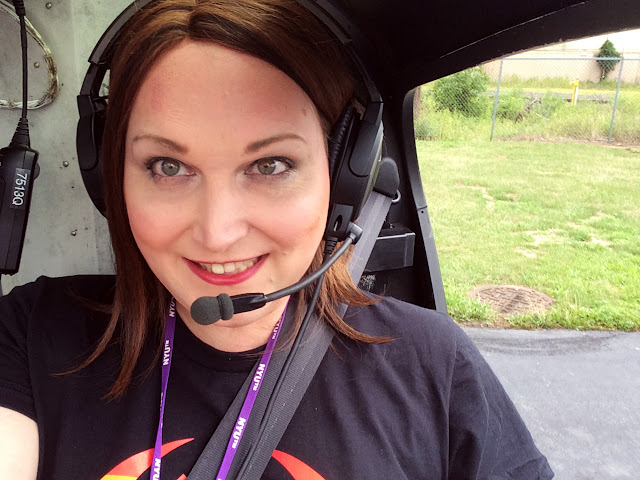 Walking over, I climbed in, deathly afraid of accidentally pulling the wrong lever or flipping the wrong switch. After putting on my headphones I buckled in. What was really surprising, and incredibly scary, was that there were no doors. Literally no doors on the side. Nothing. And the seat belt was just a regular seat belt like you might have in a Prius. Yeah, so I'd be going up to 5000 feet in the air with nothing but a regular seat belt to keep me from plummeting to my death. Did I mention that I'm terribly afraid of heights? Fun! 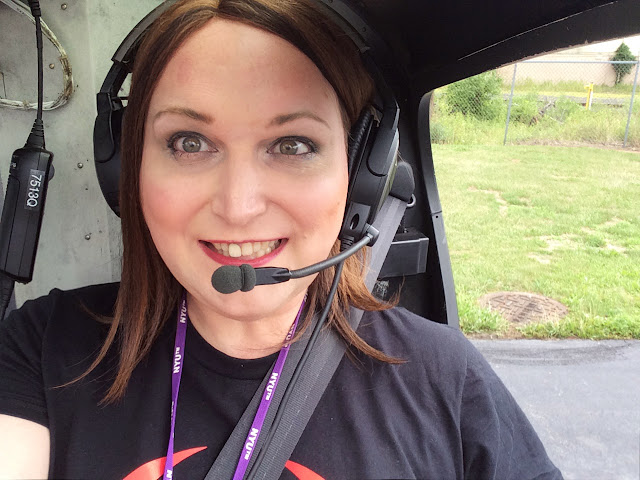 Eventually, we took off. It was rather surprising to simply rise up in the air. All the other times I've flown it's been in planes that took off with long run ways. The helicopter just went up. One second we were on the ground and then the next second we were fifty feet up in the air. I crossed my arms tightly against my chest (the only way to ensure I didn't touch anything I wasn't supposed to) and off we went.

My first helicopter ride lasted about three minutes. We went up about fifty feet, around some buildings, and then over to another part of the airport where we landed to refuel. Honestly, I must say it was nice to have a first flight so I could get a little more comfortable in the chopper. While I was a little nervous on that first flight, I must also say it was pretty damn cool to really be flying around in a real life helicopter. It was, in a word, awesome. It was, in two words, fucking awesome. It was, in one portmanteau, fuckawsome. Okay, maybe scratch that last one. 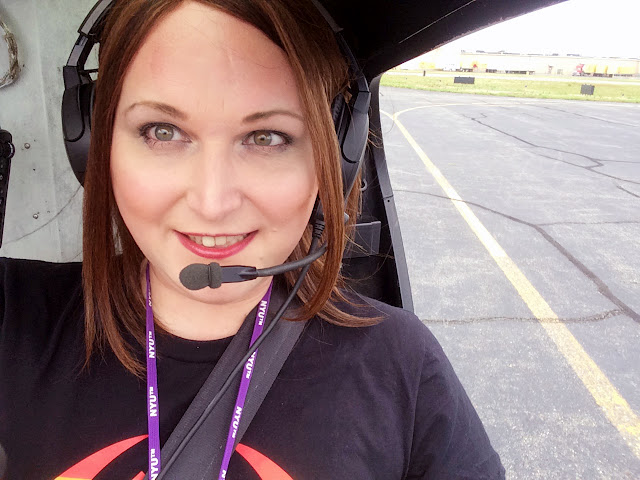 It took a little while to refuel, but then we were totally ready to go. Not only had I paid for my first lesson, I'd also opted to fly at the same time as my partner (so we could get pictures of each other) and I opted for a longer flight which would allow us to take a thirty minute trip instead of a ten minute. Unfortunately, while the helicopters did hover about a hundred and fifty feet apart for a brief photo op, all we had were iPhone cameras which didn't quite give you the zoom needed to really see the other person in their chopper. Ah well. We'll always know that those seven pixels are us. Here's my partner: 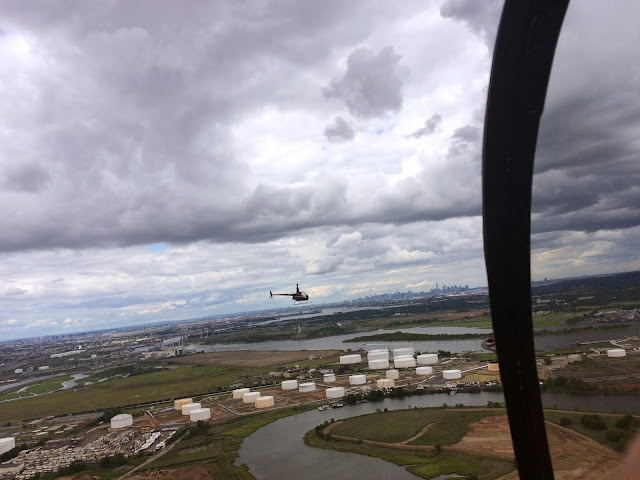 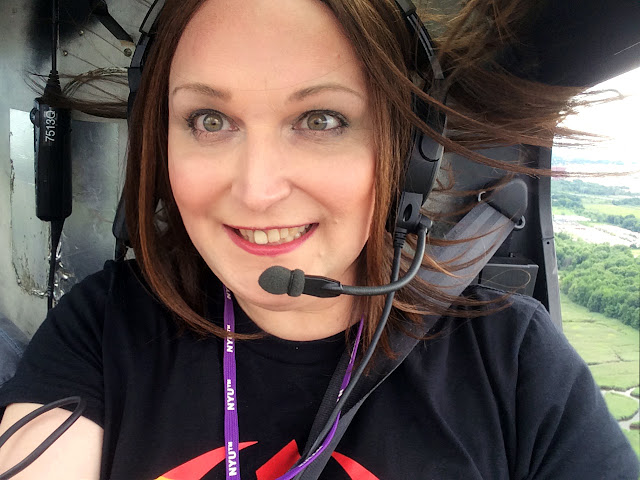 Quickly, we zoomed high over the suburbs and factories of New Jersey. I was glad to have some time in the helicopter before I took the controls. The scariest thing was probably the wind, which was buffeting us around like crazy, shaking the copter back and forth and up and down. Luckily I'm pretty immune to motion sickness. Still, it was rather scary to be so high up, vibrating like crazy, with nothing but a thin strap of fabric to keep you from plummeting to your death. 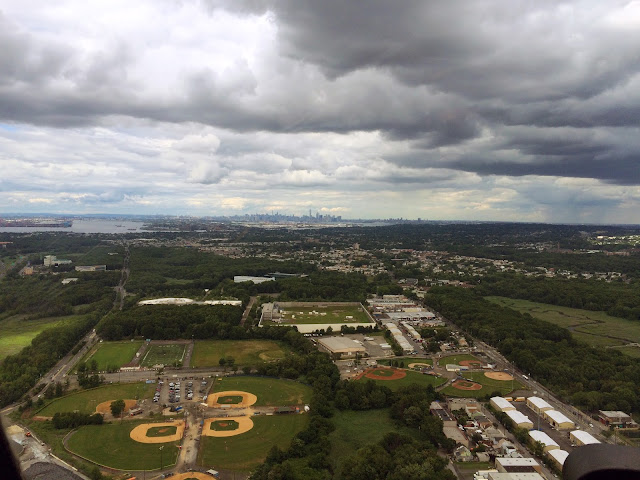 Seriously, I wasn't even looking when I took most of the photos. I just held my camera near my chest and snapped a ton of pictures. I wanted to see these views with my eyes, not through a camera screen. And what views they were! My city was on the horizon, the silver spires of the island of Manhattan growing closer with each passing moment. 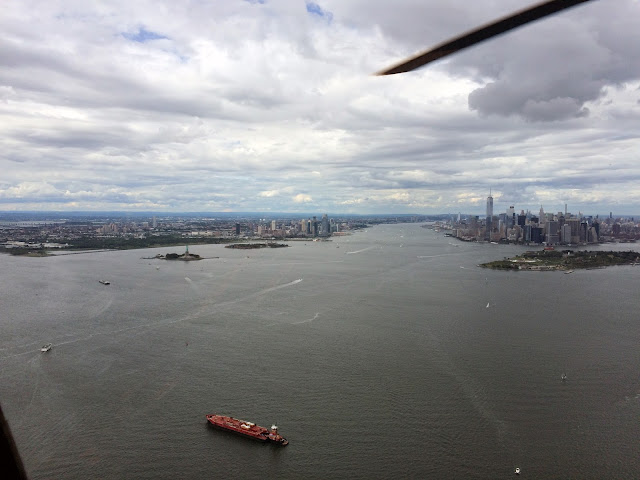 As we left New Jersey and Staten Island behind, heading toward the skyline of the mad, extravagant city that I call home, I marveled at the views, did my best to control my fears, snapped a few selfies and steeled myself for the moment when I would finally take control of the helicopter - the moment when I would fulfill my destiny and become an a real aviatrix! 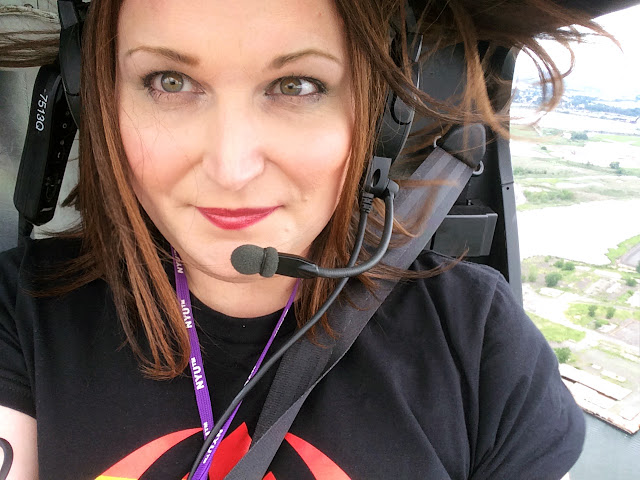 Stay tuned for Part II...
Posted by Faith DaBrooke at 8:01 AM