Out Shopping in Winter 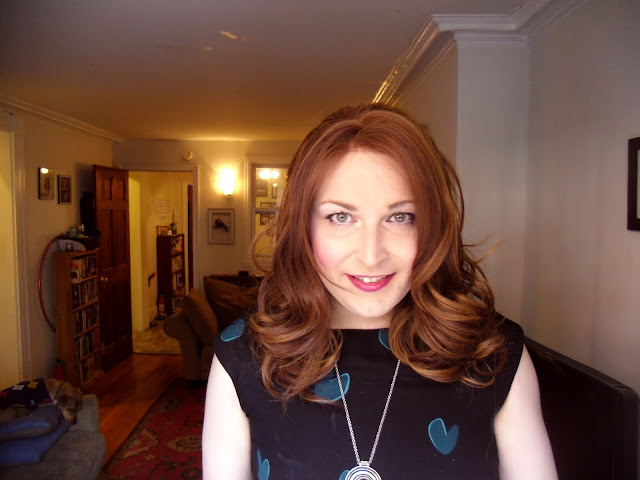 Despite the early part of winter being quite mild, winter came in like a storm this February, bringing super cold temperatures and a good amount of snow. What's a girl to do? Well, certainly not let cold stop her! So, I donned a sweater, a coat, a scar, hat, thick tights, socks and my new knee-high boots to go out.

Yes, I recently got some new boots from Aerosoles. Knee-high riding type boots have been in fashion for the last couple of years, but I've put off getting them for a couple of reasons. First was the expense; I just couldn't find a decent pair for less than $100 bucks, and second was the fear that flat boots would make my feet look too big. Seriously, I tried a pair on last year and I thought they made my feet look ginormous! But, I tried on a pair at the Aerosoles store and they were super comfy, even if they did make my feet look a little big. It turned out to be a great purchase, what with the snowy, slushy, rainy winter this has turned into. It's definitely not sandal, heel or ballet flat weather. So my feet might look big, but at lease they're dry. Besides, who really looks at feet anyway? 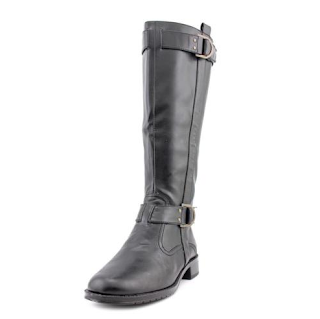 So, with my new boots on, I set out to Callen Lorde to pick up my prescriptions (go, estrogen and t-blockers!) and, since I was in the neighborhood, decided to stop by Brooklyn Industries and check it out to see if there were any cool new items. As some of you know, I have owned a couple Brooklyn Industries dresses and one purse and I love the quality of the items. For the quality, they aren't even too expensive, since, unlike a $14.99 H&M dress, these will probably last for years and years.

Brooklyn Industries has just put out a bunch of new stuff (all of it in my size), so I took a look around and grabbed three dresses that I liked. A friendly staff-member opened up a fitting room for me and added "This one has the best lighting." Thank you, sir! Here's a man who knows what a lady wants! 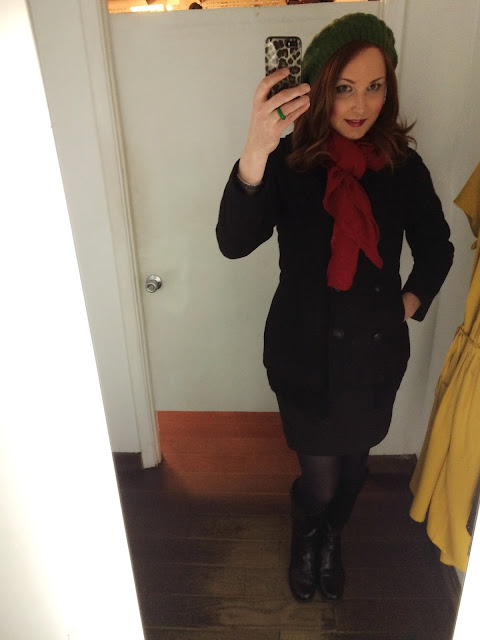 Brooklyn Industries has just put out a bunch of new stuff (all of it in my size), so I took a look around and grabbed three dresses that I liked. A friendly staff-member opened up a fitting room for me and added "This one has the best lighting." Thank you, sir! 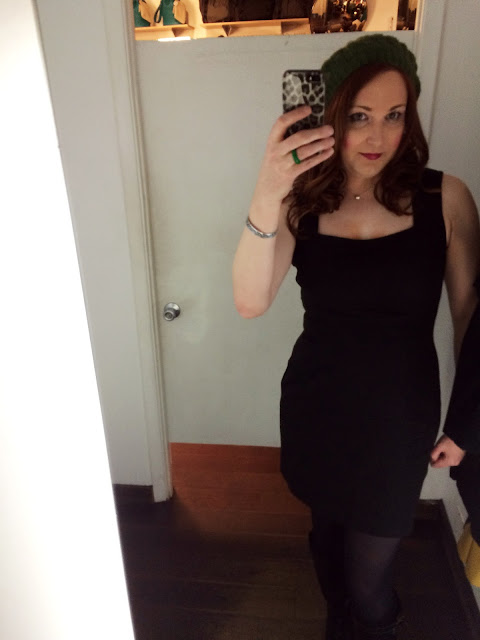 No, I totally can't get away from the little black dress. I actually wore it out shopping. Seriously, I'm terrible when I get a new outfit I love. I just want to wear it every day. In that way, I'm much like a six year old. Also my favorite foods are chicken fingers and mac & cheese, which is another one of the ways that I'm like a six year old.

The first thing I tried on was a gross, mustard yellow dress that was so huge and shapeless it felt like I was wearing a painter's smock. When I saw it on the hanger, I thought it might have been a cool, retro-ish dress, like something from the 50s, but no. It didn't look good at all. I didn't even take pictures of it. You know something looks bad when I won't even take a picture in it. Then again, it felt like they had a whole line of shapeless dresses like that. Like this season, big, shapeless piles of dress are in fashion. Especially if they come two-thirds of the way down your calf like you're a Mennonite, but like a slutty Mennonite who likes to show way too much ankle. 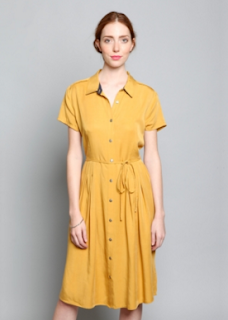 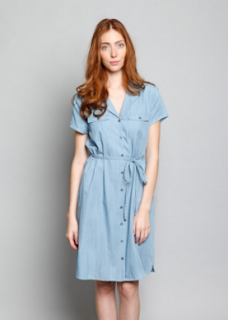 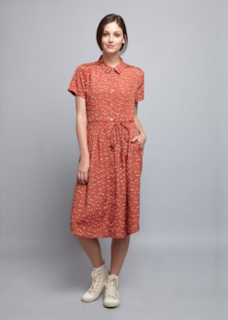 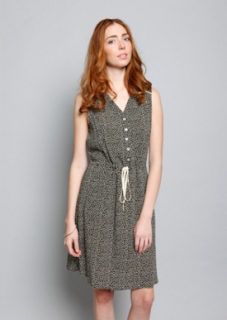 So, I did end up trying on this blue one. It looked a little better than the mustard-yellow, but it still wasn't quite my style. It was a little too long and bunched up oddly in the waist. I think that may have been with the belt that ties around. 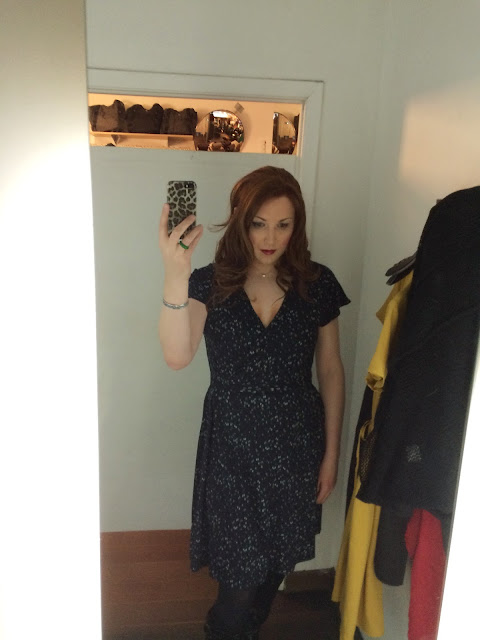 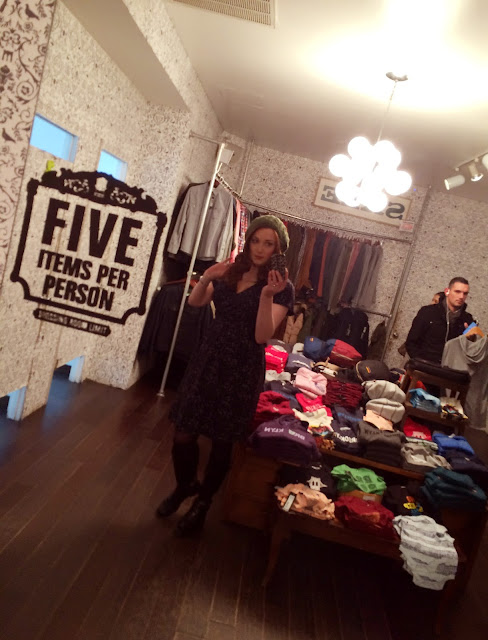 There was one dress that I did like, just a little. Not quite enough to buy it though. Mostly I just liked it because it had an owl pattern and I'm a big fan of owls. Owls are cool. Owls are like flying cats. This dress was basically just a pencil skirt sewed on to a shirt, but it worked. At least enough that I took a few photos to share. 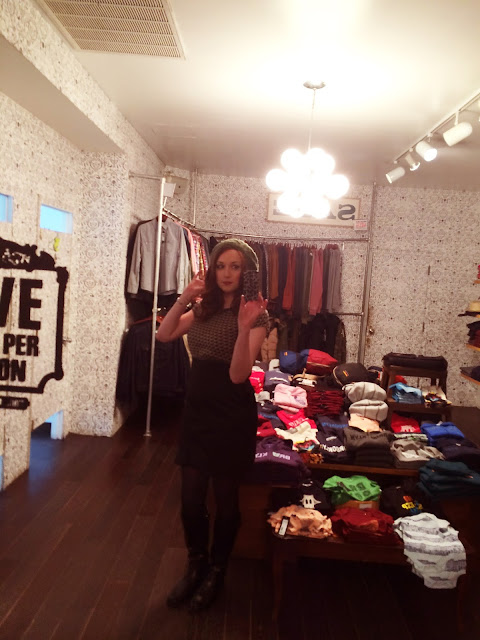 So, I posted this photo up to Facebook with the caption, "Out shopping today in Chelsea. Finding very well made, but very weird looking dresses at Brooklyn Industries." It got a few likes and one of my friends posted a comment:

I love this dress & it's not weird at all! It's very flattering on you & fits perfectly. Hope you bought it! Love the hat as well! You look great! 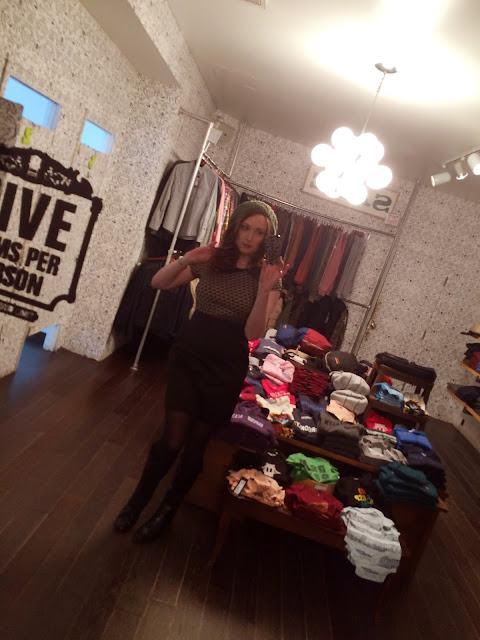 Posted by Faith DaBrooke at 1:23 PM