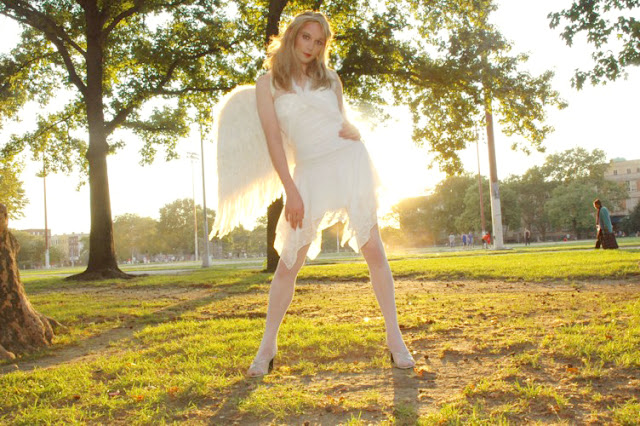 Once upon a time I was an angel. Yes, it's true. And it's hard to believe it was 11 years ago! Seriously, this story began way back in 2005. Back in that year when the world said goodbye to Johnny Carson and Pope John Paul II and said hello to YouTube, Titan and the last of the Star Wars prequels. It wasn't a great year, but it wasn't that bad either, I guess. It was just a regular year. I was living in Queens at the time and still finding myself getting used to this whole New York city thing. On the internet, I was making friends on Myspace and Urnotalone and one day that summer one of those friends reach out to me with an idea.

She was a photographer and wanted me to be her model! But she had a different idea for what look I would show off in her photoshoot.

See back then, I was really enjoy the whole goth/punk/cyber/I-shop-at-Trash-&-Vaudeville look. Maybe it was a popular look at the time or maybe I just tended to gravitate toward other people that shared the look. Personally, I loved it. Fishnets, big boots with lots of buckles, corsets, vinyl dresses and gobs of dark black eyeliner and deep plum lipstick.

So, I went out to the teenage slut stores of Steinway Street in Astoria, Queens and found a white dress that would work perfectly. It was a halter dress, with a billowy white skirt and multiple layers of chiffon-like rayon. To go with it, I found some silvery-white heels with clear plastic straps. Because ethereal beings in heaven totally go for clear plastic. Yes, heaven has strippers. Finally, I stopped by Ricky's to pick up some white fishnets (because I still couldn't quite get past fishnets) and a blonde wig.

On the appointed Saturday, I took a cab or a train to her place in Williamsburg, Brooklyn (I can't quite remember). Though they are only four miles apart, Williamsburg and Astoria are, due to the vagaries of the NYC subway system, an hour and a half from each other by train. So, I didn't venture into Williamsburg too often back then. Honestly, I still don't even though I now live in Brooklyn. I think it's some residual subway-fatigue from back in the day.

As I was still newish to the city and still very new to the concept of going out in public dressed as a girl, I went dressed as a guy and brought clothes to change into. The photographer did my makeup; a rather subtle job. As she sat there giving me a sort of golden hued look, she explained that my makeup had traditionally been quite harsh and high contrast. For my angel look, she wanted to bring out something prettier, gentler and more all-together heavenly. Finally, for the last part of my transformation, she gave me a grand pair of real feather wings. I put them on and became the angel she had once imaged me to be.

To start, we used her large photographic backdrop. This was a roll of grey paper that was maybe fifteen feet wide that was kept on a mount about twelve feet up. Bringing it down, she laid it across the floor to create a dimensionless space for me to inhabit. With a few lights set up, we began the photoshoot. Taking light meter readings ever so often, she snapped away at me as I ran through some poses; first some basic ones then I tried some stupid coquettish ones and a few accidental awkward ones that were inevitable for an inexperienced model like me. 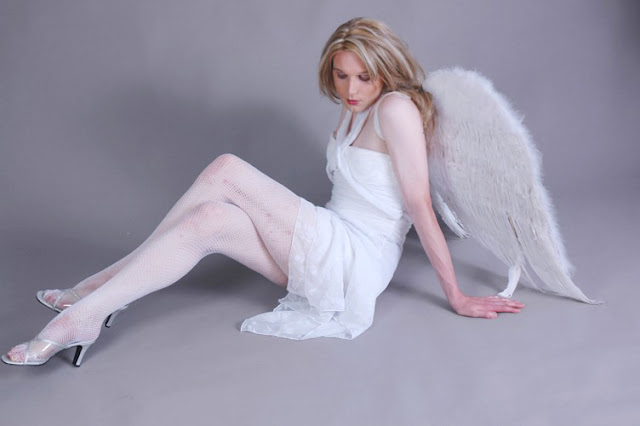 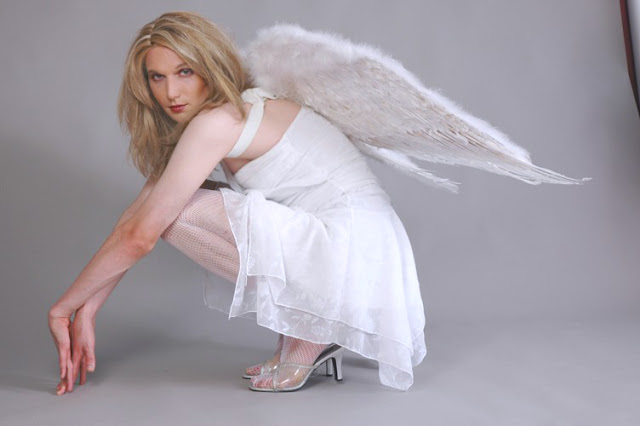 We did a few inside photos on the grey background and then the photographer announced that the wanted to get some outdoor photos. Outdoor photos? Okay. That was crazy talk. Now I had taken outdoor photos before, but here was an adult woman telling me that she was going to take me out in public, dressed an angel, in front of god knows how many and make he stand there while she took photos of me. Okay. I got super nervous at this prospect. Especially when she mentioned the park and that she'd drive us there.


What choice did I really have? Though I was terrified, I was also pretty excited. I got in her car and we drove a little bit to McCarren Park. We got out and I went with her out into the park, walking in public with my little dress and high heels, wig and makeup and fishnets and angel wings. My closest guy clothes were miles away. I was terrified. Oh god yes, I was terrified. 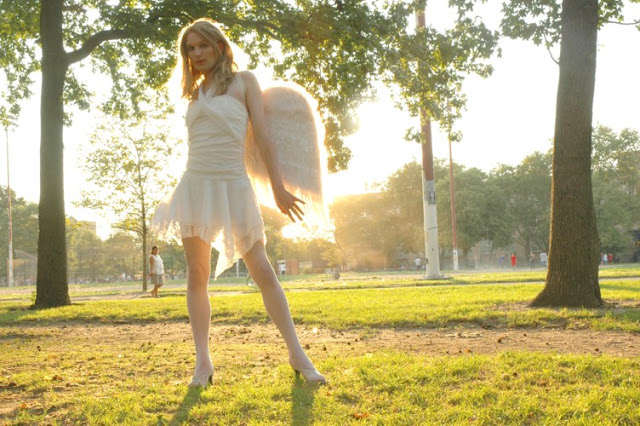 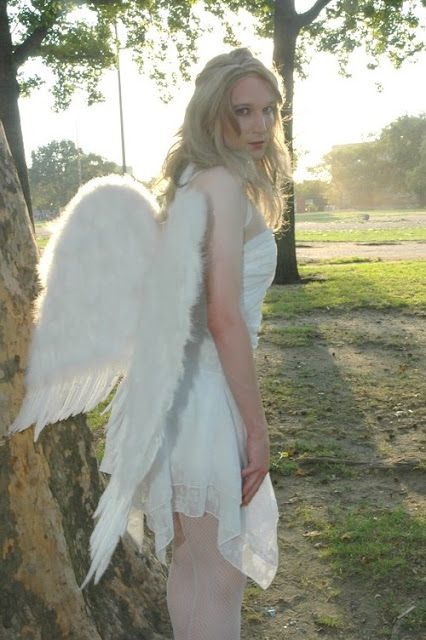 As we began to take more and more shots, I found myself much more relaxed. Sure, people were looking over, but no one was pointing and laughing. It was just another photoshoot in the park. We ended up doing tons of photos, especially as the photographer noticed that the light was getting just right. She had me stand between the camera and the sun to catch that light behind me so I would literally glow. 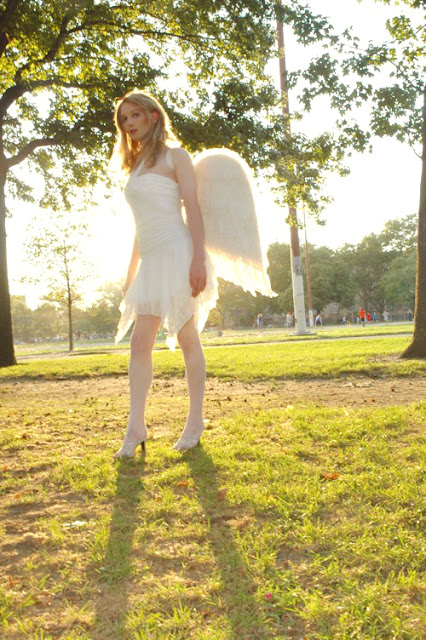 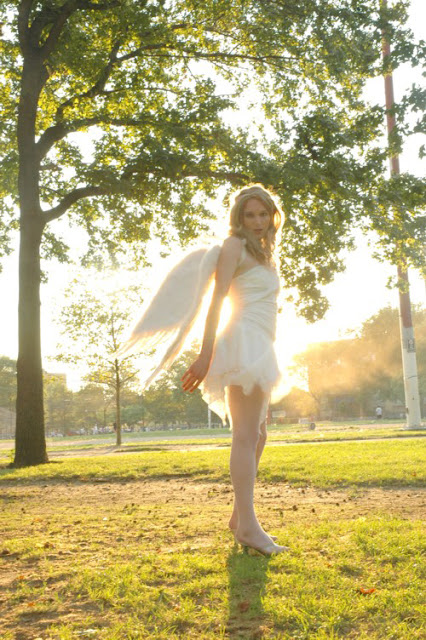 Above is, I think, my favorite shot of the entire photoshoot. Rarely did I ever take profile shots, so it's a kinda unique pose for me. Plus, that is the prefect lighting. It's amazing what a good photographer can do. They can really bring out the best in a person and capture it. 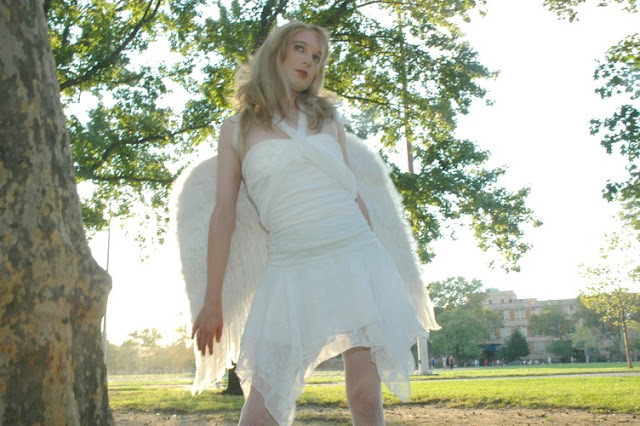 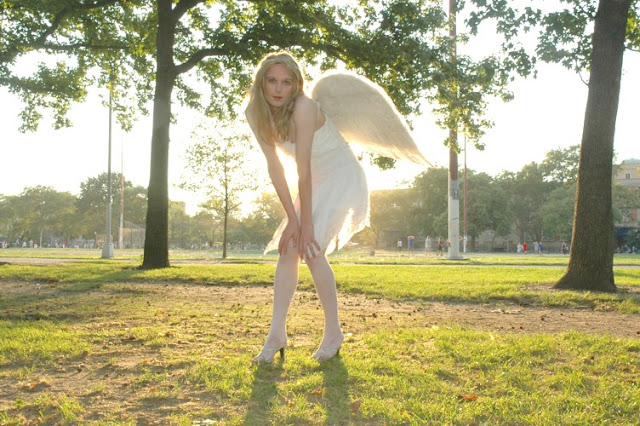 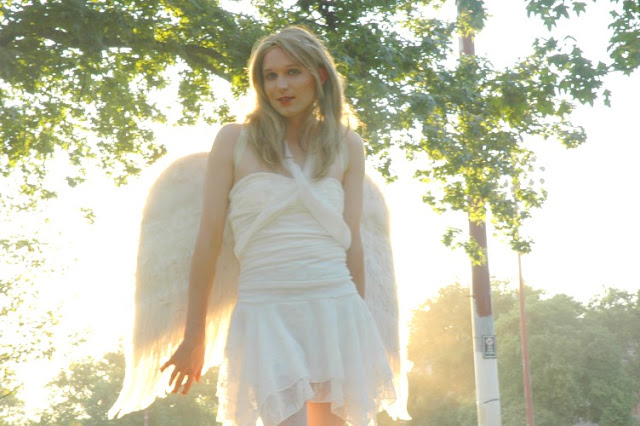 Eventually the sun started to set and so we headed back to her studio. By that time I had forgotten that my only boy clothes were miles away. I was just having such a great time. I would have hopped on the subway in a second and hardly noticed, I was so happy.

Later she sent me a CD of photos, some of which are here and some of which I still haven't even released. Like many of my online friends from back then, we've lost touch, but I'm still so thankful she gave me the opportunity to pose for a real photographer. These photos are something that I really treasure.

It's been a long while since I've had a processional take my pictures, but I'm hoping I can have another real photoshoot sometime in the future. There are Groupons and hey, if you're a professional photographer looking for a model or a muse, just let me know. I'm always happy to have my picture taken. 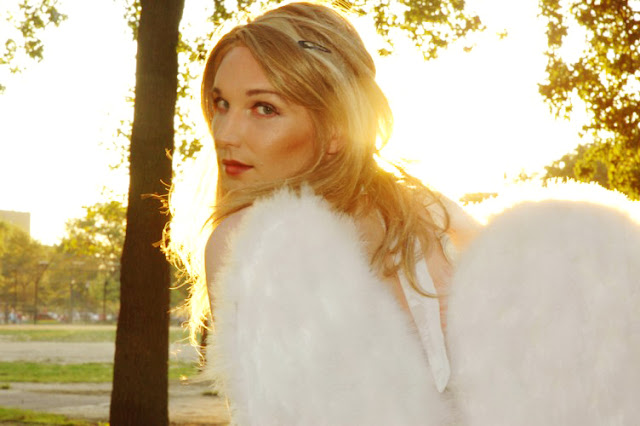 Posted by Faith DaBrooke at 9:10 PM