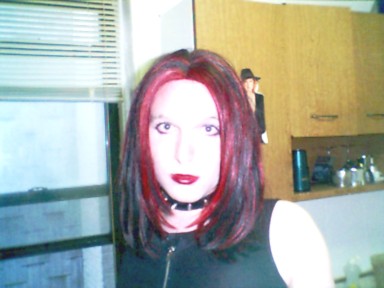 As a geeky person growing up, I was one of the earliest fans of the internet. Way back in the early Nineties I played on MUDs, looked up song lyrics, or just chatted with people on the Compuserve message boards. Later in high school and college I started to explore some of the crossdresser and transgender sites out there. Mostly they were heavy on terrible dick-in-panty photos, pantyhose shots, old cds in pantyhose smoking cigarettes in pantyhose and rather short on good information. But it was still fascinating to learn that there were other people like me. Okay, sort of like me. I've never been into the sexual aspects of dressing and I've never liked pantyhose (I just accept them as a necessity that's required if I want to wear dresses in fall and winter).

As far as I could tell from AOL, Compuserve or the Geocities website, there didn't seem to be any other crossdressers or transgender people in Augusta, GA. I knew a handful of people from the local gay bar, the Colosseum, and there were at least a couple of transgender people on the periphery of my social scene, but in general I was too afraid to ever talk to them, befriend them or heaven forbid, share my own secret with them. Sure, I was out to a few friend as a guy who liked to dress up as a girl sometimes, but I had never actually had a conversation with another person like me. Everyone else was probably just as afraid to come out as I was, so as far as we all knew we were all alone.

Luckily as the 21st Century dawned, things began to change. Firstly, I moved from suburban Georgia (if there's a bright center to America that's the city that its farthest from) to New York City. Secondly, the internet quickly evolved from a fun curiosity to a daily staple of modern life. Vibrant online communities were sprouting like so many digital mushrooms. So with me in a bigger, actually happening, cool town, and with the internet abuzz with life, I was so excited to finally find other people. I looked forward to finding friends to talk to, share feelings with, shop, go out and explore with.

Quickly, I was able to find a lot of friends. Between Myspace and urnotalone.com, I was able to meet all sorts of interesting people. It was amazing time. It seemed like there were so many people out there just like me and we had all been waiting around until we could find connections. There were a plenty of great people, some of whom I still talk to today. I met beautiful, young, infinitely passable trans girls who had started HRT at 15, forty-five year old crossdressers who loved to get groups together for nights out, closeted cds of all ages, cam stars, porn stars fetish models, young transgender women just starting a new life, drag queen wannabees, and people of every comfort and experience level, I was most drawn to the gothy/punk types; gosh, so many of us wore big boots with hundreds of buckles, fishnets, corsets, vinyl skirts& dresses, dredfalls and crazy high-contrast makeup. It was my favorite style of all.

At the time, I was just finding the freedom and courage to go outside as a woman. Back then, my priority was get out, be out, and to have fun with the type of clothes and style I liked. Really, it wasn't about passing for me. Sure, at the time, I would look in the mirror and see a beautiful young woman, but when I went out wearing what  I would wear; boots, fishnets, tiny skirts and hardcore makeup with thick eyeliner and blackish purple lipstick. That'd the sort of thing I'd wear for any occasion, which back then, mostly consisted of trips around the block or maybe a bodega if I were feeling courageous. Courage was something that didn't come all that often in those early days.

Friends came a little more easily. There were many friends I'd talk to by email, or chat with on Yahoo or Myspace. With a good few, we'd swap numbers and talk on the phone from time to time. One the people I spoke to most often was Emery. I really enjoyed talking to her and looked up to her as well. Emmery was about four years older than me and way ahead of me as far as gender changes and living life. Having been on HRT for a year and had already electrolysis done on her face. Tall and thin, with pale skin and shoulder length chestnut hair, Emery lived in Manhattan, in Inwood, and had just started living full time. In one of her emails, she told me how happy she was to finally throw away the last of her boy clothes. On many nights, I'd sit at my computer chatting with Emery, just hearing about her life, hopeful that maybe one day I'd be as together as she was, as ready to start my new life. Maybe one day I'd be as courageous as my friend Emery.

As summer faded into autumn, Emery and I finally made plans to meet in person. Honestly, I can't remember what we made plans to do. Probably drinks or coffee. Something basic. Just as friends (at least I think). It was a Saturday night and we had spent much of the day chatting and I was really looking forward to meeting someone who had changed genders and was also a functioning adult with a job and an apartment and was really living the life.

So I got dressed up in my usual punk outfit; a black tanktop, a super short red school girl skirt complete with pleats and plaid, thick eyeliner, deep plum lipstick, lots of spiky black bracelets and knee high black boots with silver buckles. I grabbed my skull purse and after about a half an hour of psyching myself up (and a couple of drinks for liquid courage), I finally headed out the door.

It wasn't cold that night, but it was windy. I remember because my skirt kept blowing up and I had to sort of hold it down as I walked to the train station. Back then the station was about ten blocks from my house. It was a raised platform (the N/Q at Astoria Blvd.- then the N/W.) which sat a few stories above the Grand Central Parkway, an twelve lane concrete ribbon stretching off to the Triboro Bridge and then to Manhattan and the Bronx beyond. The view from that platform is rather amazing, actually, though over the years I got used to it. I walked every last step, ten blocks, from my apartment to the subway, my black gothic boots pounding the filthy Queens pavement past bodegas, hookah bars and butcher shops. 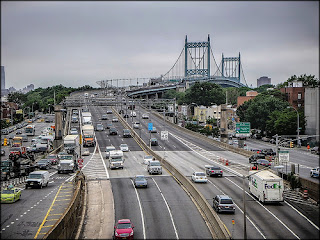 Then standing up there, standing on the platform, I saw the lights of Manhattan glitter in the distance, felt my skirt blowing around, my spike-covered punk bracelets weighing heavy on my wrist, my red Ricky's wig sitting atop my head. And I felt ridiculous. I felt so stupid and ridiculous. I felt like an absolute faker.

Out there, somewhere out in the this gritty city, there were people like Emery, living their lives, struggling through their lives, living every single day as a woman. And here I was in stupid, trashy, bizarre clothes, probably not remotely passing and I felt like the biggest idiot poser of all time. How could I, in my stupid costume, go and meet someone who was really struggling every day, someone who had the real courage to go out every single day?  Someone who dressed sensibly, as a real woman was. Emery was a real woman and I was a stupid crossdresser. How could I show up when I was such a stupid, inexperienced poser?

I turned around and went home. I couldn't face Emery. I IM'd her, apologized, said I wasn't feeling well. Went on with my life. Emery went on with hers. We never did meet. And I regret that. Emery, should she ever read this - I'm sorry. I'm really sorry.

The other day, someone posted a photo of themselves on the train platform in Queens. Another platform, not the exact same one. They didn't show their face in their photo, like many crossdressers who aren't yet comfortable being out. Her post was titled "So comfortable going out now. Wish I had fellow friends" I wrote to her, but she never wrote back. That's okay. Maybe she will one day and hopefully she'll have a little more courage than I did back in the day.

I'm thankful that people who were more advanced than me, or further along in their transition than me, or more comfortable with who they are were there for me. There's some great people in this community. There really are.

Sorry that was maudlin. Here's a picture of a cute puppy to make up for it. 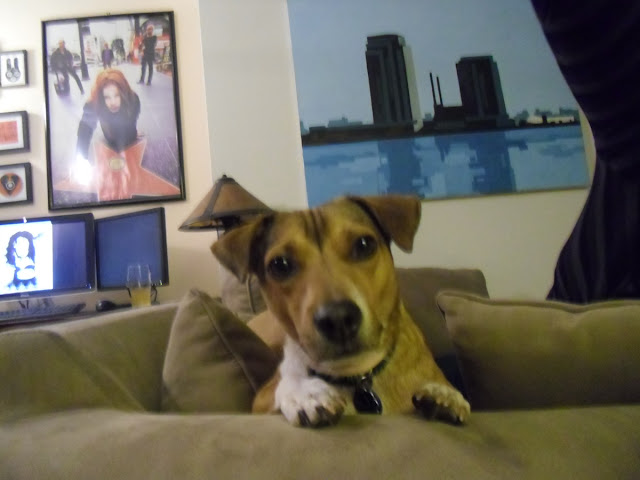 Posted by Faith DaBrooke at 6:48 PM