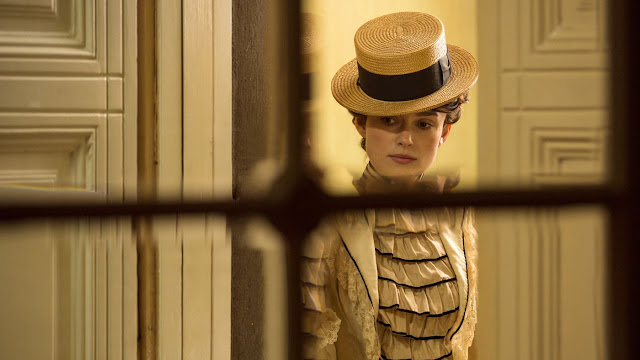 There's a moment in Colette when our protagonist, the toast of fin de siècle Parisian society, returns home to her rural town and the embrace of her mother. Exciting though life in Paris may seem, she lives under the thumb of a controlling and lecherous husband. Colette laments "I must get used to marriage," only to have her mother respond "Better to make marriage get used to you." We follow Colette as she does indeed make marriage, her husband, and Paris get used to her.

Colette tells the story of the Nobel prize nominated French novelist of the same name. She was a young farm girl when she married writer and literary critic Henry Gauthier-Villars, better known by his nom de plume of Willy, who was fourteen years her senior. He takes her to Paris where he introduces her to the salon set; the intellectuals, writers, artists, and performers. Unashamed as she is by her farm girl roots, Colette struggles to fit in and suffers through the boring parties. She quickly discovers that her husband has chosen to ignore their marriage vows, openly flirting with and having affairs with young women. When she confronts him about this, he shrugs her off and tells her that such behavior is expected of men in his station.

Willy's opinion of extramarital affairs is much more traditional when he sees Colette seated with a couple at a party, happily having her palm read by the husband. Hypocritically enraged, Willy demands that Colette leave the party with him. On their ride home he chastises her for flirting with another man. It's then that Colette surprises him. It wasn't the husband that Willy should be jealous of. It was the wife that had caught Colette's eye. Unsurprisingly Willy isn't bothered by the idea of Colette having lesbian affairs. And so Colette finds her first taste of the freedom she has been longing for.

As the perpetually broke Willy is unable to pay more ghost writers, he enlists Colette to begin writing a novel for him. She pens Claudine à l'école, a semi-autobiographical novel about her school days. Due to its honesty and feminine style it begins flying off shelves, becoming especially popular with the young women of Paris. Frustrated as she is forced to watch Willy take credit for her novel's success, Colette begins an affair with the young Southern belle Georgie Raoul-Duval. Ultimately Willy discovers this affair and, in a selfishly sadistic turn, begins his own affair with Georgie. Upon discovering her husband's actions, Colette is enraged and heartbroken. 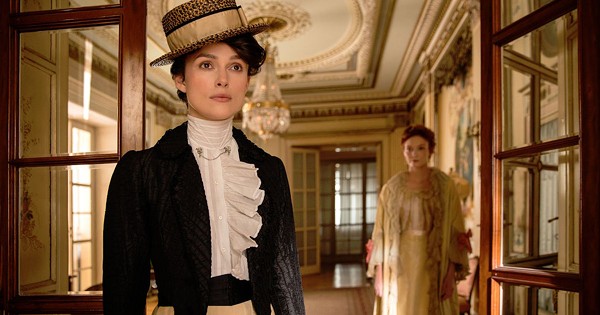 Throughout the film we see Colette's need for personal agency, be it romantic or professional, repeatedly denied by her husband Willy. This is a struggle that LGBTQ+ people often face in their lives. Those who say that they love us, or who have promised to love unconditionally, are often the same ones seeking to control our behaviors and to deny us the freedom to be ourselves.


Colette's own coming out is represented realistically. The path is almost never clear for LGBTQ+ people and we see that Colette's path is winding, hesitant, and exciting. We see how absolutely delighted and satisfied she is to seethingly tell her husband that she is attracted to women. This is perhaps the first time she has ever admitted this to anyone in her life. We see her nervousness as she calls on Georgie for the first time, timidly walking up to the door unsure is she is really going to do this. We see her excitement at finally finding another woman to share herself with. And most importantly we see how her confidence grows as she begins to really find herself.

There is one other important aspect of coming out that the film portrays accurately; the importance of meeting like minded people who can help guide you as you discover your true self.  Colette find this in Mathilde de Morny who his better known by her nickname Missy. An artist and aristocrat, Missy flouts convention by dressing in masculine garb and being an open lesbian.

Colette is immediately drawn to Missy and the two begin a serious romance. One afternoon at Colette's country house, Missy opens up to her about her gender dysphoria. She explains how one day as a child she tried on her brother's school uniform and felt right for the first time in her life. This a moment that many transgender people go through as they discover themselves. The film portrays Missy as a real, complex character who is capable of loving and being loved. It's a wonderful portrait of a transgender person.

Later Colette even corrects Willy when he refers to Missy with female pronouns. Colette insists that Willy use he/him and gender Missy correctly. In the film this presented within the greater context of Colette's rebellion against Willy's manipulative and controlling nature. But it was wonderful to see a film stress the importance of correctly gendering trans people. Willy also states that in the world everything is either feminine or masculine (perhaps using the French language as a basis). So if that is the case what to make of Willy?

Despite Willy's insistence, Colette rejects the idea that everything must be either masculine or feminine. Like Missy, she begins to crossdress, wickedly flaunting a man's suit while Willy rolls his eyes. Colette even goes out on the town while wearing the suit, risking arrest for crossdressing. We see her beginning to find the power that comes with blurring gender lines and taking control her own presentation. She'll now longer acquiesce to being Willy's little farm girl or school girl.

Throughout the film, Colette journey to discover and accept her true self sexually and gender-wise is fully intertwined with her own rebellion against her husband's authority over her. Colette finds herself suffocated by the legal situation she's in. As a woman she has no rights; over her work, over her household, over her finances, over where she goes and who she sees. She has to depend on her spendthrift gambler of a husband for financial support, even as he makes all his money off her writing and refuses to give her credit. As she begins to accept herself as a queer woman she becomes more confident, bold, and rebellious.

In a satisfying turn of events, Colette finds the strength to divorce Willy and leave him for good. She and Missy go on tour with a dramatic performance of their own creation. The play is openly queer, so much so that it causes a riot on its opening night (caused by some agitators who came specifically to cause trouble).  Queerness and agency go hand in hand in Colette. Ultimately her story is one of finding her true self, a journey which also gives her the courage to break free of her controlling husband. In the end Colette owns her work, her presentation, her gender, and her sexuality.

It should be stated though that the film looks only at the rich and upper class of Parisian society. While there are maids or clerks in the background, we don't learn their stories or follow their journeys. The characters we meet are all members of the upper class. While the salon society of fin de siècle Paris was more or less accepting of queer people, entry to this society was provided only to the upper classes, and the wealthy. They accepted queerness only within certain class limits. We see Missy, a transgender woman as well, and male characters who are coded gay (although it's not explicitly stated). But these characters are all wealthy and white. Missy's unconventional gender presentation is only accepted because they are titled and descended from royalty. Colette, the child of rural farmers, is only able to be openly queer by marrying into this society.

Colette is an exquisitely shot film chock full with beautiful scenery, elegant costumes, and fantastic performances. I personally love the idea fin de siècle society; all salons and creative people at parties with a simmering queer undertone. Like Weimar Berlin in the 1920s, I think that I am naturally drawn to periods of time and places where people were creative and queerness was open and accepted.

While I think that Colette presents a realistic portrait of queerness and coming out, I am unsure of exactly how realistically it did present the the actual people's lives, unfamiliar as I am with the real people the film is based on. I sympathized with Colette. There were times when I found myself infuriated by Willy. I wish there we saw more of Missy as that would have been a really interesting character to explore.

Still, I enjoyed the movie and its depiction of LGBTQ+ characters. I loved that the film portrays not a strict "queer" role but rather that messy smear of a rainbow that LGBTQ+ people often exist in. Is Missy a transgender man? Gender queer? Non-binary? It's left somewhat open and it is the same with Colette's queerness. Often as LGBTQ+ people find themselves they try on various roles or blend the roles as needed to find their own place. And the film shows that coming out is, ultimately, about agency.

My only real issue with the movie (and it's a tiny one) is that it almost felt like a little bit like superhero origin story. We follow a young and naive farm girl as she discovers her queerness and agency. I wish we would have spent more time on the older, more confident, more daring Colette. Because she was amazing. Here's hoping for the sequel.

Posted by Faith DaBrooke at 7:22 AM