So I Went to the Philadelphia Transgender Wellness Conference

Recently I attended the Philadelphia Trans Wellness Conference for the first time. And spoiler alert but I had an absolutely fantastic time. It was truly a wonderful time and I can't wait to go back. 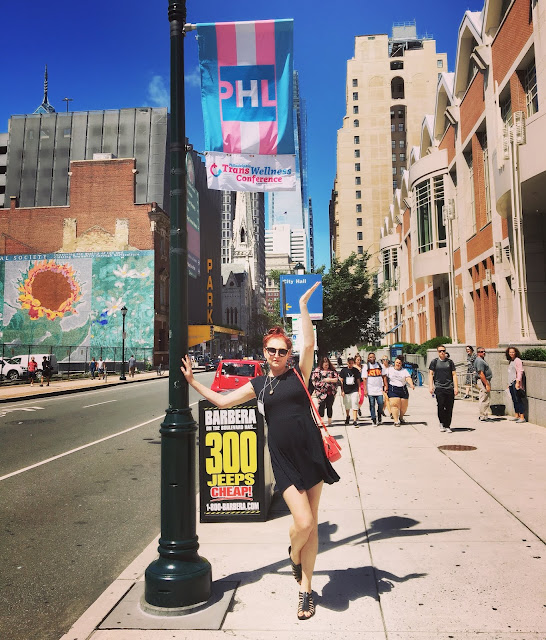 When I had first heard of the conference I was a bit apprehensive. My history with transgender groups and people has often been one of denial and self-segregation. That might sound weird, but I think I tended to shy away from other transgender women except online. Online I could develop friendships but actually hanging out with other trans people? That made things feel too real for me. Better to keep things at a healthy distance right?

Well, when I finally did end up finding a local transgender women's group, I went and found that I didn't really feel like I fit in. Most of the people were much younger than me. Many were still in college. So the group felt permeated by some aggressive far left thought and dominated by a handful of strong personality individuals. It was a safe space, but I didn't feel that comfortable. It wasn't quite my scene. 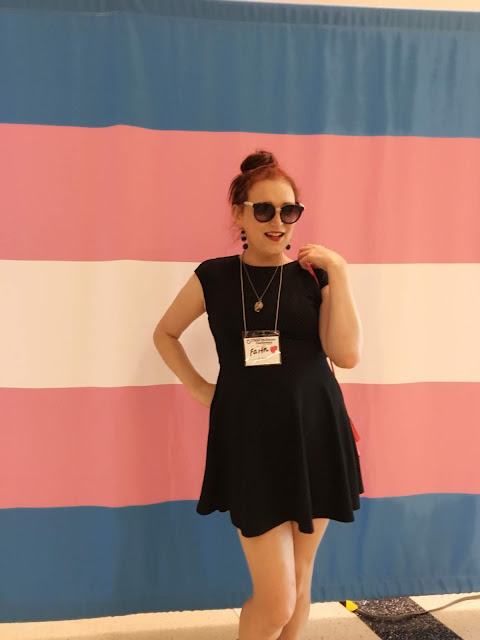 Politically I'm pretty fair left (at least farther left than most) and consider myself a progressive or even a democratic socialist. And yet, I occasionally find myself annoyed by the far left. So, when I thought about travelling to Philadelphia for a transgender wellness conference I wasn't super excited. In my mind I pictured a large group of people walking on eggshells, afraid to speak for fear of being jumped upon but a tiny minority of loud spoken holier than thou trans activists.

Another reason that I felt a little apprehensive is that I'm usually the only the only transgender person in the room. It kinda makes me special. Around my friends being transgender is my thing! Being at a conference full of other transgender people? Suddenly I'm no longer special. I'm ordinary. 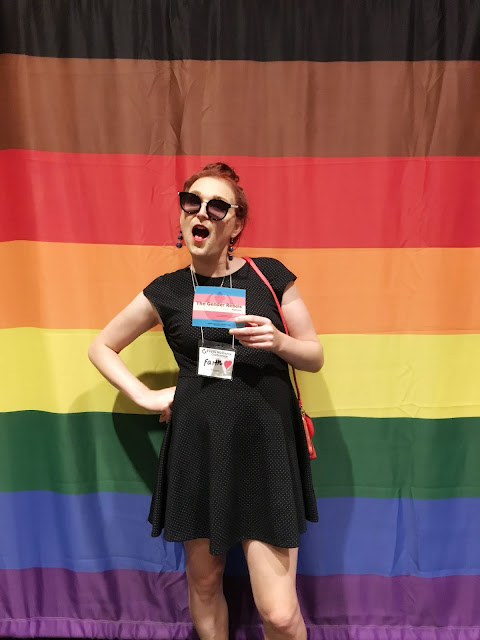 I was totally wrong to be apprehensive. In fact, the conference was welcoming and accepting. There were no loud mouth activists trying to assert holier-than-thou dominance. Everyone was relaxed, cool, and having a great time. From the moment we walked in to the moment we left I felt amazing. I didn't feel like a freak, didn't feel like an outsider. I felt welcomed and accepted and it was awesome. There was such an upbeat positivity to the whole event. The organizers really did a fantastic job.

Each day there were tons of different classroom sessions all all different aspects of transgender life; everything from surgery to insurance to religion, voice, criminal justice, political activism, and more. Kath and I did a whole episode about the conference so I won't go into detail on each particular session suffice to say that they were (for the most part) highly interesting and informative. 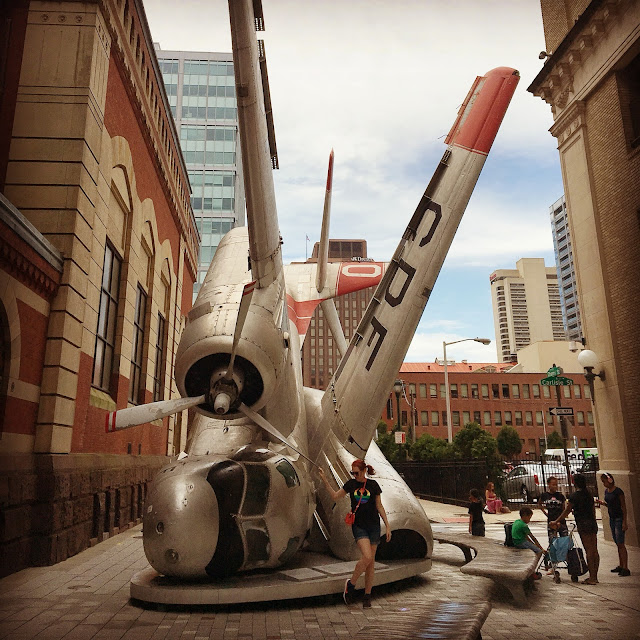 In general these were fun and informative. Once I heard our first speaker (in the silicone injection talk) swear and joke around I knew we wouldn't be walking on eggshells. The Gender Minorities in the Bible was super fun for me, even as an atheist. Until we were talking about queerness in the Bible, I hadn't realized how I kind of missed good discussions on the Bible. The voice talks were quite helpful and gave me some good tips and tricks, including on how to cough in a feminine manner. The humor was great but the witchcraft one was a bust as was the non-theistic perspectives talk. But the Biological Studies was fantastic. It was about the science behind gender dysphoria and it was a standing room only crowd. Spoiler alert - there's lots of science but nothing conclusive. And getting FFS covered by insurance was a great boon as I had never even realized it was possible!

Plus Kath and I got recognized about ten or twelve times. So my fears of being ordinary in a room full of other transgender people turned out to be false! It really does make one feel pretty special to be recognized. Of course we weren't anywhere near as famous as some attendees. One YouTube channel was there and had a long line of people waiting to meet them. So I can feel special but without it going to my head too much. 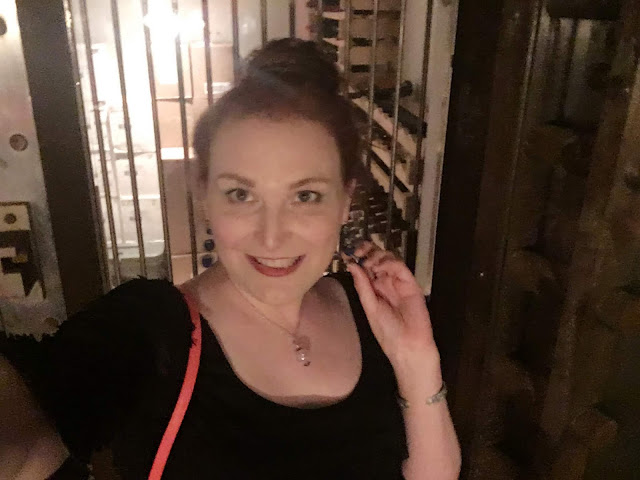 Beyond the talks, there were social events scheduled each evening. Kath and I tend to be introverted, but thankfully some cool people introduced themselves and we had a blast making new friends. The first event on Thursday night was a party (with open bar) at a nearby museum. I'd always wanted to attend a party at a museum. Kath and I even dressed up. Though sadly, no super villains showed up to steal the museum's prized collection of jewels. You can't have everything right?

There was another party on Friday night. At this point I should say that the convention center doesn't seem to be in the best part of Philadelphia. There were a lot of homeless people around. And our hotel, which we picked for its close proximity to the convention center, was next door to a half-way house. There was a long underpass (maybe a hundred yards long) between our hotel and the convention center. As Kath didn't want to attend Friday's party due to tiredness, I decided to go by myself. That meant walking a hundred yards by myself through a poorly lit underpass past about twenty homeless people. I did not feel safe. Thankfully I wasn't harassed or anything and there were other convention attendees also walking along so it wasn't that unsafe. But I didn't quite feel safe. That party turned out to be more of a drag show than a real party. As I don't personally care for drag I didn't stick around for too long. 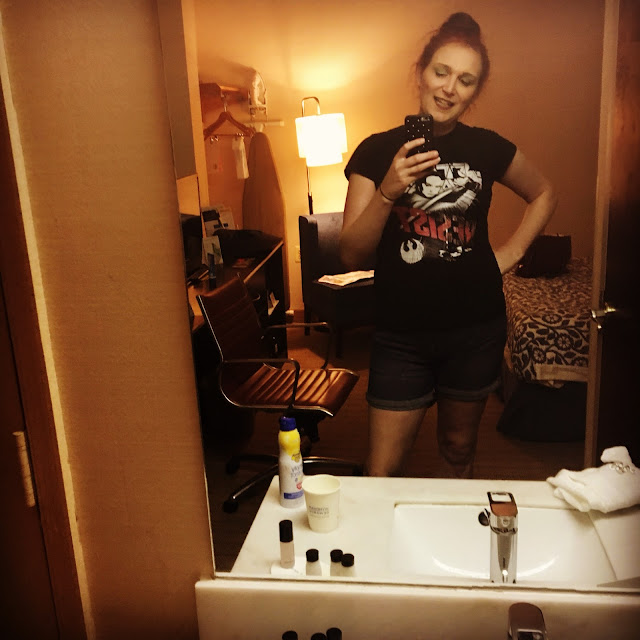 Now, as I had never been to Philly, we had to try out the local delicacies (I apologize right now for the food pictures in this post. Delicious though they are, these are not photogenic foodstuffs). The convention center was across the street from the Reading Terminal Market, which is a gigantic open area with various shops and restaurants. Apparently it features some of Philly's most famous foodstuffs (or at least the ones that tourists love because they were on Food Network).

We had the famous roast pork and broccoli rabe sandwich that people told us about, but it was mostly just bland. Kath didn't even finish it and gave the other half of it to a homeless person. There were a lot of Amish stalls including one that did amazing barbeque and another that made equally amazing (and equally greasy) breakfast sandwiches. We finally got to try pork roll/Taylor ham, which is apparently a New Jersey specialty food. It's basically saltier, fancier baloney. 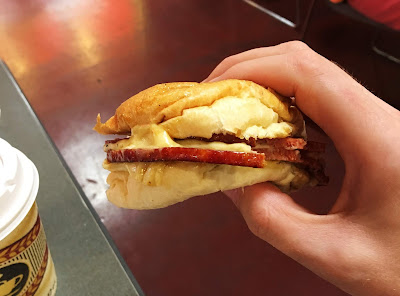 We also had to make sure we tried Philadelphia's most important culinary export; the cheesesteak. For this we walked to Pat's, which is apparently one of the two most famous cheesesteak places in Philly. The other is racist, so we didn't go there. 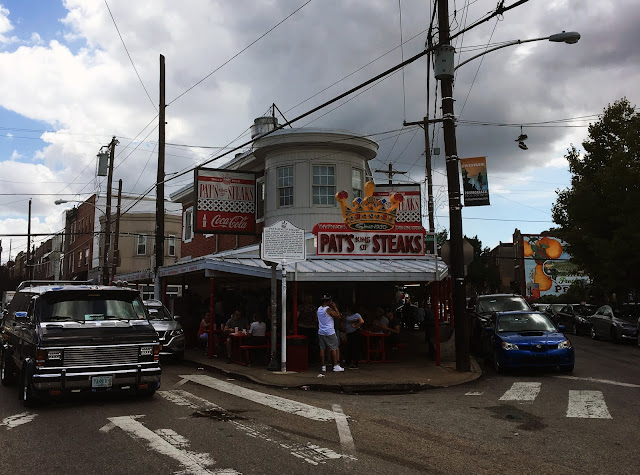 And we discovered that the cheesesteak is best when covered with Cheeze Whiz and grilled onions is the best option. Who wouldn've thunk that Cheeze Whiz would be good? We were seriously surprised and ended up eating two more cheesesteaks (at different places) with those same fixins. Tough later we would discover that hot peppers make it even better. 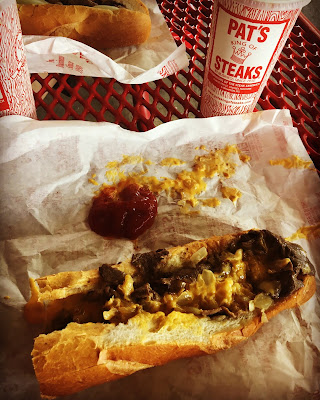 On Sunday, since the conference was over, we decided to go see Eastern State Penitentiary. It's the first penitentiary in the United States. Plus one of my ancestors did time there back in the 1800s for some sort of insurance fraud. 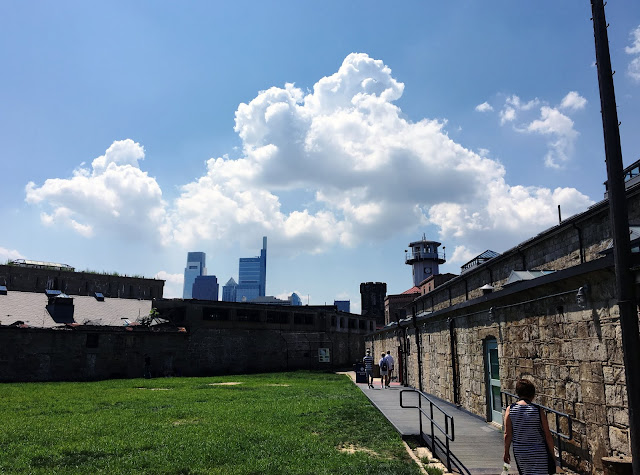 Yes, I got selfies in a place that was known for its human suffering! See, there were no photos allowed at the conference except for certain designated areas. And those areas did not have the best lighting so I ended up with only a handful of photos from conference. And the other spot we visited on this trip, the Mutter Museum, also has a no photos policy. So I  had to get my photos somewhere! 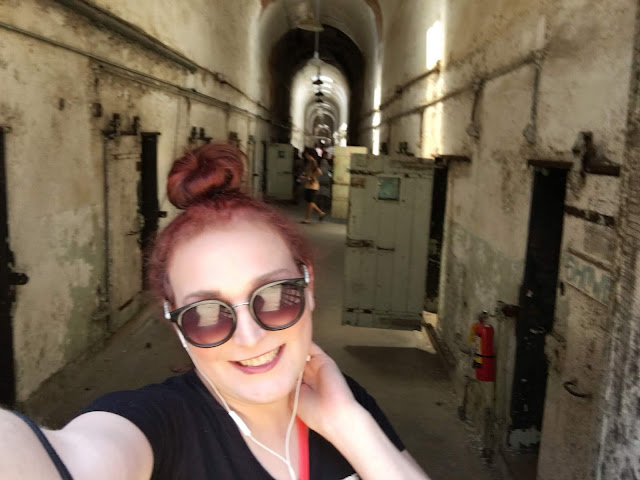 For those who don't know, the Mutter Museum is a large collection of biological oddities and specimens. They have some sections of Einstein's brain, the liver of Cheng and Eng (the original "Siamese" twins), a whole ton of skulls, pickled punks, and other human specimens. It's fascinating but we had planned it for before lunch and it kinda killed our appetite for food. 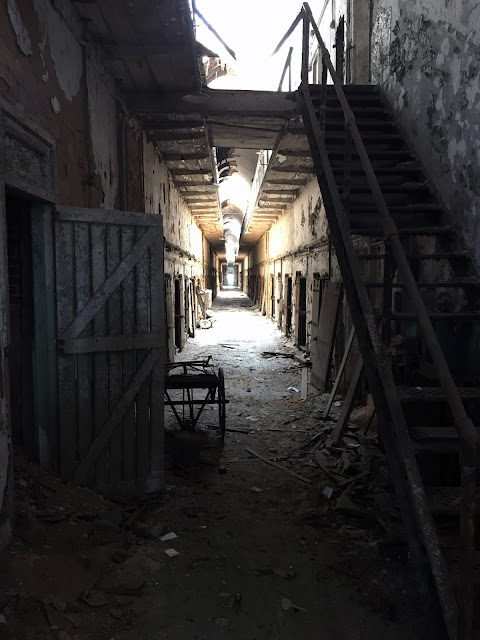 Eastern State was fascinating however and they made sure that the entire tour was quite education. Though there were also plenty of nice and spooky still abandoned parts of the prison. 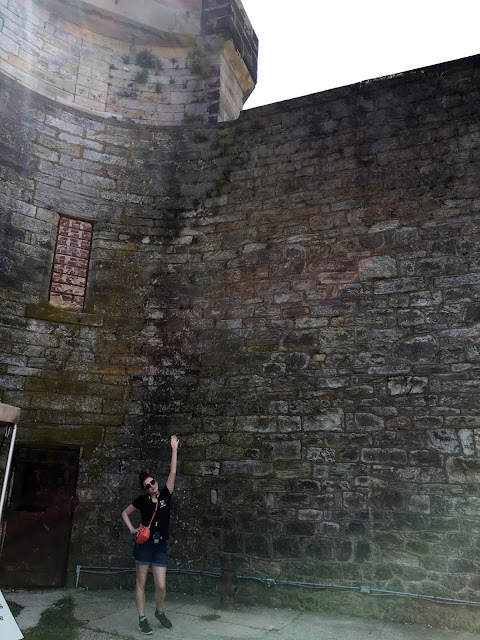 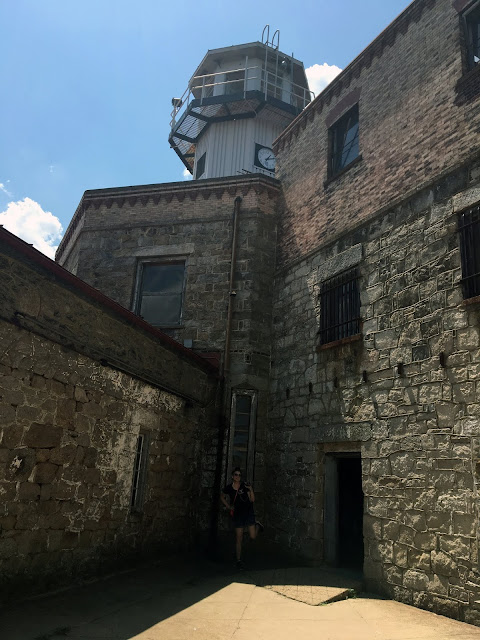 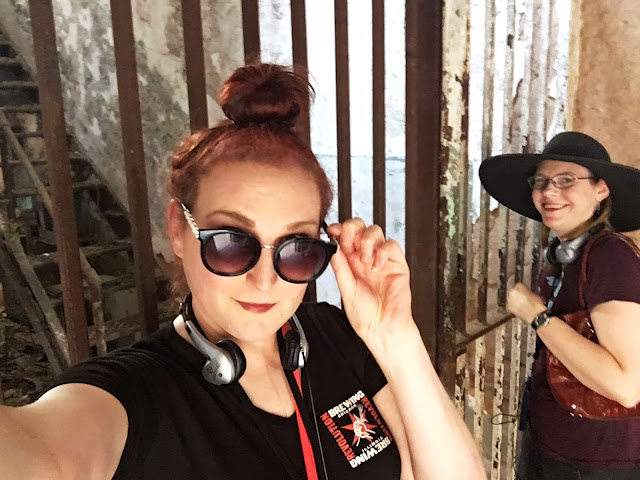 On the whole we had a lot of fun in Philadelphia. The conference was the really fun part though. Fun though Mutter and cheesesteaks and prisons are, it was amazing to find myself in a friendly and supportive environment where I could learn so much about transgender issues and topics. It was fascinating and I learned so much and had so much fun!


It's funny but when we got back home, I literally felt a little bit deflated. Like I was on such a high being able to just fit in with people like me. When we got home it was kind of a let down. I wanted that high to continue! I wanted to see more and talk to more people and learn and share so much more. 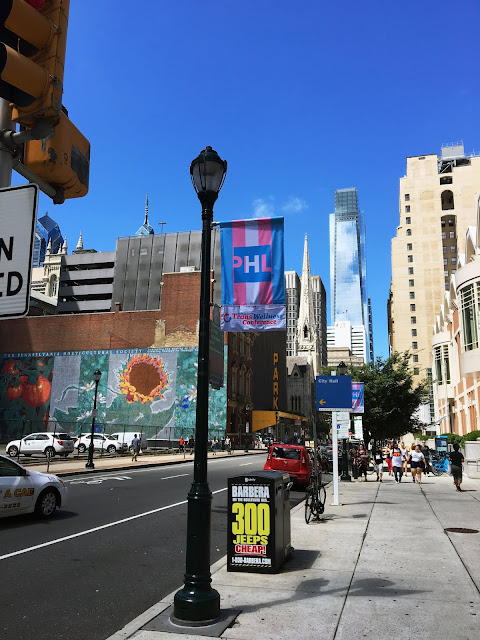 We'll have to come back next year! And hopefully have a table in the vendor section. If you see us stop by and say hi.
Posted by Faith DaBrooke at 8:24 AM