Curb Stomped in My Soul 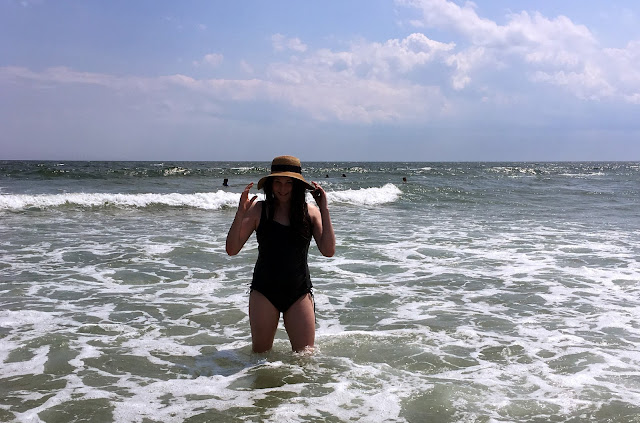 As summer of 2017 approached, I greeted it with wild optimism. And not without reason. Not only had my drinking been tamed, I had started going to the gym and my hair was so long that it was starting to brush my shoulders. I finally finished editing my new book and submitted it to some LGBT publishers. My weight was down and my hopes were up. June went so well with Chicago and coming out to my in-laws. Then July came and it sucker punched me hard, destroyed my optimism and left me feeling awful, depressed and curb stomped in my soul.

This is basically my own fault for setting my expectations too high. It started with a bikini. I've been losing a lot of weight. I'm down like 20lbs from my peak weight a couple years ago. That's been making me feel good. Right now I'm at my 1.75 years on HRT and the effects are starting to show more and more. So I went and bought a bikini. It was black, stringy, and cute. I was skinnier, curvier and I wanted to rock a bikini. I felt like I was ready. 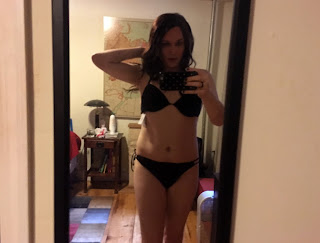 I actually took Monday off work so that Kath and I could hit the beach on a non-busy day. Previously, Kath had been on a weekday and reported back that the beach was nearly deserted. Deserted was good. That meant that I could go in a bikini and not feel too self-conscious that I wasn't, like, Bond Girl levels of hot. I was super excited. I was gonna be a real girl in a bikini on the beach! No more of this tankini cheating like last time.

I showed off my new bikini for Kath to gauge her opinion. Excited though I was, I wasn't 100% sure that I could really pull it off. This began a long period of vacillation. Could I really pull off the bikini? Would it be better to save it for when I lost a few more pounds? I still have, for lack of a better word, a little bit of a gut. Not a huge one, mind you, but a little bit.

Ultimately, I decided that I wasn't quite there yet. I wasn't going to be a beach babe. Not yet. So I went with the safe option even though it really bugged me to do that. So now my life has become like a Cathy cartoon. Bathing suits have become a source of stress and my own body issues are leaving me seriously depressed. After every meal I now feel guilty about having eaten. Even though I know I've been doing better, even though I know that I'm better now than I was even three months ago, even though I know that transition is a marathon and not a sprint, I'm still left feeling frustrated, insanely frustrated by how I look. 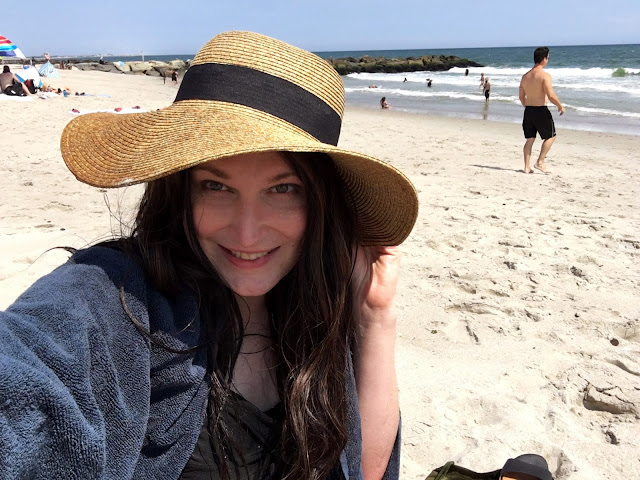 Still, I went to the beach. And I realized, based on a number of people there, that I probably would have been okay if I had gone with the bikini. Ah well. There was one good thing though. This was not the same tankini that I wore the last time at the beach. At least this one was a size smaller. So there's that at least. 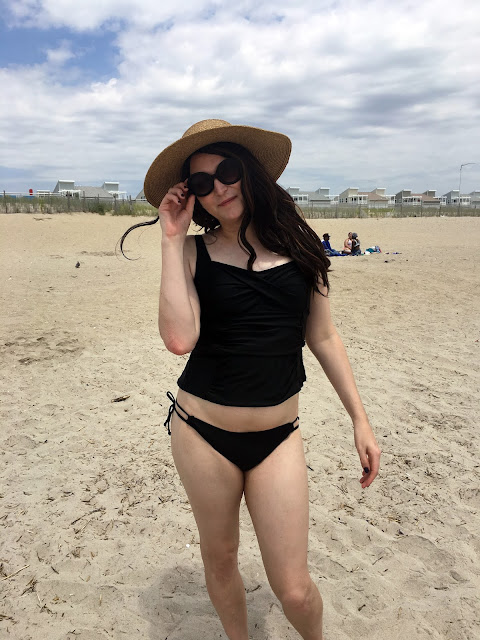 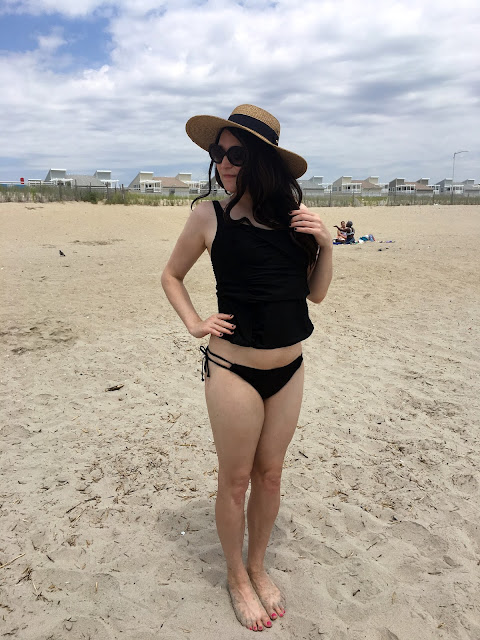 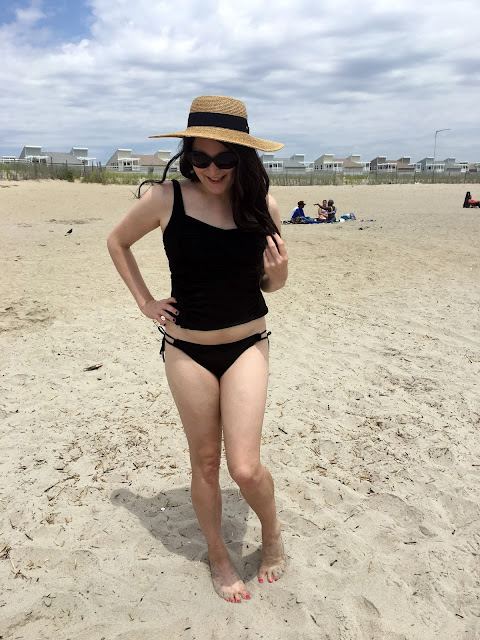 While I did go in the water, because I was wearing a wig, I wasn't able to fully dunk my head under. It was okay. My hair still got wet though. And after the salt water and the insanely strong beach winds (it was so windy I could barely read my book without the pages flapping crazily), my hair was pretty darn wrecked. That's just how it is with wigs. At least with my wigs. They get fucking wrecked. 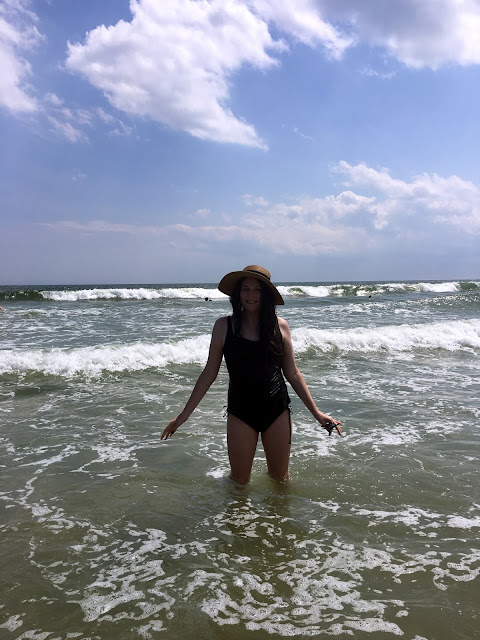 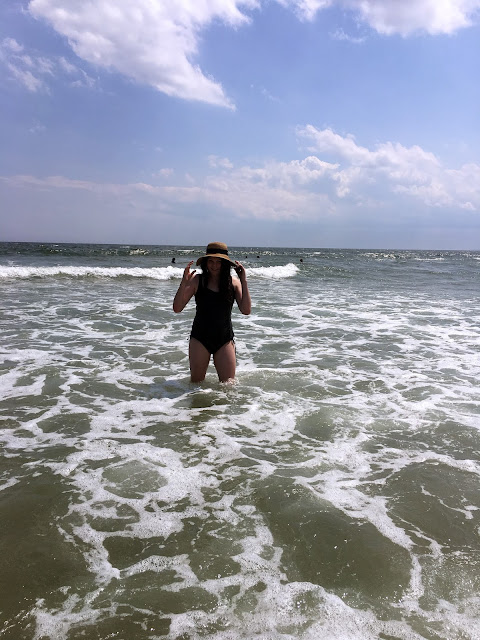 After the beach day, I still had to wear that same wig to work. Sure, I had thought about getting a new one, but I didn't want to. I didn't want to because I had a made a hair salon appointment for Thursday night. The plan was that I would go in Thursday after work and maybe, fingers crossed, be done with wigs forever! 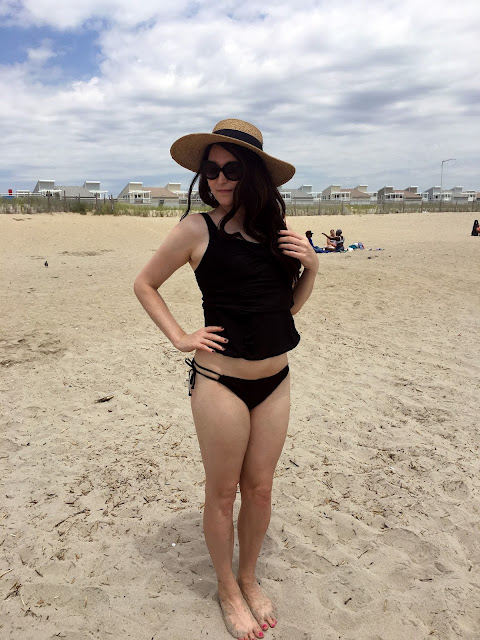 This was my major mistake. Not the haircut, but rather letting myself think that I could be done with wigs forever. My hair is actually getting pretty long. It's almost down to my shoulders. Plus my hair has a really nice natural, wavy curls. My hairline is still an issue. Despite a year and half of finesteride, it hasn't really gotten better. This has been my hugest stumbling block and the thing that has caused me the most stress, frustration and depression during my transition. Other people have normal hairlines. Why does my hairline have to look so fucking awful?

But, I figured that maybe bangs could be my salvation. Maybe with bangs I could hide my hairline and still look cute. There'd be no more wigs. There'd be no more getting read as male when I was in lazy mode. This was going to be the thing that took my transition to the next level, that made it real. Finally I'd be a real person and not someone playing dress up. Bangs. This was the answer.

So many girls with bangs look fantastic. So I went into my hair dresser and presented her with a challenge. Give me some bangs that will hide my hairline and make me look cute. I'd searched the internet for cute, short haircuts with bangs and tried to find ones that sort of matched my hair's natural waviness. I printed out the pictures and gave my hair dresser a vision board. This was what I wanted. Make me look like this and then I could be a real girl. Finally. Please. 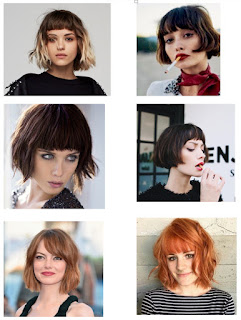 She spent two hours cutting my hair, doing a few styling things, adding various products. I have no doubt that she is a seriously skilled hair stylist. I have no doubt of that. But even the best artist can't work without a good canvas. And apparently, my hair was not the right canvas. When we finished, all the other hair dressers were gushing and saying things like "Oh it looks so good."

It did not look good. I was pissed. It looked horrible. It looked like a 70s bowl cut. But what can you do? I tried to smile and be positive. At least until I'd paid. A hundred bucks, including tip. And I came out looking like this: 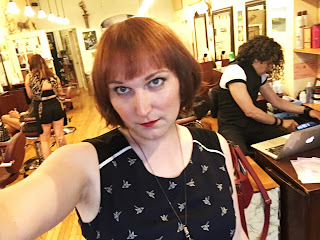 Yes, I look pissed in that picture. Kath had texted to ask how it went. Well, it went badly. I looked terrible. Instead of cute bangs, I just had a bunch of hair brushed forward because that was the only way to hide my awful, awful, awful, hideous hairline. So I looked bad. Terrible. All my hopes were dashed into a million little defeated shards. 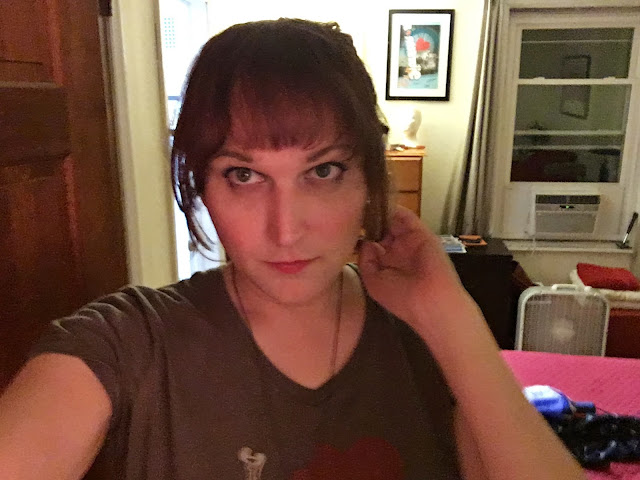 What's worse is that my mom is coming this weekend. She's staying with us. This is the first time she's meeting Faith. Already I've been stressing over this. There's so much to do before hand, so much cleaning, so much self-maintenance (my nails look like crap too). It's been a serious source of stress. The past couple weeks I've been preoccupied, busy and on edge. And now this. 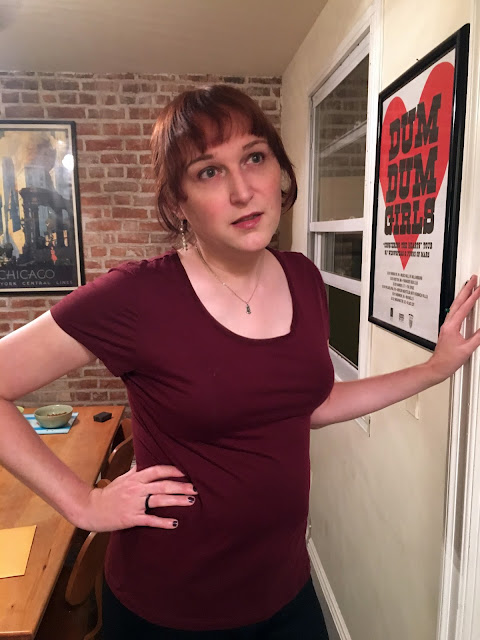 This morning I woke up, got ready, and tried to play with my hair, tried to do something, anything to make it look okay. Maybe I could look decent enough to show up at work with my real hair instead of a wig. The last thing I wanted to do was throw on a wig and go back into that prison. But it was no luck. I ended up breaking down in tears. I just couldn't handle it.

Already I'm the freak at work. Looking my best is the only way to reduce my freakishness. I realized that there was no choice. I couldn't show up at work, I couldn't meet my mom looking like this. I still want to cry as I write this. Who knew transition would be this hard? So, I'm left realizing that I have to do the wigs again. I have to be fake. I have to deal with wigs getting ratty and nasty. I have to deal with them being hot and uncomfortable. That's my life for the foreseeable future. And the worst part is, this is all my own fault for getting my own hopes up too high.

Guess I'll throw the wig back on for now. Sigh. 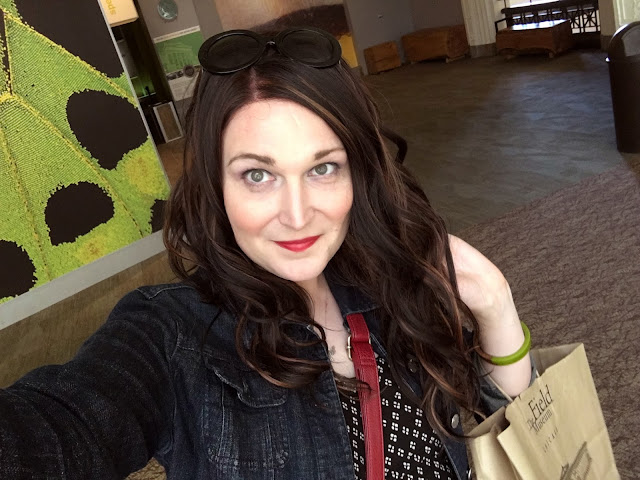 Well, I guess surgery is my only option. I have to fix this hairline. It's destroying me. I don't know how much longer I can take this.
Posted by Faith DaBrooke at 9:13 AM