It's Monday morning and I was late for work today. Partly it's because I hit snooze one time too many and slept a half hour later than I should have. But mostly it's because I had to take a good amount of time this morning to finish washing off my makeup from last night and had to clean off my weekend nail polish too before coming to work. I am not yet out at work. This means I am not yet out full time and living in what could be described as a duel-gender space.

In part this is because my hairline is still suffering from male-pattered baldness. It's not bad, nowhere near as bad as I once thought, but definitely noticeable. For the past twelve years I'd kept my head shaved, precisely to avoid looking bald, but it's actually not bad at all. At least for a guy. For a girl it doesn't work. Still I'm taking finesteride/propecia and I think it's been helping. Hopefully I can avoid $8,000 worth of hair plugs. Hopefully, because I can't friggin' afford that!

And my other hair is growing out, Almost to the point that I can pull off a Twiggy look like this. Almost. 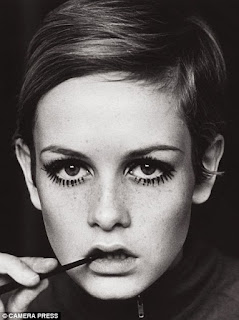 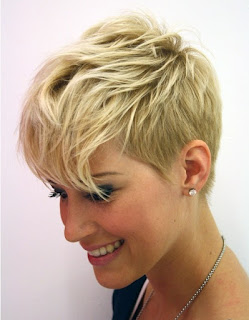 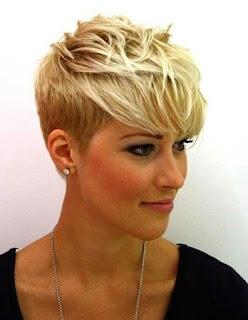 The other thing keeping me from living full time is the need to come out to more people. I'm out to all the easy ones now and so all I have left are the hard ones. You know, people like my coworkers and family. And my in-laws.

My in-laws are particularly tricky because I'm much closer to them than I am with my blood family. And it's double-tricky because I'm also sort of outing their kid as dating a transgender person. That's a lot to handle. I am, needless to say, rather frustrated by everything. And I'm especially frustrated by my own lack of courage.

It was actually my own lack of courage that screwed me out of something that I was really looking forward to. I was looking forward to being Faith at my friend's wedding. It's difficult for me to relay how excited I was. I would get to be me at an important social occasion with many of my good friends in attendance. It would feel so validating to be there at that important moment as a girl, accepted by friends and celebrating together.  It was a June wedding but I think I had my dress picked out even before the bride did.

I'd even planned on taking a few days off work so I could get a mani-pedi and spend the extended weekend in girl-mode. There was the wedding, an after-party, and a brunch the next day. The bride had even invited me to her pre-wedding preparation when she would get her hair and makeup expertly done. We were going to have champagne and be girly. It was going to be an awesome, fantastic weekend.

Unfortunately it was not to be. A few of the invited guests RSVP'd "no," and so the bride dipped into her B-listers. That meant that my that suddenly my in-laws were on the guest list. And of course they RSVPd "yes." Of course they did. Why not, right?

So now, instead of being able to spend a wonderful weekend as Faith, celebrating with friends, taking part in all the traditionally female parts of a wedding, I would be going as a boring old stupid guy. In pants and a nicely pressed shirt and a tie. Yeah, that's right. Instead of a beautiful dress for a summer day, I'd be wearing my friggin' work clothes. My office outfit. Ugh. Stupid boy life.

Well, one the day, I wore my stupid boy clothes, I did my best to be happy and enjoy myself. I saw old friends, celebrated two of my friends' union and enjoyed some food and drinks too. Evnen

But, this story has a happy ending! It turns out that my in-laws were all tuckered out and decided to head back to their hotel rather than attend the after-party! My foot started tapping and I tried to will their Uber to show up as quickly as it could. After an intermittently long time where they insisted on saying goodbye to every single person in attendance, they finally got in their car and headed out. I was free!

So like the superhero I am, I rushed home and got into my girl clothes as quickly as I could, put on my makeup faster than The Flash on meth and headed out to the after party!

It was great. I was able to come out to some new people (a few friends from out of town and things) and actually got to be me for at least part of my friends' special day. It made me super happy. Insanely happy. I was the happiest girl in North Happyton.


So there's my predicament. By not having the courage to come out to many of the people in my life I'm missing out on a lot of great experiences. I'm missing out on my life. The other day I almost cried while looking at dresses on Banana Republic's website. Why aren't I wearing all these wonderful dresses to work? Why isn't this me? I guess they call that dysphoria. It's been getting harder. I'm 8 months on HRT and I don't feel like I've ever been farther from actually being a woman. It's almost getting too hard, to the point where I don't know if I can bear another day as a guy.

Step one is coming out to my sister. Yesterday I bought some nice paper and nice envelopes. I started drafting a letter to her and maybe I'll mail it this weekend. She's already one of my 108 Facebook friends, so she obviously knows.

And from there, I guess...we'll see how it goes. If you have any extra courage, please use your mental telepathy to broadcast it my way. Or maybe invent a courage transference pulse emitter and do it that way, you know, if you don't have any mental powers. Whatever works. I just know I need some more courage to get me through this.
Posted by Faith DaBrooke at 10:00 AM