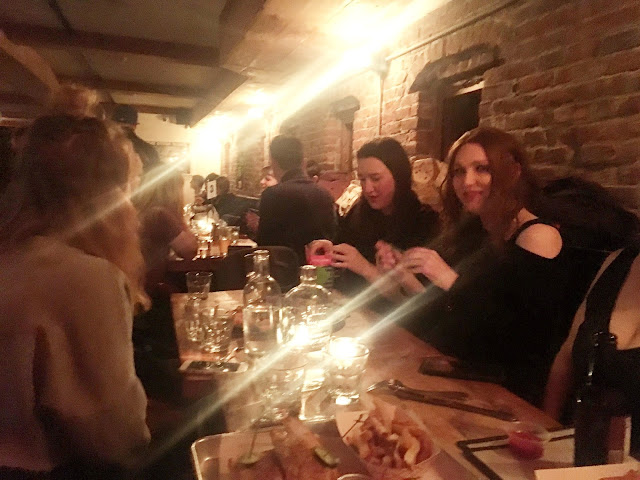 Okay, the above is not a great picture, but it represents something superbly important; a dream come true for me. This picture was taken Saturday. I went out with a good group of friends to a restaurant here in Brooklyn. We had food, a gummi candy platter (instead of cake), and a healthy amount of drinks. That sounds like a great birthday, but why is it a dream come true? Well, let's take a trip back to the wild and wily days of 2006.

Back then, I was still mostly in the closet. I officially identified as a crossdresser, though I was beginning to change that to "genderflux," which I think today would be called bigender or gender queer. Most of my friends didn't know. My family and coworkers definitely didn't know. I still wasn't quite willing to admit that I was transgender, even though I spent most of my time online researching transgender topics .

See, I had an active life online. Not only did I have my own website (yes, the url was the same as it is today), but I also had a burgeoning YouTube channel and I had a fairly lively Myspace Page.
For those of you who are too young to remember, or missed the great Myspace days, Myspace was quite different from Facebook, almost the opposite. Myspace was a place to meet people and make new friends. It was totally normal, and even a compliment, to send someone, even a complete stranger, a friend request. If you do that on Facebook people think you're a serial killer or something. But on Myspace it was cool. I had a boy and girl Myspace pages, and plenty of friends from around the world. Many of these people, I'm still friends with today.

Many of my friends were transgender women. Of course they were. And I would post up all my best photos, and chat with them, and ask them about what hormones were like. But, there was one friend in particular that I remember. It's stuck deep in my brain, because this photo produced in me a deep and abiding longing.

That picture was my transgirl Myspace friend, a cute blonde model type, was seated at a table, out at bar or restaurant, with her head on her hand, elbow on the table, and a little half-smile on her face. What's more she was surrounded by friends. It was such a simple moment captured yet to me it was beautiful beyond words. Though she was transgender, my friend was just another girl out on the town, hanging out with her friends. That was what I longed for.

Twelve years later, I looked at that picture above and felt like my wish had come true. Sure, I have been going out and presenting female for ages. Yes, I've been out with friends a hundred times, but for some reason, when I looked at that photo it filled me with happiness. Something that I had once dreamed of and hoped for, had become a concrete reality.

Transition is slow. It's difficult. It's expensive. It's stressful. But when you see a pic like that and realize how far you've come, it really is worth it.

Here's to all our dreams.
Posted by Faith DaBrooke at 8:38 AM

Email ThisBlogThis!Share to TwitterShare to FacebookShare to Pinterest
Labels: night out