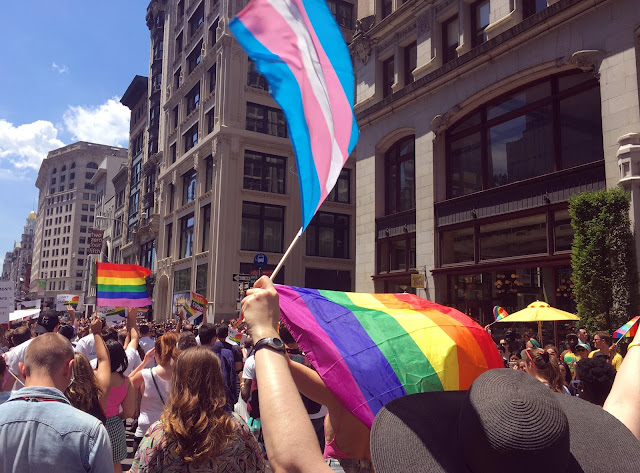 There are only two holidays that I celebrate with any real enthusiasm. Those are Halloween and Pride. Christmas, Thanksgiving, Flag Day, Arbor Day, Martinmas, Talk Like a Pirate Day. They can take a hike. I'm just not into them. Pride is particularly meaningful for me because of my past.

Growing up I hid who I was wasn't always easy. Whether it was homophobic rants from my dad about how all gays were perverts, or "faggot" being the go to insult in junior high and high school, or every preacher who denounced the sin of homosexuality and said that gay people were condemned to hell. Maybe it was the politicians, serious politicians, who called for the death penalty for gay people. Hiding seemed a good strategy, especially considering that I didn't really even know if I was gay.

It's hard growing up LGBT. A lot of us grew up like I did. We knew something wasn't right. We knew we were different. But often we didn't have the vocabulary or the road map to help us understand. There were no instructions. We were alone and we were confused. And we worried that if we talked about it to anyone we would be rejected; unloved, unwanted and maybe even unsafe.

During my own early life I didn't dare ever speak to anyone about what I felt inside. I didn't really even know how to articulate what I was feeling. I knew I was attracted to girls, so that meant I wasn't gay. Yet I wanted nothing in the world but to be a girl. So was I gay? I didn't know. Maybe I was? I was something a lot like gay I guess? Either way every message I heard was how gay people were sinful, evil perverts who deserved death and endless torture in hell. In that situation I didn't dare speak about how the confusion I was feeling.

Recently, I've been binge watching Supergirl on Netflix. Last night I just got to the story arc where one of the main characters comes out as gay. What I really loved about this, what it really did right, was show a character who was confused. So often coming out is pictured as someone who absolutely knows they're gay, but for many of us (me included), coming out is a long, slow process that starts with confusion and then proceeds to only more confusion. I loved this Supergirl story. I was home alone watching it and bawling my eyes out.


But, now I'm out. And Pride is a celebration of being out and accepting who we are. It's important. I spent my whole life being told that I deserved to die simply because of who I am. And now, because of the long and complicated journey I've taken I can go to Pride and celebrate who I am. I can say to the world "this is me and I'm not ashamed and I'm not afraid." And I can do that with my partner at my side. 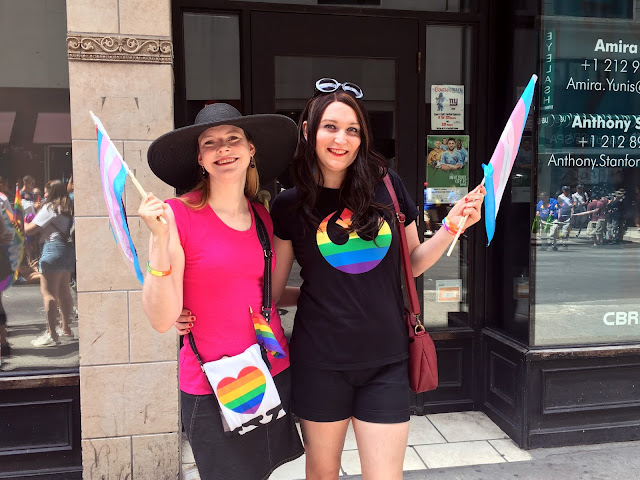 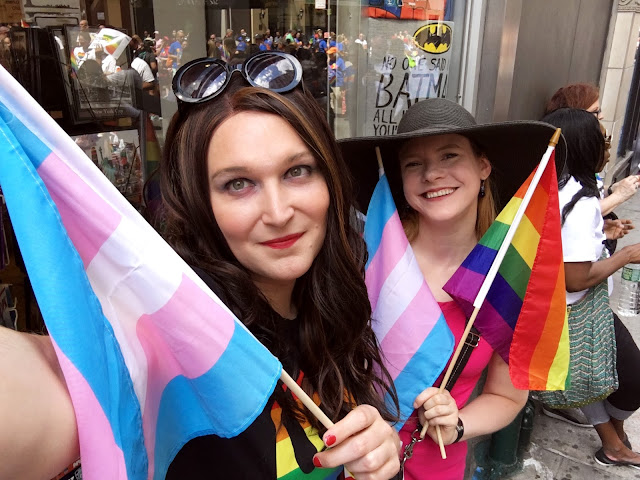 This year again, we marched with the Governor's contingent. We had a backup group though, because we're smart like that. There's something I like about being me while marching with a prominent state leader. It's like I'm really being taken seriously, you know. This is my real identity and it's accepted by the State of New York. It's a good confirmation that makes me feel welcomed. I love that I can live in a place that values who I am and has passed numerous laws protecting my rights. 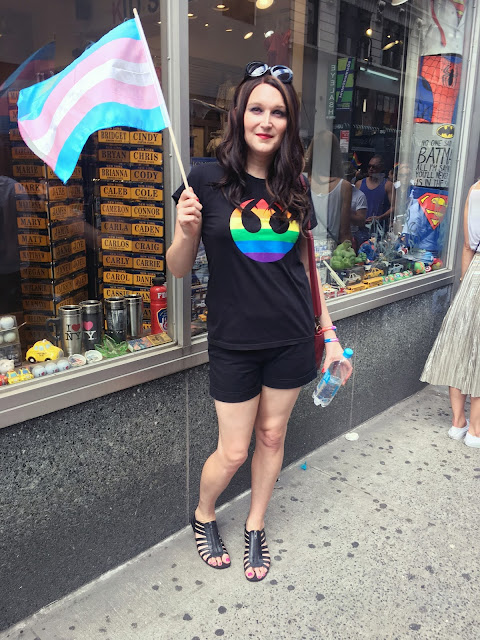 This year, I was excited that I finally got to wear my Rebel Alliance rainbow flag shirt! I'd ordered it for last year's pride but unfortunately it didn't come in time. This year I got quite a few compliments on the shirt. Now I think I need to get another in transgender colors. That'll probably have to be a custom job though. 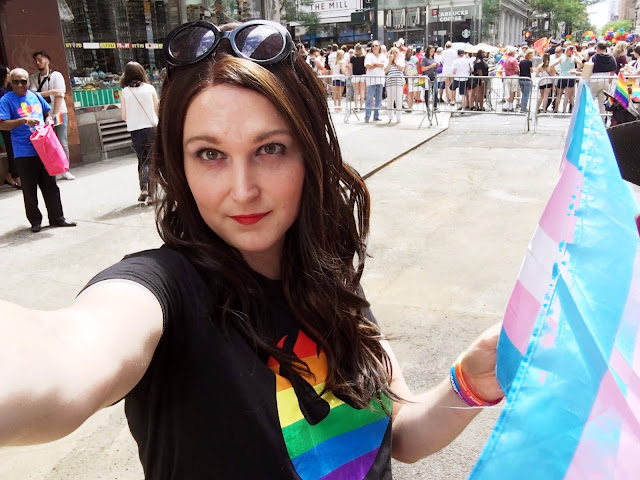 One of the nice things about marching with the New York State contingent is that it's like the third float. So you get started super early. We began marching at like 12:05pm The march, a mile down Manhattan from 34th down to the Village is always fun. It's beautiful to see how many people come out to celebrate. 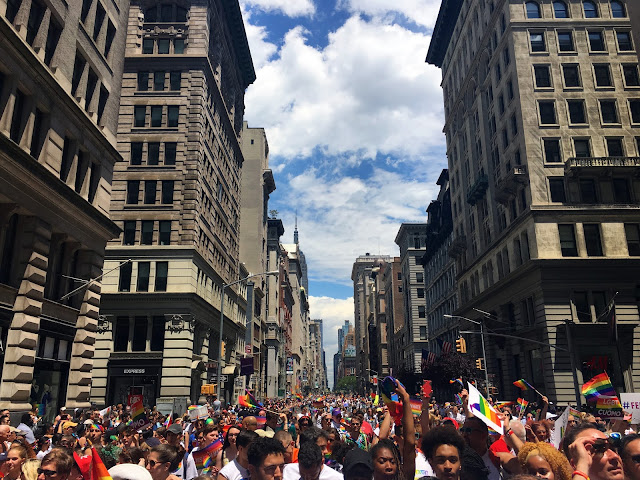 We met one transgender man who was so excited because this was his first time going out in public without a shirt. And that's the amazing thing about pride. It's just a place without judgement where you can be who you are. That's a beautiful thing and it's always worth celebrating. 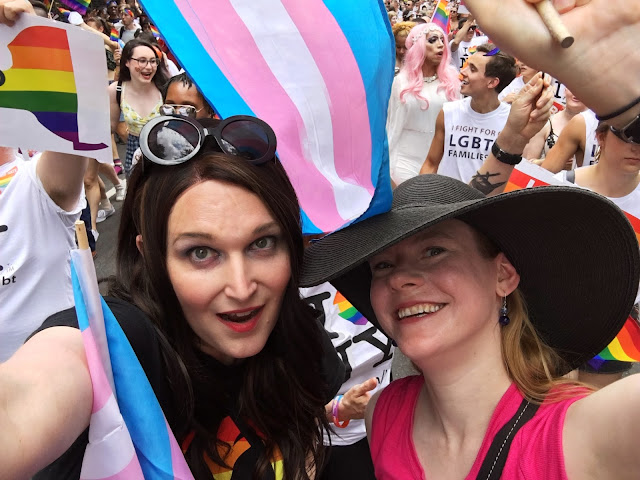 It was especially meaningful for me this year. This is my first year full time and the year where I cam out to so many people. There was a lot to celebrate. I waved my transgender flag proudly. And I loved, loved, loved that my partner Kath was right there with me. This was our first time marching in the parade together. There's something so nice about being able to wave a transgender pride flag while marching with your partner. That's a good moment. 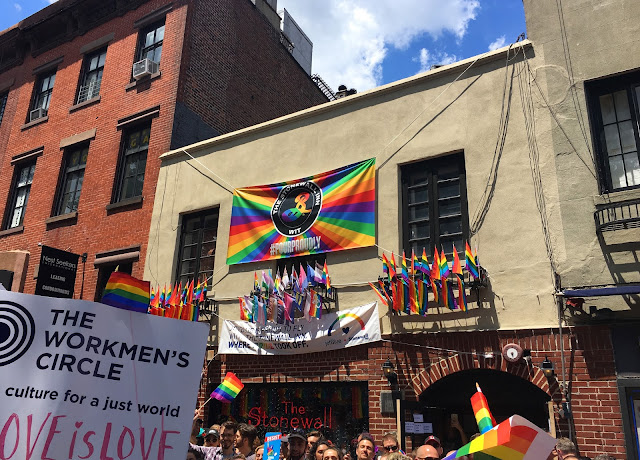 As the parade wound its way through the Village, I pulled out my phone to take a photo Stonewall. It's an icon. It's the birthplace of the LGBT rights movement. Trying to take a photo though, proved slightly problematic. My phone only had a black screen all the sudden. What was that? Oh, that's a phone call. I get so few I'd actually forgotten what getting a phone call looked like. It was my dad. Who I'm still not out to.

Why? Because I don't really have a relationship with him nor do I particularly want one. He's an evangelical nutjob Trump supporter who gets all his info on life from Fox News and Rush Limbaugh. He's got a PhD yet denies anthropogenic climate change. He's a young earth creationist. I grew up listening to his rants about how horrible gay people were. I haven't spoken to him in over a year. I'm good.

But, a small part of me wanted to answer. Just so I could say "Hi dad, I am currently marching with Governor Cuomo in the New York City gay pride parade. And I'm actually standing in front of Stonewall Inn, birthplace of the LGBT rights movement. Because I'm a transgender woman and a lesbian to boot." It would have made a good story. Maybe I should have lied about it. Ah well.

After the march we were exhausted. There's something in particular about being in the sun that just exhausts me silly. Even though it was only a one mile walk, we were beat! It was like two o'clock and we were done! There were actually a few friends we wanted to meet up with, but after the march the last thing we wanted to do was fight our way through super dense crowds. 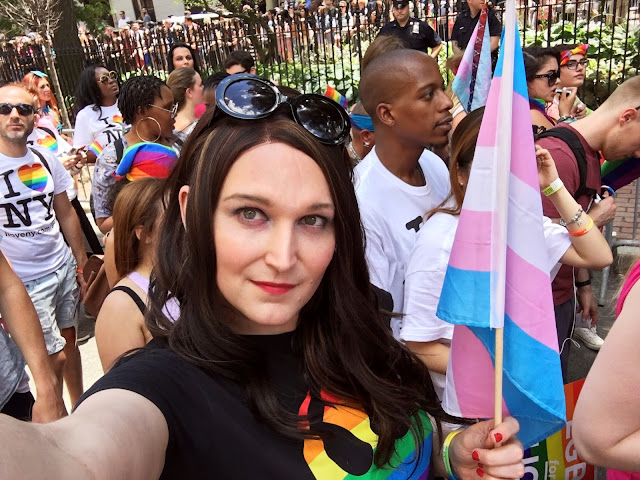 Instead we walked south and found Ear Inn, an old favorite haunt of mine. As I tweeted at the time "We're here, we're queer, it's hot and we need beer." 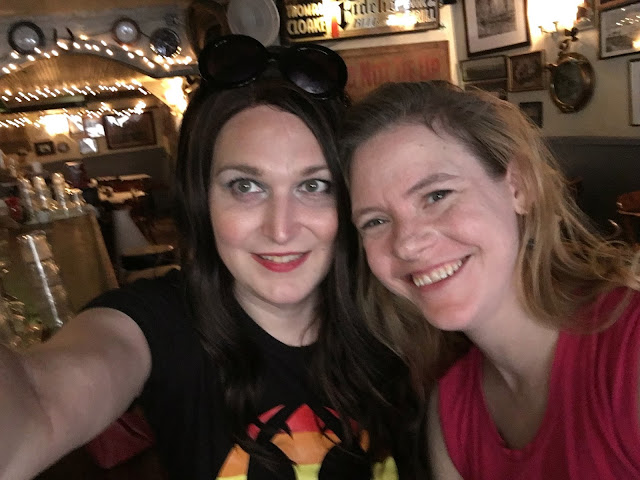 Next year, I think I'll skip marching. Sure, it's fun to actually be in the parade, but you miss so much stuff. It turns out Chelsea Manning was on the ACLU float, which was right in front of the New York State contingent! But we didn't see her because we were marching. Plus we missed the Broad City float too! Next year, I think it'll be more fun to go as an observer and enjoy the parade and party with some good friends. I'm sure there will be lots more to celebrate next year.

Also here's a bonus! Kath is super good at Where's-Waldo'ing us in crowd shots. The fact that we were the only people in the group waving transgender pride flags made it fairly easy to spot us. Here's a few pics of us that Kath found on ABC 7's coverage of the parade. Plus one we found on the governor's flicker, where you can see our trans flags waving. 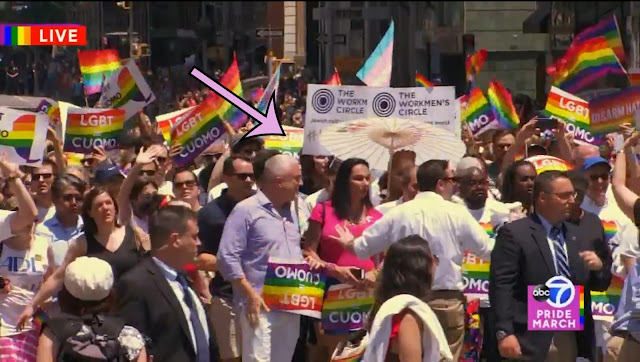 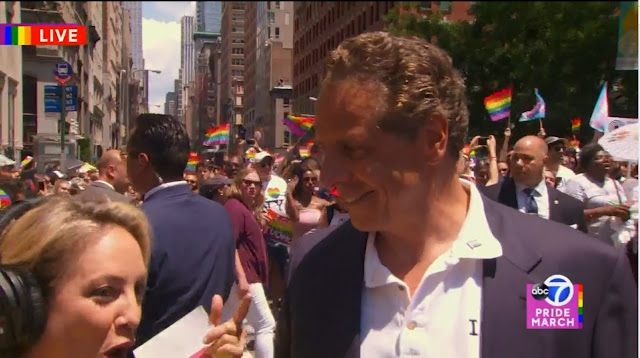 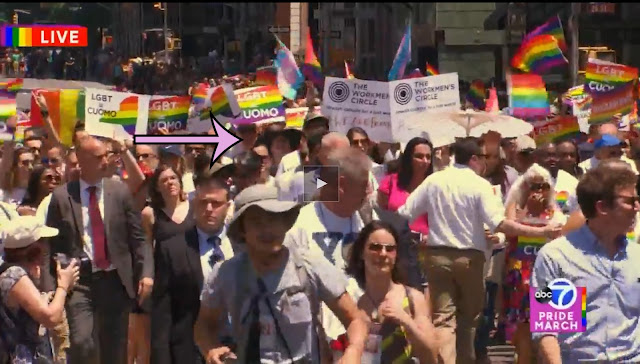 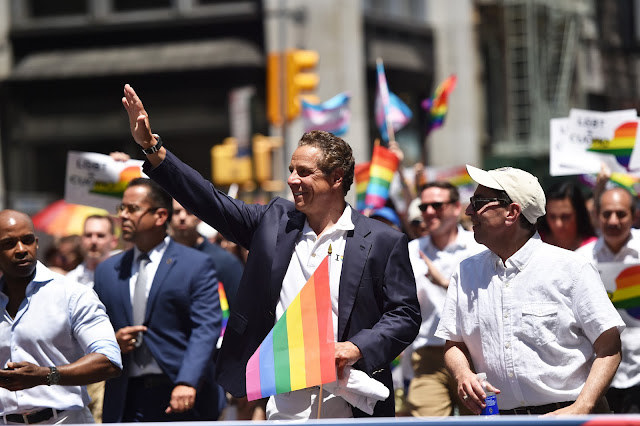 Happy pride month, everyone!
Posted by Faith DaBrooke at 8:07 AM