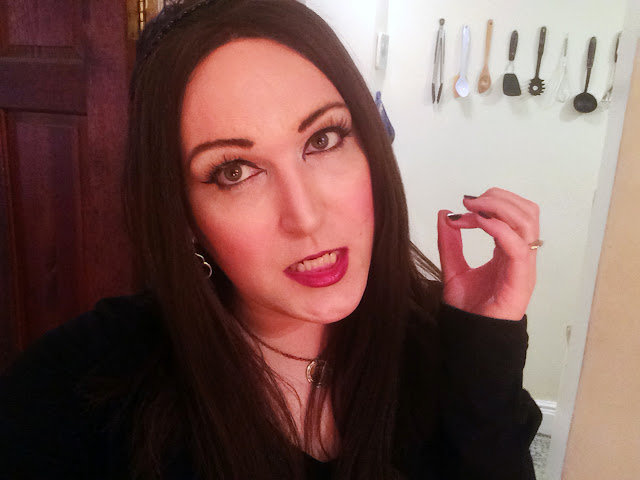 Back in the day I was super goth. I loved the styles, was friends with all the fetish models on Myspace, wore fishnets, boots with tons of buckles, corsets, gobs of black eyeliner, deep purple lipstick, shopped at Trash & Vaudeville, went to Black & Blue Ball and listened to industrial music. They were good times.

Here's me a decade ago, maybe not at my most gothy, but fairly close to it. 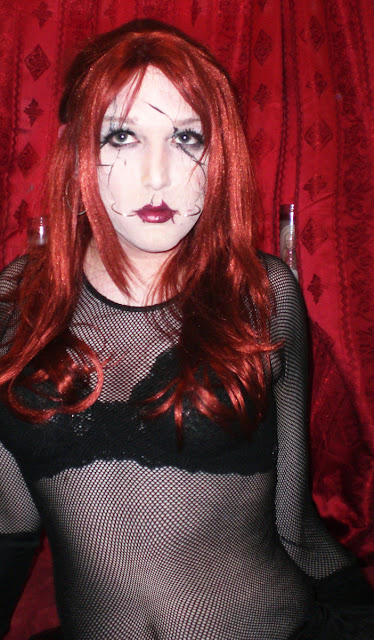 And here's me at work the other day looking the like the mousy nerdy girl character who finally loosens up after she meets the guy who teaches her to carpe all the diems.

Well, today I got a surprise day off work thanks to 10" of snow. Actually I'm not even sure why they closed the office because, I mean c'mon it's NYC. Ten inches of snow is something we can all handle. But, hey, free day!

With a day that I was going to spend alone (my partner still had to report in) and mostly inside, I was left to try and figure out what to do with eight whole unexpected hours. Yeah, I had the internet and sure I have various video games and yes, there's a large DVD library and all of Netflix at my disposal. There were also some cleaning chores that were tad overdue. Well, those things are all fun, but I thought what would be most fun was playing around with gothy makeup and getting dressed up all dark like I used to! 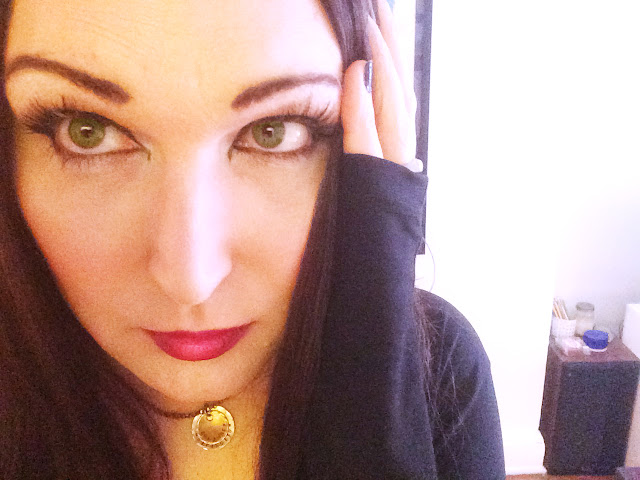 Apparently, doing goth makeup is easy, provided you actually know how to apply makeup. Thankfully, the past ten years have taught me quite a bit about makeup. Mostly it was the last five, after I discovered /r/MakeupAddiction which really helped me step up my game. I've learned how to do my brows, how to contour and how to do eyeliner for a hooded eye. I'm still trying to master the proper eyeliner wing technique but I'm getting there. 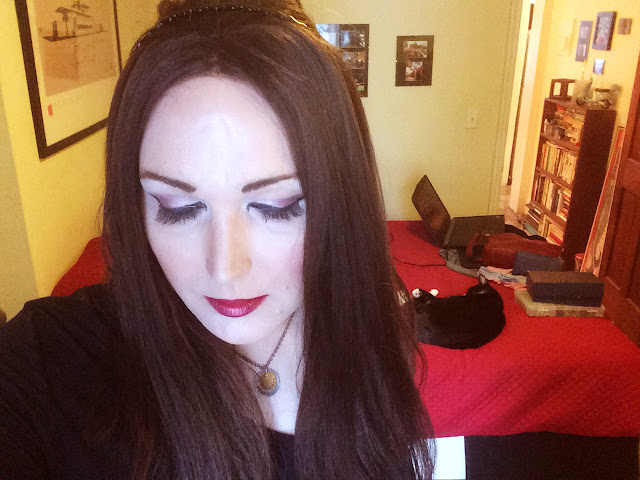 For my goth makeup, I started with my usual foundation then did my contouring. Only instead of my usual super pale flesh-tone powder I used for the highlights I used white eye shadow. I figured that would give me the proper deathly pallor. It did, though it required a lot more blending than usual. The white I used is actually the Wet & Wild white which is surprisingly high in pigment despite costing only $0.99.
Next I did much darker and thinner brows than I normally do. Then I did a heavy smokey eye in purple with a lot of blending. If I'd have had dark red I might have used that but I felt purple was sufficiently royal and deep. Maybe next time I'll try a red or a black/silver and see how that looks. I did a nice heavy black eyeliner and actually did black eyeliner on my lower lids. Normally I do a beige on the lower lid, which they say makes your eyes look bigger. This time though I definitely wanted some dark black. Plus I did a dramatic wing which included an inner wing. I did some white highlights below my eyes and in the inner eye. Then I finished my eyes off with some fake lashes. Believe it or not I even managed to mostly get the fake lashes on correctly. Mostly.

For lips I did a super dark, almost purplish red. For a while I tried to go more normal with lip colors in my daily wear before deciding that darker reds worked for me. Luckily I have a few in the collection. I did some central lip highlights with a pale, pale pink and then I was set. I threw on some black clothes (again easy) and I was set!

And of course in my apartment there's also now the question of light. My old place go great light and this place...not so much. Granted, I like my place. It's cozy. It's in a nice area. It's convenient to mass transit. But it doesn't quite have the best natural light.


Honestly, I have to admit that I really do like the goth look. It's like a power look for me, it really is. I guess because in my more formative years I was heavily influenced by 90s musicians, some of whom merely veered into gothic style, some of whom dove right in. Smashing Pumpkins, Garbage, Stabbing Westward and others rocked long back clothes, boots, pale makeup, silver jewelry and buckles and a healthy embrace of the darkness.

And angst. You need a healthy dose of angst.


What was it that appealed to me about the goth look and persona? Honestly, I think it what really appealed to me was that it involves voluntarily placing yourself in the "other." When you dress totally different than the norm your whole look says to the world "You don't want to accept me? Good. I don't want to be accepted!" That's probably why so many trans girls are drawn to the goth sub-culture. It's the total "I didn't want to sit at your stupid lunch table anyway." 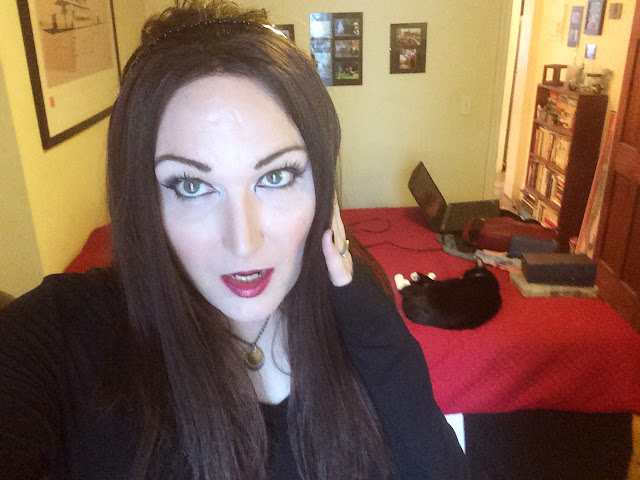 And really being goth isn't actually about being depressed either, I mean, not really any more than any other subculture. It can be fun, really fun, to embrace being The Other. It's incredibly freeing to openly declare that you're not going to try and fit in, you're not going to keep up with the Joneses and as far as you care the Joneses can fuck off. There's a great deal of power in that too. You're taking the reigns and announcing ownership of your person and your destiny. There's nothing dark or depressing about that. 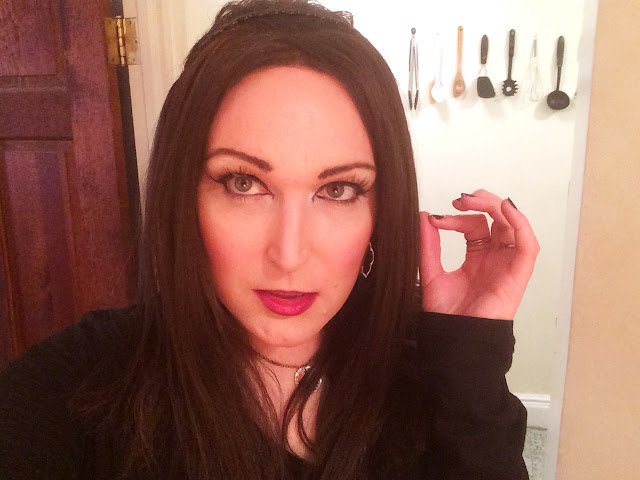 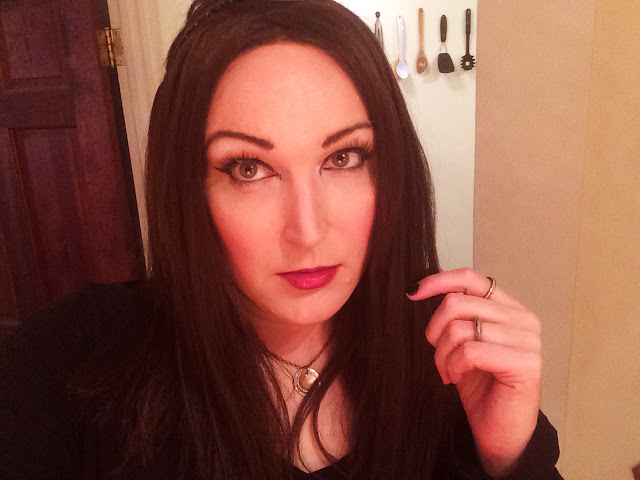 And a part of all of us loves the power that comes with being the villain. We all love a good villain We love the Emperor in Star Wars or Spike in Buffy the Vampire Slayer or Carabosse in Tchaikovsky's Sleeping Beauty. We love those dark villains who are smart, evil and get to break the rules. A goth persona gives you a bit of that same power of wicked malevolence. People see you differently and you can let your natural dark side creep out just a little bit more. It's a lot of fun to be wonderfully wicked and weird. 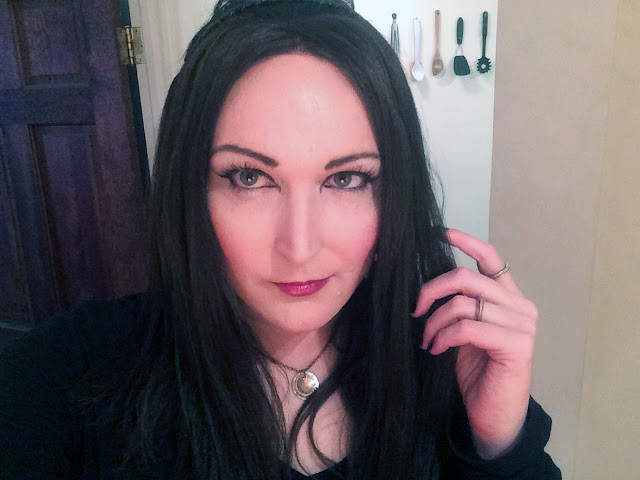 So why then am I dressing all mousy and normal these days? I guess partly because age mellows you a bit. Partly also, you do have to show up for work. And partly you realize that you your weirdness can transcend what you're wearing. You can be weird even in normal clothes. And you can find your weird crowd and have a grand time of things together even if you're not wearing fishnets or a corset or insane amounts of dark eyeliner. 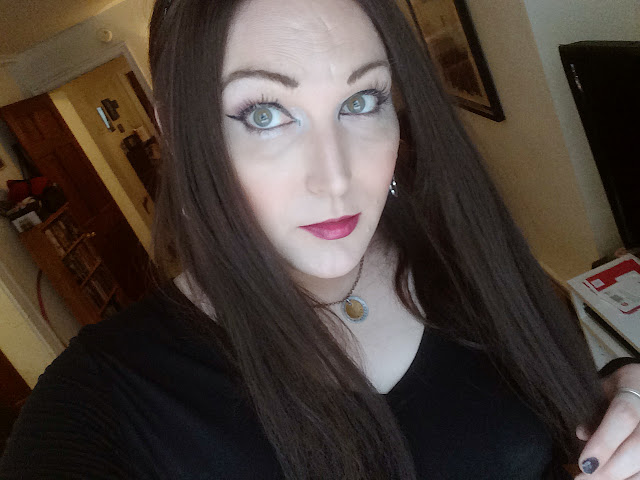 Posted by Faith DaBrooke at 9:53 AM