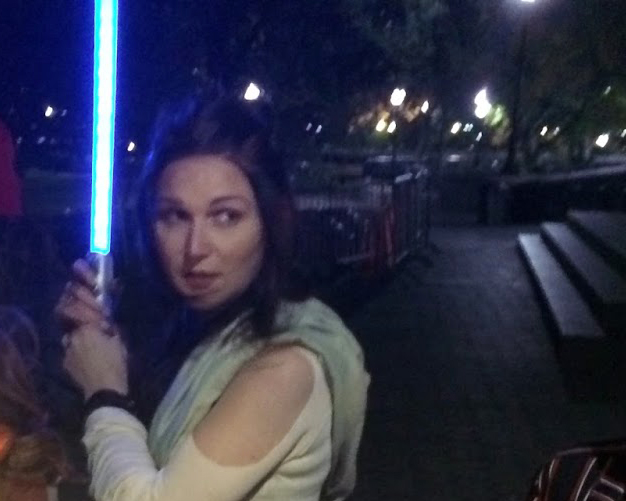 This year Halloween falls on a Monday, which basically meant that everyone had a whole weekend to celebrate. Halloween is a big holiday for me, actually I think it's the biggest holiday for me. By far. Thanksgiving is boring, Christmas is too cutesy but Halloween is basically all about fun. As a kid growing up in a crazy religious household we didn't get to celebrate it, but as an adult I've found it's super fun. Probably because I love dressing up. And I love candy and partying too.

Since my partner had to work Saturday, we planned most of our celebrations this year for Friday. And I must say that  October 28th, 2016 was a pretty good day for me. It was was one of those days where you don't even need to get past 2pm before you're like "Today's a really good day." Ahh. Such a nice day.

So, I took the day off work because I had some doctor's appointments and wanted time to get to court to finish my name change. I got to the court building at about 9:15. There was no one in line at the name change window so it only took about five minutes for the clerk to look over all my paperwork and to give me four additional stamps (bringing my stamp total up to 14). Then, believe it or not, I got down to the cashier and there was no line either. I was in and out of the Civil Court in 15 minutes! Plus I have a new legal name! Woo hoo!

Next I headed to the doctor for my checkup and she not only upped my drug dosage (yay to more femininity!) but also gave me  a shiny new certified copy of the letter I need to update my drivers license. Here's the fun part of the letter "In my medical opinion, Ms. DaBrooke is a woman. Ms. DaBrooke has had appropriate clinical treatment and has successfully completed her transition from male to female!" Well, I don't quite feel like I've "completed" much of anything, but hey, I'll take it. So I've got a girl name and I've got the letter the government requires to legally change my gender! Go me!

Then after that I went home to get into my Halloween costume.

This year, I was super excited to be going as Rey from Star Wars: The Force Awakens. You know, that movie with the transgender droid BB-8. 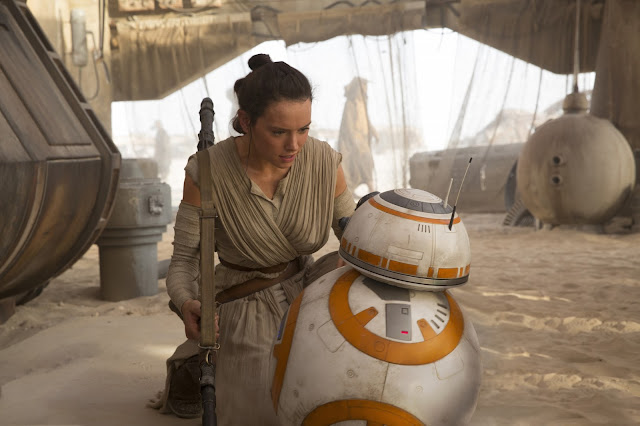 I loved The Force Awakens, saw it 6 times in theaters and Rey was one of my favorite parts. She's an awesome new addition to the world of Star Wars and c'mon who wouldn't want to be her? I mean, the kicking ass parts, not the growing up unloved in desperate poverty parts.

As I mentioned, I like to take Halloween seriously, so I started my costume back in August. Yes. In August. That's when I picked up the fabric and started a Google doc of supplies, notes and reference photos. You know, I never got to dress up when I was little because Halloween was satanic, so I'm making up for it. 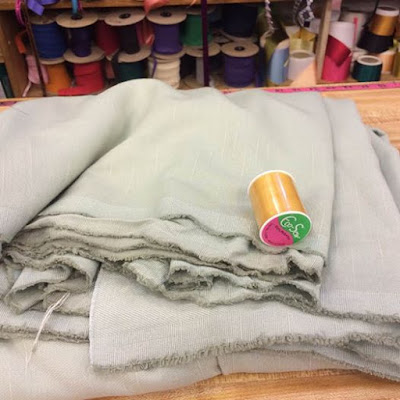 Plus, this was going to be my first time doing Halloween as a girl (not counting all those times in past years when I went as "a girl" because I finally had an excuse go out in public in girl mode).

My first step was the hair. My girlfriend was happy to help me get Rey's buns just right. I took a few preliminary photos just as a test. Normally I like letting my hair hang down in my face because I think it helps me pass better. This look was a little different since Rey's hair is pulled back. But I think I reach a nice compromise with a bit of hair still down to frame my face but most of it pulled back. 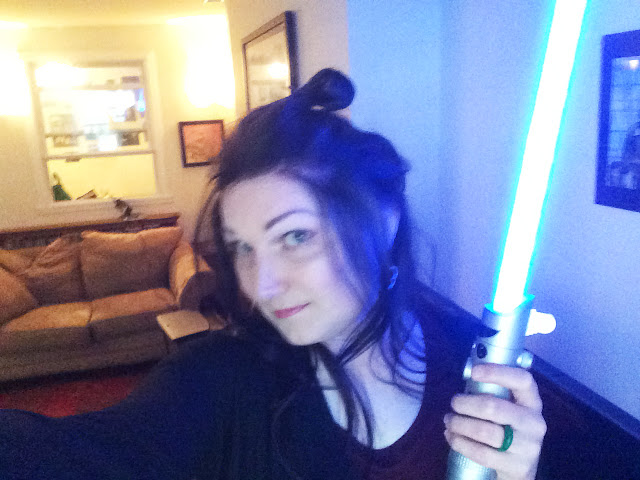 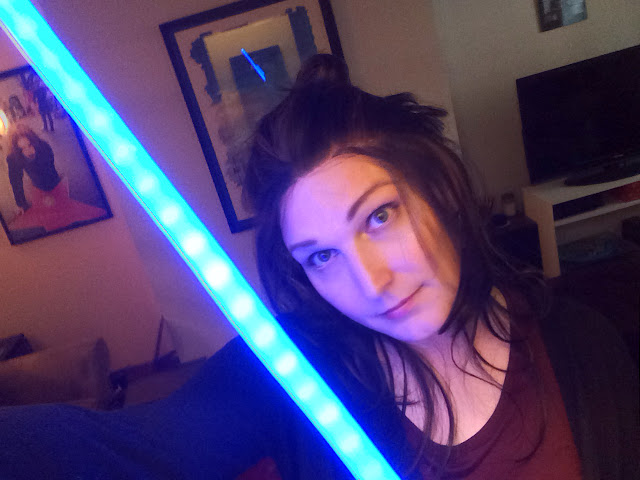 I got the Disney store lightsaber which is so much fun. It lights up and it does all the sound effects so you don't have to go "vmmmmm" with your mouth. It even has the iconic start up and turn off sounds and it makes the crackle when you hit something. Super fun. Though, it's slightly unfortunate that my poor dog is afraid of the hum. Poor little pup. 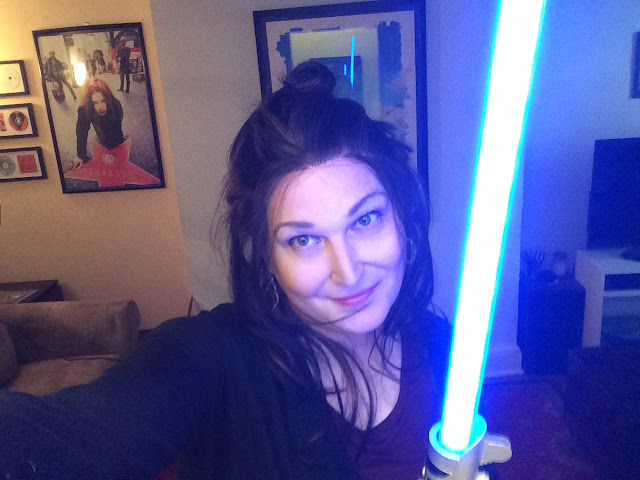 Well, it didn't take long to get dressed and then I was Rey! 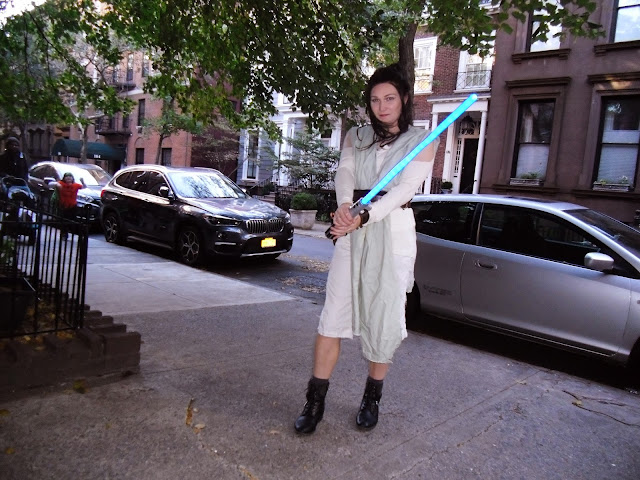 My next step was to head to work. Yes, I was going to work in girl mode. Sure it was costume girl mode, but it was still girl mode. Consider it a soft coming out.

The thing was there was a big outdoor movie event that I organized and was instrumental in making happen. So I totally had to be there. Plus we were showing Beetlejuice which was my girlfriend's favorite movie when she was growing up. So, her and I and a few of our friends were going to watch the movie then head back into Brooklyn for a big party at Littlefield in Gowanus.

I was a little early, so I had some time to take a few selfies. And I even managed to catch a bit of golden hour. 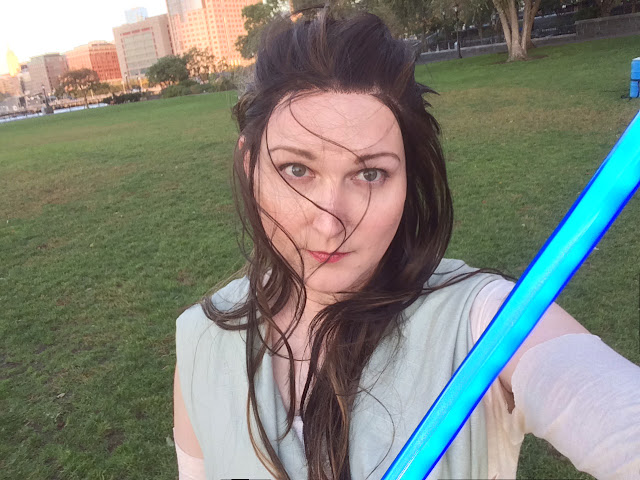 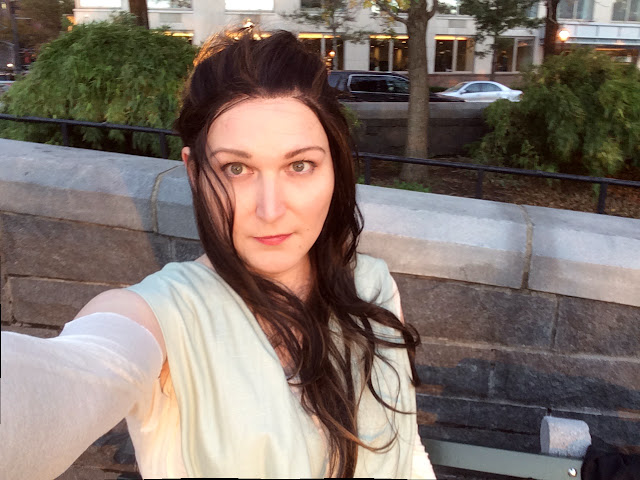 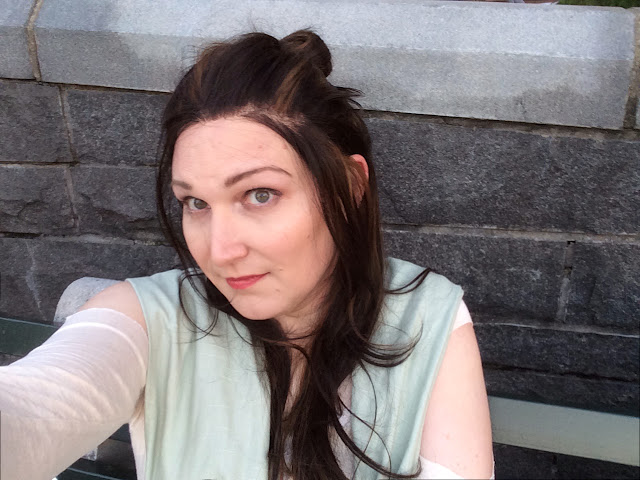 No one from work seemed to bat an eye. You know, it's Halloween. As I write this, I have only eleven work shifts left in guy mode and then I'm out as Faith at work. So, at least now people won't be too surprised.

It worked out pretty well, I guess. At least with the whole presenting female around co-workers thing. I think I can nail working as Faith. I'm honestly looking forward to it at this point. Don't get me wrong, I'm still terrified, but the soft coming out really helped me feel a little less nervous about the whole thing.

It was freezing Friday night, but I managed to brave the cold for at least a few pictures. I mean, c'mon, this is me we're talking about. There's gonna be pictures. 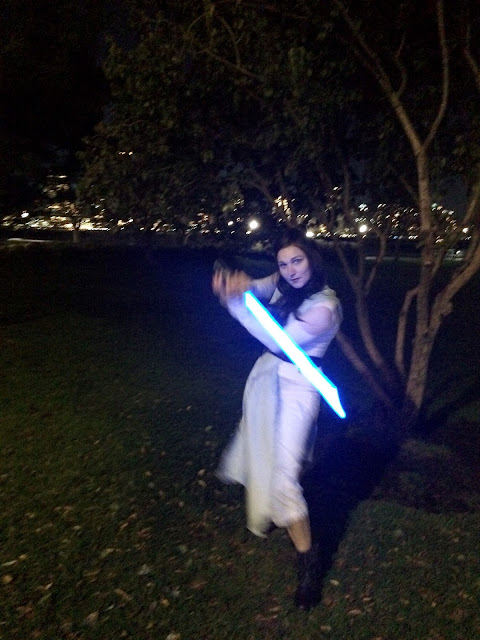 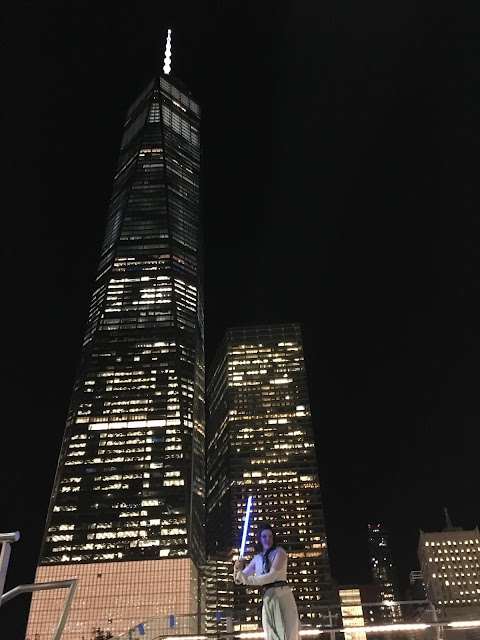 Not only was it cold as heck, but it was also insanely windy. My hair ended up getting whipped all around like crazy, but I managed as best I could. As cold as I was, Rey must have been freezing on Starkiller Base. Which reminds me, as soon as it snows, I totally need to run to the park to get some pictures. Those'll be awesome.

It was nice though, to finally get back inside. We stopped at a bar for food and a friend of mine (who was dressed as Beetlejuice) ended up getting lots of attention as everyone seemed to want a photo with her.


After that, we headed out to a Stranger Things themed party in Brooklyn. For a bit I wondered if I were committing a faux pas showing up at such a party not dressed as Eleven or Barb, but there were lots of different costumes on display. Okay, I'd say probably 20% of people went as Eleven, another 20% went as Dustin, and another 20% went as Joyce. Then the remaining 40% of people had all kinds of crazy costumes.

I ended up making friends with a girl dressed as Gogo Yubari from Kill Bill, Vol. 1. Mostly, I think she was just happy that someone finally recognized her costume. And speaking of recognizing things, I happened to randomly run into someone that I went to high school with. How random is that? He totally didn't recognize me, and so I had to out myself, but he and his wife were quite friendly and they actually adapted to my gender change pretty quickly. 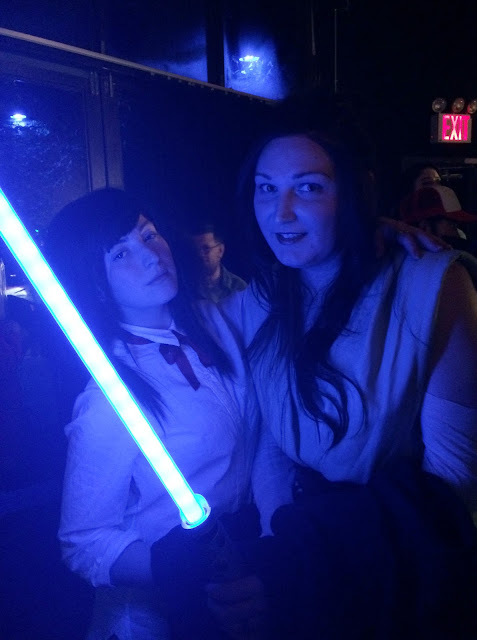 I do know that some people would hate to out themselves but a part of me doesn't mind. You know, when I get down it it I'm actually a little bit proud of my transition. It hasn't been the easiest thing and it has involved a lot of risk and courage. So, I do think it's an accomplishment that I can take pride in. Maybe one day I'll try be stealth but for now I'm happy to say, you know, I've come a long way and I'm not ashamed of who I am. 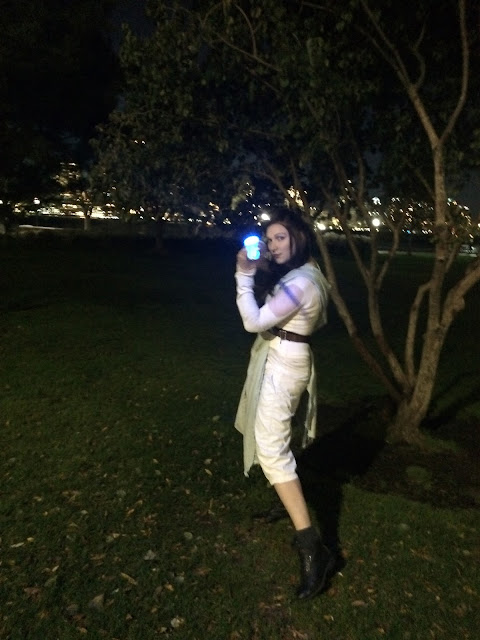 Plus I have a lightsaber. And that's pretty cool too.

Posted by Faith DaBrooke at 6:17 AM