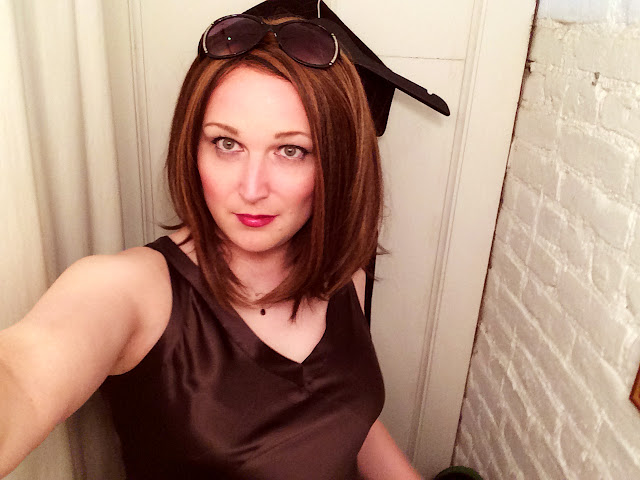 Ever heard of prom for grown ups? Yep, that's a thing. Because it's 2016 and I live in Brooklyn and despite my best efforts, my circle does overlap a little with the hipster circle in the Venn diagram. I mean, I have a record player and a bike and live in Brooklyn after all. Grown up prom is a thing we do in Brookyn. It's basically prom, except there are no chaperons and you don't actually have to sneak in alcohol. When I first read about grown up prom, I thought it sounded awesome and couldn't wait to go, but always seemed to find out about them after they had happened. Luckily, I have cool friends and one tipped me off to an upcoming prom.

Now, a little background. I was kind of a freak in high school; you know, one of the punk, goth, alternative kids. And I was definitely too cool for something as lame as prom. So in my junior year, I didn't bother to go. Why would I? Some lame school dance? Why would I do that when I could drive around aimlessly with my friends and then hang out in parking lots? Now that's living!

Actually, I did go to my senior prom. For about 15 minutes. Then I got kicked out. Mostly because it was because (as a young guy back then) I had worn shiny silver pants, a torn up black t-shirt, fishnets on my arms, black nail polish, black eyeliner and a fuzzy leopard print trench coat. Yeah, I was pretty cool. But, the principal felt I had violated some sort of unwritten dress code and kicked me out. Of course, I immediately snuck back in, then said "screw this" and left, this time of my own accord.

When my freshman year of college came around, a friend of mine, who was still a senior in high school, suggested that I come as a girl as her date. Now, this was something that really excited me. Imagine, getting to shop for a beautiful prom dress, having your hair and makeup done and getting to spend the whole night out at a dance as a princess! I'd be in heaven.

Unfortunately, at the time I was still terrified of being out, especially if it meant coming out at my former high school, in the Southern town where people knew my parents and family and at a time in our nation's history when gender-nonconformity was not quite as well received as it is today. So, despite my dreams of wearing a pretty dress and being a princess for a night, I ultimately decided to decline. Would that be my last chance to be a princess and go to prom? I thought so.

In the end, the hipsters would save the day. Hipsters are kind of like Aquaman in that regard. Always saving the day. This time, now, in 2016, I was going to actually get to go to prom! I could wear a dress and do my makeup and dance! I'd finally be a princess, out in public, out with friends and have a super fun, awesome night. There was just one problem. By the time I learned about it, prom was only a week away! I didn't have time to order a dress online and didn't quite have the funds to buy anything elaborate. Plus, my girlfriend, who would be my prom date, didn't have anything that would work. So, thrift shops it was!

We set out on a Saturday and plotted out a bunch of nicer thrift shops to visit. There were Housing Works stores on 10th, 17th and 23rd, Angel Street on 17th, and City Opera on 23rd. This would be a good day of thrifting and hopefully we could find some cool, cheap prom dresses for our big night out. First stop: Housing Works on 17th.

Housing Works on 17th is one of my favorite thrift shops in the city. It might be my actual favorite, but their fitting rooms are terrible. First off, the fitting rooms are tiny, secondly there are no hooks or chairs to place any of your stuff. So you just have to pile your stuff on the floor as you try stuff on. But, luckily they do have some big mirrors right outside so you can get some good views of how you look. While we didn't find any good prom dresses, I did happen upon a super nice, rather expensive and seriously well made grey shift dress that fit me like a glove. It was probably about $250 new and I picked it up for $30. Not too shabby, right?

Our next stop was Angel Street, which does in fact have an amazing fitting room. It's huge, has triple angled mirrors, a chair and a full on hat rack/coat rack for all your stuff. Even better, Angel Street had an entire rack of prom dresses, maybe twenty five or thirty in all. We had hit the mother load! They had silver, green, red, white, purple, everything! Some of them slinky, some with big crinoline skirts, all with satin fabric and delicate little touches. It was perfect.

Immediately, I grabbed a few I wanted to try on, then my girlfriend took a look through the rack and selected about five or six for herself. The downside of these was that they were either floor models or custom fitted or something because they didn't have any sizing info on them at all. Rather frustrating for me as none of them fit me! Luckily though, my girlfriend found three for four that fit her perfectly and looked amazing. She settled on a slinky green dress that had an Empire waist and a classical feel. She looked fantastic! Plus she found a few nice Ralph Lauren dresses for work, so we were all set.

Our thrifting trip ended up being only two of the places we had planned, so we figured it was time for some drinks! We headed down to Fiddlesticks in the West Village. It's one of our favorite bars for a casual pint during the day, though it's also become our post-parade Halloween destination for food and drinks too. We also laughed our asses off when the bar was mentioned on this Inside Amy Schumer sketch:


Okay, I am totally the prettiest girl in Fiddlesticks! Though we didn't actually smoke at the bar, because we're not that kind of people. Also we don't smoke. And even if we did smoke, we'd go outside. Ever been in bar where people smoke? It makes my throat hurt. Luckily there was no smoke so we just enjoyed our pints. 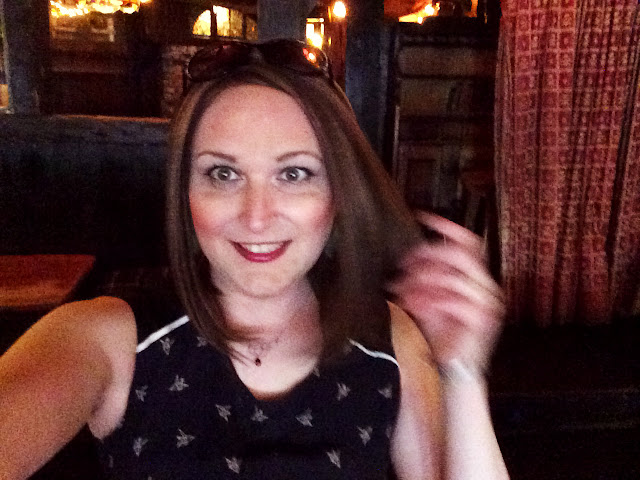 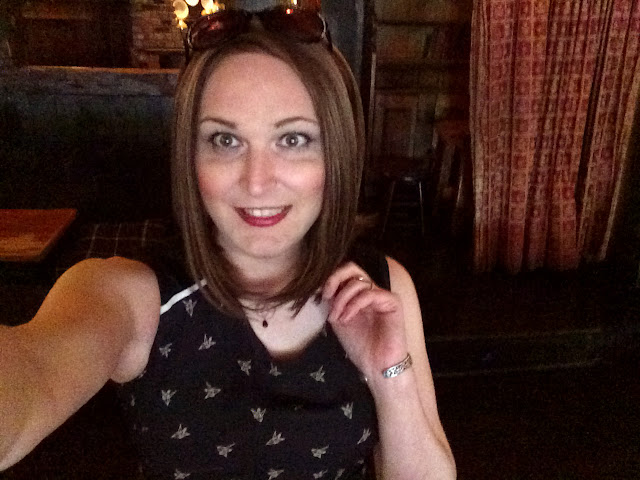 The light from outside was perfect for selfies. I couldn't resist. Heck, I'm like a shark. I can smell good light from a mile way and when I find it, it's a selfie-frenzy. 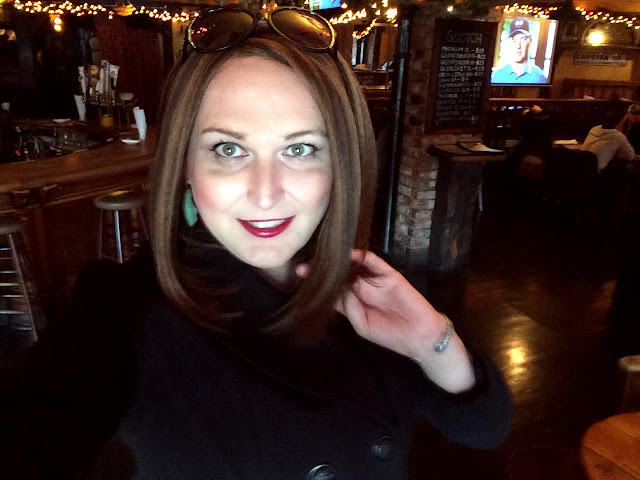 Also, the lighting in the bathroom wasn't too bad and I looked plenty cute. Plus there was no one else in there so I thought I took the opportunity to snap a couple more so you guys could check out my whole outfit. 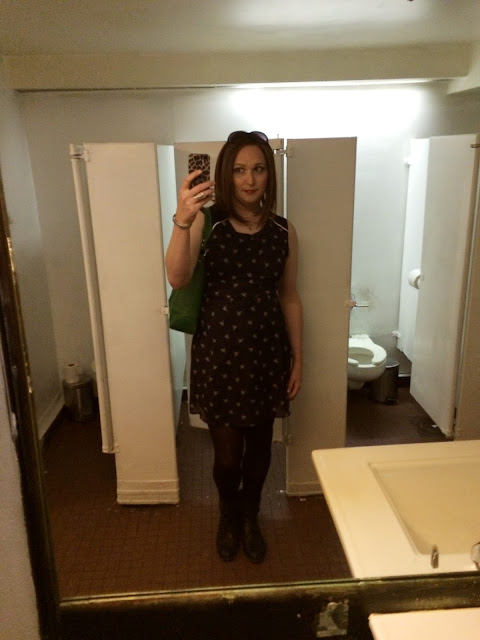 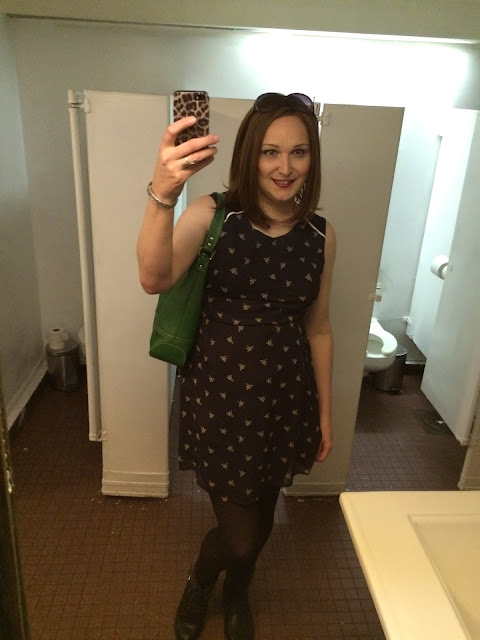 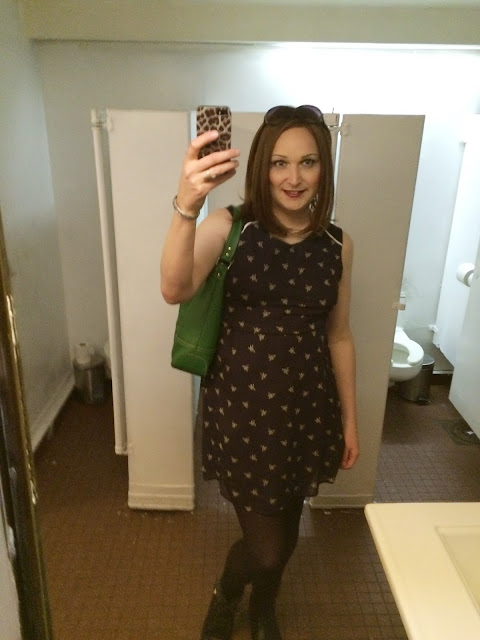 By then we wanted food, so we decided to head to one of our other favorite places, Cowgirl, also in the West Village. It turns out though, that between Fiddlesticks and Cowgirl lie a few more thrift and vintage stores and we were powerless to resist going in. The first was ridiculously small and carried actual vintage clothes, so everything was tiny, with strange stiff fabrics and falling apart. We didn't stay long or try anything on.

Vintage Thrift West was our next stop. This shop was kind of small, but I did manage to find a beautiful, long, 100% silk dress in my size. Taking it into the fitting room and putting it on, I realized that it fit me perfectly. And the real silk was super luxurious. It felt so amazing against my skin. It was like being caressed by God, or possibly Poe Dameron. 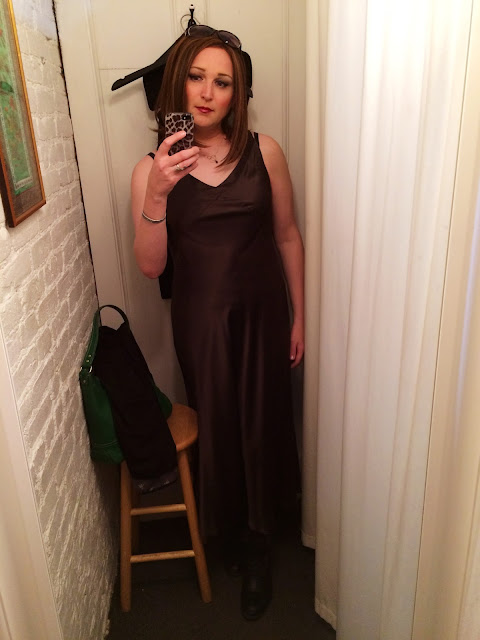 Plus, the fitting room had the absolute perfect lighting. It was the best lighting I'd ever found in my life. Needless to say, I was one happy girl and spent way too much time in there just taking pictures. They came out so perfectly and I think may be the best photos of me ever taken. 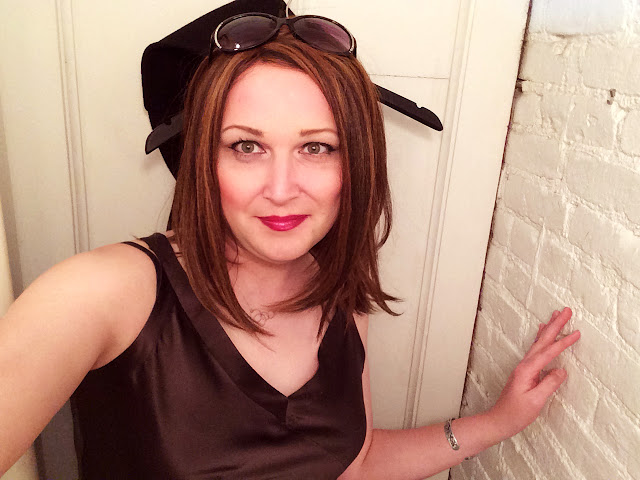 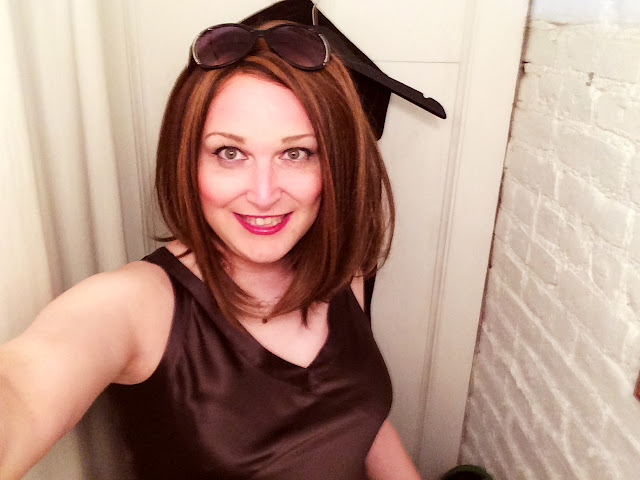 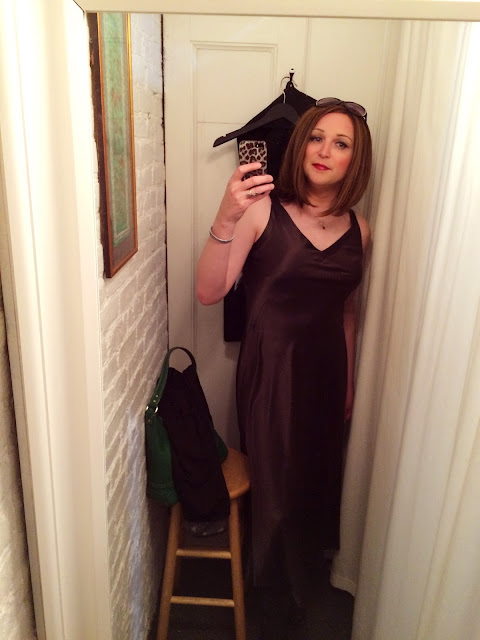 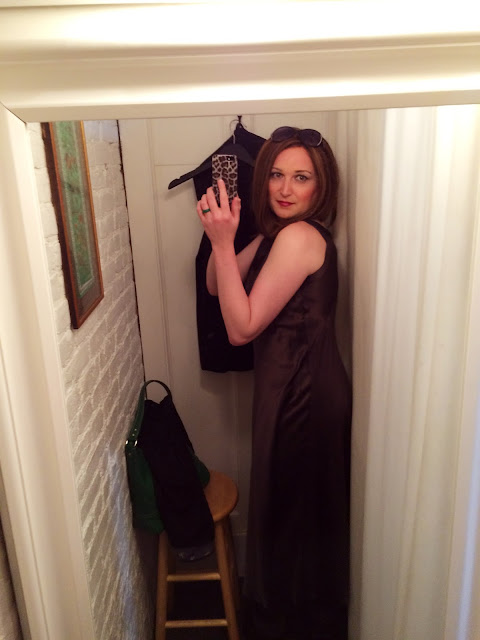 After a few hundred mirror shots, I decided not to get the dress. It was just too plain a design to wear for prom and it was too casual for work, too long and elegant for everyday wear. Plus it was around $50 and I didn't want to spend that on a dress that, while it felt nice and looked nice, probably would just hang in my closet and never get worn. Ah well. Life is about making difficult choices. 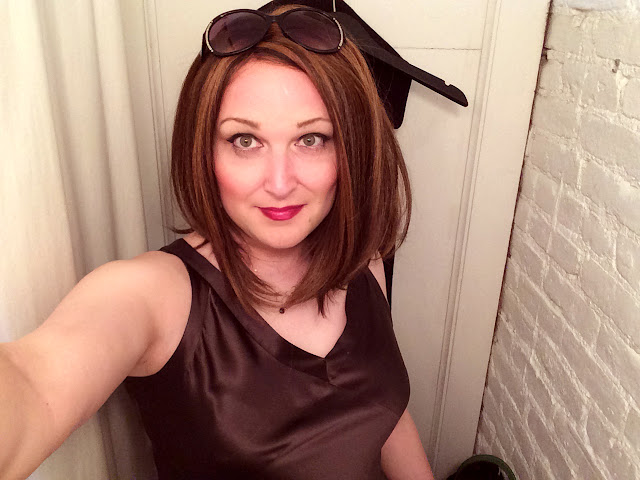 Okay, one more perfect light shot. Honestly, I will probably post more of them one of these days, you know, on a slow day when I've had few adventures to blog about. All in all, I had a great day out shopping, having drinks and getting good food in NYC. Life is good!

And check back because Faith is going to prom!
Posted by Faith DaBrooke at 9:40 AM