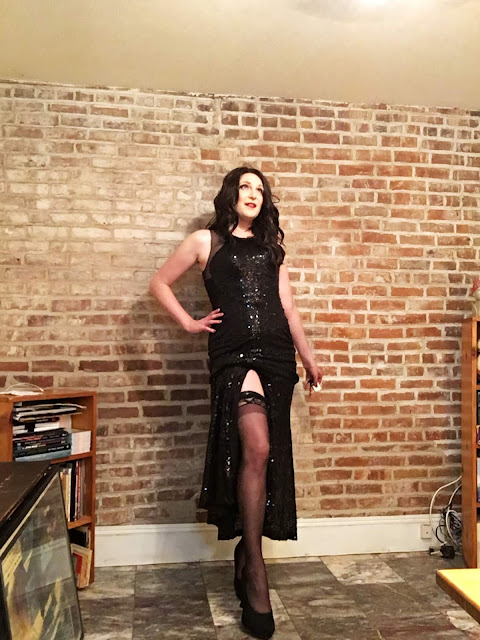 Though I have officially sworn off wigs as anything other than a fun fashion accessory, I still have a rather large backlog of unposted pictures from old brunette wig days. So here are a few I took on a recent day off. These are some of my sparky ones.

I have always loved sequins. There's some fun and glamorous about them. Over the years I have owned a few sequin garments and loved how shiny and sparkly they were. Most of them have been cheap and have shed sequins all over the house, but they were still fun.

Stray sequins have also come rather close to accidentally outing me. Back when I lived by myself, I remember one time when I mom was visiting and found a stray sequin. On that same trip she also found a fake fingernail on the floor. And yet, she was surprised when I came out to her. 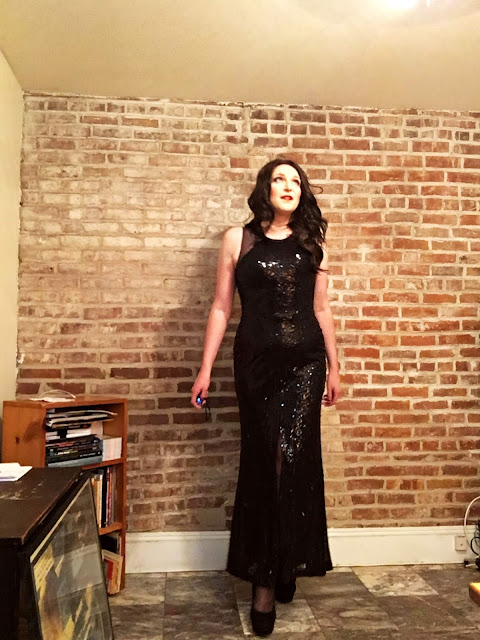 For most of my life I hid my female presentation. I felt like I had to. I was being raised by a Republican, military, Southern, evangelical father who was hard core conservative and homophobic as hell. He used to rant about how gross gays were and how they should be imprisoned. Who the heck knew what he would do if he came home to find his oldest son wearing a dress? He wasn't a violent man but I feared that, in that situation, he would learn to be violent. He was also constantly threatening me with military school. So, chances are that I would have been sent to a military school where my life would have been even worse than what it was at my Christian evangelical school.

There were, over the years, a few times when I came perilously close to being caught. The earliest I can remember was when I was about seven years old. My sister had an old ballerina costume that was in the "give away" pile. So I took it and hid it. One day, in my room, when I wasn't playing with my Star Wars toys or GI Joe's, I decided that it was time to try it on. So I did. That was the moment that my mom came in to ask if I wanted cut up bananas on my ice cream. She sat me down and told me that dressing up as a girl was no longer okay (despite it being tolerated when I was three or four). She discussed getting me a boy costume to play in and that was that. I never got the boy costume though. Ah well. Another time I remember being eleven or twelve. I was old enough to be left alone in the house. My mom and sister had gone off for some chore and so I headed downstairs to my sister's room. Her room was in the basement/lower floor (it was a weird 1970s split level design on a hill so who knows what story was what).

Thinking I had tons of time on my hands, I went straight to my sister's closet. This was a regular hobby of mine. If I only had a few minutes I would put them on, admire myself in the mirror, and maybe do a twirl or two so I could experience how amazing it felt to wear a dress. If I had an hour or more I would pick out a bunch of outfit to try on, then select one. I would wear it and then hang out watching TV with my legs crossed. Or I would walk around practicing a feminine walk. If I had more than an hour I might even incorporate makeup.

On this day I thought I had an hour or more. So I carefully picked out a few outfits to try on and laid them out on my sister's bed. Then I selected my first one and carefully put it on. It was at this point that I saw a foot go by my sister's window. It was my mom and sister walking back up to the front door!

Quickly as I could I ran to the front door, locked the deadbolt, and locked the chain. I heard my mom's key in the door, but the chain would hold her for a bit. As I listened to my mom yelling at me to open the door, I tore off the dress and scrambled to get everything back into the closet as quickly as I could. It was then that I realized I had nothing on but my underwear. I had left my own clothes upstairs. And to get there I had to walk by the front door, past the pounding and yelling. So I ran up the stairs, slid the chain open, and then kept running up to my room.

I got in trouble for locking my mom out. But that was nothing. That I could deal with. Getting in trouble for trying on my sister's clothes? I had avoided that. 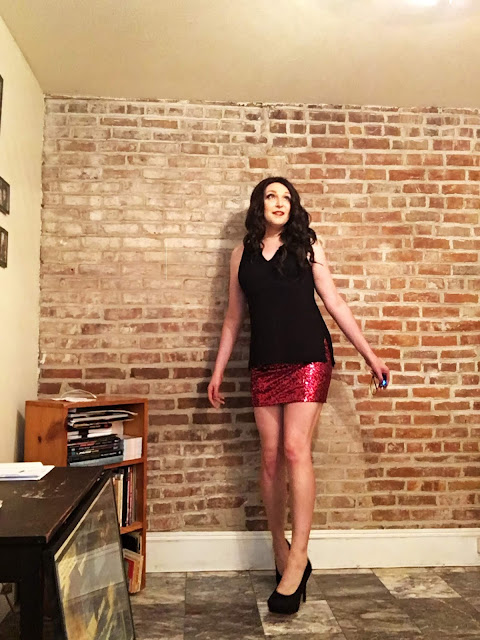 Another close call came one year at my grandmother's house. For a couple weeks each summer my parents would ship my sister and I off to my grandmother's house. My sister always got the nicer guest room and I ended up with my aunt's room. My aunt wasn't that much older than my sister and I. She was, I think, around nine years older than me and when I was about ten she was off in college. Most of her room was still had her stuff in it including a ton of clothes that she hadn't taken off to college with her.

So at night, after everyone else had gone to sleep, I would go through my aunt's massive closet and try stuff on. Unlike my tomboyish sister, she had beautiful dresses, prom gowns, and other amazing clothes. But the bedroom door didn't lock. To try stuff on, I would sneak it to the one room where I had privacy; the bathroom. Locking the door behind me, I would try on my aunt's wonderful clothes. And then, to avoid getting caught exiting the bathroom I figured the best thing to do would be to put the dresses in the laundry hamper.

Thinking I was being stealthy, I ended up filling the laundry hamper with tons of beautiful dresses, many of them probably dry clean only. For some reason I thought the hamper was completely anonymous. Like, my grandmother would just assume it was house laundry and do it without question. She actually did not do it without question. In fact, unbeknownst to me, she and my sister discussed and the blame was pinned on me.

But, there it died. Nothing came of it. I was as though my behavior was so bizarre that it was easier just to prentend nothing happened than to actually address why there was a young boy leaving dresses in the hamper. This story did, however, come up after I had come out to my mom and sister. And at that point, with nothing left to hide, I admitted it . 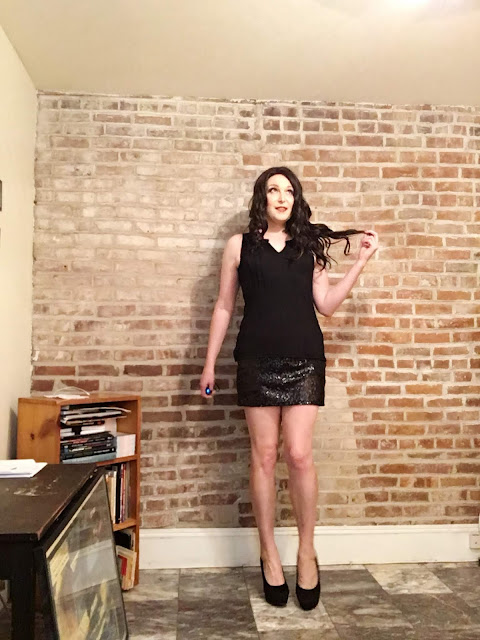 In fact, my coming out letter to my sister included an apology for trying on her clothes without her permission. So even though I wasn't always the best at hiding, I am happy to report that I made it out of childhood without getting sent to military school. 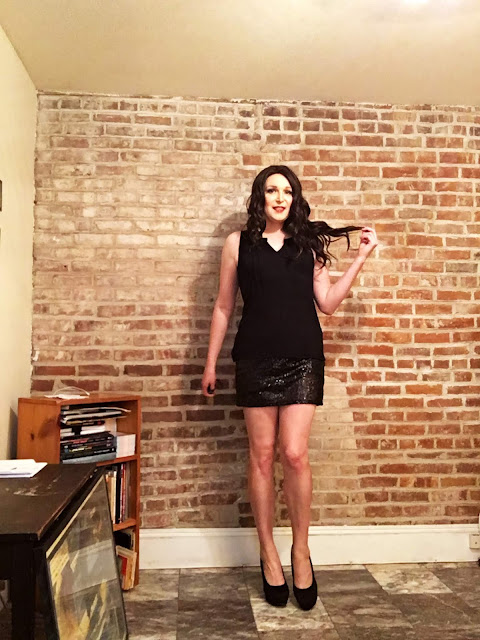 Posted by Faith DaBrooke at 1:27 PM