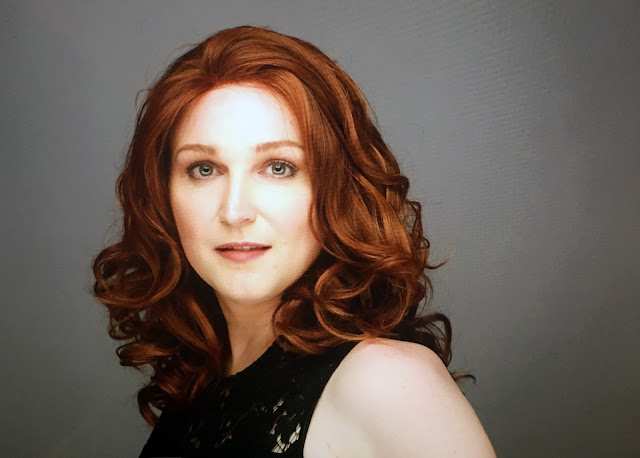 A you may have read, I recently signed with a modelling agency. But, in order to get cast I needed head shots. Not sure where exactly to get head shots (even though there are ads stapled up to street light poles all throughout the East Village), I went with one of the photographers that my agency recommended.

Now, I've been in a few photos before, but in general they were taken by me or a friend or partner. I am not, despite some Instagram evidence to the contrary, an experienced model. The photographer had an option of head shots for $200 or three or four looks for $325. What's a "look?" I had to look that up. It just means hair, makeup, or outfit change. The four looks option seemed like the best since I wanted something more than just head shots.

The week before the shoot, the photographer emailed me a list of outfit types to bring; solid tops for the head shots, a cocktail dress, two more casual brunch type outfits, sporty workout clothes, and a good variety of heels, sandals, and sneakers. The night before I tried on a bunch of outfits and did a little fashion show for Kath. Thankfully it wasn't too hard as I have a closet full of plenty of fun choices.

So that I could look my best, I made an appointment to get my makeup done at Sephora. They have a deal where you can get a free makeover if you spend $50. At Sephora that's like one thing, so I figured I would get an Urban Decay palette. I love the Urban Decay Electric palette that I have. It's wonderful; bright, colorful, and super high pigmented.

The artist who did my makeup used a special light meter or something to read my skin tone in order to pick out the foundation. What she ended up using was wonderful. For years I've used Maybelline Dream Matte Mousse. While effective, it is pretty heavy. But I loved what she used so I picked up a bottle of that. It's better than Maybelline but at $50 a bottle, I'm not sure if I'm quite ready to replace mine just yet. Beyond that she did a really light, no makeup look and I loved it. My brows have honestly never looked better. And it was a lot of fun. The next time I want to buy some fancy makeup, I'll just get the free makeover why not? 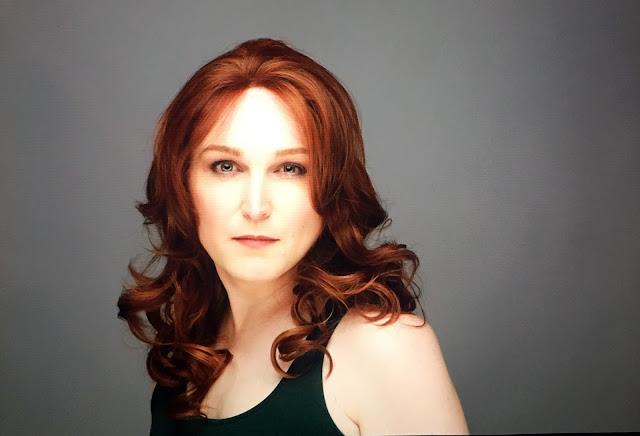 Though I was at least a little bit worried going over to a strange guy's apartment (like anyone should be!), the photographer turned out to be super friendly and nice. I didn't get robbed or murdered. So that's good. The photographer had a small studio set up in his apartment with his bathroom as the changing room. First, we looked through all of the clothes what I had brought. Picking out a dark green tank top, he suggested that we do head shots first. I had actually brought the tank for a workout look, but clothes are clothes I guess.

I had brought a wig along that I thought looked too curly and big, almost like big Eighties hair you'd expect see matched with some shoulder pads on the set of Dynasty or something. But, it's not too bad if I keep it clipped in the back. Unfortunately, the photographer wanted it unclipped. And even worse, he kept wanting to push it out of my face. I happen to love having hair to frame my face. It keeps my face from looking like a giant round Charlie Brown head. But, I went with what he wanted. After all, I didn't want to spend $325.00 to get unusable photos. This guy knew head shots and plus he knew what my agency wanted as well. So, we got some giant pumpkin head photos.

There were actually a couple fun new photography tips I learned from him. Firstly, he told me to keep my mouth just barely open in the shots. Apparently closed mouths don't look as good. It reminded me of something I once learned on a Muppet documentary; Muppets keep their mouths open just slightly when not talking in order to look more alive. Guess it works for people too. Plus the photographer told me to move my forehead and chin out in one motion. He said it would feel like doing a turtle impression but would make your jawline and neck look better. I like good jaw lines, so I happily agreed. Also, he had me do 3/4 shots rather than straight on. Apparently, my left side is my better side. I didn't know this. It's good to know. 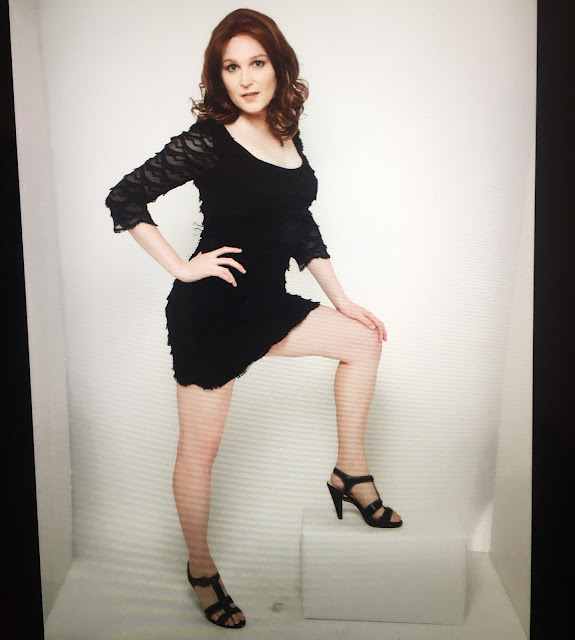 After about forty five minutes of head shots, he recognized the studio setup, and we moved on to some other outfits for full body shots. First up we did my black Guess cocktail dress with my favorite heels. He gave me a lot of direction to create negative space with my body. This went against my natural inclination to make myself small and compact with my legs together. But, he explained that negative space makes you look better and thinner. So I did a leg up, hand on my hip, one leg sticking out at the knee, and lots of other poses to create negative space around my body. I mean, who doesn't want to look thinner right?

After that I switched into a my red, black, and white patterned dress. I had wanted to keep wearing my Coach heels, but the photographer suggested that we switch to my regular black heels for some variety. Getting photographed for me was quite fun and I thoroughly enjoyed getting directions and following them. It made me feel like a professional model. I jumped, I posed, and I even pretended to take selfies. 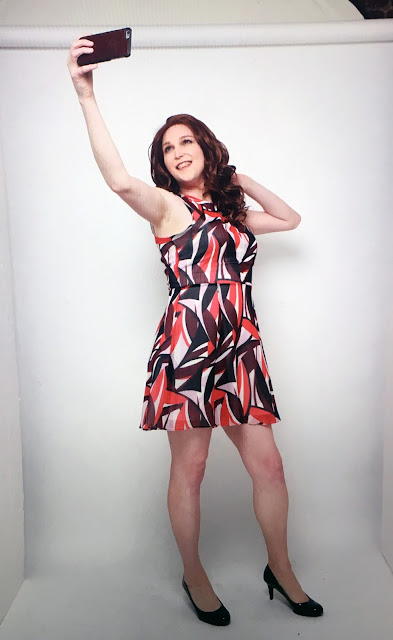 After we got a few hundred full body shots, we proceeded to head outside to get some lifestyle photos. It made me happy to hear that my agent had actually reached out to the photographer to specifically request lifestyle shots. It made me feel like they actually cared and wanted me to succeed. Of course, they don't get paid unless I get paid, so I guess it makes sense. 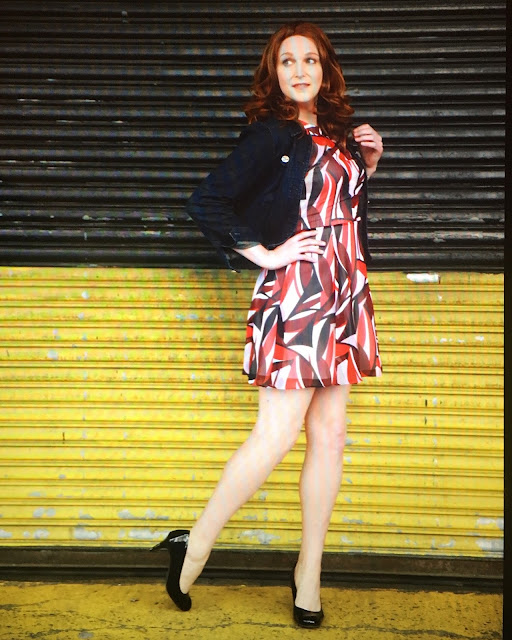 We started by walking around Manhattan's Upper West Side as the photographer tried to spot suitably grungy backgrounds with good light. We were busy shooting in a doorway when an drunken asshole came up. He tried to get in the pictures with me. Then when the photographer asked him to leave, the drunk said "I want a picture with the transvestite."

Fucker. I looked damn good. The last thing I was expecting was to be clocked! But I think the issue was that the photo shoot was drawing too much attention to me. Plus with heels I'm like 6'3". Still, I don't ever want to get clocked. It's awful and makes me feel like I'll never pass in a million years. I start to wonder if maybe everyone clocks me all the time but they're just too polite to say anything. Sigh. 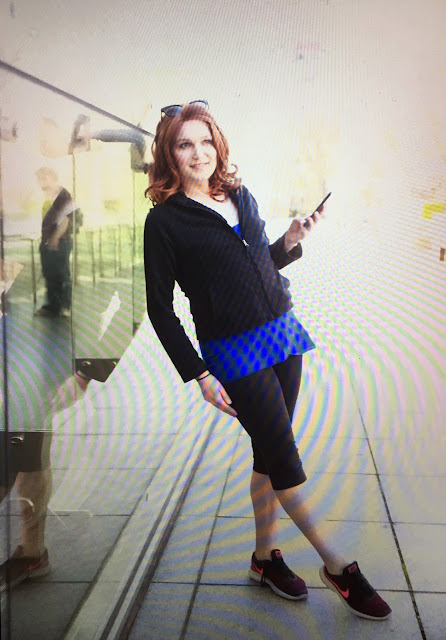 Our last shots were actually taken on the grounds of the Natural History Museum. There are some tables on a terrace and the photographer wanted to get some shots of me just casually hanging out there. He brought his laptop and an empty coffee cup like I was just enjoying a nice cup of a coffee while working on my laptop. He kept telling me to type on the laptop. But that's something that's always bugged me in movies. People don't type that often on computers. They use the mouse pad. But, he wanted typing so I typed. And I had to struggle to not take a sip of coffee out of habit!

The whole time the photographer was worried about getting kicked out since apparently you need permission for commercial photography. Thankfully no one spotted us so we didn't have to run from the security guards. Though that might have made for some fun lifestyle shots, right?

As I packed up my stuff, the photographer let me take a look at his iPad where he had downloaded some of the pics from his camera. That's where I got the photos for this blog post. I literally used my phone to take photos of his iPad. Hence why a few of them have some distortion and lines. He said it would take a week for him to get me the pictures. Then I can pick my favorite fifty to seventy photos. He'll pick some of his favorites, then send them all to the agency. Then they'll decide which ones will end up on my profile and on my comp cards. I'm super excited to see them all. 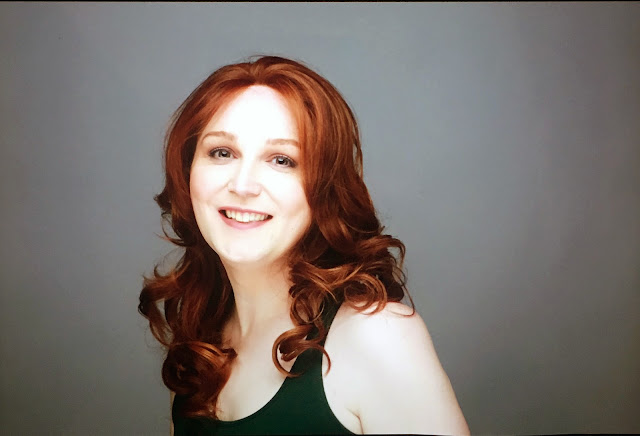 After four hours of modelling, I am not kidding when I saw that I was exhausted. Modelling is work. It really is. The next day myy back and muscles were sore from stretching into various poses. But it was super fun and I look forward to my next photo shoot. Hopefully I'll get paid for that one. :)
Posted by Faith DaBrooke at 12:31 PM