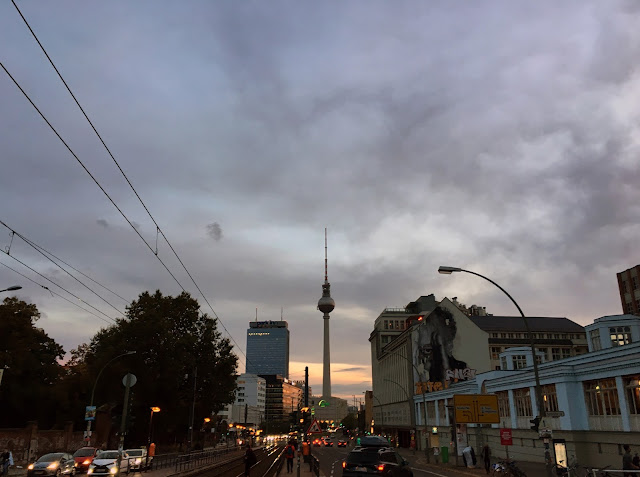 Way back in 1980, I was born in the Federal Republic of Germany, or as we called it back then, West Germany. My dad was in the US military and was stationed in Germany. So, like many an Army brat, I began my life in West Germany. I was maybe three or four when we left so sadly I have no memories of the land of my birth. So I was super excited when Kath and I booked a vacation there for this September.

There is one problem with Europe and that is that it is far away. So, our vacation started with one eight hour flight with a two hour layover in Frankfurt am Mein. Frankfurt is actually where I was born, so I actually got to see a tiny part of my birthplace. Though it was mostly the airport terminal. 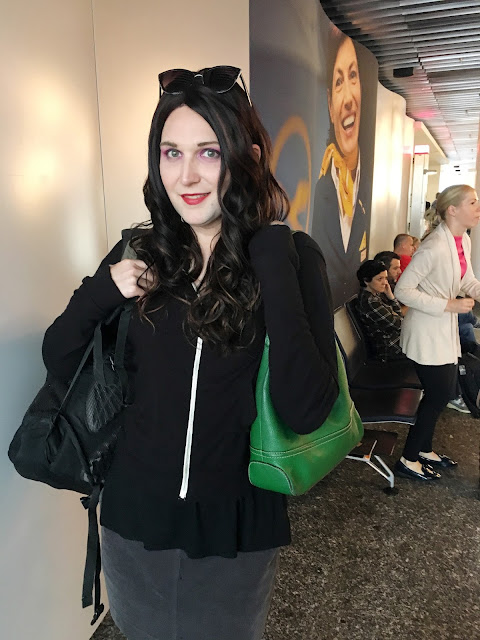 Thankfully I had no problems with the TSA. I put my breast forms in my carry on, so I always expect it to be pulled off the belt for a closer inspection. That happened this time, but the search was nice and quick. I've been lucky with the TSA thus far. Not sure if that's because I pass okay as female or if I look so bad that they tag me as male. Who knows. My passport and ID both have F for my gender, so who knows. Like I said, I'm thankful that I've yet to experience any issues with the TSA like many other transgirls have. 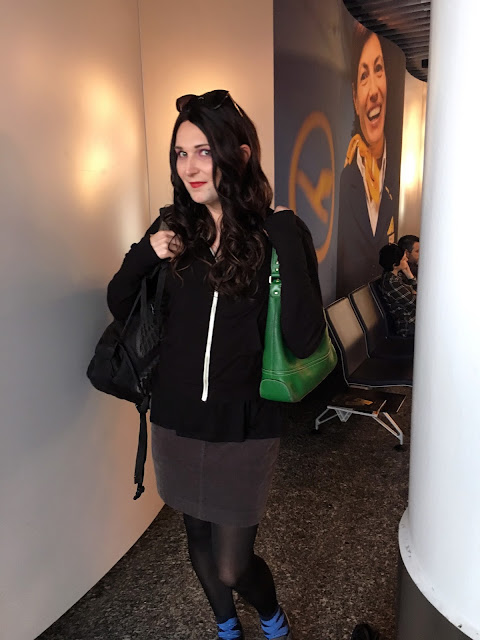 Now, eight hours in a cramped tin can isn't my favorite way to spend time. But, for this trip I was less worried about being uncomfortable and bored, and more worried that a long plane trip would leave looking absolutely horrible upon arrival. We were departing NYC in the evening and arriving in Germany in the morning our time, but really early afternoon local time. I was worried my makeup would be smeared to hell and my beard hairs might be showing too.

After eight hours, I hit the restroom in Frankfurt and....hmmm...yeah, my face wasn't exactly looking its best. My eyeliner or mascara had smudged so I had dark circles under my eyes, my lip color was all worn off, and my chin was looking a little darker than I would've liked. So, I quickly touched up my makeup. I figured a quick touch up would be okay to get me to the hotel. 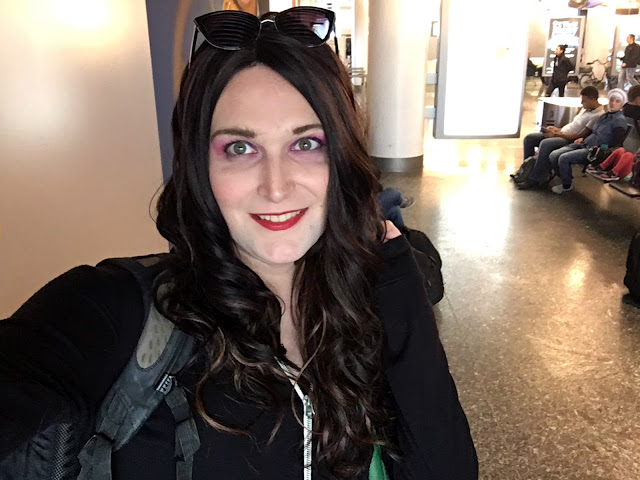 Being a transgender traveler is, I guess, not too much different from being a cis traveler. Getting there is less than 1% of the fun, but hey, you've got to get there, right? Plus I finally got a stamp in my brand new passport, so that was nice. 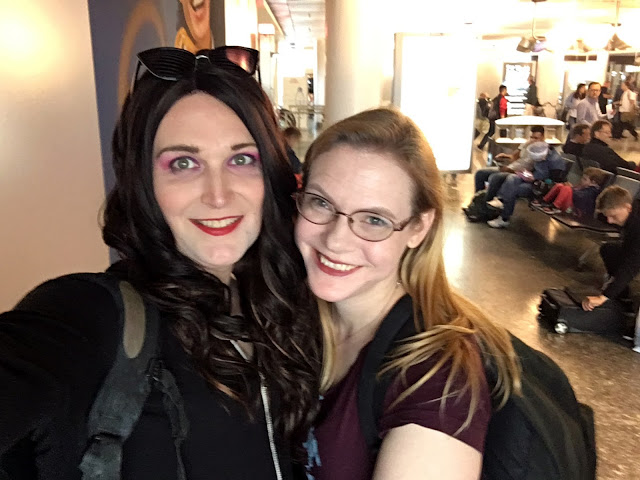 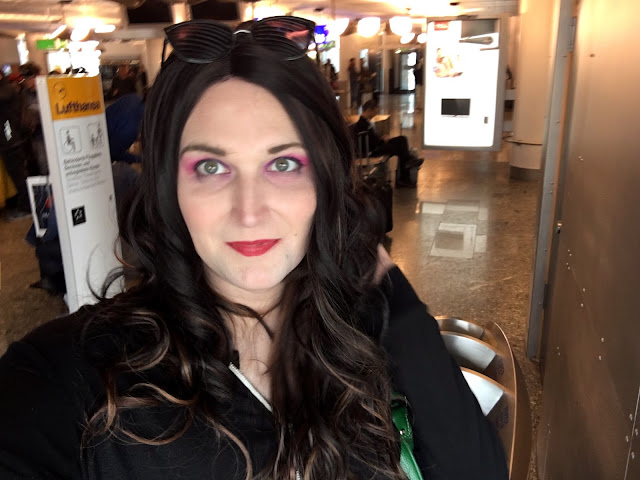 Three or four hours after setting down in Germany we landed in Berlin. We had finally made it to our destination! Tagel airport is crazy because there's no U-bahn station there. Of course, being the stupid tourists that we were, we assumed that there MUST be an U-bahn somewhere in the airport. So we spent a fruitless forty minutes looking around, hauling all our gear up and down the arrivals terminal, until finally we gave up and went to the info counter. No, there is not an U-bahn stop at Tagel. But there is the TXL bus.

So we took a bus all the way across Berlin to Alexanderplatz, which was basically like the Times Square of East Berlin back during the communist days. Our hotel was in East Berlin, in the neighborhood of Prenzlauer Berg. We'd been told by my friend who lived in Berlin, that East Berlin was way, way cooler, so we definitely wanted to be in the east. 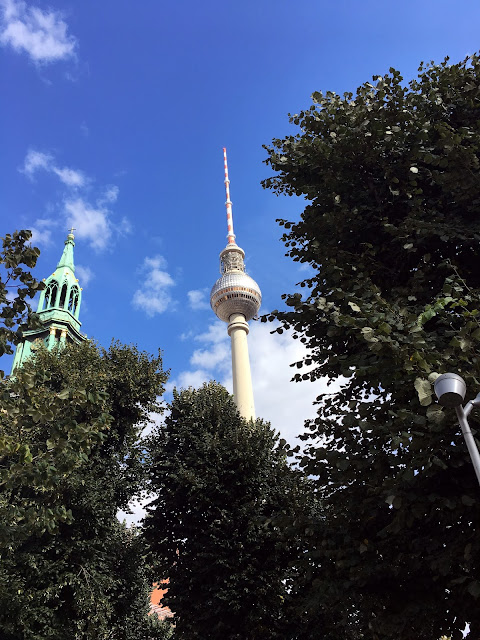 When we got out of the bus at Alexanderplatz, it was beautiful. The weather was perfect, albeit a little chilly. But after almost 18 hours of travel (counting various trains, busses, and aircraft), we had finally made it to Berlin. I snapped a pic below of Kath, looking super happy. She has made this face only once before...on the first day we got our dog. 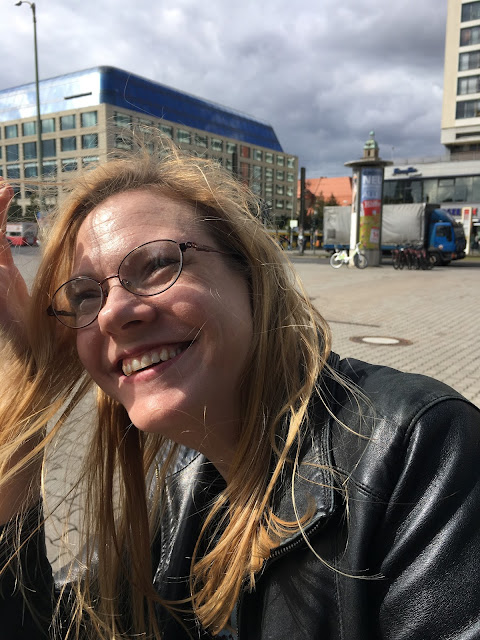 Our hotel was a ten minute walk from Alexanderplatz, and as we didn't understand the U-bahn or the trams, we decided to walk. See, in NYC, there are multiple MetroCard machines at every station so it's easy to get a card. In Alexanderplatz, a major hub where seven train lines meet, we eventually found exactly one machine. It turns out that you don't even need a card to get on the trains or busses. It's all on the honor system. The whole time we were there, we bought tickets, but we never got asked by an agent.

One of the reasons I think Berlin is so nice is that there's a sort of social understanding that we will all follow the rules. It just makes the city so much nicer than say, New York, where we often can't have nice things because of what a few jerks will do. Like in Berlin there are vending machines on the U-bahn platforms, but in NYC they'd be vandalized and torn apart. So, like gun control, separation of church and state, sane ideas about birth control, and universal healthcare, we just can't have nice things in America. 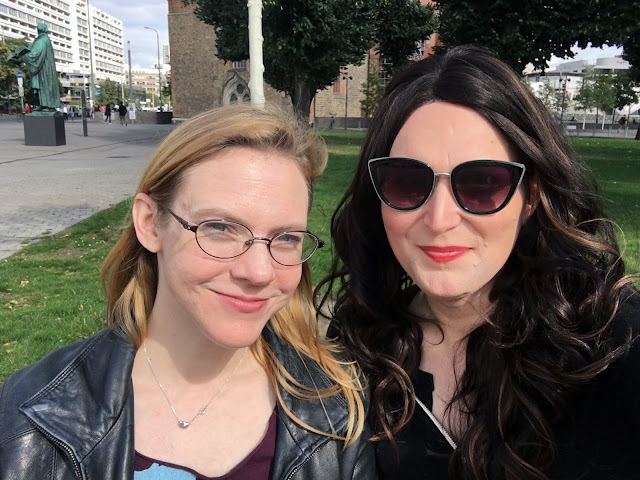 Well, we got back to our hotel and freshened up. It was late afternoon Deutsch zeit (German time), and we had been up for way over 24 hours, but we didn't want to get jet lagged. So we decided to go out, explore, and may be find some good traditional German food for our first meal.

Took a long walk around Prenzlauerberg and Mitte looking for German food and just experiencing Germany. We fell instantly in love. We kept looking for authentic German food for our first meal, but it turns out there is no German food in Berlin! Seriously. It's kind of crazy, but there are more German restaurants in NYC than there are in Berlin. I think they all must have gotten tired of wursts and moved on to doner kebobs and Vietnamese food. After a long while, and some Googling, we were able to locate a traditional place. It was mostly deserted and a little like an old man bar, but we had some beers and enjoyed our first German meal. 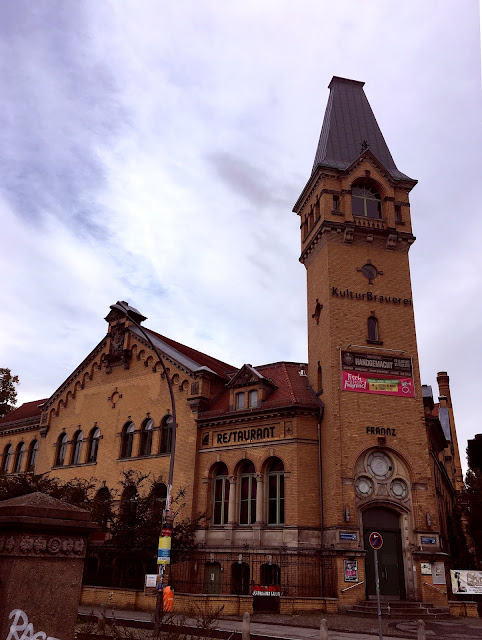 We wandered a bit more, debating how early would be acceptable to go to bed. We wandered around a while more, visiting shops, eating Haribo, and wandering around the Kulturbrauerei Berlin, which used to be a gigantic brewery but is now a collection of restaurants, museums, galleries and bars. Unfortunately, it was still early, so we had another beer at a mostly empty outdoor bar and took it all in before heading back out to Mitte to visit more stores and see more Berlin. 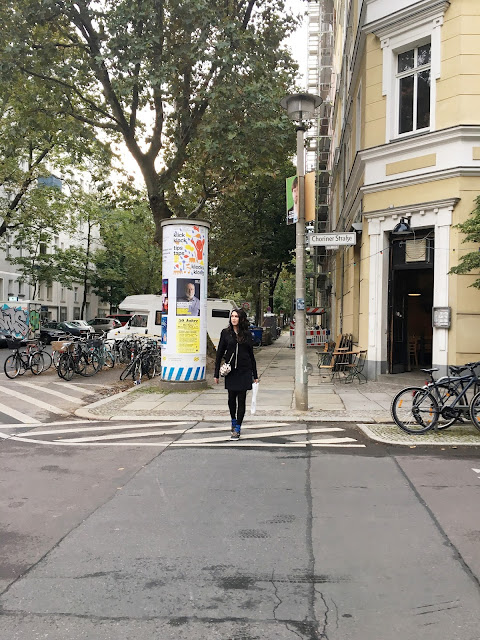 We'd been up for almost 40 hours at this point, but tried to push ourselves to 10pm Berlin time so we could avoid jetlag. When my head finally hit the pillow I had an insanely restful sleep. And was up and ready for day 2! 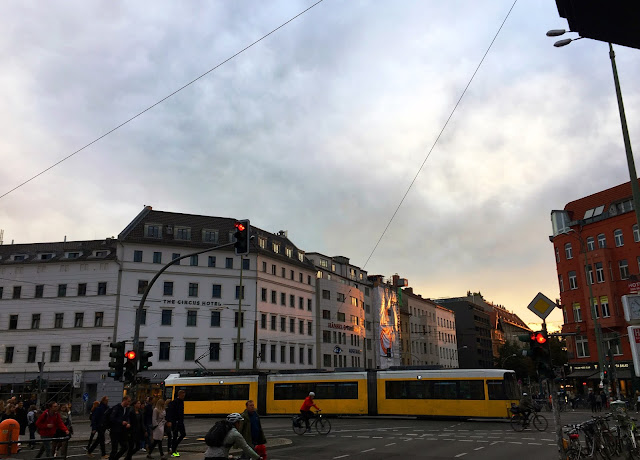 Posted by Faith DaBrooke at 9:49 AM