The Very First Time I Ever Went Out as a Girl 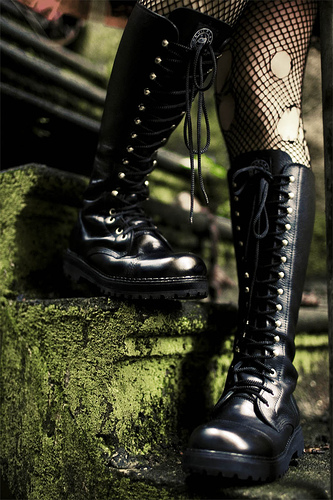 My first real time going out in public I wore combat boots.
Yes, I literally wore combat boots. They weren't even nice combat boots and were actually pretty torn up and nearly falling apart. They might have actually been in Vietnam. They were definitely on the ground in the DMZ in Korea. They were real, genuine, bona fide US Army issue combat boots and I wore them with a tight leopard print dress, fishnets and a $20.00 brunette wig with bangs.
Honestly, I'm not sure how the conversation exactly got on to the subject, because the truth was that I was supposed to be tutoring my friend Michelle. I was sixteen and so was she, but I was two grades ahead in school because I had been skipped and hence why I was tutoring her. For a while, up in her tinfoil lined bedroom (which was an homage to Andy Warhol's Factory) we went over history or science or whatever subject it was, but then, somehow we ended up at the point where she asked if she could dress me up like a girl.


Of course, I had been secretly dressing up since I was three, stealing my little sisters' clothes or putting up little argument when she tried to dress me up. Once at the same age, I naively asked my mom the difference between boys and girls, and my mom, perhaps with a bit of a shaky voice, ad-libbed that girls wore dresses and had long hair and that made them different. That conversation may have been the direct reason why I remember being three or four, standing on the bathroom counter, wearing one of my sister's dresses and attempting to brush out my short hair (believing that one need only brush it to make it long). That would make me a girl right? Of course nature doesn't answer wishes so casually.
So, throughout childhood and into my teenage years I would steal my sisters or mom's clothes and wear them. We had a "yard sale" box in my basement and that became my first shopping experience. These clothes were squirreled away in a tackle box I kept in my room, because it was the South and boys had tackle boxes for fishing lures or whatever it was that boys were supposed to have.
As I grew older, I secretly lamented that my sister was such a tomboy; interested in sports, ROTC and had only the bare minimum of dresses, skirts and makeup. Luckily she did have friends, and when a friend of hers spent the night in high school, I was rather excited at my one and only opportunity to don a genuine cheerleader outfit, though I only did it for a few minutes, in the privacy of the bathroom, while pretending to take a shower. Of course I was sure to dunk my hair under the faucet before emerging from the bathroom in order to provide at least some evidence that I was showering and not just looking in the mirror, pretending to shout "Be aggressive, be be aggressive!" in front of my entire school.


"Let me dress you up like a girl!" Michelle said and I think I at least pretended to be disgusted by the idea. I think I must have put up at least an iota of defenses before giving in. Unfortunately, my friend Michelle was also quite the tomboy and pants-wearer and thus had only a couple of feminine articles. Still, I jumped into them excitedly when given the opportunity. She did my makeup and I think I probably looked like someone who had failed out of clown school, but it was fun. For once I had found an outlet! Plus her mom had size 10 shoes and lots of nice ones at that. It was so nice to finally be able to share my hobby. I had an outlet! Of course that outlet was one friend's bedroom, but still it was a start.
This was 1996. It was a good time to be a teenager; Animaniacs and Batman: The Animated Series taught us to love animation after decades of Hanna Barbara, the internet was in its early ages and giving us access to song lyrics, chat rooms and multi-user dungeons, and on the MTV a sexy redheaded siren named Shirley Manson redefined for me what femininity could be. Oh my god, I wanted to be Shirley Manson! I wanted her makeup, her clothes, her hair, her attitude, her boots! I wanted to be feminine and strong and sexy and dang it, I was going to try. Plus I wanted her boots!
So, now out to my female friends (of which I seemed to have a gaggle), I started shopping at the local mall, particularly the Body Shop, which featured only the finest garments for the discriminating teenage slut. With my money from my lawn-mowing and weed-eating jobs I picked a super tight, sleeveless, super short leopard print dress that no one outside a music video should ever wear, and a matching set of black underwear and a bra. I even tried it on first. On a trip to Wal*Mart I bought my own makeup; blue eyeshadow, black eyeliner, bright red lipstick, equally bright red blush and super white foundation. Spencers Gifts is where I think I bought my first fishnets. But I didn't buy shoes, because I wanted boots like Shirley Manson's. I wanted nice big, strong powerful sexy boots like she had. But, stores didn't seem to sell those. So, I took my dad's combat boots and figured those would work. Why not? Boots are boots right?
One exciting Friday night, my female friends and I gathered over at my friend Crissy's house, where the girls all helped to doll me up. I had my leopard print dress, with gobs of toilet paper for fake breasts, my sexy fishnets on my newly shaven legs, tons of shakily applied eyeliner, big blue trailer park eye shadow, smears of red lipstick and gloss and a raggedy chestnut wig. Of course, I didn't think to pluck or shape my eyebrows, so those sort of looked like Noel Gallagher's (if you catch that 90s reference), plus my arms were good and hairy too. And to top it all off, I wore beat up old combat boots with my fistnets.
And I was going to go out and rock it! And where else is a young, sexy, bold transvestite to go on her first night out? That's right, a family-friendly casual dining Mexican restaurant!

Yes, we went out for enchiladas and I have no idea how ridiculous I must have looked. I have no idea what the Southern Christian Republican families must have thought as I walked by in my giant combat boots and slut dress and took my seat at the booth to dine on some reasonably priced Tex-Mex fare. Honestly I don't remember any comments (even when I took the time to excitedly pee in the women's restroom), but I may also have just been too excited to even notice the stares.
But it was a good night. I got out there and even though I looked ridiculous, I made it through the night and did my best. Afterward we went to the mall, where I did have some rednecks and ghetto guys laugh at me, but I was able to shake that off because I at least thought I was looking pretty hot. Eventually, I would get better a makeup, get better clothes and find better places to hang out (though I am still friends with some of those girls who got me out there). Eventually I would get enough practice to get super comfortable in a female role, but you always have to take that first awkward, embarrassing step. There's always that first terrible, horrible, awkward embarrassing step into the unknown, into that great big world out there.
So I would say to everyone out there, take that step, come out to a friend and get out and rock it and be fearless and even if you can't be fearless just fake it. Sometimes we're all just faking it and you're not alone. You are definitely not alone.