My First Time Out in NYC 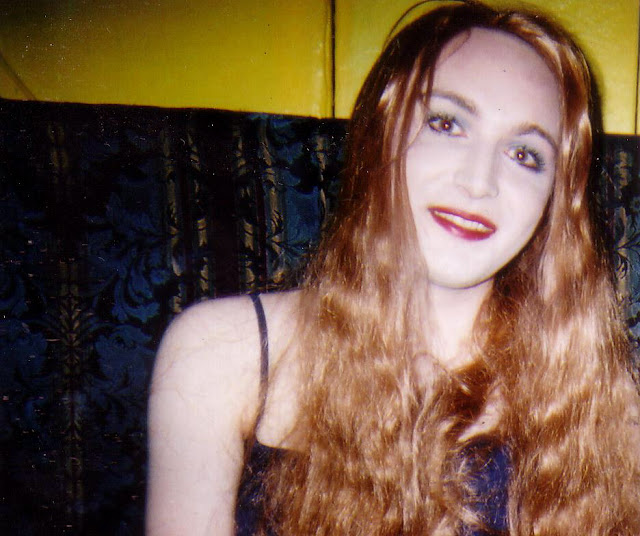 My first time actually going out dressed as a girl I went out my front door and then walked as quickly as possible to the back door. I must have been twelve or thirteen. Okay, that technically counts as "out" because I left a structure. It wasn't really going out though, as I didn't leave my yard. My first time going out out involved a rather short trip to the Augusta Mall in fabulous Augusta, Georgia. On that occasion, I let my friend Michelle dress me in a black crushed velvet dress from K-Mart and a pair of her mom's high heeled shoes. Michelle did my makeup and we proceeded to the mall. We proceeded to walk into the mall, past the food court and then into the main area before I chickened out and declared that we were done with the mall. That definitely counted as "out" but it was just a toe dipped in the ocean.

With a visit to the food court out of the way, I dared to venture out a few times in high school, mostly to The Colosseum, the one and only local gay bar. There were a few times I went out in college as well. But no pictures of those outings are known to exist.

On the other hand, for my first time going out in New York, I absolutely wanted to have photos to remember. Of course this was 2002 so instead of a digital camera or a phone, I went down to drug store and picked up a disposable camera. Remember those? Like you had to drop off the film and wait a week to pick up your 34 pictures and hope they came out okay? Then you'd pick your rotary dial phone and call your travel agent to fax you your tickets for a Pan Am flight to Czechoslovakia. Okay, maybe not that bad, but we still didn't have digital cameras yet.

I had just moved up to New York from Georgia just a few months prior and luckily my friend Michelle already lived here. And with no parents or family or relatives or people who knew my family around I was eager to get out. I wanted to be a girl in the big city!


Now, I had brought some clothes and makeup with me so I was set there. Okay, some of those clothes were literally from Wal-Mart, but hey, I didn't have many options in the South, plus I was on a restaurant server's salary. But they'd work.

Then one day I was out walking down the street and passed by a beauty supply shop with wigs in the window. There I saw a beautiful long blonde wig that I immediately fell in love with. Previously I'd always been a brunette, but I figured what the hell. It's a new city and it's a new life and it's time for a new hair color too. So I became a blonde!


Now in Georgia I had only really ever gone out to gay clubs so that was my comfort zone. Gay clubs felt safe. If anyone ever clocked me than it'd be okay. So we decided to go to Lucky Cheng's, a famous drag queen themed Chinese restaurant.


We took a cab from Queens to the East Village as I was still afraid of taking the subway while dressed up. Instead of eating Chinese food, we headed straight into the bar and ordered some drinks. And almost immediately I attracted attention.

Now,if you're not sure exactly what type of clientele general frequent the bar at a drag queen themed Chinese restaurant on a Saturday night in November, let me go through the types:


Guess which ones decided to talk to me?

Yeah, I ended up with a bit of unwanted attention throughout the night.  One guy who we let sit with us because he bought us a round. Now, that's not the kind of thing I would do, but Michelle insisted. I think a part of her liked that I was getting this attention. It was entertaining in a way. Michelle was the first person besides my sister to dress me up and send me out into the world and I think she thought of me a little bit as an art project. I was to be the Candy Darling to her Andy Warhol. So yeah, we let creepy guy #1 sit with us. That guy was mostly just awkward for awhile until he decided to get grabby under the table tried to wrap his hand around my thigh, under my dress. No, sir!

Not quite sure exactly what to do in that situation and definitely sure I wanted that situation to end, I declared that I had to hit the bathroom and was thankful to have a ladies room to head off to. Now, the ladies room at Lucky Cheng's was also where the queens hung out, so it had a nice relaxing party vibe to it. People may have been doing coke. As this was before the smoking ban, I was definitely smoking cigarettes in girls' room. And Michelle and I took some photos. There were 34 whole pictures on that disposable camera. Click away! 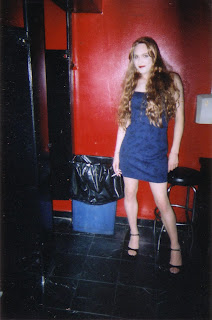 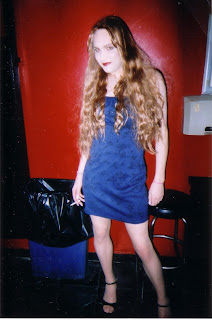 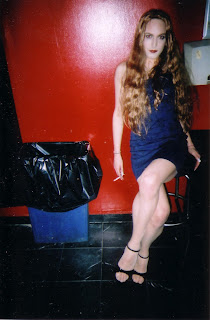 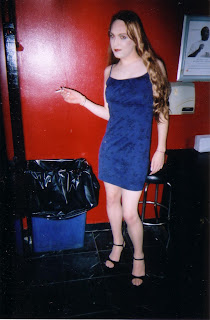 Creepy dude #1 left soon after. Thankfully. Unfortunately, that left room open for creepy dude #2 to come over. Now this new guy was one of those socially awkward people who takes four minutes to figure out what to say each time they feel like speaking. And despite the four minutes that they've had to think about it, they invariably say something strange? It was like this:

Creppy Dude #2: Didn't I see you. On the issue. On the last issue of the cover of Cosmopolitan?

Creepy Dude #2: What if I told you that I said you were sexy?

Creepy Dude #2: You're super sexy. Did you know that?

Me: I have to go to the bathroom. BRB.


Ugh. So yeah, creepy dude #2 then found me outside the bathroom and  tried to make out with me, which did not work out well for him, I am happy to say.

Eventually the creepy dudes all departed and Michelle and I did some karaoke. I did "Special" by Garbage, a song that I am in no way capable of singing. I still sang my heart out and looked good doing it! 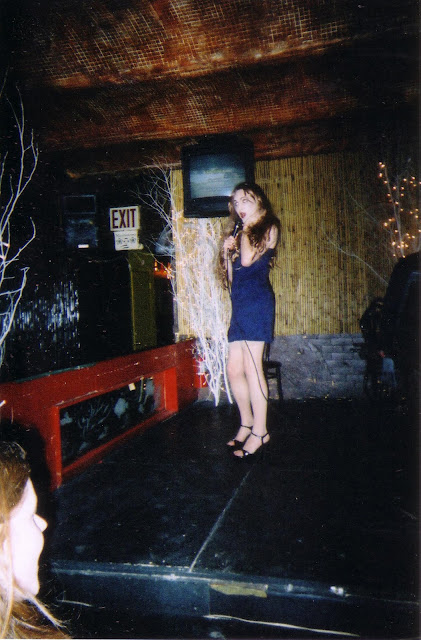 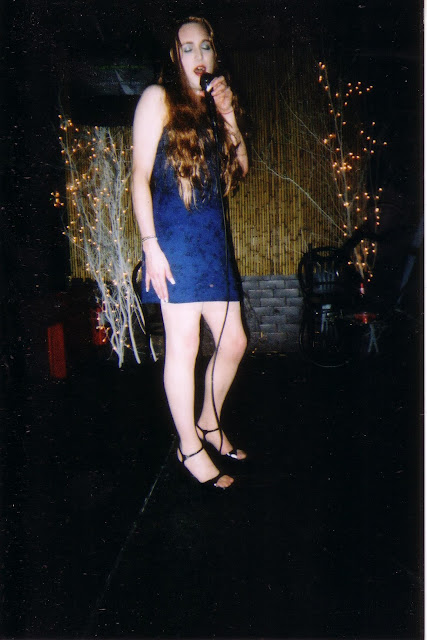 But at least I can say that my first time out in New York I got up on stage and performed at Lucky Cheng's. I can also say that I took a helicopter ride with Emma Stone, but that would be a lie. The Lucky Cheng's thing is at least sort of true.

Afterward Michelle and I  headed outside and took some pictures on the street as we tried to hail a cab. 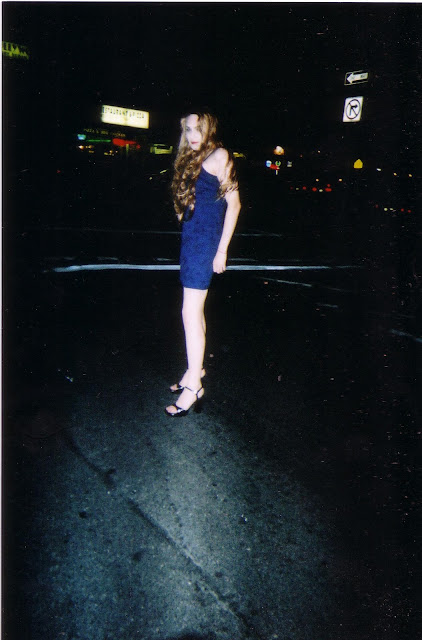 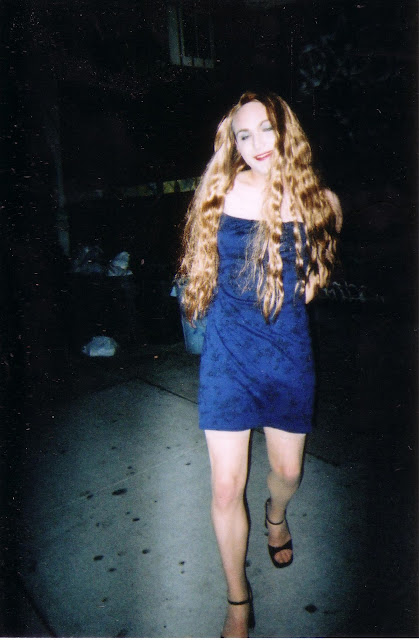 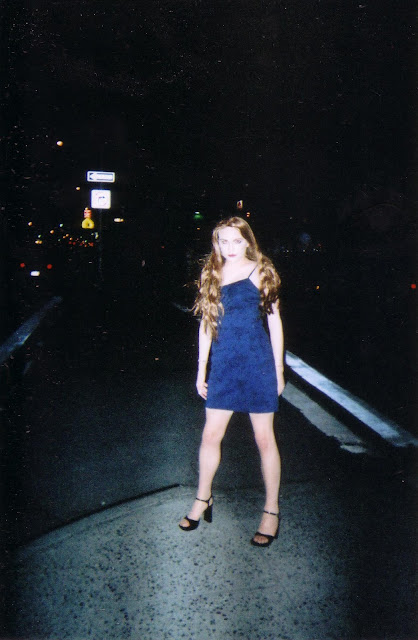 I do remember some passersby yelling "looking good, girl!" or something to that effect. It's nice to have some feedback, you know.

It was a fun night. I had gone out in New York City and had a great time. Most importantly, I was starting to realize that the big, bad city wasn't so bad after all and that I could go out and have a great time as Faith. Heck, it wasn't to long before I'd be courageous enough to throw on a dress and hop on the subway.

But that's another story.
Posted by Faith DaBrooke at 6:12 PM