DUMBO was once called Fulton's Landing, which is where Robert Fulton's first steam powered ferry used to dock in Brooklyn. Sometime later a clever realtor renamed it, rebranded it really, as DUMBO which was an acronym for Down Under the Manhattan Bridge Overpass. It's a terrible name, because no one ever called the place that. Because there isn't an overpass there. When people talk about overpasses, they generally mean those that go over highways, not the ramp that leads up to a bridge. Which means that someone came up with the idea of naming it after a Disney elephant and then came up with something that fit that. Ah well, no one asked me, so DUMBO it is.

It's quite a popular spot for photographers and professional photo shoots. You can walk through the neighborhood and literally run into two different catalog shoots, a commercial being filmed and no fewer than four brides getting wedding photos done with a Manhattan background. And that's just your average Tuesday.

So yeah, why not me as well?

My partner was super nice and offered to be my photographer, especially since I had borrowed a nicer camera than the one in my iPhone.

I spent a while trying to figure out what to wear as I definitely wanted something I hadn't recently worn. Plus I also have some 5" platform heels that I've had for years but almost never worn. Mostly I like wearing flats so I fit in better. Being a giantess just draws attention I'd rather not have. But, for a photo shoot, I figured it was a great time to rock the heels.

Now they're black, so my new yellow dress was out. And they're fancier, so my more casual dresses wouldn't work either. Thinking about it, I figured my classic Calvin Klein little black dress would be perfect. It was my coming out dress and it's been almost a year since I've worn it. It looks great on me, but this past year I've been mostly trying to be more casual and less dressy (again, just trying to blend in as a normal, everyday girl). And since I was going out, I figured I'd try and go all out on a smokey eye look. I tried to use a powder eyeliner for the area just along my lashes, with a liquid for the wing. I think I went a little too a far, but you guys can let me know what you think.

So, LBD, dark black eyeliner and 5" heels it was! 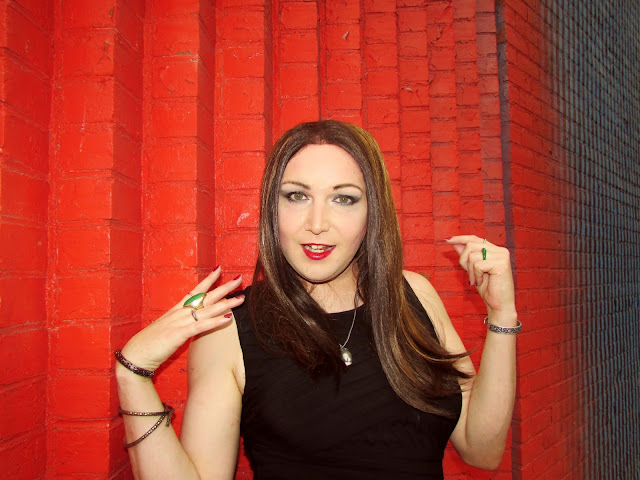 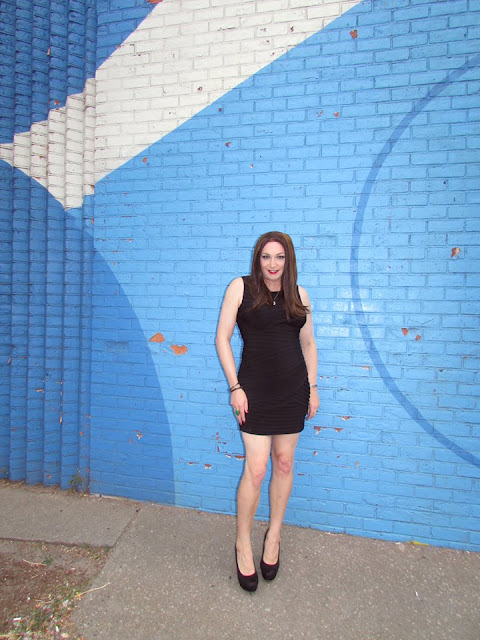 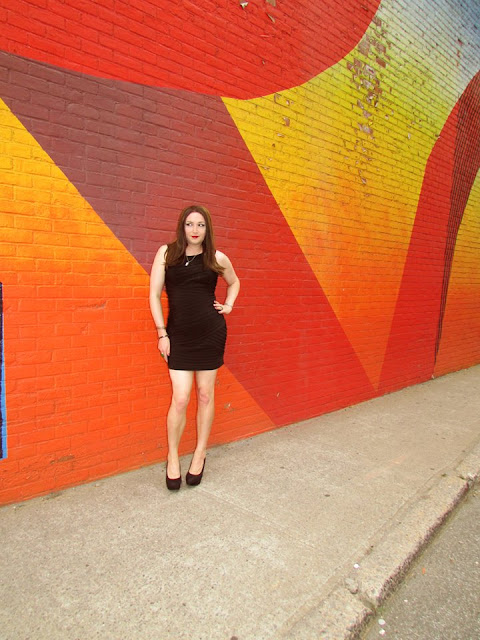 First stop was what I call "The Color Wall," which is a long brick wall covered in art, but dominated by a long gradient that goes through all the colors of the spectrum from red to yellow to blue and green. It's a popular photo spot. So popular that we were actually sharing it with two other parties of casual photo-takers.

Then we went on to the more industrial area of Brooklyn.

Posted by Faith DaBrooke at 9:49 AM