Saturday was the second day of my girl trip. After waking up early, I did my makeup and got ready. Our plan for the day was to go out shopping at a number of places around Columbia, SC, including all the boutiques around Five Points. Then we'd grab some Southern food for lunch (maybe that famous South Carolina mustard-based barbecue sauce), then we would meet some of my hosts girlfriends at a cool bar in Columbia and do a girls' night out. A good plan. But, you know what they about plans.

I wore my favorite dress, a black waitress dress I got at H&M. For my hair, I had brought an older, more beat up version of the wig I would wear out. This one was kept in a pony tail and used when I slept. So, my very first thing in the morning, before I could let anyone see me, was to duck in the bathroom and do my makeup and hair. Then, duck back into the bedroom and get dressed. Then, after all of that, I could have coffee. The nice thing is that I have my whole prep down to about thirty minutes or less at this point.

But then I did have some coffee and was ready to go out!

Our first stop was not Nordstrom or Macy's or even Wal-Mart. No, it was some random yard sale. This was to be my first real experience with the denizens of Columbia, South Carolina. Now in NYC, I've been out a thousand times and am quite comfortable just walking around in public. But, I was unsure exactly how people in the South would react. Would they give me weird looks, make fun of me, rip my wig off and punch me? I had no idea.

Well, it turns out they didn't react at all. At least as far as I could tell. I walked around the yard sale, full of some salt-of-the-earth Southerners, looked through someone's unwanted household crap and got no reaction at all from anyone. And my first thought was "Weird." It was the same reaction I get in NYC, i.e., no reaction at all. Does that mean I pass? Does that mean I could pass in the South as well?


The next stop was Columbia's Five Points area, which isn't the downtown, but just an area of shops, restaurants and bars near the University of South Carolina campus. Now, I had been warned not to go there by people online. But, I had a local with me, so we headed down there. Five Points has a lot of nice little boutiques and the kind of bar/restaurants you find in college towns, and it seemed totally nice. Of course, we were there during the day time. Apparently at night you can get shot, beaten, robbed, etc. down there. Thankfully the sun was out.

We hit a bunch of little boutiques and shops and checked out a lot of clothes. Behold! 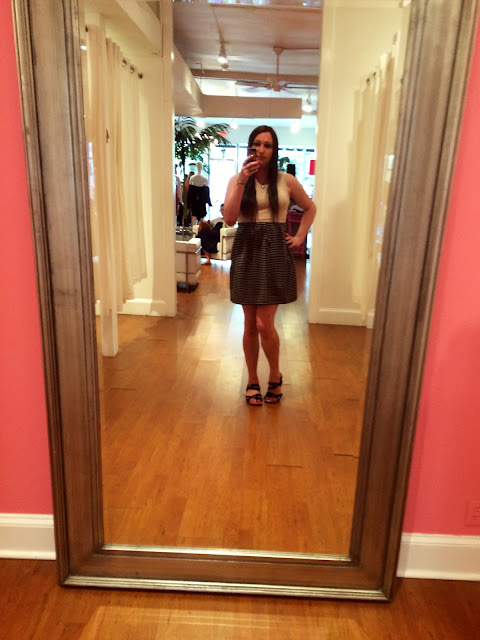 Okay so maybe I'm a little regionist, because I figured that while I could go out in public in New York okay, the South would be, well, a shit show. I imagined sales clerks giving me angry looks or threatening to call the cops if I dared to go near the ladies' fitting rooms. Instead, I got helpful sales clerks offering to find me alternate sizes, offering to set me up with fitting rooms and lovely sales clerks complimenting me on my taste, my nails and clothes. It was great.

Our last stop for shopping was actually LOFT, which is funny, because while I do love LOFT, there's also a shop like two blocks from my house with all the same clothes. But, they had a sale with 40% off everything in the store! Woo hoo! 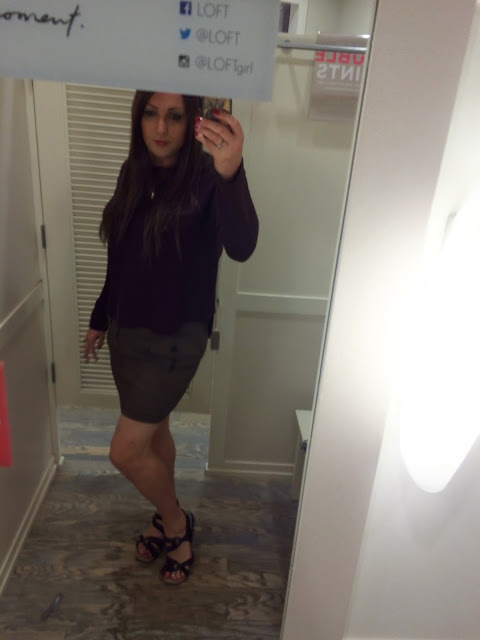 And I got a dress that I'd had my eyes on for a bit and was waiting for it to go on sale. The sales staff at LOFT were super nice as well. Of course, they had a deal where if you spent $50, you got a $25 gift card and my dress came out to $47.00. Erg. They had clearly planned it that way, since most of their dresses are $80 and $40 off comes to less than $50. For a little bit I looked around the store for something else to buy, but a $6 pair of socks was the cheapest I could find. And at that point, I was like "LOFT, I love your clothes, but I clearly see what you're doing here. You're trying to trick me into buying more so that I can come back in a month with my $25 gift card to buy when most of the stuff in the store is over $25." No thanks. So I just got my dress. Though it is one I really liked.

We had lunch at a local place that had hundreds of TVs all covering college sports. Oh, I forgot to mention, the South is super religious. Oh, you knew that? Well, no. Their religion is not Christianity. Sure, they like Jesus and all, but their real religion is sports. And of all the sports in the South, the most holy is apparently college football.

When my friend Bethany was getting dressed, she had to be sure to put on the correct colors. She thought it was funny that I compared it to gang colors, but seriously? It's really like gang colors. She was literally afraid that people would judge her poorly for wearing the wrong colors. You can't wear blue if the local team is playing Kentucky, you can't wear read if Clemson is playing Georgia. I don't know. It's insane and I'm happy that in Brooklyn, I can ignore sports entirely. I think Amy Schumer said it best in Trainwreck:


No offense. I just think that sports are stupid and anyone who likes them is just a lesser person.

Couldn't have said it better.

Even the little boutiques, the ones full of dresses, scarves, tops, high heels, skirts, earrings and bracelets, had little displays set up for the different sport team colors.


While I had grown up in the South, I had blocked this particular part of its culture out of my memory. But here it was again. Ah well. I left the South for a reason, didn't I?

We had lunch at one of those restaurants that all college towns have, you know, the place with beer, a deep fryer and no fewer than fifty three televisions showing sports. The waitress was nice and greeted us with a "hello, ladies." That always makes my day. I love female pronouns. I love it her and she and hers and ma'am and miss. That just sends dopamine straight to my pleasure center.

Now, the waitress did card me, but luckily I had my NYC ID on me. It's great because I went and got it in girl-mode, so it has my picture as Faith and lists my gender as F. Unfortunately, it has my guy name on it because they wouldn't let me change it, but it was still a pretty good thing to have.

The best part about the restaurant we ate at, (Pawley's Front Porch now that I Google it) was that for the first time in two days, I found a single-use restroom!

Now, I've used ladies' rooms many times, but on this trip, I had yet to encounter a single person restroom. At the airports in NYC and Charlotte I had used the huge restrooms and had no issues (I even had the Charlotte restroom attendant greet me nicely and wish me a good day). Between Charlotte and Columbia I stopped at a Chick-fil-A in Rock Hill South Carolina, where I had also had no issues, but it was nice to just have the relaxation of a single-use restroom. I could relax, take my time, and really make sure my makeup and hair were perfect.

The food was okay. Nothing too great. For the trip, as long as I had local BBQ and Chick-fil-A, I was fine.

But, as we headed into the evening of my second day, I think I was starting to be get really good at being a woman in South and was really looking forward to the girls' night out at a cool bar in Columbia.

This was actually the low point of my trip.

That did not happen. Yeah, it pissed me off.

One of Bethany's friends ended up cancelling. Another gave her a "maybe," and she declared that she was tired and didn't want to go out anyway. Besides, she reasoned, we'd have to figure out a ride to the bar and a ride home and that would cost money, and she was happy to just stay in.

This is why I live in NYC. Because I can walk out my door and within a few blocks I can find several different bars and restaurants. We can have drinks, food a good time, and still walk home. It's no big deal.

So we went to Publix, got food and some local craft brews and headed back to her place to stay in for the night. And at Publix, the strap on my comfy sandals broke, leaving me to sort of shuffle on back to the car as best I could with one sandal half-off. Fun!


Instead of a night out on the town with some girlfriends, Bethany went to bed early and I sat in the guest room playing on my phone until I got tired enough to sleep.

So yeah, day two of my trip was kind of a let down. But, in a way it was pretty good. I got to spend the day as a girl. I went out all day and interacted with many people and everyone was super nice and polite. No one harassed me, no one was rude, no one misgendered me and I got to be a girl for the entire day.

And a pretty girl at that!

Let's see what Day Three has to offer...

Posted by Faith DaBrooke at 9:09 PM