Coming Out: Part One


In September 2013, I came out to all my friends (or at least those who were at my house that night). It's not that I had necessarily been trying to keep it a secret, but let's face it; crossdressing, being transgender, being a gender rebel (call it what you will), is a little bit on a the "weird" side of things. Yes, it's is the 2010s (or whatever we're going to call this decade), and people are generally more accepting, but even if people don't see it as "wrong," it is still a little bit outside of the norm. And not everyone wants to be outside of the norm. A lot of people just want to be in the norm, happy and right  smack dab in the middle of the bell curve.

Normal is never a word that ever really applied to me.


For a while, my friends and I had talked about wanting an excuse to get dressed up in our best and hit the town for fancy cocktails in some swanky bar, but on a budget. So, then my partner and I hit up on the idea, that rather than going out and paying $14 for a specialty cocktail, we'd just host our own cocktail party. The rule was that everyone had to dress up in their finest, and that there would be a contest for the best original cocktail invention.

Here was the text of the invitation we sent out:

"Put on your most elegant dress, you best suit, your fanciest spats and finest finery and come over and enjoy a unique and delicious cocktail. If you wish to win the grand prize, invent your own unique cocktail concoction and enter it into the contest. It will be a grand night and perhaps even involve a moonlit stroll down the world-famous Promenade to view New York Harbor the and electrically lit buildings of Manhattan Island.

World's Greatest New Cocktail Official Contest Rules:
Each person may enter one cocktail creation. It must be a unique and personal creation, involve at least one intoxicating spirit or agent and one additional ingredient. Hosts will provide lemons, limes, ice, standard Whiskey, Bourbon, Rum, Vodka and Gin, cutting board, knives and spoons. All other ingredients must be provided by the entrant, in sufficient amounts to provide at least four standard servings (32 total ounces). Contestants must provide their own specialized tools (cocktail shakers, strainers, etc.). One 'standard' cocktail can be created for presentation, but for voting purposes, small cups will be provided.

Each of the two hosts will select their favorite and then all party attendants may vote on which of the the two selections they think is best. In the event of a tie, there will be an immediate mix off between the two finalists and a new vote (with one of the hosts abstaining to insure an odd number of votes). Winner decided by a simple majority.

Hosts will be excluded from entering the contest, but may choose to create their own unique cocktails for entertainment purposes only."

We spent a good $200 on basic liquor (we're not big liquor drinkers and actually still have many of these bottles). We made a ton of food including mini pear & brie sandwiches, mini roast pork & apple sandwiches, mini caprese sandwiches, macaroni & cheese balls, chicken and salmon skewers, homemade spinach artichoke dip, lots of veggies & hummus, and mini cocktail weenies (because those are super fancy). At the party store, we got black cocktail napkins, plastic martini glasses & flutes, the fanciest little plates and silver plastic ware they had on hand. There were votive candles all about the place and I even made a special all-classical music mix for the night.

Now, my only issue was what to wear?

When it comes to guys' clothes, I just don't have anything that nice, plus dresses are just so much more fun. So, I made the decision to dress up to the nines and to come out to the my friends as Faith.

It would be my first time going to Macy's (the first of man times).  But, I had a ton of fun and the staff were really nice. There, I tried on a few things, but settled on two; a black Calvin Klein dress and a red Ralph Lauren.


While I had been blonde all summer, I decided that it would be a fun time to try brunette. My natural color is a dark blonde or a light brown and I found a wig that looked great and was just a little darker than my natural coloring. 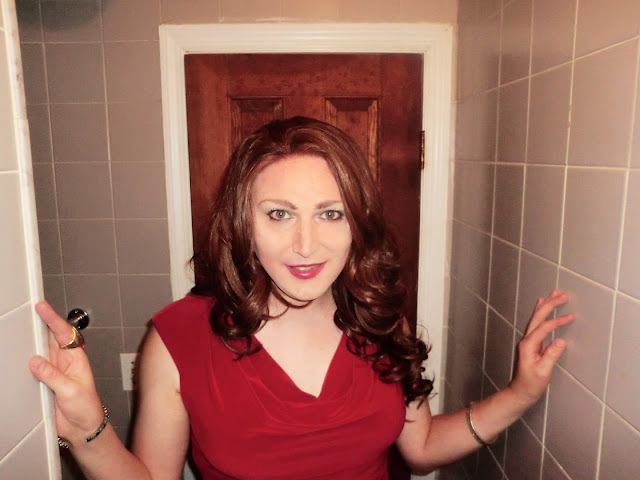 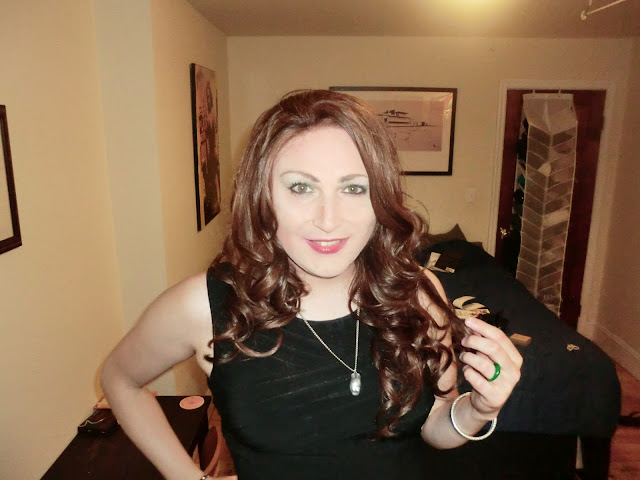 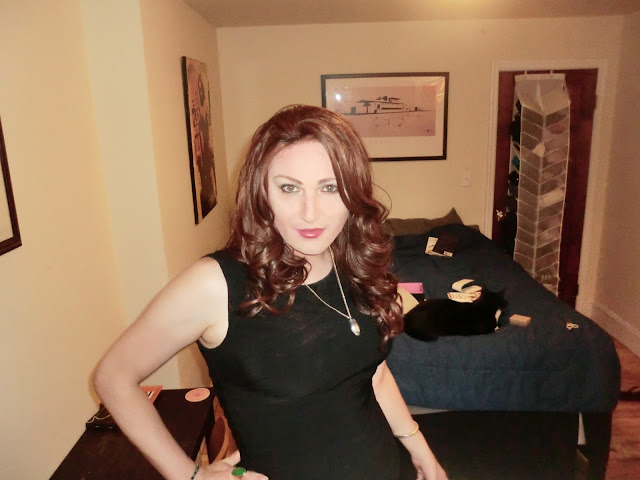 When it came time to decide what to wear, I waffled between the red and the black. The red had such a good feel and nice movement, but the black was so classic and sexy. In the end though, I went with the black. It's much more classy and plus the red had two drawbacks; firstly it is a sort of shimmery material that doesn't photograph well, and it's thin so you could see my nipples through it. Classic little black dress it was!

Next, I was planning to get my ears re-pierced. I'd had them done many years ago but hadn't worn earrings in a couple years. My partner suggested that before I do that I try and put an earring through to see if the holes were still open. And they were! Earrings are such fun accessories and I was excited to be able to wear them again.

Everything was ready. I did my makeup, had the perfect wig, a sexy little black dress, some shiny patent heels, I went and got a mani-pedi and some bright magenta polish on my nails and toes.

The food was ready, the drinks were ready and friends were set to arrive. What would they think when they saw me? I had no idea, but there was no backing out!